Why Chevrolet is Not Interested in Selling Aveo Anymore?

Due to the Aveo's struggling sales figures, last weekend I made a visit to Chevrolet dealership to find out whether the company is offering any attractive discounts on this car or not. The Chevrolet Staff attended in a courteous manner but it appeared as if they are acting either dumb regarding the car or really do not know anything about it at all. Because first of all – the sales person explained me the specifications and upon asking him the list of features – He mentioned only alloy wheels, power windows, central locking, airbag, ABS. That’s it! After I questioned that there must be something unique, you are selling this car, then he called another sales person to tackle over the situation.

Here the even funniest part began – this guy started all over again (with specs, features etc) and ultimately finalized the deal to settle with approximately Rs.30,000 – Rs.40,000 discount. And strictly no freebies. I went with the mind to consider Aveo if the deal would have been fair enough for a dated car like this, because personally I love the Aveo from heart regardless of its popularity or age in the market. Now, after a while when we were comparing it with Linea, Manza and likes – Eventually he went on doing gaga about both the cars, giving an impression as if he’s more of a Tata-Fiat Dealer rather than Chevrolet’s. Nonetheless, the biggest shock that I received is Chevrolet now offers only single airbag on top-end Aveo (whereas the website still shows two). In fact, many other value features have been silently phased out too, making it no-more a considerable deal (including top-end 1.6 variant). This simply raises a big question mark whether General Motors (or dealers for that matter) are interested in selling the Aveo anymore? Why not discontinue the product (And introduce new one, if you ever plan to) to prevent wasting the time of consumers as well as your efforts to beat a dead horse. It's just the matter that all I'm afraid about is new Aveo won't have as good interiors as the current version. Hope the company takes this more as a constructive feedback rather than a complain. Have a look below for the last three-month sales figures of Aveo and rivals. 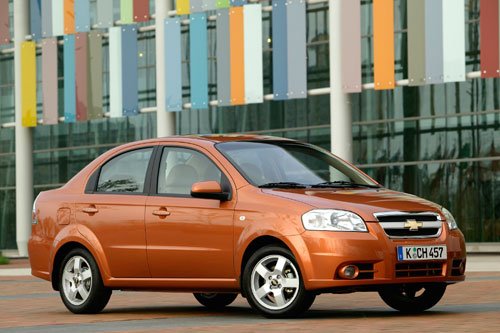 well fully agree with you ..gm is only trying to push aveo. they have two choices. they can reduce price and make it like fiesta classic or completely launch new one!!

I am not at all surprised at the callous attitude of Chevrolet towards the Aveo. Let's be honest, it never was a success, it didn't even come close to being a success. It never even sold in modest numbers. And now, for reasons best known to GM, they have decided to flog the dead horse and not bring in the next-gen Aveo (which is the Sonic and has already been launched in the U.S). And anyway, with the likes of the Toyota Etios, Tata Manza and the soon-to-come Mahindra Verito, I don't think anyone will really be interested in even checking out the Aveo. It's just past its expiry date, and now GM India would do well to end its misery, and bring in the new Aveo or maybe even re-position the Optra Magnum, just like Ford discontinued its old workhorse, the Ikon and brought out the Fiesta Classic. What say guys? [thinking]

Basically, the only factor where General Motors defeated with the Aveo was intense pricing. Heck, even the plain design comes much later. Yet I wonder that they still fail to understand the same, otherwise it could have done wonders.

amaan1994 said:
the next-gen Aveo (which is the Sonic and has already been launched in the U.S).
Click to expand...
The same Aveo (which sells in India) is also very much available in the USA too. As far as the Sonic is concerned, it is yet to launch in USA (Expected by September). Do have a look: 2011 Cars, SUVs, Trucks, Crossovers & Vans | Chevrolet

amaan1994 said:
..now GM India would do well to end its misery, and bring in the new Aveo or maybe even re-position the Optra Magnum, just like Ford discontinued its old workhorse, the Ikon and brought out the Fiesta Classic.
Click to expand...
Highly doubt if GM will ever price down the Optra in order to meet the level of Aveo. Though what they can do is to launch the New Aveo (Sonic) and continue selling the current Aveo sideways by positioning it a segment below.

their hatchback spark and now launched cruze is doing well for chevy which is why they never took intrest to relaunch their entry level sedan Aveo, if so it would have been a great success.

Chevrolet knows very well that this car is not doing anything good for the market but still they are willing to continue as long as people are buying it (Even if they are only hundreds in count). Also, the Chevrolet Dealer stated that they do not have cars in stock. It’s manufactured only upon once the order is received.

i feel if they relaunch it to compete with Etios,Manza and Dzire along with a diesel heart as well as petrol, it would surely create some news, its a good product with bad matketing strategies as well as shobby company attitude to sell it.

Chevrolet Dealer in Gurgaon is also ready to offer maximum discount of 40,000 on Aveo. But there is hell lot of price difference if purchased / registered in Gurgaon instead of Delhi.

Chevrolet has plans to launch Aveo Diesel. It will be the next launch after Beat diesel.

Are you sure about the news Vivian , that would be great! The Optra Magnum is too dated now and the new Aveo with a diesel engine under the hood and a good price tag should be good.

Vivian said:
Chevrolet has plans to launch Aveo Diesel. It will be the next launch after Beat diesel.
Click to expand...
Hi, Will Diesel Aveo have new shape or present one?

Chevrolet has introduced the CNG version in Aveo but that to be in entry level model.
Considering the CNG availability scenario
In metro cities they expect people to buy CNG with basic model? With no discount at all ?
If Chevrolet Aveo CNG available in all variants then it makes sense.

I have the latest (Delhi) price list of Chevrolet Aveo with me. Let me share it here.

Note: According to the dealer, General Motors has discontinued the Chevrolet Aveo 1.6 Engine variant.

Sales figures below for Linea, SX4 include diesel engine options, which form 70~75% of overall sales. Aveo needs diesel. Period. Then it will sell consistently 800 per month.