The carmaker has a presence in the hatchback segment with the Volkswagen Polo and is also competing against segment leader Honda City with its sedan Vento.

The carmaker is now looking for a product in its portfolio that can be modified to give the Toyota Innova some competition.

It has been reported that the company is looking at a number of vans to fit the bill. 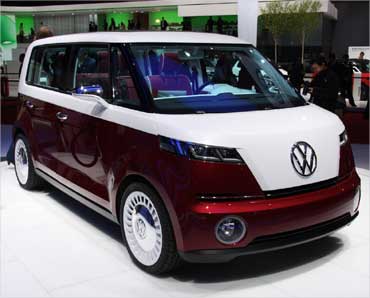 The carmaker has displayed a Microbus concept called Bulli at the Geneva Motor Show.

It is a six-seat concept and seats three abreast, both at the front and the rear.

For India a third row could make it a versatile nine-seater. However, there is no official word on it as it.

Re: Volkswagen(VW) looking to launch a MPV

I have seen the VW Caravelle on roads in India. May be VW will promote it more if at all they wish to launch that segment in India.

Re: Volkswagen Looking to launch a MPV

There are a few Caravelles serving as executive taxis in Delhi too. This van looks decent but considering what Volkswagen will price it, as seen from their current products range, hope they should bring something more better.

Re: Volkswagen Looking to launch a MPV

VW is doing good in India , i would say right time to cash in!


Maybe Raj can provide us some inside info about this!

its not going to be caravelle. its different i hope.