An exclusive spy-image of TVS Rockz by Indian Motos Blog, this bike was spied testing on the outskirts of Chennai city. Read more details in the link given below. 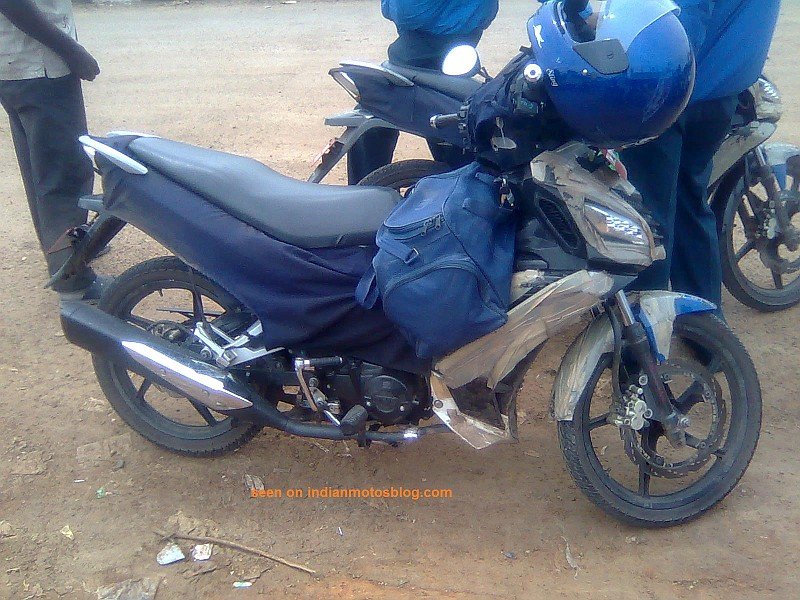 There are some interesting features mentioned in the report that the bike will feature but because of that the bike is pricey now!

It can be a good replacement for Flame!

headlight design is also looking cool and LED type maybe? this bike is one to watch out for!

Nice to see it, breaks are huge.

I guess it will be a tough competitor for XcD, twister and so on

@dileep look at discs on both wheels, i think this will be a performance bike similar to apache class. lets wait n watch

Hmmm yes but will the bike fall in the same segment as of Apache? I don think so! My feeling it will be a cool 125cc bike loaded with features! Will be a good replacement for Flame.
J

Looks like a cross between a motorcycle and a step through. Silencer seems to come from the flame, rear mud guards look like they are from pulsar, anyways the end result should be - good, reliable and technically sound product, that is what the customer wants. Keep the news coming on this bike mates.

cooldhaya said:
Hmmm yes but will the bike fall in the same segment as of Apache? I don think so! My feeling it will be a cool 125cc bike loaded with features! Will be a good replacement for Flame.
Click to expand...
125cc with rear discs! If this happens, its surely going to be a mouth watering deal. TVS never lets the pricey issue creep in.

well more spy pics of rockz! it has got apache rear lights with 125cc engine!

Lets hope it will be a success.Moto Scooter never been a success in India.I think Hero Honda earlier came out with one.Don't remember the name.

There are some changes found the pictures posted by 350Z & Umang

India’s fourth largest two wheeler manufacturer, TVS Motors will launch a new 125cc motorcycle to boost its motorcycle sales in 2012. The latest motorcycle from TVS is expected to hit the showrooms in the month of July or August. The company aims to regain its lost market share in motorcycle segment with the launch of this new 125cc bike. In the financial year 2011-12, TVS Motors lost its third position to HMSI (Honda Motors and Scooters India ltd.)

Mr. HS Goindi, president marketing, TVS Motor said in an interview with CNBC TV 18 that, they are coming out with an executive level bike with 125cc engine, which will be launched around July-August. He also said that the new motorcycle will fill up their motorcycle portfolio and will help them to grow their motorcycle business in India. He admitted that Jive did not perform as per the expectation due to relatively lower market size.

It seems that TVS Motors will launch Radeon 125DX motorcycle which was displayed at Auto Expo 2012. The motorcycle looks decent and it comes with disc brake. It is expected that, the motorcycle will have class leading fuel efficiency and very competitive price tag.

It looks just like the Jive with a different body graphics.

TVS Radeon was showcased in AutoExpo 2012.The TVS Radeon uses a single downtube tubular steel frame with a box-section swingarm. The front suspension is the conventional hydraulic telescopic forks, while the rear uses twin shock absorbers with multi-rated, dual-spring technology.The bike will come with the six spoke alloy wheels and will get all black treatment ranging from the engine to forks, swingarm and chain cover.
The Radeon will come with electric start and petal disc brakes at the front wheel.
The bike is expected to launch in September this year and pricing is expected to be around Rs 55,000/-.
Spy shots of the bike undergoing test.
MotorBeam