Speed Limit in Your City?

NH4, Bangalore to Hyd, after crossing Banglore limts, the speed limit is 100KM. People on that rd cross more than 120KM which is a normal seen. I persnally touched 140 in by Bro's Ritz for abt 20 mins or so.
Best part No speech checking device in that high way :)

True but traffic during peak hour is worst! It takes 1 and hours for me to travel a mere 10kms! It's so bad these days that my Verna's in city FE dropped from 12-13kmpl to 8-9kmpl!

BTW great to hear you know Anna Nagar very well , i live there! Near S.B.O.A school to be precise , we should meet up bro!

Chennai-Trichy highway is the same like Chennai-Bangalore highway , just that you will get a lot more straight stretches and traffic is relatively lesser.

Well ECR i got caught when i was new to car driving , had no clue that they will catch me! Nowadays i never cross 40kmph in that particular stretch!

I too stayed opposite to SBOA ages ago. I am not sure if the school was there at that time. That road used to be very beautiful with avenue trees and a very few houses here and there.

Should meet up next time.

Yes that road still has the avenue tress but now its a residential hub!

PM me next time you come to Chennai , let's not go further OT.
V

OT : what is the maximum allowed speed on indian road for private cars ?

vinayan said:
OT : what is the maximum allowed speed on indian road for private cars ?
Click to expand...
Usually it is 60 for cars, it may vary from city to city and zone within the city 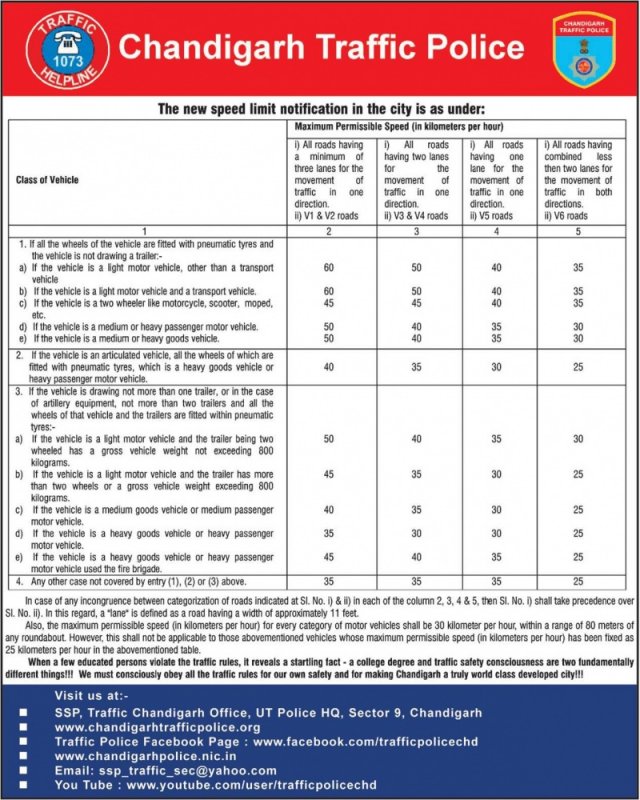 Thanks for the notification 350Z. Yes the over-speeding drive is already on here. Earlier the speed limit was 65kmph on V1 roads as compared to 60kmph now. I was caught three days back doing 60+kmph in my Polo on that road. I had no clue the speed limits had been changed recently and told this to the Police guy. I guess he bought it as I gave him a genuinely confused/shocked look when he had stopped me and told me to pull-over. Luckily for me, the Police man gave just a little 2 minutes gyaan and left me.
S

Finally the speed limits have been revised in Kerala after 15 Years.

I doubt if people used to follow the old speed limits anyway. The only difference it makes is that they're now ‘legal’.

Though revised figures are a welcome move but it’s the implementation of rules and a better infrastructure that needs real attention.

350Z said:
I doubt if people used to follow the old speed limits anyway. The only difference it makes is that they're now ‘legal’.
Though revised figures are a welcome move but it’s the implementation of rules and a better infrastructure that needs real attention.
Click to expand...
Those who go, say a 0.1kmph above the allowed speed limits are being fined on major highways in Kerala, these days. Thanks to those speed guns installed by MVD,Kerala. When it comes to road infrastructure, on the other hand, I have not seen any significant change every time I drive in Kerala last few years.

There is a 4-lane stretch between Trissur and Angamali/Kochi.Even after paying the toll fee, cars will have to negotiate multiple blockages due to traffic signals. The service roads are laid such that you can expect any time, a desperate rikshawala or a two wheeler jumping in, right in front of you from left.
When you get to step a bit on the gas pedal, those speed guns start firing, the moment you cross 79.9 kmph on a 4- lane toll road. In a couple of days you get a chalan with a picture of your vehicle, asking you to pay a fine of Rs.400 or above at the nearest RTO.

Even after paying the road tax, I am ok shelling out the extra [read toll fee] in the name of a 4-lane highway. But imposing those ridiculous speed limits/fines on toll users to tackle the mess caused by poor planning/infrastructure is beyond me.

This revision on the speed limits is a bit of a relief though. Barring the odd 4-lane stretch, 85kmph is about the safest max.speed on all highways in Kerala.
BTW, the offical MVDkerala website hasn't been updated yet, showing the notification dated back in 1996.

The official notification is up on the Kerala Motor Vehicle Department website: 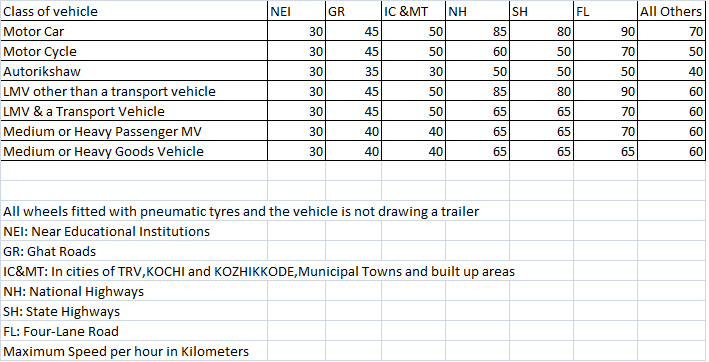 Source and for more details visit : MVDKerala - Home
You must log in or register to reply here.