Here are some pics of my old workhorse - the Scorpio 2.6 GLX, non CRDe. The odo reading now shows 1.85 lakh kms. The engine has become noisy, acceleration has suffered a bit & some amount of vibrations have creeped in (i suspect the engine mounts). But otherwise the car is running fine with absolutely no issues whatsoever. The car has been put to a lot of rough treatment, has travelled over the worst of roads which explains the condition of tyres (the tyres are to be changed next week). Still there is no rattling from anywhere, even my new mHawk had some rattles! The AC blower squeaks sometimes, but thats it. I had thought about adding alloys to the car but considering the rough treatment it goes through, alloys is a bad idea. As you can see from the pics, the wheel caps are fully scratched & the alloys, if installed, will meet the same fate. 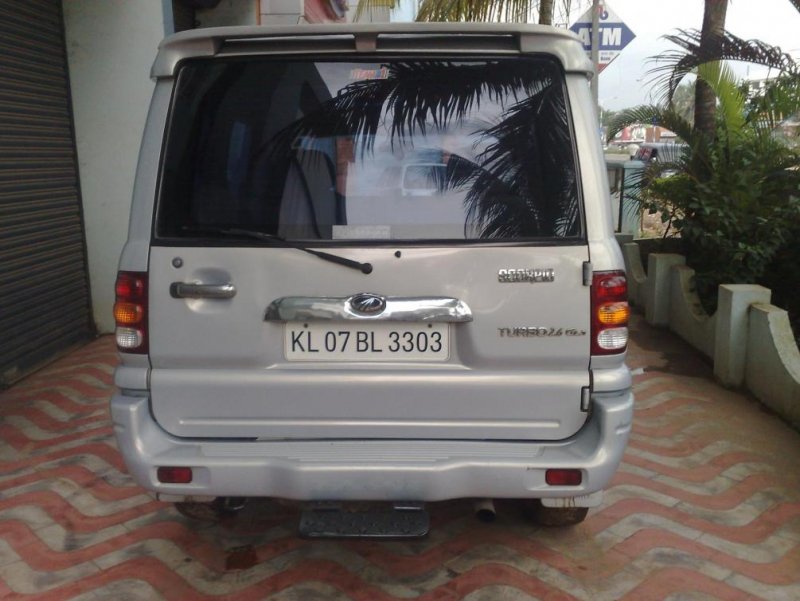 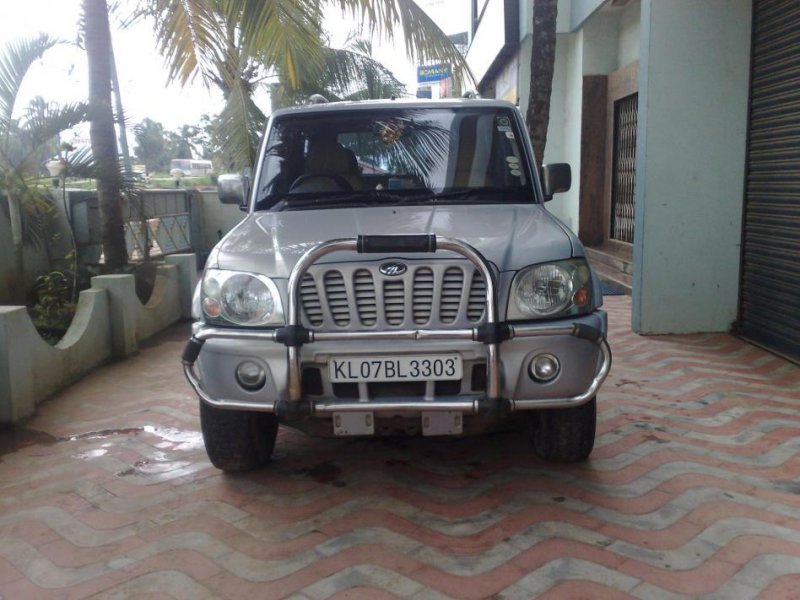 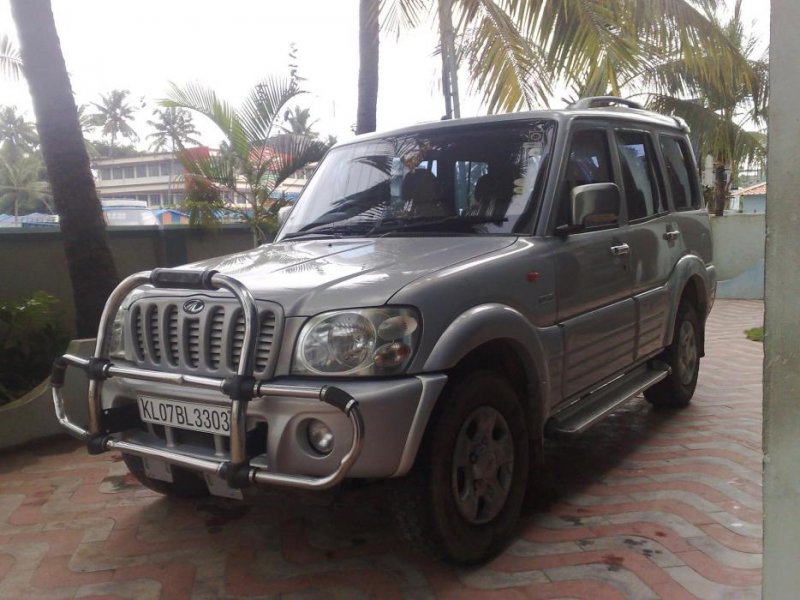 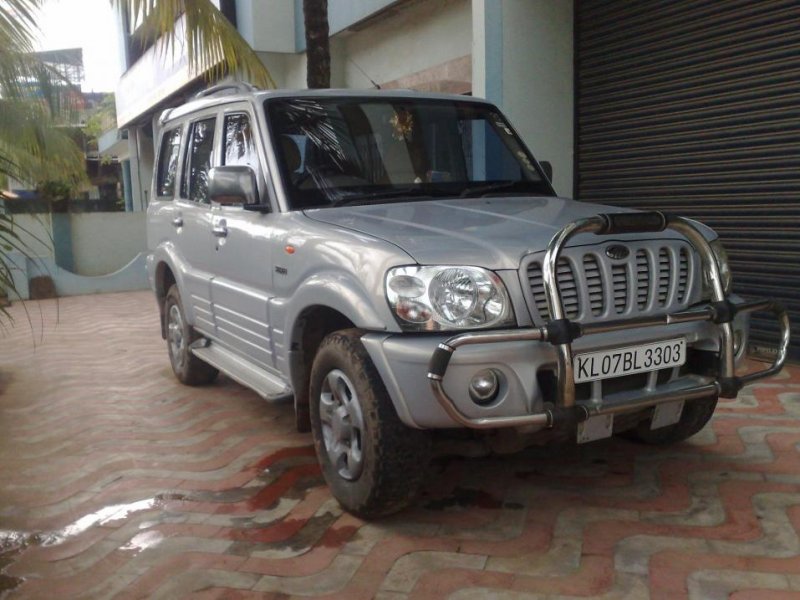 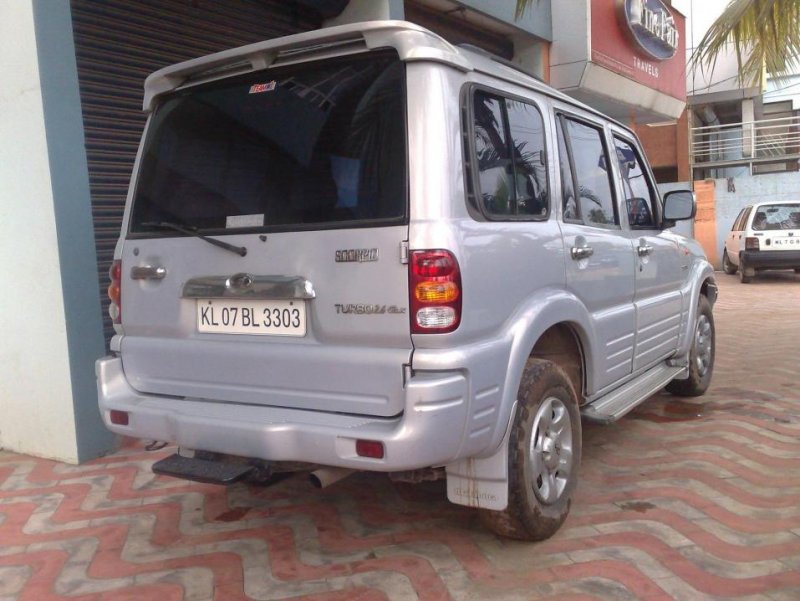 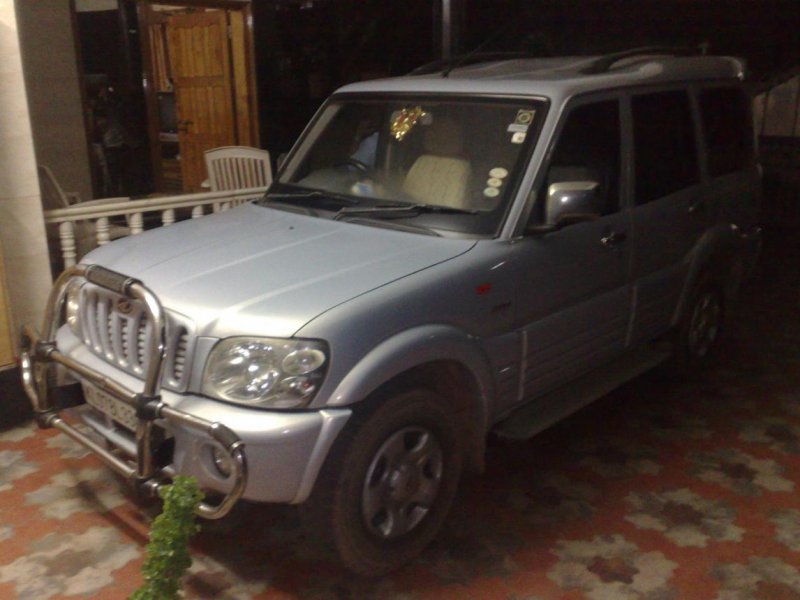 Why? Because it has to consistently travel on roads as shown below! No off roading required but when it rains, these roads turn into slush tracks with huge pointed stones acting as grip! 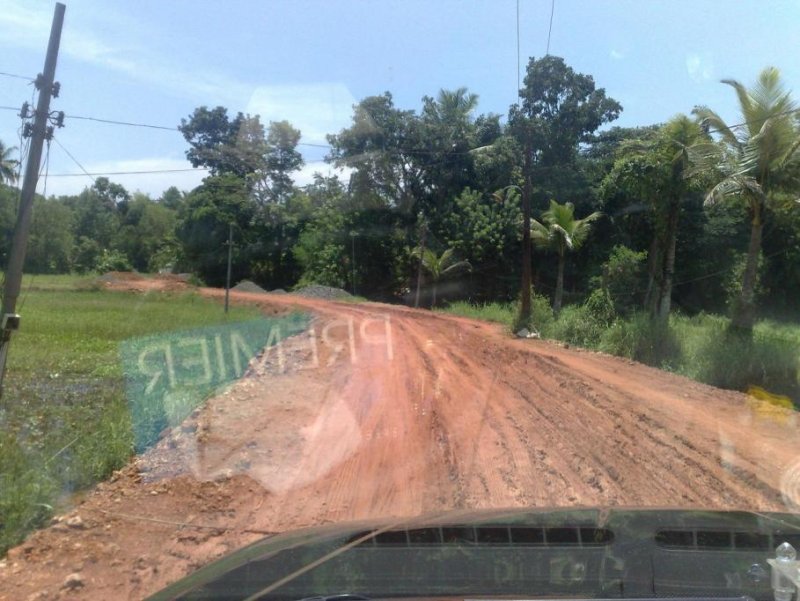 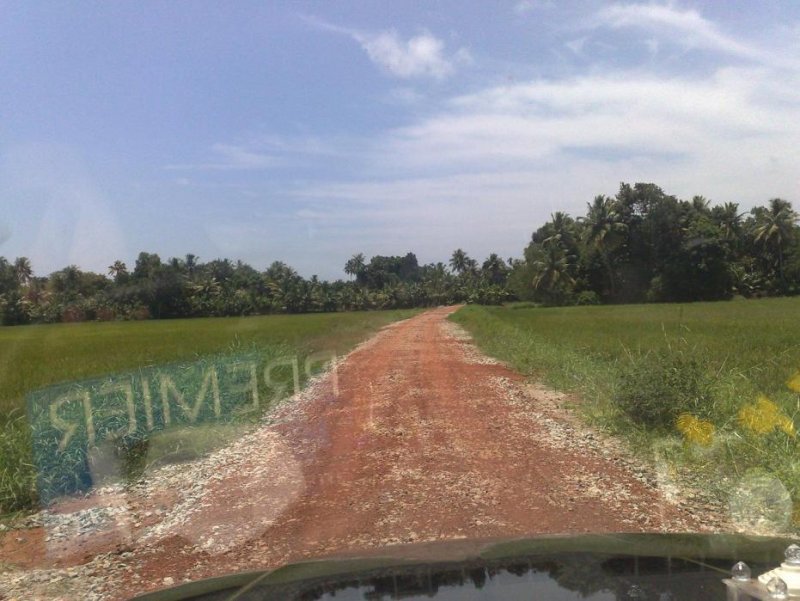 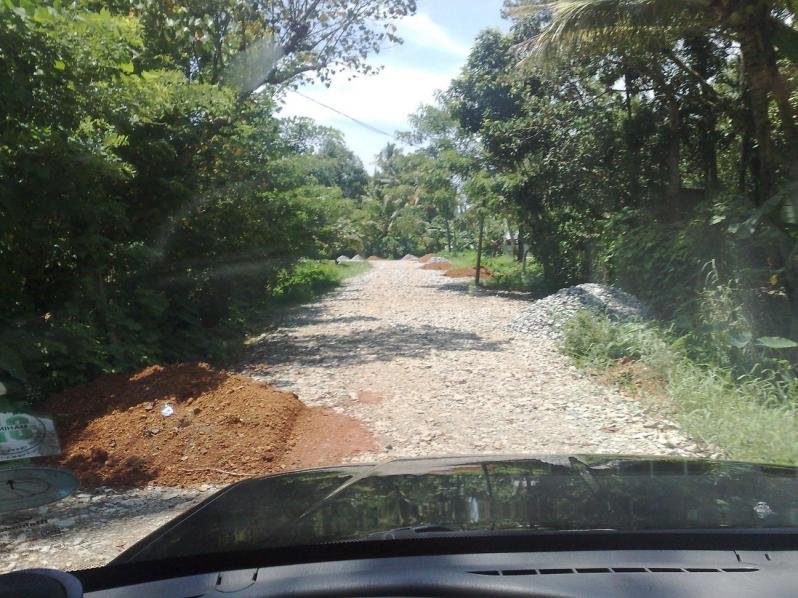 Talking about the M2di, its used as a taxi & does have some rattling but thats more because it has rarely been to the service centre except for normal services. Rattling apart, it has shown no issues till date. 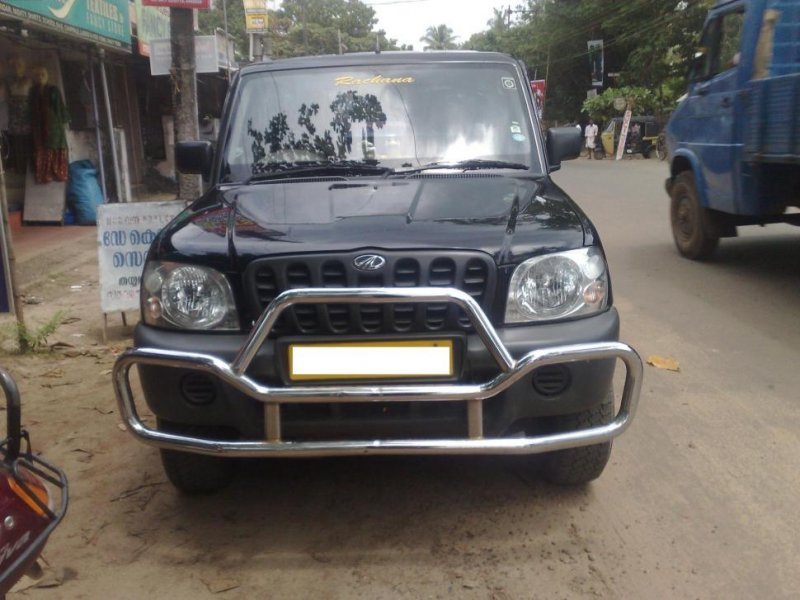 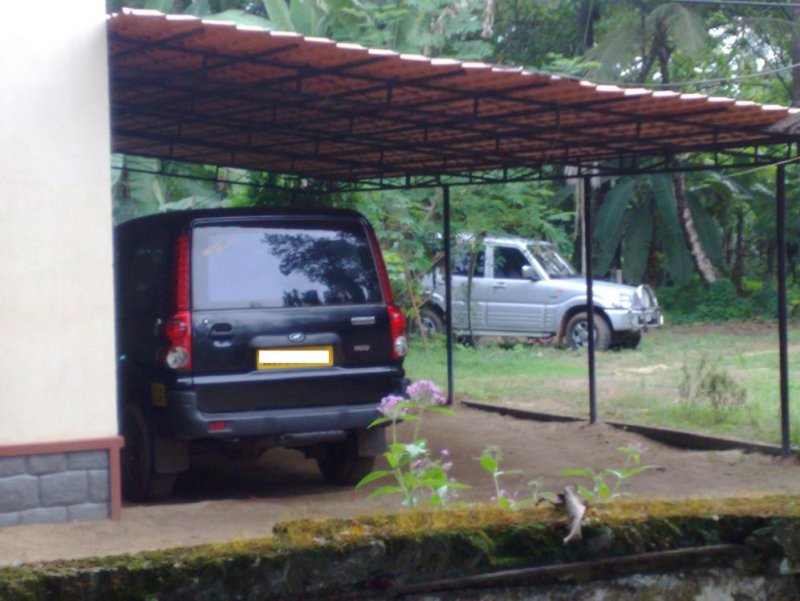 Wow... You have crossed 1.85 lakhs???
BTW, I have one doubt. Is m2di available in petrol version? My friend is fighting with me saying that he had m2di petrol versions manual.

NO, the M2di was never available in petrol. it is basically the bolero's Di engine in the scorpio.

infact the only scorpio available in petrol was the Rev 116 which has renault's petrol engine & was discontinued shortly after due to lack of demand.

BTW, since this is my ownership thread, let me share some more details of the vehicle. this scorpio is the non-CRDe model & was bought in May 2003. At that time, the vehicle was very refined & boasted of 0-100 kmph time of 18 seconds, impressive during those days. for example, the innova still does it in 17 seconds & the tavera still does it in 21 seconds! we have done many outstation trips in this vehicle as it used to be the only & default choice for any family trips, we dint have the innova then. this car has seen places kerela, bangalore, gujurat, tamil nadu etc...

talking about issues, here are a few i remember:
1) a blown fuse means power windows & AC stopped working simultaneously! it was a horrifying experience!
2) somewhere on the outskirts of karanataka, we ran low on fuel & had to forcefully fill in diesel from a very shoddy pump. that day the car started belching smoke as if it was vomiting! that day onwards, the engine started making more noise & lost it's acceleration to quite an extent. even a fuel pump service could not solve it.
3) a broken leaf spring was replaced for Rs. 350! the leaf spring broke because i raced the car over a road under construction!
4) brake pads have been changed 4 times & front suspension bushes have been changed twice.
5) AC blower noise was rectified once & has now re-surfaced.
6) alignment issue has resulted in improper wear in the tyres.

the car was in mumbai till 2008 when we bought the mHawk. since it was not giving any issues, we did not want to sell it & sent it to kerela where it got re-registered. in mumbai, its life was not easy in our hands. i used to drive like a maniac then! scaring cars & autos, swerving at speeds, changing lanes as if i own the road, braking hard (that explains the brake pad changes!)... all were the norm for me! it has seen the worst of mumbai floods- 26th july when i was returning to mumbai from pune. the water level was so high that a bit more speed & water would have flown into the cabin. still it bought me home safely without a complain. it has seen many off roading sessions like hill climbing, mud plugging & 'divider crossing' even though its not a 4WD! you maybe thinking what is divider crossing? whenever i was stuck up in a jam, the scorpio was made to jump over the divider to the other side & race to the first position scaring the oncoming traffic! yes, i was a nerd! it has met numerous shunts too, but never in my hands. my driver first dashed an endeavour from behind, then a biker from behind, then a wagon R from behind & then a biker from front! i am not talking about the countless minor touches which happens in mumbai city. zens, tavera, cyclists, rickshaws have all kissed my scorpio umpteen times! touch wood, it has never needed a body work, painting work or even a minor touch up even after all these! of course, the collision with the endeavour & biker from front meant that the front guard was broken! then it was gifted a new guard.

after it was shifted to kerela, there it is facing more trouble! the driver there rear ended a tempo & broke the guard. again! the guard shown in the pics is new & it already has a dent in the middle. it was as the same driver hit a pole at slow speed! so till now, the car has seen 3 new guards! now you know why this scorpio has such a ugly looking guard! it serves the purpose!

even after all this, i can still call the car utterly reliable as it has never stranded & always start with one crank. the AC chills & when it comes to load pulling ability, it surpasses every test. that this car has gone though rough treatment would be an understatement. it has gone through the worst treatment & i have never seen it complain. this ascertains the fact that i'll never sell it.

i can vouch for this car's build quality as till now i have never heard it rattle or squeak. some roads in kerela arent too good & the driver there does not seem to care about potholes or bumps!

Kudos to mahindra for the scorpio, i love it.

My boss has a scorpio for the last 7 years (Non Crde ofcourse) and he also swears by it.

blackbeauty said:
Wow... You have crossed 1.85 lakhs???
BTW, I have one doubt. Is m2di available in petrol version? My friend is fighting with me saying that he had m2di petrol versions manual.
Click to expand...
Tell your friend that DI always (to my knowledge) stands for Diesel !!

Shynish M said:
Tell your friend that DI always (to my knowledge) stands for Diesel !!
Click to expand...
I have told him that long before. But he doesnt agree.

Hey Raj, a very well written review mate. I can feel your love for your Scorpio, and given the type of driver you are, the Scorpio has fared extremely well as a hardy product. I am doubtful whether any other Japanese or American product can actually match this kind of stregnth and reliability.

My boss has a scorpio for the last 7 years (Non Crde ofcourse) and he also swears by it.

Cheers,
Vroom
Click to expand...
thanks buddy. the non crde was the best product mahindra ever made, it was a true workhorse.

blackbeauty said:
I have told him that long before. But he doesnt agree.

Click to expand...
ask him to go & check in wikipedia.

Dcargod said:
Hey Raj, a very well written review mate. I can feel your love for your Scorpio, and given the type of driver you are, the Scorpio has fared extremely well as a hardy product. I am doubtful whether any other Japanese or American product can actually match this kind of stregnth and reliability.
Click to expand...
now you can see why i am not a big fan of jap cars. as i have always said, they are reliable, practical, blah blah blah... agreed. but no jap cars have made me fall in love with it, argue for it, debate for it & even fight for it!

about driving, i am more careful now & very courteous. i have learned that rough driving is not something you should be proud of! my license says "driving is not your right, its a privilege", i dont wanna lose that privilege! now i am a very sedate driver & believe in "give & take respect" policy on the road. still my mHawk developed a few rattles.

Is it not the same on another site?

yes RSM, its the same.