I think there aren't much takers for Endy at this price range. 50k increase for a minor face lift will just make things worse.

Could not drive the new Endeavour but will get the TD as soon as it is available.

Cons:
1. Last Row of seat still worst but better than Montero's
2. Rear leaf springs
3. Absence of Climate Control shocking and horrible AC knobs
4. 16 inch wheels disappointing. Could be 17 inch atleast if not 18.
5. Huge stepney cover increases the length of vehicle considerably (Will take time getting used to) and also prone to damage.
6. 4wd available only in top end 3.0 Auto model. If you want a 4wd with Manual transmission, have to go for Fortuner.
7. Costly Spares and Service.

Thanks for sharing these wonderful pics + Pros & Cons of vehicle with us.

The new Endy definitely looks better than previous and I liked the small air intake in place of side indicators, Its giving more sporty feeland thanks to those graphics.

However, The front of car isn't that appealing(atleast for me).

Cool job. Keep up the good work and waiting for your TD report.

BTW, Got to know from our member notjustshrawan that car is launching tomorrow.He will also be posting some pics from launch for us.

Endeavour called Everest in Thailand, same model being launched here, also price quoted.
Anyone know the value of 1 Baht? It should be around 10-12 Rupees, so by that ratio, it works out to 15 odd lacs, in Thailand. Lets see what is final price of this vehicle here.
Notable Omission is the 18" alloys & respective tire size, compared to what is offered here. Alpine ICE replaced with Kenwood/Nippon ICE the Roof Mounted LCD was fitted as if it was an afterthought in place of the Centre Roof Lamps Assy, which inceidentally was lying disconnected in centre console storage box(to my query was informed that it came that way from the factory!) . Also glad that engine power is same as sold in thailand model, usually engines get detuned for Indian Fuel Quality/Mileage Conscious Indians etc...
Interiors are the same which sadly the company ignored & frankly should have worked on, especially the rear most 'Torture Seats', rest i agree with TorqueAddict's views. Maybe its a stop gap model till Ford launches a totally new 'Endeavour', to tackle the heat from the Fortuner.
Still reserve my final take on the Vehicle till i get to TD the vehicle & get the final on road price.

Forgot to add that save for indicator lamp bulbs, the remaining part of the Tail lamps located in the 'D' Pillars are still dummies! Atleast they could have put Parking lamp bulbs there & let the brake ones remain in the rear bumper but NO! Ford just won't do so, cost cutting???
Last edited by a moderator: Sep 8, 2009

The headlights and little improved interiors are the only good things i see.

The huge stephine cover,wheels,front grill,rear lights,no climate control(the center of dash looks like some sick TV because of the AC knobs) really look sad.
And why no MT with 4 wd ??

Ford people are spoiling the looks with every upcoming model.

denom said:
Forgot to add that save for indicator lamp bulbs, the remaining part of the Tail lamps located in the 'D' Pillars are still dummies! Atleast they could have put Parking lamp bulbs there & let the brake ones remain in the rear bumper but NO! Ford just won't do so, cost cutting???
Click to expand...
You mean to say that Brake Lamps on top are not real ones??
But from the pic, It looks like that the one located on Bumper are just Reflectors.

Yeah, they have always been dummies, even in the old models of the endeavour, save for indicator lamps position in the centre, parking/brake & reverse lamps are all in the rear bumper. Confirm the same with Neil who owns an endeavour.

Endy looks great atleast for me

The headlights and little improved interiors are the only good things i see.

The huge stephine cover,wheels,front grill,rear lights,no climate control(the center of dash looks like some sick TV because of the AC knobs) really look sad.
And why no MT with 4 wd ??

Ford people are spoiling the looks with every upcoming model.

Click to expand...
i second this, yes looks better then previous gen endy, but overall there's nothing to say as all new endevour, most disappointment is no 4WD for manual tranny

, why is ford killing its own market, may be fortuner isnt available in auto tranny as of now and ford might be thinking to take that tranny with 4wd?

Do you all like the new head lamp design? I think the old macho, no nonsense looks has gone.
S

Ford brings the new Endeavour. As you read it, Ford launches the new Endevour in india. The new endevaour gets a new face with the changes in the headlamps and the front grille. Look at the pictures you can see the diffrence, what a minor change in design can deliver. The new endeavour is less boxy but modern. I wish Ford has given some changes for the rear section too. The ORVM’s gets turn indicators. Don’t worry the new endeveour is not just about minor tweaks but to tame this 2 tonne machine. Last year, Ford shocked everyone with the launch of Endeavour Thunder+ when the 2.5L engine was itself considered a monster. The 3.0L gas guzzler which pumps out 156 bhp and 386Nm of torque now gets an 5-speed autobox. On-the-fly four wheel drive shift adds icing to the cake. Ford has improved the rear differential as well. On the safety front, there are number of welcome additions – endeavour gets 4 airbags. The new Endeavour gets The new Endeavour is priced between Rs15.99 lakhs and Rs17.99lakhs

Waaw. Price is under 18 Lakhs (ex-showroom). But the website is still not updated. Some people argue that central Touch screen unit and DVD player won't be available in India. I think those features will be available. If those are available, the Endeavour is a very good VFM at this price.

Check out the attached launch images. 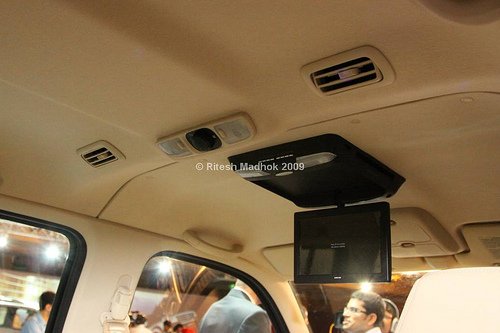 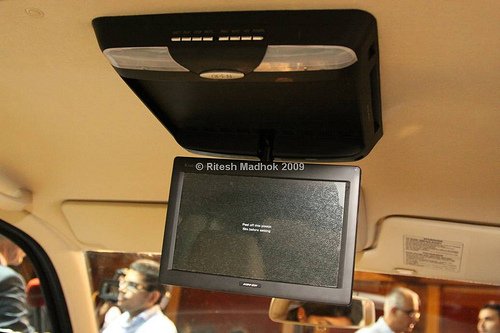 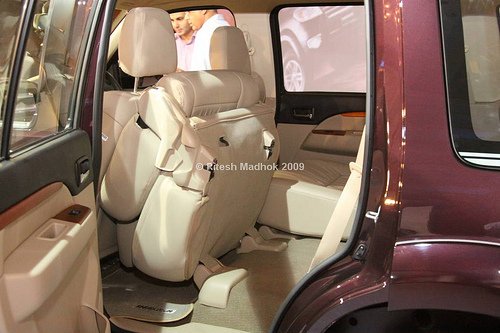 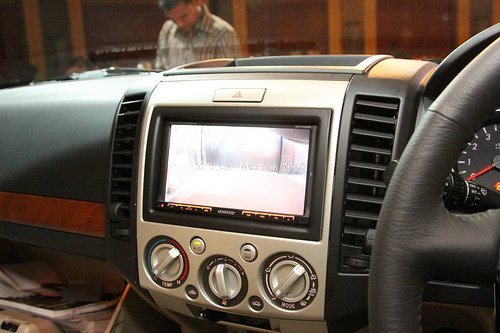 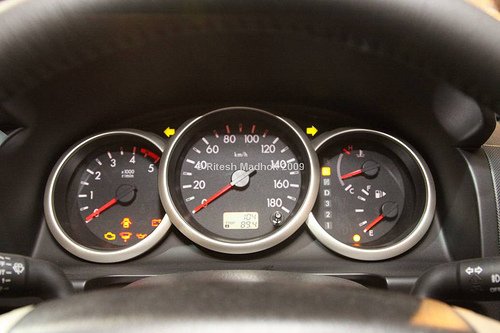 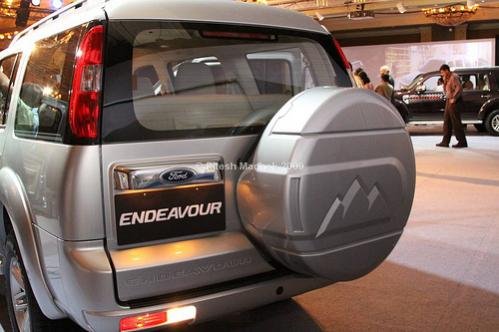 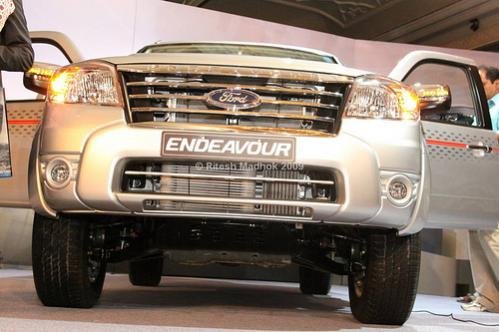 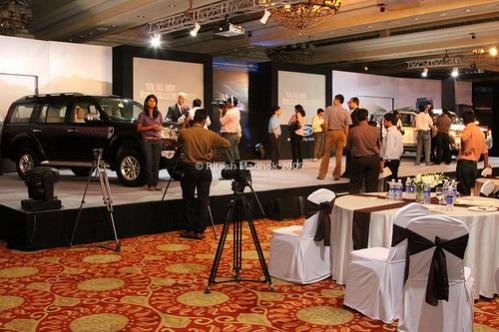 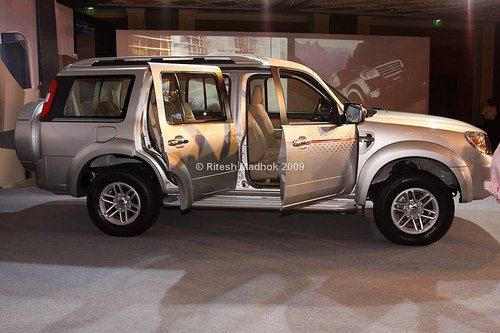 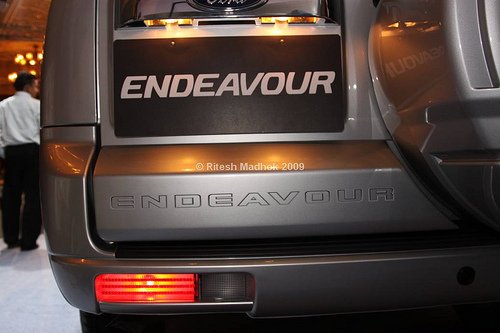 Looking at the above photos & over all package it isn't that bad.

But they could have made it a lot more better.
You must log in or register to reply here.