Quiet disheartened to write about the dealership experience while booking the car. Thought I’d share this. We booked a Figo 1.2 ZXI on 28th December by handing over a cheque of Rs. 20,000 /- to Mr. Sagar (which was given on 21st December for immediate booking). I followed up with him daily, but he gave excuses of collecting it the other day, since his manager was on leave and the receipt was in his drawer. Days went by, but the manager never came. One day Mr. Sagar finally called up, and said that he wouldn’t like to stretch it long and hide, as he has misplaced the cheque, hence he was giving excuses. We had no issues with that and immediately issued a new cheque of Rs. 20,000 the very next day. We asked for a delivery on 14th January, 2011 – which was promised to us. Now we had to make the remaining payment, which we did on 8th January, 2011. But after few days Mr. Sagar called us and told that we are short of Rs. 26,000 /-. To our surprise, we went to the showroom to cross-check, and found that Rs. 20,000 /- remaining and not Rs. 26,000 /-. It was when we shared the same with Area Sales Manager, Mr. Sameer and complained about Mr. Sagar that he lost our cheque and was over quoting the balance. That’s when things started coming up about this sales man. He had charged us Rs. 5,000/- in cash for Teflon Coating, PU and Anti-rust, without paying a receipt. That’s when we got to know he did the same with a lot of other customers and for larger amounts. A police complaint was launched against him yesterday, as he is absconding and we are yet to receive this money! We are supposed to get our car delivered tomorrow, but when I went to the showroom for a PDI, I was appalled by what I saw! The ODO read 448 kilometres already! With so much mileage showing on the ODO, I declined to take the delivery tomorrow, as I need a fresh piece. Come on, what would have you done if it was you in my place?  We were told that our colour Moondust Silver was in the stock, at Panvel, but now the SP says that it has been driven from Aurangabad! Now that’s interesting. I’m sure the car would have touched the speeds more than 40kms as I am well acquainted with the delivery drivers, who love to fly the car above 80. Not to forget the “pan” stains near the window, which he must have gleefully chewed and spat out. I don’t want a car that’s been driven more than 100kms on the date of delivery. VIN no.: AG78291

Welcome to The Automotive India.

I feel sorry for you. And let me tell you that what you did was completely right. Since you are in Mumbai i find it funny that the car was driven all the way from Aurangabad. Maintain your stand and do not take the delivery of a car with more than 50k on odo. If you face anymore troubles, you can cncel your booking and go ahead with the deal with some other Ford dealer.


as he has misplaced the cheque, hence he was giving excuses.
Click to expand...
After reading your post i find even this statement of the so called SM fishy.

You absolutely were spot on in denying that car. It's your money and it's your right to get a fresh piece. Moreover you can ask for the form 22, which states the time of manufacturing of the car.
A

when i bought my honda city, it was only 20 kms. even then i demanded an explanation from them, to which they said the car is tested in the factory and also from bringing to their showroom from their stock yard

Apoorvs , Welcome to the forum .

Good that you are so cautious , lot of customer do take delivery of the car as the exitment in them makes them

Call the numbers of ford and complain.
Many dealers play with customer money , some even dont give proper receipt for the advance which some pay in cash - they use it for their fast help and delay in our car.

Now a days cars are delivered freshly to the customer , so is the reason they use the truck service. almost 450 kms in a new car is very very bad,

Either it may be used as test car , else it may have a problem , that was rectified and trial runs were done on it.

Some remove the meter cable and drive them . that is hard to find.

Dont accept this car , get newer one .
A 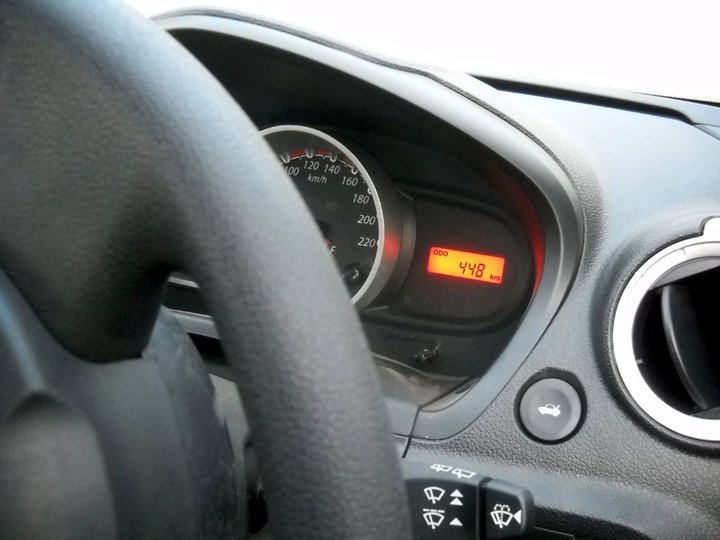 Apporva, i would strongly suggest you to speak to the higher official at the dealership and tell him that you wont take the delivery of that car which has already clocked about 500kms. Ask them to stop the regn. process and in the mean time get in touch with the Ford india officials(regional manager). Your dealer must be having his contact number.

Click to expand...
Did you tell them to register, if no its their fault.
It suspicious where they have run 448KM. In my view they must have used it for test drive etc.
Don't take it. Take only if they give you some hefty discount. Also do a thorough PDI to see there is no issue. Take it in written also, that in case you find any issue, they have to fix it for free.
J

Do not buy it. Do no accept it.

It could be test drive mule or an accident repaired (possibly may not be the whole car but the mid assy or related stuffs !!!

Certain standard and rules does not allow manufacturer or dealer to drive the car to showroom from plant.
Last edited by a moderator: Jan 17, 2011

Click to expand...
Did they even bother telling you the reason why its clocked 400+ Kms? Take it up with the higher-up's and hopefully they will compensate for this misery.

How did they register it, if you had denied it? I guess you can refuse to accept the car, if they had registered without your consent.
A

Hey guys, I just came back from the dealership, spoke to the manager there, he said, 'We could have changed the ODO's figures, but we're giving the delivery as it is. I called up Ford Customer Care, and after that immediately got a call from the Regional Head. They did accept that it wasn't communicated to us that the car will be driven from YZ Showroom in Aurangabad. It was the mistake of Sagar, the salesman who's terminated.

The manager of Bhavana Ford has told me what can he do to make me happy, since the car is already registered and RTO passed. Till the time I went to see the car, it was already registered, because I paid for it in the overall amount, getting my consent automatically.

I believe he is ready for compensation, well some kind of? If yes, then what should I ask for in compensation? If not, then I should take this to consumer forum (i think it will then harass us further). Definitely it's been a harrowing experience.

@jayadev What standards and rules are you talking about? Help me with some proof online?

@avindu They told me that since the car is 2010 model, it was brought from Aurangabad, which couldn't be brought on the trailer.

I would suggest, cancel the order, book it from another dealer. Its not your headache if the dealer had hired some crook, who worked as a salesman and dint bother telling you. In simple words - blame the dealer.

While the ford deliver's car with odo reading under 50km to its customer
enjoy the fishy car and expect some fault say some thousand of kms.
Its your choice , we here in forum can only guide , after all its your car and you are going to face any consequence.
Cheers

ApoorvS said:
Till the time I went to see the car, it was already registered, because I paid for it in the overall amount, getting my consent automatically.
Click to expand...
Don't listen to these things. Dealers plays game with buyers.
Till you verify they shouldn't have done registration.

ApoorvS said:
@avindu They told me that since the car is 2010 model, it was brought from Aurangabad, which couldn't be brought on the trailer.
Click to expand...
Again, this is void statement, don't take these.

The best thing, as per me, is go and see the car properly. Do satisfy yourself that car is fine. If you feel its ok to take, then bargain hard. Get freebies and do take in writing in case you find any issue afterwards they need to fix it for free.
You must log in or register to reply here.