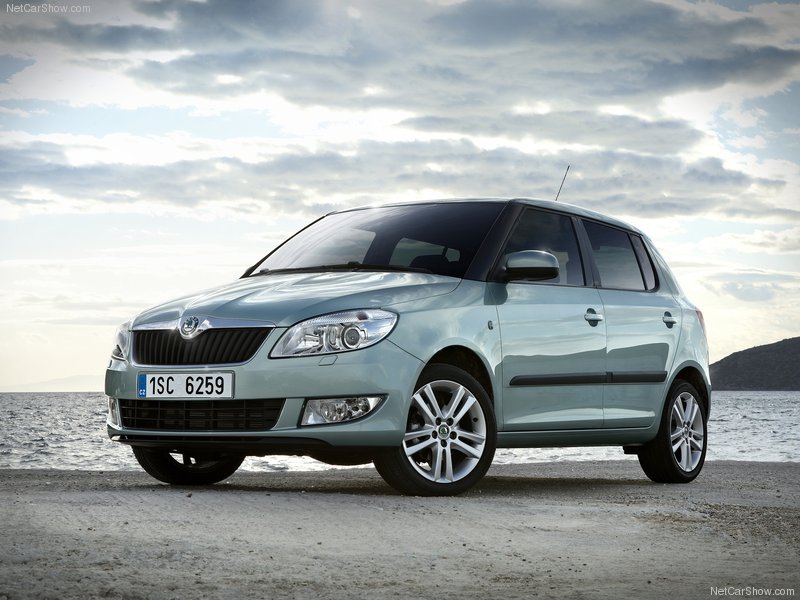 Skoda Automotive is a fully owned subsidiary of Volkswagen Group, which is one of the largest car manufacturers in the world. Introduced as a super hatch, the Fabia was the first premium hatchback launched in India but could not succeed due to unreasonable pricing; however, Skoda re-launched the Fabia with mild facelift and a new fleet of engines at a much affordable price tag. We test driven it to find out whether it could prove itself in the segment and set its own benchmark?

At the time of its launch, Skoda Fabia looked futuristic mainly because of its exterior design. The floating roof design and characteristic grill always made the Fabia stand apart in the crowd. From the rear, there is no visual differentiator between the old and the new model, therefore, it still looks similar to the previous generation, the only difference being the bumpers and some little other bits.

The first look of the Fabia’s front gives an impression of grown up design. Foglamps are inspired by bigger sibling, the Laura that sit in a bigger slot unlike the circular one before look elegant and give a stance to the overall front. The horizontal signature grill remains the same. Headlamps have been chiselled to look curvier than before. Apart from these minor changes, the exterior remains more or less the same. The rear has almost no changes to differentiate the new model from the older one. It retains the translucent tail lamps, which houses rear fog lights, brake lights, turn indicators and reverse lamps. The top end Elegance trim gets the same old 5-spoke alloys, which I feel, needed a swap with a new design. However, the classic and Ambiente versions get the new design Comoros full wheel covers. 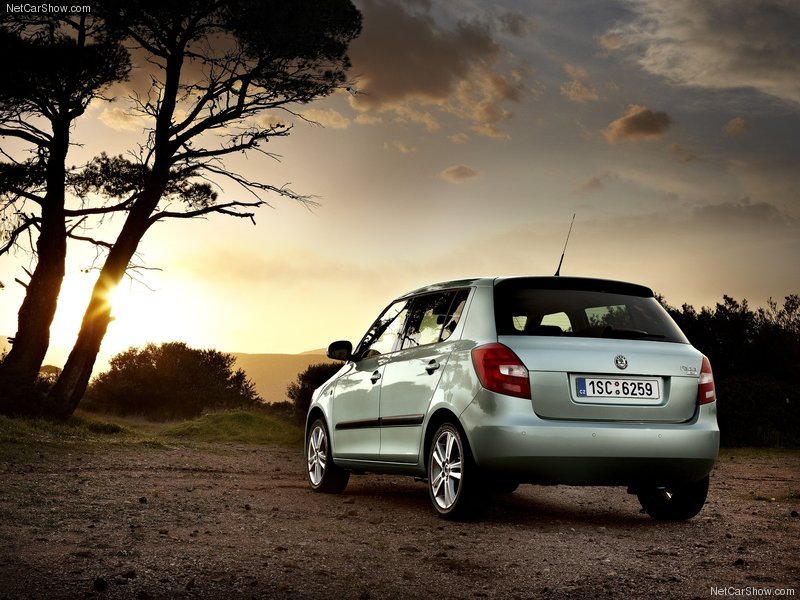 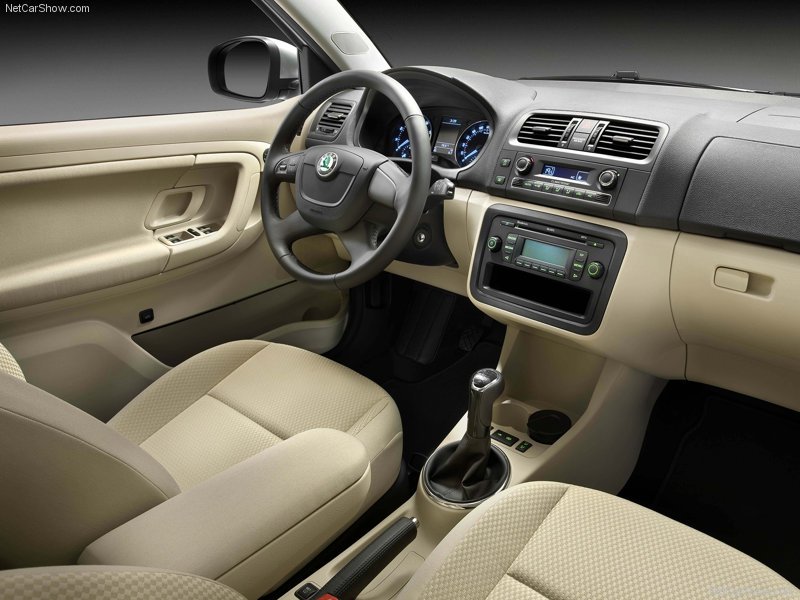 New Fabia is just a facelift and not a new generation that is why it seems that Skoda thought why to put in extra efforts for visual appeal. After entering in the cabin, we tried hard to spot a bit that was new, but regrettably could spot none. The dash carries the analogous Cream and black combo which still feels good and a class above. The nature of plastics used is great with no bits looking like falling apart. The 4spoke steering wheel is alike to the one seen on its older siblings minus the chrome strip around the horn pad. The storage space is abundant in the new Fabia. There are two storage compartments, one on the dash (Absent in classic), and other on the lower side of dash. The latter one gets illumination for the convenience at night. In addition to this, there is a storage bin under the steering wheel. The build quality is just outstanding. The heavy THUD sound from the doors will easily make you feel so.

Moreover, the 315 liter of boot is adequate for holding your shopping bags but if you are going on some highway cruise with two people on board, you can roll down the rear seats escalating the boot space to 1180liters. There’s no climate control even as an optional feature in the Fabia. It now comes with manually regulated air-conditioning which chills the cabin in not time, however the Auto AC will be missed by many. The instrument cluster too remains the same, however the chrome lined dials look stunning and this tad does not look dated at all. In midst of the dials sits the Multi information display to give a wide variety of information like Fuel to empty, Instantaneous Fuel efficiency etc. However, the MFD is present only on the Elegance. Now here is a list of features that have been excluded from the Fabia and will be hugely missed: Rear-glass, wiper defogger, electrically adjustable mirrors, 60:40 rear seat split. 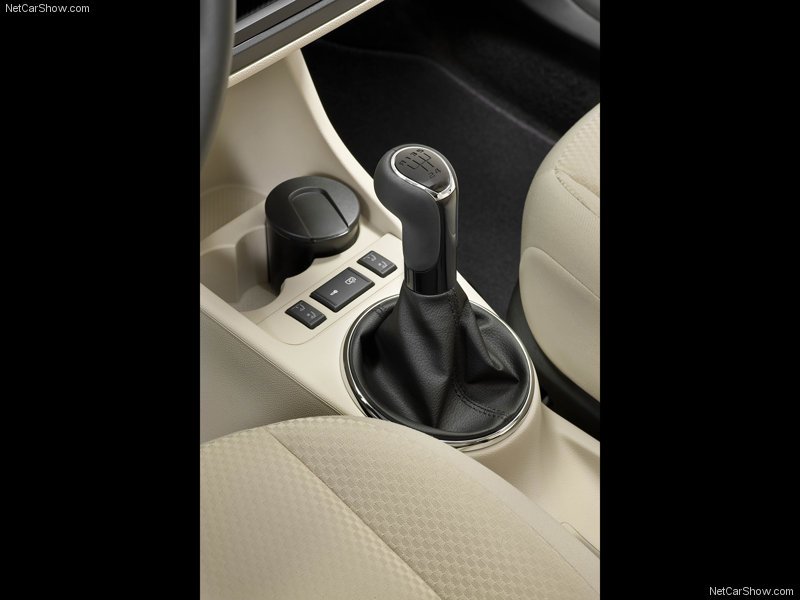 1.2L MPI (Petrol)
As we, all know Skoda Auto is originially owned by the Volkswagen group; this is the reason why the Skoda Fabia too gets the same engine that powers the Polo. Even the technical specifications remain absolutely the same. The 1198cc petrol mill pumps out maximum power of 75BHP at 5400rpm and a torque of 110Nm at 5750rpm. This 3 pot engine is quite smooth and hassle free to drive in the bumper-to-bumper traffic. Crank the engine and you will feel a disturbing clamour intruding the cabin, but as soon as the engine turns on, you will hardly hear a sound. We shifted to the first gear and we were off on a highway to find the actual drive characteristics of the car. The low-end torque is amazing and just like an ideal petrol hatch back it just ran smoothly without any hiccups of lag. The gear ratios are commendable and make your drive hassle free without forcing you to shift frequently once you have attained a cruising speed. While during the overtaking, you may need to downshift to get sudden surge of power.

1.2L TDI (Diesel)
This new 1199cc diesel heart has the power output of 75BHP @ 4200rpm & 180NM of torque @ 2000rpm. Honestly, I was disappointed with this small engine. The engine sounds are minimum. The engine is quite refined but not as refined as the Punto. The drive suffers from a serious turbo lag. Uptill 2000rpm one will have to control nerves with patience and wait for the rpm needle to cross the 2000rpm mark after which the turbo kicks in with an impact. This could lead to a fatigue in city traffic where one needs to have instant power at disposal. However, the issue of lag can be handled well, if driven at higher rpms. Nevertheless, on hilly terrain you will have to maintain proper RPMs to avoid frequent downshift or flooring the gas pedal that will not help much. However, on highways you will find the drive exciting.

PS: This was a long pending review, but couldn’t be aired online timely due to unavailability of images.

Yet another good report Akash! I feel the Fabia is now a VFM hatch after its price cut. The only thing that worries is its reputation for poor A.S.S! I too liked the Interior fit and finish quality and the solid build quality!

cooldhaya said:
Yet another good report Akash! I feel the Fabia is now a VFM hatch after its price cut. The only thing that worries is its reputation for poor A.S.S! I too liked the Interior fit and finish quality and the solid build quality!

Click to expand...
Thanks Dhaya.
IMO Skoda should really work hard as far as the after sales services are concerned.

Guys, following are the sales figure for Dec'10 taken from Fabia dedicated site. What do you have to say...1853 is quite a good figure but 62 Puntos ? I actually cannot belive it.

Anyone knows about it, please confirm.

@ Akash, great review...but it would have added more value if you could have arranged pictures from any Indian varient. What do you say !
Last edited: Jan 13, 2011

1853 is a good figure for Fabia , after the price cut its gradually picking up!

the car in pictures is a left hand drive.Is the same car available in India?

Moreover what my TATA dealer told me was that the factory unit was closed in December,so if the number provided above are wholesale unit numbers then it is ok for Punto .

Of course no , these pictures are taken from the net i guess.

cooldhaya said:
Of course no , these pictures are taken from the net i guess.
Click to expand...
You are correct dhaya. I am sure there will be some feature changes in Indian and International varients. But Akash wanted to give us an inside so it was ok. But will Indian pictures, if would have added more value.

shailinder said:
Anyone knows about it, please confirm.

As for Punto, its strength & weakness both are FIAT.

As for Punto, its strength & weakness both are FIAT.
Click to expand...
Now there is a disconnect. See I have seen ONLY ONE new Fabia since Oct in Delhi. My office is roughly 45kms from my residence so I cover 90+ kms, 5 days a week (at least). So possibility seeing more should be high but not. I have a feeling that old Fabia is stil selling like hot cake due to lack of features in new and heavy discounts on old Fabia. I am saying this by my gut feeling completely but " jo ankho se na dikhe us par kaise wishwas karo".

Just to inform you that there was absolutely no discount on new Fabia in Dec'10. Only discount available is "CORPORATE".

the worst looking premium hatch i have ever seen is skoda fabia. other skoda cars are much fabulous especially skoda superb.
if anybody wants a german car go for vw polo . i believe , both fabia and polo have same roots;das auto!
You must log in or register to reply here.