Premium motorbike-maker Royal Enfield, a unit of Eicher Motors, said on Thursday that due to an unanticipated high demand for its products, it is planning to double annual capacity to 1.1 lakh units in the next 2-3 years.

The company will invest about Rs 30-40 crore every year for the expansion of its Chennai plant, which has at present an annual production capacity of 55,000 units a year.

Dr Venki Padmanabhan, COO, Royal Enfield, told Business Line that the expansion plan has been made keeping in view of the rapidly growing demand for its niche products, which is leading to a waiting period for many of its models.

“We thought that new Enfield models would have a very small demand, with the Classic we expected to do 200 units a month, surprisingly the demand is close to a 1,000. We're building both capacity and R&D capability. In the next 2-3 years we'll be doubling capacity,” he said.

He added that the Classic 350 and 500 models have waiting periods of up to 9 months, while to own a Thunderbird 350, one would have to wait about three months.

On new products, Dr Padmanabhan said that a 500cc higher power Thunderbird is under development, though the launch is still two years away.

The company is also developing other bike styles, like the high-end ‘Café Racer', besides a larger 750cc engine. It has also started exports to new markets like the US.

has launched two new versions of its Bullet Classic 500 to hark back to days long past – and it's also offering kits to convert existing Classic 500s into the same spec for minimal cost.

First up is the Bullet Sports. Inspired (apparently) by the Crusader Sports of 1959, it gets drop bars and a Gold Star style silencer, plus a fly screen and bar-end-mounted mirrors. New, the bike costs £5,595 - £400 more than the base model – or you can buy all the bits for just £353.95.

Better still is the T5. No, not an early Terminator model, it's Enfield's take on the currently popular matte-green faux-military look. Yep, Ducati, Triumph and Moto Guzzi have all done it already, but the Enfield actually looks like it's dropped straight out of a WW2 movie thanks to real 1940s technology. Compared to the stock Classic Battle Green, it gets Continental Twinduro rubber, braced handlebars and an alloy bash plate. All in, it's only £5,395, or get the bits alone for £251. 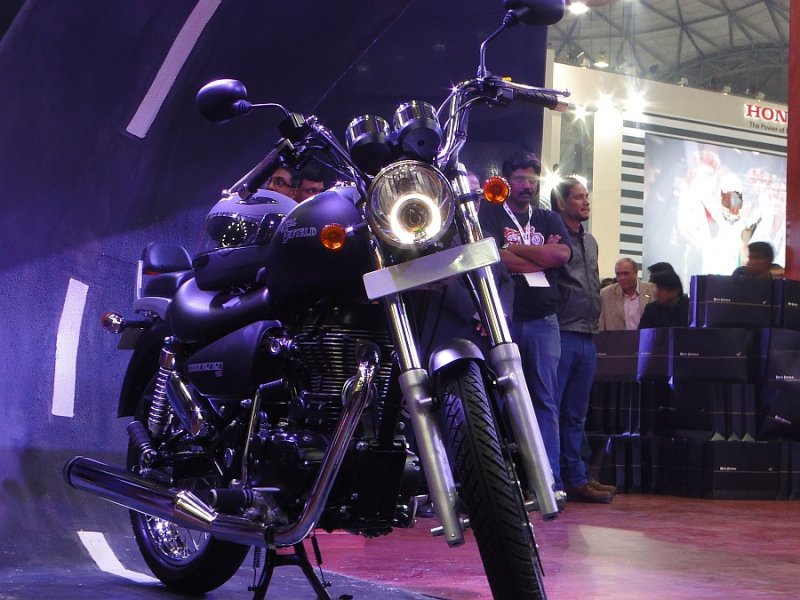 But nothing is as good as the 500 TB. Simply stunning.

I have had a good look at the 500cc Tbird running on the road while I was on my bike, the bike has no road presence at all, it gets lost in the din of the traffic and doesn't differentiate with the 100, 150 CC variants in terms of exhaust note. And compared to the existing 350CC Tbird this one is smaller in length and like I said doesn't have much road presence.

But it looks so beautiful. But can tuning the exhaust can improve it?

Tuning the exhaust? didn't get what you mean unless you mean removing the filters and getting glasswool done in it for the firing. I would say even with that you won't get the feel of the thump like the original cast irons give & glasswool does have an effect on the engine
A

EnfieldRyder said:
I have had a good look at the 500cc Tbird running on the road while I was on my bike, the bike has no road presence at all, it gets lost in the din of the traffic and doesn't differentiate with the 100, 150 CC variants in terms of exhaust note. And compared to the existing 350CC Tbird this one is smaller in length and like I said doesn't have much road presence.
Click to expand...
I dont know what these guys are upto ,turning the real bike into bicycles ?

Deadly hate those headlamps pregnant with angel eyes..come on it is so wierd ,ugly and odd.

I have not much interest left to say about wheels especially rear ones..S*Cks

Is there a problem with the deliveries at RE?

Called RE Brand Store, Bangalore in the last week of Dec '12 and they said that expected delivery is 2nd week of Jan '13. Call them up today and now they say 'due to production issue, delivery is expected in Feb '13'.

RE are very much concentrating on the Production... But they need to realise there is a big hole in the servicing part.
The dealers (not all dealers) are not having much experienced mechanics who can work with the perfection. My friends are having issues with the dealer servicing.

The response from the dealers, atleast in Bangalore has been pathetic to say the least. Customers are treated as dirt.

Dealers are spoiling the reputation of Royal Enfied.

Something interesting I found today about Thunderbird 500, I was checking out Yahoo Bikes in 2013 for the bikes to be launched in 2013 & in the list is the Triumph Bonneville Classic which is the low end model of Triumph

Believe me or not there are similarities between the Bonneville & Thunderbird 500 with respect to Mud guards/Fenders (front and back) and the Instrument cluster, head lamp assy, the tank, the embossing of RE in full form on the middle mount of the handle. Now I do not know if RE has any knowledge sharing with Triumph with regards to design. This is NOT an accusation but a mere mentioning of similarities of between the 2 bikes! and this is err.. not surprising for me.

I back this with the two videos from YT Triumph Walkaround RE Thunderbird 500 Walkaround
Last edited: Jan 6, 2013

Royal Enfield, the Chennai-based motorcycle manufacturer, has appointed a new distributor, MotoGB for its bikes in the UK. MotoGB will take over from Royal Enfield’s long-standing distributor Watsonian Squire with immediate effect.

Royal Enfield has registered growth of over 50 percent in recent years in international markets and the UK being this motorcycle manufacturer’s place of origin, it is an important market for the company.

That's a good news, but i wonder how RE will handle the new market with respect to their production constraints and their new factory is at the least an year away
You must log in or register to reply here.