With the demand for luxury sports utility vehicles (SUVs) growing at a steady pace, Mercedes-Benz is planning to start the assembly of its first SUV in India — the M-Class. This is slated to begin at its Chakan plant, near Pune, by around the year-end.

Such a move will help the German luxury carmaker gain increased volumes through more competitive pricing and stave off the rising threat of BMW, to which it lost its premier position by a slim margin over the last two years. BMW already assembles the X1 compact SUV at its Chennai plant and is planning to add the X3 this year, while Audi produces the Q5 at Aurangabad from knocked-down kits.

“Assembling the M-Class is the next step in adding more models to assembly in India. The demand for the M-Class is steadily growing and after the sedans, this model sees the highest demand. We are looking to start local assembly by next year, including the engine,” a senior company official told Business Line.

Mercedes is all set to add a new variant to its M-Class lineup, the ML250 CDI. This variant will slot below the more-expensive ML350 CDI which is priced at Rs 56.9 lakh (ex-showroom,Delhi).

The ML250 CDI will be the first M-Class to be assembled in India via semi-knocked-down kits. Local assembly and smaller engine means Mercedes will be able to aim the ML250 CDI squarely with the likes of the Audi Q5 and BMW X3 which are actually a segment lower. (For example, the BMW X5 is a direct M-Class competitor).

The Mercedes ML 250CDI will come with a 204bhp 2.2 litre, four cylinder diesel engine assembled by Force Motors for Mercedes India. It’s the same motor that powers the E250 CDI and the C250 CDI.

The ML250 CDI is expected to sport most of the ML350 CDI’s features such as Intelligent Light System and Active Park Assist, among others.

Mercedes will officially launch the ML250 CDI on Oct 10.

^^ Any details on pricing ?

Mercedes Benz has commenced the local production of M-Class in India. It is for the first time M-Class will be manufactured outside the U.S.A.

Mercedes has also launched a more affordable model of M-Class – 250CDi, which is available for Rs.45.64 Lakhs (Ex. Showroom, Pune).

Peter Honegg, Managing Director & CEO, Mercedes-Benz India commented, “The luxury SUV is the fastest growing segment in the Indian automotive industry and the new M-Class is the leader in its category. The benefits of local production have been realized in the form of aggressive pricing, easier production availability and flexible production scheduling- each of these will benefit the discerning customers and ensure greater appeal of the M-Class in the high growth luxury SUV segment. The M-Class 250 CDI priced at Rs. 45.64 lakhs (ex-showroom Pune) is the first M-Class ever to be offered from a local production outside Mercedes-Benz’s SUV plant in Tuscaloosa, USA. India becomes the ‘first’ market in the world to enjoy this elite status and further highlights Daimler AG’s focus and commitment on the Indian market.”
Click to expand... 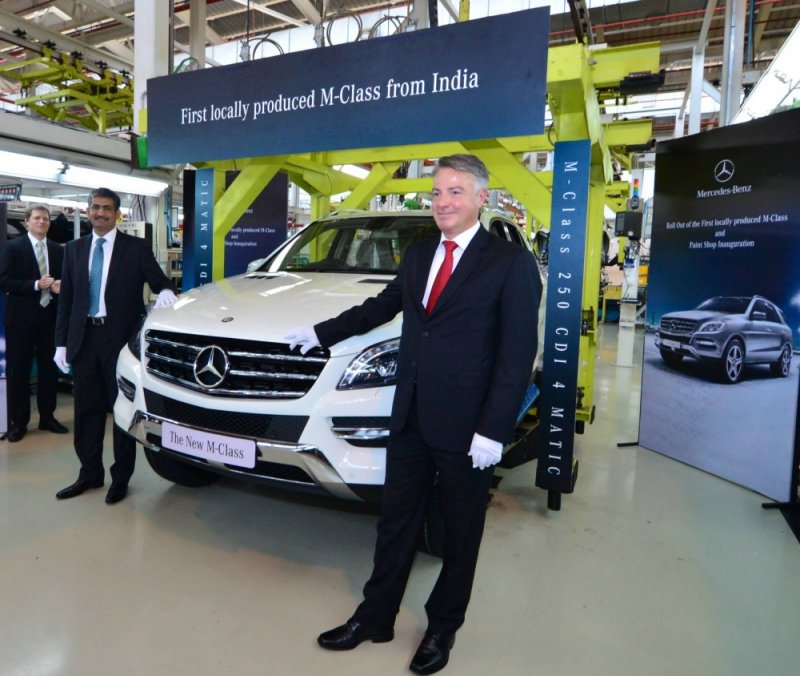 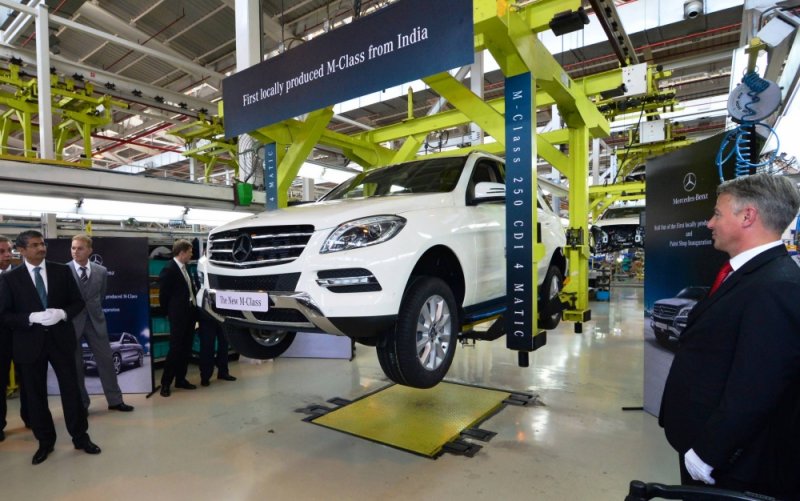 I have inserted an excerpt from the official press release in the above post. Apart from the local production and launch of M-Class 250CDI version, Mercedes Benz has also inaugurated a state of the art paint shop at Chakan Plant.

Mercedes-Benz India also announced the start of operations of its state of art technologically advanced paint-shop located within its Chakan facility. The Paint Shop is capable of water based painting using highly sophisticated and environment friendly water based painting technology. The paint shop of Mercedes-Benz India is fully automated and maintains identical painting standards in line with stringent global standards of Daimler. The key highlights of Mercedes-Benz’s technologically superior paint shop include the flow of cars with latest communication systems for conveyors and tracking of each and every car at every stage with RFID systems. The control of all the equipments are through a central server and automated feedback loops for equipment ensures optimum settings according to the process and environmental conditions.
The paint shop also boasts of sophisticated checking laboratories with the latest equipment. The automated selections of colors are enabled for robots and an online status of input and output offers flexibility and complete control in production sequencing.

Mr. Piyush Arora, Director, Technical, Mercedes-Benz India commented, “The new Paint Shop at Mercedes-Benz India Chakan facility now positions us as a global benchmark within Mercedes-Benz world. This underscores our bullish outlook for Indian market and we look forward to introducing more locally produced vehicles for the discerning Indian customers. The paint shop and the additional assembly lines will be the cornerstone in Mercedes-Benz’s product offensive for the foreseeable future.”

The paint shop has an annual capacity of 20,000 units which is extendable to 40,000 units annually. The level of refinement, implementation of advanced technology and flexible processes positions this amongst the most sophisticated in India. With an approximate total area of 17000 square meters, the new paint shop of Mercedes-Benz India was created within a record time of 16 months.
Click to expand...
Drive Safe,
350Z

wow! 46 lakhs looks very tempting for m class. well i wish merc also starts localising b class. i can think of owning MY OWN brand new merc after some years then!

Umang said:
wow! 46 lakhs looks very tempting for m class. well i wish merc also starts localising b class. i can think of owning MY OWN brand new merc after some years then!
Click to expand...
When I had been to Merc showroom recently, the inputs I got was that Merc will first see how market reacts to B & then think of localisation. Rather than localisation, Merc is busy with launching its range in India. They said that by 2014 or so, the entire range of Mercs will be available here.
And by M250 CDI, I am sure sales of Audi Q5 and BMW X5 will be hit.
You must log in or register to reply here.