Good visibility all around.

High sitting for easy ingress and egress for all ages.

No scientific reason to support above statement though, just my person observation.

Steering at high speed above 100 is very light and one would also see a little play beyond 100KMPH. Dangerous on high speeds or highway drives.

Cramped back seats and lack of under thigh support. (It is just for a small family city car and nothing much)

Hmmm, from where should I start it?

Around Aug’07, we were expecting our second child and due to some medical problems doctor has advised to restrict movement on bike for any purpose. I was planning to buy a car from a very long time but just did not have time to seriously think about it.
So after the news, hunt for a second hand car started and I started discussing with friends / colleagues about their cars and performance. Primarily, we discussed about Alto and Wagon R as many suggested first car should be from a Maruti with no scientific reason behind it. During the course of searching of a used car, an idea struck my mind that let us have a new car rather a pre-owned on. People also suggested the same and advised for a new car.

I contacted few dealers and got different quotes and discounts which I do not remember now. During that time I did not know how to drive a car so couching classes were also included in the budget.

One of my best office buddy suggested not to buy an Alto (no offense intended) rather go for a Wagon R because of the space constraint in Alto + 200 CC more would help in drivability of the car with AC on as compare to 800 CC Alto. Please be informed that he himself owns an Alto.

We took test drive of Wagon R and it was as good or as bad a Wagon R as it was during that time. In fact, my brother took the test drive and I was just sitting at the back.

During that time I saw a Zen Estilo at the showroom and enquired about it. Engine was same + it was Rs. 4K cheaper + I was getting front PWs. So, after a lot of “maatha-pachi” (discussion) with wife, I booked my Estilo in the month of Oct’07 some time and delivery date was 1st Nov’07.

During that time I did not know what was VIN or PDI. So I did not check anything, just negotiated with dealer for the discounts and freezed it at Rs. 3.50 lakhs with following items as complementary. I booked it from Magic Auto Dwarka.

I took a car loan from a nationalized bank, Central Bank of India (CBI). Loan process was little lengthy as I had made 2-3 visits at the branch and the senior manager of the branch also visited my place with me for the physical verification of my place. Apart from these 2-3 trips, it was ok and service was spot on. I seriously did not expect such a response from a nationalized bank and that too from CBI.

I took my brother along to take the delivery as I was new or only had some 20-25kms of experience of driving. Delivery person briefed me about the features and functions of each button and entire process took roughly an hour or so to complete the formalities and understanding the vehicle.
My brother started off and we left the dealership. My place from the dealership was some 5-6 Kms. So I asked my brother to sit with me meanwhile I also feel my car. He readily accepted it and I was driving it. The joy of driving your own first car is something which I cannot express here. You need to feel it on your own and probably you might have felt it during that time of your purchase.

Once I reach home, my brother after having sweets left for his office. And out of joy I took my car as near to my home as possible and because of that I entered in a gali (narrow lane) from there you can only reverse the car and cannot turn it. My wife was standing in the balcony and waving hands but did not realize that I made a biggest goof up of that time. It was a shock of my life because that was the first day when I actually engaged the reverse gear. I was left with no choice but to engage the reverse gear and with the help of side rear view mirrors I was able to bring it back to normal place from there I could take right or left turn to move forward. It took me 20-25 mins to cover some 30 odd meters to reverse it with frequent use of 1st and reverse gear.

Since then I did not face any problem in reversing and always us rear view mirror to reverse rather turning my head.

Since delivery of my car I have covered some 69000+ Kms and counting. Major changes / addition I have made apart from regular service are:

Sony ICE and some 6 speakers 4 on doors and 2 on tray (all speakers local made but serve my purpose).

Garware sun protective screens (paid Rs. 1200/- in 2007, do not remember the name or number) but removed now due to high court verdict.

One stud at left front wheel got damaged during our visit to Bharatpur last Aug’11, very bad roads or we took wrong route. So I had to replace it during the regular service.

And that is it (touchwood)

Well I know any ownership thread is not complete without pictures and now I am realising that I do not have pictures of my ride at all ( I do have some here and there kinda pictures but of my car). Although, we all have seen Zen Estilo in real life but still this weekend I would try and upload few for your eyes. Just incase if you guys are interested.

I have been thinking to write this long term review ever since I completed 50K but for a lazy person like me it is really hard to pen down.

Thanks for reading it.

Thanks Varun for liking it. Yes, I know pictures are required and I shall do the needful by this weekend.

Great. so any mods planned ?

OT : You were missing these days.

Varun560061 said:
Great.. so any mods planned ?
Click to expand...
Ya, I was thinking to go for alloy wheels, front arm rest and fog laps for the show off purpose but I made a mistake in Aug'11. Where I did not opt for up size tyre and stick to 13" one. Now if I have to upsize I would need to buy fresh set of tyres as well

As far as fogs and arm rest are concerned, would see the possibility after the 70K service. Planned coming Saturday (i.e. 26th May).

Well I am always here and reading posts every now and then. But yes I was kinda busy with my work (Paapi pat ka sawal hai bhai).

This was the much awaited ownership review on our forum. Nice to read a straight from the heart experience, Shailinder. You car’s odo reading is a clear evidence that you have become a pro in driving since the day it was bought. I think you were also planning to replace it with another hatchback? Please upload some images soon.

350Z said:
This was the much awaited ownership review on our forum. Nice to read a straight from the heart experience, Shailinder.
Click to expand...
Thanks Vibhor for appreciating it. Yes it was planned a long back.

350Z said:
You car’s odo reading is a clear evidence that you have become a pro in driving since the day it was bought. Please upload some images soon.
Click to expand...
I do not know whether I should consider myself a pro or not but yeah it is going on

. Yes, pictures are planned this weekend. Thanks

350Z said:
I think you were also planning to replace it with another hatchback?
Click to expand...
Well I started of with this point if you remember. I left a note on Skoda Fabia thread or I should say it was my first post and you created a seperate thread on Cooldhaya's advice. http://www.theautomotiveindia.com/forums/automotive-shopper/2193-best-hatchback-long-term-use.html

That idea got diluted somewhere as I am expecting possession of my flat in NCR. After that I would continue my search or fullfill that dream as well. Thanks

Shailinder very nice, honest and unbiased review, liked it very much travelled in my colleagues Estilo yesterday nice car. Wishing you and your family many more happy miles in this car.

Waiting for pics of your ride:)

Indeed, a review which was long awaited.

Nicely written report buddy. Somehow i am happy that the car is serving you well. 69k is something which in itself is an evidence that you have turned into a pro. Cramped rear has always been a downside of most of the cars of Maruti stable.
Waiting for the pics now.

ToughGuy said:
Shailinder very nice, honest and unbiased review, liked it very much travelled in my colleagues Estilo yesterday nice car. Wishing you and your family many more happy miles in this car.

Waiting for pics of your ride:)
Click to expand...
Thanks Toughguy for the comments and well wishes.

Akash said:
Indeed, a review which was long awaited.

Nicely written report buddy. Somehow i am happy that the car is serving you well. 69k is something which in itself is an evidence that you have turned into a pro. Cramped rear has always been a downside of most of the cars of Maruti stable.
Waiting for the pics now.
Click to expand...
Thanks Akash for the comments. They are very encouraging. I seriously do not know whether I can consider myself a pro but yeah it is going on

Pictures are pending from my end. Would upload them soon.

Do you feel difference after shifting to XM1 ?
Also have you changes clutch plate?
What is your servicing cost? (per service)

Surfer said:
Do you feel difference after shifting to XM1 ?
Click to expand...
Well yes there is a remarkable / noticable difference in breaking and road grip. Tyre noise is very less as compare to previous (MRF) tyres.

Surfer said:
Also have you changes clutch plate?
Click to expand...
No, I have not changed the clutch plates so far but yes got an overhauling done at 50K service ( I dont know whether it can be considered as changing the plates). But since this overhauling, there is a small vibration on the paddle if I keep my foot on it and not pressing.

Surfer said:
What is your servicing cost? (per service)
Click to expand...
Aahhh ! For this I have to refer to my bills (I have to literly search for them). But it is around 5-6k per service or more because of Mobil 1 engine oil I use. At 50K service it was 13+K because of overhauling (some 5.5k).

Please find enclosed the pictures of my Estilo. 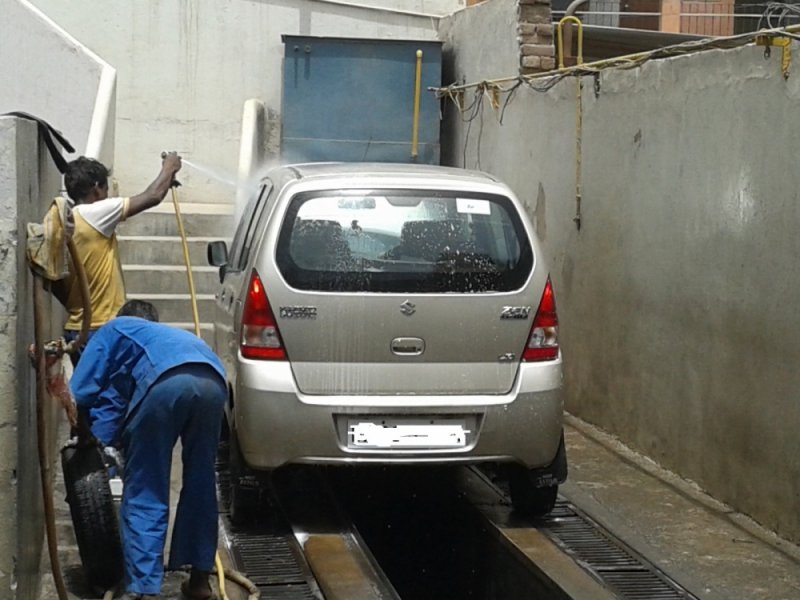 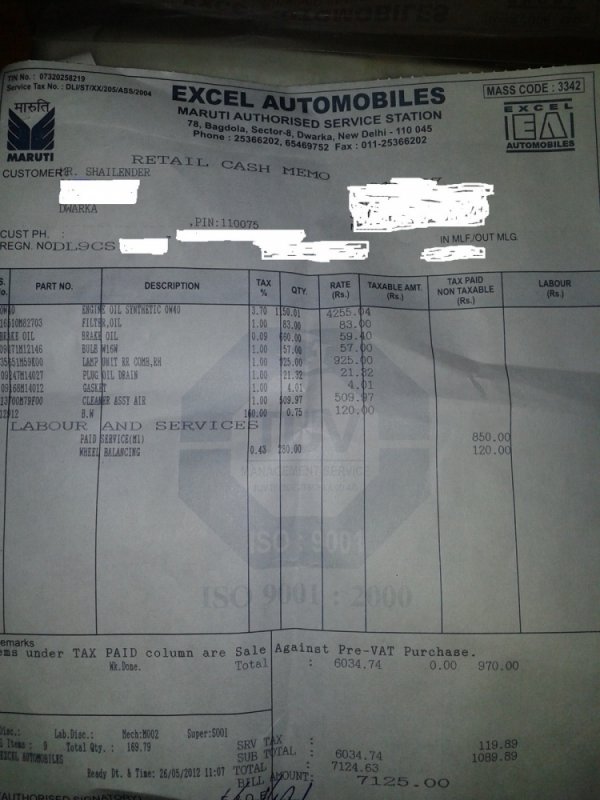 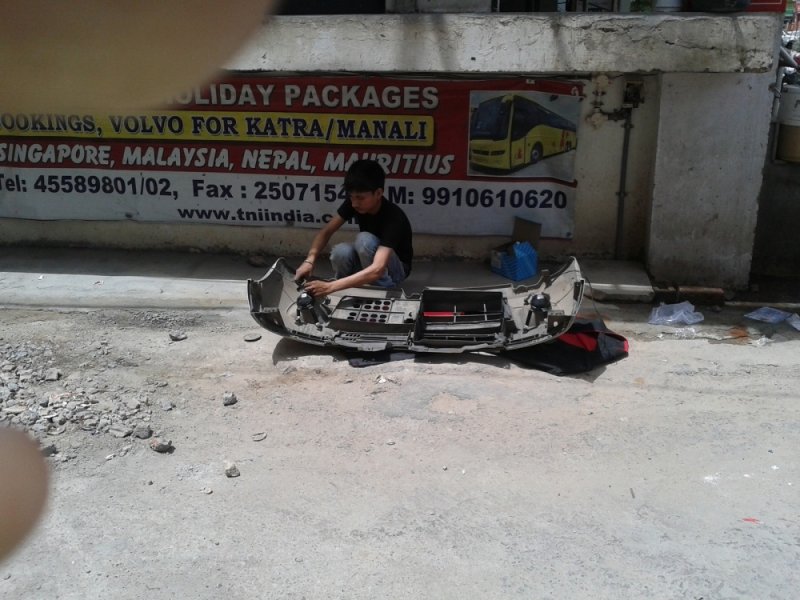 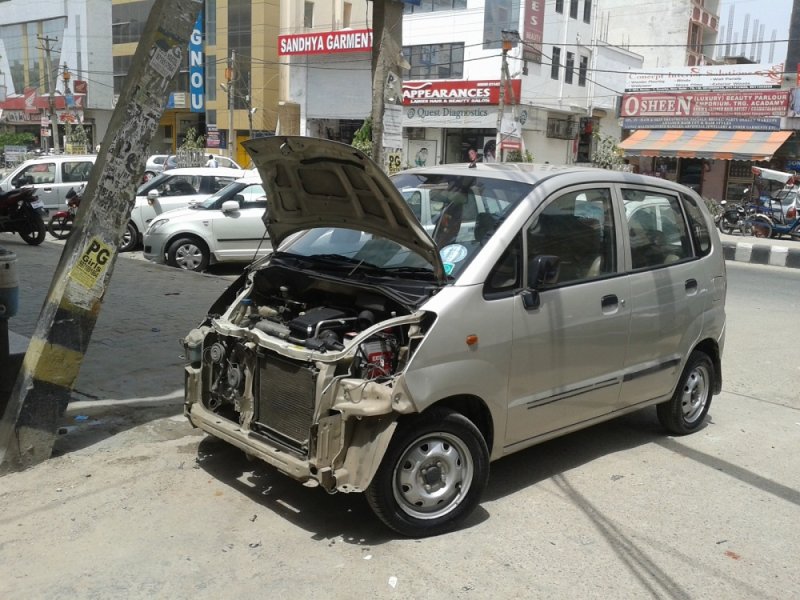 Fog lamp installation. From outside Rs. 750/- 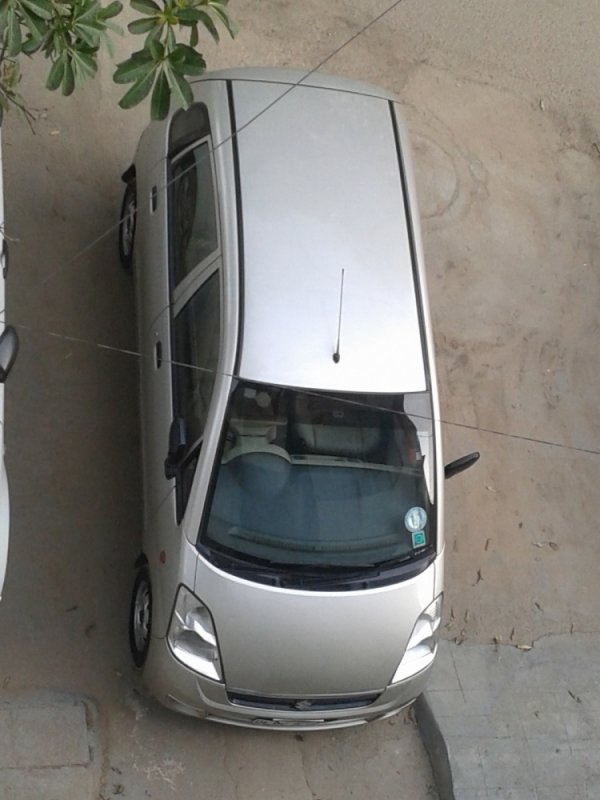 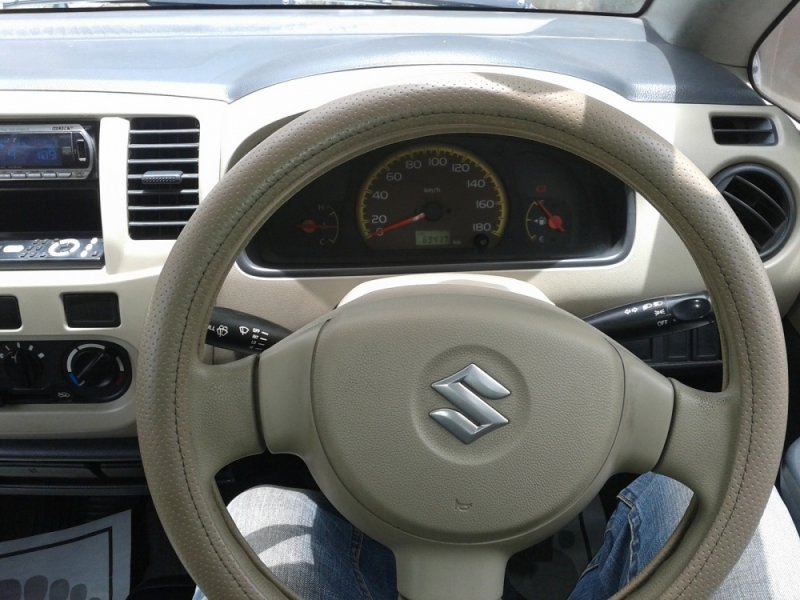 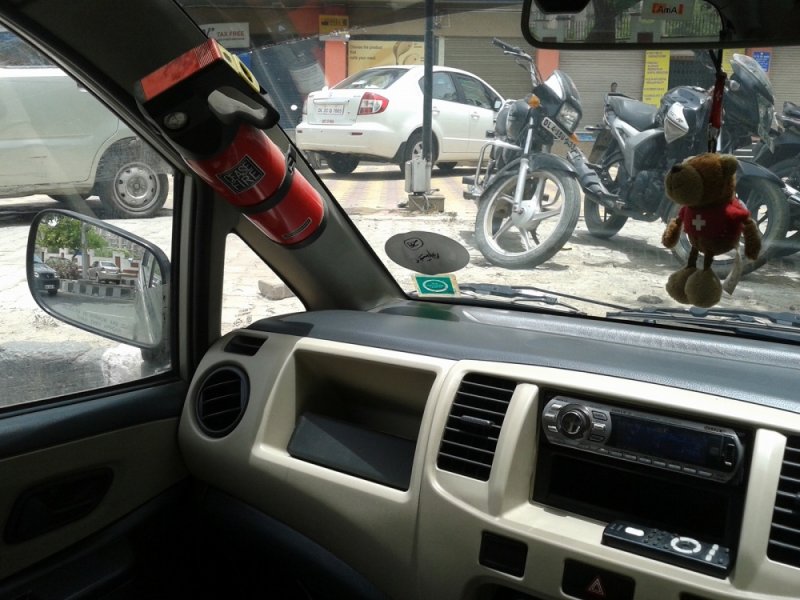 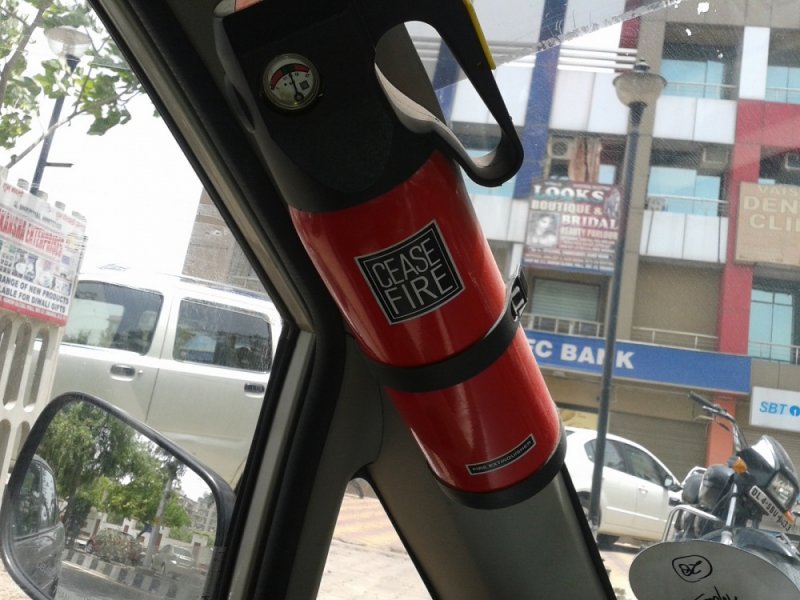 For safety measures I have installed cease fire a year back.