Indian car makers are going places, It's really a proud moment for us. Mahindra and Mahindra has been selected as preferred bidder by SsangYong. More details below by Autocar India:

The preferred bidder status would require it to enter into a MoU with SsangYong Motor Company, followed by a detailed due diligence process.
For those who don’t know, SYMC is a Korean Manufacture of Auto and Aggregates. It sells seven models under five brands which include two large size sedans, four SUVs and one MPV. The company is seen as a major player in the Korean SUV segment having been recorded 1.3 million SUV sales from 1990-2009. It has a considerable dealer presence of about 1,200 dealers around the globe. Speaking on the occasion, Mr. Anand Mahidnra, VC and MD, Mahindra Group said that Korea is one of world’s leading centers of automotive excellence and Ssangyong brings with it a rich legacy of R&D and innovation. Mahindra and Ssangyong will create synergy, which will make us significant global players. By getting selected as the preferred bidder by Ssangyong, Mahindra becomes the second Indian manufacturer after Tata Motors to acquire a foreign automotive company. Tata Motors acquired iconic brands Jaguar and Land Rover in 2008. 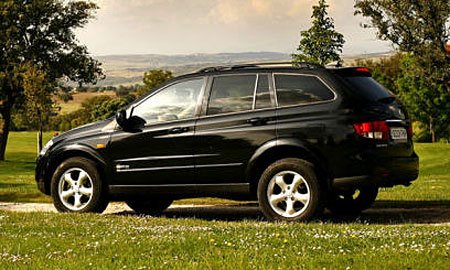 So new products are going to be evolved after this collaboration.

IMO, this tie-up will help mahindra expand in the west.
Ssangyong's dealerships will also retail mahindra.

It was Tata, and now M&M, 2 indian auto giants are making us proud. I am sure in future, we will have great cars on Indian roads.

Then new SUV buyers can wait a little longer and expect a lot of new models?

Great going Indian manufacturers! So can we expect a sedan from Mahindra now?

Mahindra & Mahindra, the largest utility vehicle maker in the Indian market, announced on Tuesday that it has completed the process of acquiring a majority stake in the bankrupt South Korean firm SsangYong Motor Company (SMC). Mahindra & Mahindra now has a 70 percent stake in this Korean SUV maker, for which Mahindra has shelled out $463 million (about Rs 2,105 crore). Mahindra was selected as a preferred bidder in August 2010. SMC will now invest over 240 KRW (nearly Rs 960 crore) on brand building and product development in the current year. Where the investment on product development will be increased by 70 percent, the investment on Brand building will be enhanced by 60 percent.

Speaking from Seoul, M&M President, Automotive and Farm Sector, Pawan Goenka, said, "These investments will be funded by SMC's internal accruals. After the debt restructuring SMC's balance sheet is clean. Although it is unlikely that it will need debt for this investment, but if needed, it can raise."
Click to expand...
Now as the acquisition process has been completed, Mahindra is expected to roll-out some global portfolio SUV’s (Sport Utility Vehicles) of SsangYong in the Indian market in coming months. Courtesy: Cartradeindia.com


Ssangyong’s sales dropped in 2009 due to falling global demand.

​
Mahindra agreed to buy a 70 per cent stake in Ssangyong.South Korea’s smallest carmaker by sales, in November.

Ssangyong said that under its new owner($211m) would be spent on product development and branding this year.

Like Mahindra, SAIC also tried to introduce Ssangyong’s vehicles to its home market, but it failed to turn round the company as the global economic crisis hit demand for SUVs.

Ssangyong brings us the key to global markets with its strong technology base.so Be ready for new SUV models.I hope M&M will make india fly to global market.
Last edited by a moderator: Mar 18, 2011

Good news , so from now on we can see some world-class SUV'S from Mahindra!


This month's Paris Auto Show will see SsangYong lifting the wraps off a new concept study for a range-extender electric crossover named the e-XIV.
The prototype that was teased in these sketches is an evolution of the XIV-2 Concept displayed at the Geneva International Auto Salon this past March, which itself was a three-door version of the XIV-1 Concept from the 2011 Frankfurt Auto Show.

The newest iteration of SsangYong's B-segment CUV (crossover utility vehicle) replaces the XIV-2's 1.6-liter engine with a range-extender drivetrain that uses an electric motor for its motivation with a small petrol engine charging the car's batteries.

The e-XIV also gets a glass roof that not only provides enhanced visibility for passengers, but also incorporates solar cell panels that offer additional energy.

More information on the e-XIV will be released upon its introduction at the Paris Motor Show on September 27.

The Ssangyong e-XIV previews the rival to the EcoSport

The Mahindra owned South Korean utility vehicle specialist Ssangyong will be debuting its third concept of the XIV series called the e-XIV at the Paris motor show.

The concept will be unveiled tomorrow and we have the pictures. The masculine e-XIV has all the traits of a concept car and how much of it makes into production version remains to be seen.

Speaking of the production version, Ssangyong has hinted at the possibility but hasn’t announced any final plans yet.

The manufacturer explains e-XIV means electric-eXciting user Interface Vehicle. The e-XIV is a range extender hybrid crossover is 4.16 meter long, 1.79 m wide and 1.57 m tall and the front and rear wheels are set apart by 2.6 m.

The e-XIV will be propelled by an electric motor and a small petrol engine will charge the battery. More details about the hybrid powertrain will emerge tomorrow.
This Compact SUV concept has just the right recipe to rival the Ford EcoSport and all Ssangyong need to do is keep the production model’s length within four metre to be eligible for the exercise duty concession.

Read more: The Ssangyong e-XIV previews the rival to the EcoSport

“When we bought Ssangyong, we had purchased it keeping all these things behind us. So, there is nothing that we have done in terms of layoffs after we took over. However, our intention is as the business conditions improve and our sales volumes go up, we will start employing some of these people back. That’s our plan... but we cannot do it overnight,” he said.

Speaking to the media after launching M&M’s compact SUV ‘Quanto’ in the Hyderabad market on Tuesday, Goenka said though Ssangyong’s overall sales volumes grew last year, the Korean and European markets, the not-so-important markets for M&M but key for Ssangyong, had seen a degrowth.

“The overall sales volumes have been flat this year, as compared to last year. Only when the volumes grow will we be able to employ all these people back. We should start in the next two to three months, in a small manner. It will probably take two to three years to reinstate the entire staff,” he added.

The premium SUV from Ssangyong’s stable, Rexton, the first of the three products that have been lined up by M&M and the Korean company, will be rolled out in October this year, Goenka said.

“We are investing close to Rs 1,500 crore for the development of Rexton alone. While we will be announcing the second product shortly, the third one is in the planning stage,” he said, adding that equally important for M&M was the three-and four-cylinder engine development programme that it was doing with Ssangyong, for both the companies’ diesel and petrol vehicles.

Goenka said that M&M will formally start production at its tractor plant in Zaheerabad, Andhra Pradesh, in three months from now. The company had established the tractor plant on 100 acre with an investment of Rs 300 crore.

The Zaheerabad will manufacture tractor models in the range of 30 horse power (HP) to 90 HP for both domestic as well as the export markets, with all models conforming to emission norms prevalent in India, Europe and the US.

“The plant has an installed capacity of 100,000 tractors a year, which can be scaled up to meet additional demand,” he said, adding that the Zaheerabad facility was going in the direction of becoming an automotive hub.

Replying to a query on the Competition Commission of India (CCI) slapping show-cause notices on 17 automobile manufacturers, including M&M, on an alleged anti-competitive practice of selling spare parts at higher prices to consumers, Goenka said the company was still trying to understand the report that CCI had sent to it.

“I think the concern is not more on the pricing but is more on restricting distribution of spare parts. CCI’s contention is that the spare parts should be freely available everywhere, which is where auto companies have different polices. M&M, except for Scorpio and Verito, makes the spare parts available everywhere. Therefore, we think that we are perfectly fine. We, however, will take a look and talk to them (CCI) and understand where the problem is coming from,” he added.

Mahindra Invests 1,500 Crores with Ssangyong to Bring Out a New Car

With the wait for the India debut of Ssangyong Motor (SMC), Mahindra (who now owns the Koran major) announced that they have invested Rs. 1,500 Crores in order to bring up a new product. M&M holds as much as 70 percent stake in SMC.

At the eve of launching the Quanto, Mr. Pawan Goenka, President, Automotive and arm Sector, M&M, told reporters: “We expect to see three products jointly developed with Ssangyong. There, we are investing close to Korean Won 300 billion which is almost Rs 1,500 crore”.

“This is over next three years and this is only for one product with Ssangyong. There will be more investment for other products”, he also added.


This is the Older Rexton which was caught in Pune. Click on the image to see more pics
Mr. Goenka also confirmed that Rexton SUV will soon be launched in the Indian market and this will be the first ever product under the Ssangyong badge. He also revealed that M&M and SMC is also working on a new engine platform for both petrol and diesel. These engines will be used by both the companies.

So, the good part is, with the debut of the Rexton, we can also expect a new engine from the M&M – SMC JV!

Ssangyong Motors, which is the part of the US$ 15.4 billion Mahindra Group, has announced that the company sold a total of 10,147 vehicles in the month of September this year, 4, 036 in domestic sales and 6,111 in the exports including CKD. There has been a sales growth of 11% in a comparison with the last month. This was made happen because of the increased number of the working days and decreased back orders from some refreshed models.

Lee Yoo-il, CEO of Ssangyong Motor, said, “The sales show positive recovery as the number of working days increased and the back orders issue from some assembly lines has been solved.” He added, “Still there are difficulties such as the economic depression in the European market. However, Ssangyong Motor will expand its global sales by using a differentiated marketing strategy and reinforced export product line-ups.”

The Export figure of Ssangyong has stood at 6,111 vehicles with a 12.5% increase from the last month. For the first time in three months since June, the company has sold more than 6,000 vehicles for export. But if compared to the same period of the last year, exports decreased by 6% due to the sluggish global auto market and the European economic depression.

Domestic sales in Korea were at 4,036 vehicles and an increase of 34.4% of sales growth if compared to the same period of the previous year which was 8.9% higher if compared to the last month. This was due to the positive upward trend in sales of the refreshed models like that of Korando Sports. Also this is been the first time since the month of July that the company has sold more than 4000 vehicles in the Korean market.

The company is planning to increase its sales by organizing various customer participation events.
You must log in or register to reply here.