“The trucks will be competitively priced,” he said, adding the JV aims to be a “significant” player in the country’s commercial vehicle market, which has shown signs of recover last month after recording de-growth in the past three quarters. “It’s going to be a difficult task. We just want to do everything right,” said Mr Goenka. The JV has already invested Rs 1,200 crore, and it plans to raise another Rs 500-600 crore long-term debt from Indian banks in the next 3-6 months, said Mr Goenka.

The funds raised will be used for product development, tools and dyes at the companies greenfield unit in Chakan to produce the medium and heavy trucks with capacity of more than 3.5 tonne. The company will continue to produce vehicles with lower capacity at its Zaheerabad, Andhra Pradesh plant. Two of M&Ms products, the Loadking and Tourister have been transferred to the new JV.

In 2005, M&M, International Truck and Engine Corporation, the operating company of Navistar, had entered into a JV to manufacture light, medium and heavy commercial vehicles for India as well as export markets.

India’s largest sports-utility vehicle maker will make and sell engines under a separate venture called Mahindra Navistar Engines (P). “We plan to start exporting engines after a year. The truck exports would follow shortly,” Rakesh Kalra, managing director of Mahindra Navistar Automotives, said. Mahindra Navisar Engines on Monday unveiled the Maxxforce 7.2 litre diesel engine, which will power the M&M line up of CVs and buses. Initially, the engines will be used for the CV range, followed by other applications like marine products.
Click to expand...

Do anything Mahindra! Just make sure this truck runs over the Xylo!

Rajeev, now you can get a Mahindra truck! Mod it into a bus!

Some trucks from Navistar, hope Mahindra does something similar -

The truck from Navistar is super cool.

Atleast bring 50% of this Mahindra!

MaxxForce® 7.2 diesel engine, the most modern engine in its class, will power Mahindra Navistar’s new range of M & HCV trucks and buses which will be introduced in the Indian market in the coming months.

The MaxxForce® 7.2 engines will be manufactured at a state-of-the-art engine manufacturing plant at Chakan in Maharashtra. The plant will be spread across 23 acres of land and is equipped for serial production of medium speed diesel engines.

“The MaxxForce® 7.2 engine is known the world over as a high performance, reliable and fuel efficient engine and it is now all set to redefine the M & HCV (Medium & Heavy Commercial Vehicles) segment in India. The engine has been designed for rugged operating environments and modified substantially for Indian truck requirements which will make it the driving force behind our forthcoming range of M & HCV Trucks. Mahindra & Mahindra has always been at the forefront of technological innovation and by partnering with Navistar Inc., the world leader in diesel engine technology, we are well positioned to revolutionise the trucking business in India,” said Dr. Pawan Goenka, President Automotive Sector, Mahindra & Mahindra Ltd.
Click to expand...
Details

These trucks are the ones which are/were in 18 wheels of steel. Looks awesome!!

Mahindra Navistar is launching on 4th Jan.
I saw this adv in TOI today. 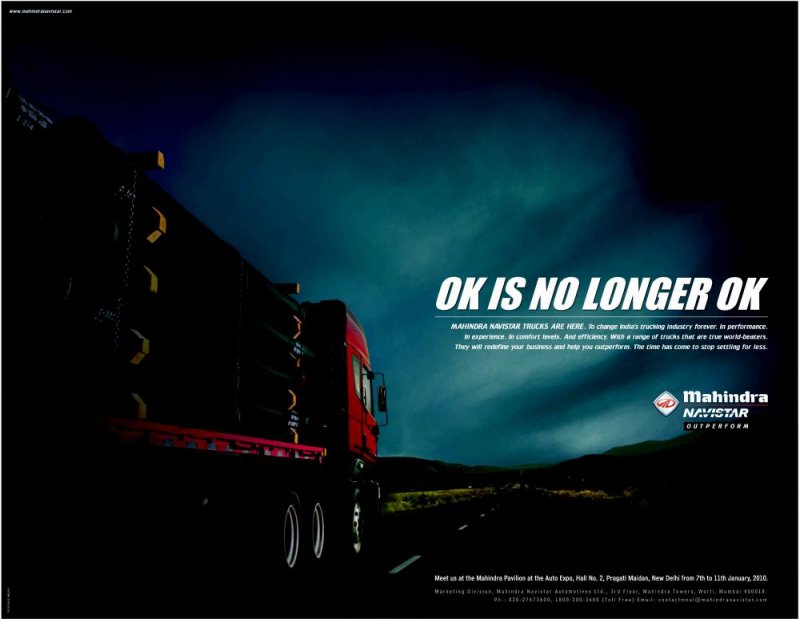 Looks a lot better than the current trucks of other comps.

Hey, The Truck Segment is warming up as well. Luxury car makers like Mercedes Benz have already stepped-in with Actros range in India and AMWs, Volvos etc were being imported much before. Though, Mahindra won't rival with them in any way but could prove to be a cheap alternative and competition to Tatas. Most of the Local Made Trucks in India doesn't sport those attractive looks as foreign counterparts. Now, Few would say for Truck Drivers it doesn't matter but for the firms running them, It matters somewhere. Hope this one will not look like Gio from front!

By the teaser picture, it looks to be very good looking. Tata - Be ready!

Double page ad too ... they are hoping to make a big hit!!

I dont think TATA will be in any way heeding to this news. It will launch when it has planned too. They dont get excited with markets.

"We hope next year will see the turnaround of trucking business in India," Pawan Goenka, Mahindra's president for the automotive sector, told a news conference ahead of an auto show in the Indian capital.
Mahindra will initially launch two variants of Navistar trucks and will offer five more by the end of 2010, Rakesh Kalra, managing director of the joint venture said.
Click to expand...

okay, this truck looks much less expensive than the ones RSM had posted, so it MAY fine the market in india, time will tell.
You must log in or register to reply here.