We never thought it was possible but a scale-model of a Lamborghini Aventador crafted by a former Mercedes-Benz engineer is reportedly more expensive than the costly model it's actually based on. According to German online news portal Chiemgau-Online.de, model car builder Robert Gülpen created the 1:8 scale Aventador out of carbon fiber, just like the actual car. Incorporated into the scale model car, however, are several precious metals and stones. The diamonds on the seats, steering wheel and headlights, and the gold used on the wheels supposedly have a combined value of €2 million (nearly P120 million) already.

"This is a high-tech work of art," Gülpen said in reports. "I wanted to do something unique, something that has not existed until now." The scale model Aventador is currently on display at the Frankfurt Motor Show behind a bulletproof glass case that's monitored by sophisticated electronic safeguards. In December, the scale model could become 2011's most expensive Christmas gift as Sotheby's is planning to auction it off in either Dubai or New York with a starting price of €3.5 million or over P208 million. Gülpen, though, is willing to sell it to anyone who can't wait for the auction at a kingly sum of €4.5 million (roughly P269 million). With over 500 hours spent crafting the model, Gülpen calls his latest work a product of "pure craftsmanship." How much would you want to shell out for this set of wheels? 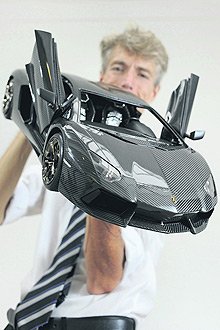 well most of people buy scale models of those cars which they cant afford..whats use of buying that scale model which is more expensive then car itself??

This scale model has been intentionally designed to be expensive using carbon fibre just for the sake of doing something unique; otherwise, I don’t see a point of having it. And as far as making something costliest in the world is concerned, it’s heck a no brainer. In today’s time, sky is the limit. If one actually wants to do something unique, then why not attempt to come up with a product which is affordable as well as reliable?

After buying it there should be a label under it

Umang said:
well most of people buy scale models of those cars which they cant afford..whats use of buying that scale model which is more expensive then car itself??

Click to expand...
Well i guess a filthy rich person would gift one to a kid who is not old enough to drive,but then i guess one can buy the real one & put a driver in it to take the kid around

Anyways attaching the finished product pic,no idea how much it went for though,turns out the same person had made a Bugatti Veyron model the previous year.