looks like everyone wants to take the throne from the Veyron...

Jaguar has decided to turn its hugely impressive jet-powered Jaguar C-X75 hybrid concept into a £700,000, Bugatti Veyron-beating flagship for production in 2013 – and is enlisting the aid of the Williams F1 team to do it.

The deal, a momentous decision that will affect everything Jaguar does for decades to come, was announced in London this morning by Tata chief Carl-Peter Forster, with Sir Frank Williams in attendance.

It will involve a direct technology transfer between the partners, especially over lightweight structures, and brings Tata ever closer to the F1 connection that has often been rumoured.

Jaguar is planning 250 cars, and continues to work on the jet-powered concept for C-X75. It will eventually sell a limited number of them, but the there are strong indications that the majority of cars will use a 'highly boosted' 1.6-litre engine related to the four-cylinder engine Williams and other F1 teams will adopt from 2013. Williams currently uses a Cosworth engine, made in Northamptonshire.

The production Jaguar C-X75 (the concept name is being kept "for the time being", but won't necessarily make production) will have plug-in electric drive motors on the front and rear axles and thus have four-wheel-drive.

No detail of the powertrain is available, but it seems probable that the four-cylinder engine, which could easily produce 500bhp-plus, will power the wheels in parallel with the electric motors. 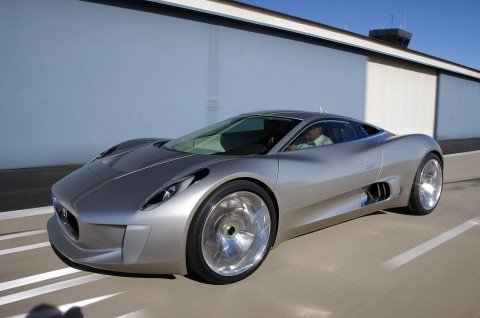 buggati has been ruling from long now..now they should buckle up 'coz lotsa serious competition coming!! only one look at rear of this jaguar will hypnotize anyone!!

Looks like every manufacturer is keen to dethrone the Veyron.
Somehow the side profile looks too similar to the old gen Lambos, and like Umang rightly said, the rear has some dangerous styling.

When Jaguar confirmed production for the C-X75 back in May, no details were provided about its powertrain. Now, Jaguar has confirmed to British magazine Autocar that the supercar will be powered by a powerful petrol-electric hybrid system producing approximately 500 bhp (373 kW / 507 PS).

The C-X75 will use an "extraordinary" supercharged and turbocharged 1.6-liter four-cylinder engine capable of revving to 10,000rpm. Despite this, Jaguar has given it plug-in range-extended capability via two electric motors each positioned on the front and rear axles. The motors will be powered by a liquid-cooled 200 kg (441 lbs) battery pack for an electric-only range of 60 km (37 mph) while still performing the 0-60 mph sprint in 6.0 seconds. When the petrol engine is utilized, a top speed of 200mph (322 km/h) and 0-60 mph time of less than 3.0 seconds will be achieved, according to the C-X75's development team.

Jaguar has reportedly begun construction of five C-X75 prototypes that will be used to evaluate the car's performance.
According to engineering director Bob Joyce, the company "wants to put this car into volume production but it has to meet all its targets for positioning and price."
The production model will feature some styling tweaks, but Joyce hinted "It's absolutely the same shape and form, but with more edge and refinement."
While the concept used turbine engines, the production model will feature a super- and turbocharged 1.6-liter four-cylinder that develops more than 500 hp (373 kW / 507 PS). It will be backed up by two electric motors, an automated manual transmission and a Williams F1 Kinetic Energy Recovery System (KERS). This should enable the supercar to accelerate from 0-60 mph in less than three seconds, travel 60 km (37 miles) on electricity alone and have CO2 emissions of less than 100 g/km.
If everything goes according to plan, the production C-X75 will be launched in 2014 and cost between £700,000-900,000 ($1.1-1.4 million / €878,555-1.1 million).

The Jaguar CX-75 concept brought to the table, a novel idea of future hypercar with its unique looks and running gear technology.

It is sad to know that Jaguar has decided not to push ahead with the development of the car since the British manufacturer thinks such a high tech and expensive car doesn’t have a relevance in today’s economic crisis which forces even the richest to take austerity measures.

Jaguar insists that they are not facing any technical issues. Mr. Adrain Hallmark, Jaguar’s brand director told Autocar.co.uk that, “We feel we could make the car work, but looking at the global austerity measures in place now, it seems the wrong time to launch an £800,000 to £1 million supercar.”


Read more: Jaguar drops plans to build CX-75 hypercar
You must log in or register to reply here.