"Click clack ding" -When did you last hear this sound?

Still perplexed about what I am Talking about? I am talking about the humble typewriter.In its heyday, every office had one and was as ubiquitous as Computer is today.
Passing typewriter exam was mandatory if you wanted permanent job in Government ( as a steno) for this one used to go typing schools to learn ,sharpen skills and achieve top speed - I am not talking top speed of car but how fast could you type?

If there was error in he document the humble eraser white fluid came to rescue.There were many variants in its long history including portable type ( they were like laptops for our grandfathers) and electronic types.
There were imported ones like Remington which owners kept it like a prized possession and was much sought after.

Every document from notary public documents to your train ticket everything passed through them.At one time, when World was washed with modern typewriters, India was playing catch up the world

A foot note - Godrej and Boyce made set up factory to manufacturer India's first Ingenious typewriter in 1955.
I end this thread with a quote:

" Godrej Typewriter is a symbol of Independent and Industrialized India"

though it looks fantastic to me but i havent used or touched typewriter yet. i have seen people using it . to my amazement could anybody tell why there is "ding" sound in it?

@jayadev -The ding sound IMO represented the sound when you moved the arm of typewriter after finishing the sentences.

CORTINA said:
@jayadev -The ding sound IMO represented the sound when you moved the arm of typewriter after finishing the sentences.
Click to expand...
Yup. He is right.

I joined the classes to improve my typing skills.

Ah. Yet another topic which typically brings back the nostalgia. I earlier read the news about Godrej shutting down their last typewriter factory in the world. This shows how fast the world is moving ahead and I’m sure most of us here must be familiar with the funny ‘tring-ding’ sound of the typewriter. Surprisingly, there is still a small typewriter coaching center nearby my place and a lot of people still do come there to learn. Though those days are not far anymore when this big box with a set of keys will be kept as a showcase in the museums. Let us have a last look. 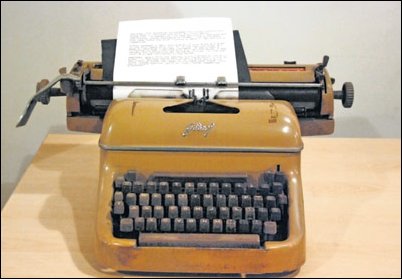 Aah yes i still remember that sound! When i was a kid accompanying my dad to his office , i could hear this sound coming from various shops around , but sadly all those shops have moved to computers now.

My uncle still has a typewriter at his place. As a matter of fact, i learnt typing on the it. Whenever i used to visit his place, he asked me to type his office letter which i enjoyed doing.

Excellent thread Cortina. 5 Stars from my side

Thank you all for such warm replies

When I was young I used to go to my mother's office after school hours and spent my time their playing with spare typewriter. till office closes.The irony is that now in the same office computers have replaced the typewriter but there is no spare computer to play with

Recollects some memories of type write in my dad's office.

Loads of type writer were there.
i used to play with them. dad used to feed paper and make all arrange ments.
they even had mechanics to repair them.

even a compact one was ... no... is still in our home.
it has dad's name engraved on them.
You must log in or register to reply here.