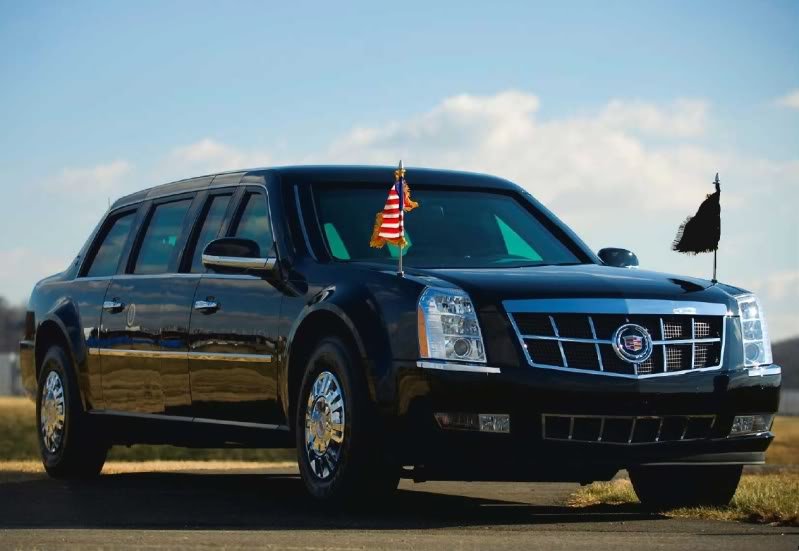 Mr. Barack Obama, The President of United States, was is news when yesterday his Cadillac got stuck while making its way out of the Dublin Embassy.
The Presidents Cadillac nicknamed "Beast" is known to be the world’s safest car and can endure bullet and bomb attacks.
Have a look at the video by Russian Today.

That was funny! they would have avoided if they TDed this one in India

It even looked like the bmw was going to hit the ramp. I guess now the Beast will be getting some airbags.

=_=! it got stuck in that small speed breaker . As TheTraveller said they sould have tested here in india first if car can survive indian roads its good to go any where

mastersquall said:
=_=! it got stuck in that small speed breaker . As TheTraveller said they sould have tested here in india first if car can survive indian roads its good to go any where
Click to expand...
well said!

haha i found this news very funny! i was seeing on some indian news channel but as usual, they were over-hyping the whole scene. but it is still a car and cars can occasionally get stuck at speed breakers so what is the big deal here?

The incident highlighted how vulnerable the safest Limo in the world is.Also this car is built on a top kick truck chassis yet the ground clearance is low reminds me of 1950s Cars which were too low for speed breaker.

its time we gifted some ambassador cars to the yankees for their presidential limousines.

soon they will come up with some height adjustable system in it, air suspension or something like that for sure

that was like sudden , too much weight in front ? !!


useless cars!! even a nano can go over that! hehe

Obama should hire me. I would lift the rear up and get it over the ramp. Hiring whities they are useless. Hire some big black men.

Ouch. That was a real bad day for that Cadillac. Apparently, the car has fairly well ground clearance (and perhaps more than 7 Series?) but that’s not the problem here. It’s clearly visible in the video that longer wheelbase is the culprit here and not the ground clearance of the car. Nonetheless, all is well if the end is well.

Hilarious, the most important Cadillac in US, stuck on a speed-braker in Ireland | Power to you Ireland

well this was funny but theres no assurance obama was in it 'coz there are more cadillacs behind it like this! and anybody saw they hid recue part for public with big truck??

Guys, I couldn't stop laughing when I read this news. I am sure GM-Cadillac made 'Beast' will now fare poor in JD Power rankings.

US President Barack Obama lost his first choice of wheels, after one of his hulking armoured limousines broke down in Israel.

The US Secret Service was forced to fly another vehicle in from Jordan where it was waiting for the US leader, who will travel to the neighbouring country after wrapping up his visit to the Jewish state.

"This is why we bring multiple vehicles and a mechanic on all trips," Donovan said, while saying the president's itinerary was not affected by the breakdown, which happened before he arrived in Israel.