hey guys aston martin has shown plans to enter india after seeing BMWs, Mercs, Lamborghinis on our roads, we could spot Astons also

Are you ready for the Bond Car’s assault as of yet? The new India just says yes and the British luxury sports car maker Aston Martin seems to have heard about it as they have planned to bring their goods to India pretty soon.

But Aston Martin’s foray to India certainly seems to be a welcome sign for all of us car lovers. Aston Martin is supposed to be in talks with the potential dealers in India but still has not appointed one as of yet. Aston Martin also are contemplating and evaluating the models it wants to launch in India.

It must be noticed that the Indian car market is growing bigger day by day and lot many global car makers have already rushed to India to set shop here and produce their products. India has all of a sudden become the luxury car hub after the global meltdown which affected the traditional luxury car market in the Middle-East, U.S and Europe.

Luxury car sales were the only bright spot for auto companies during the slowdown in 2009. Sales at BMW India Pvt. Ltd have risen 28 per cent this fiscal year to 2,627 units, while Audi India sold 977 units, a growth of 6 per cent. Mercedes-Benz India Ltd, however, saw its sales fall 2 per cent to 2,478 units.

Aston Martin plans to exploit the underdeveloped sense of loyalty among Indian buyers to luxury cars.

The car maker was a part of Ford Motor Company till 2007, when it was sold to a joint venture company co-owned by businessmen David Richards and John Sinders and Investment Dar and Adeem Investment of Kuwait for around Rs4,000 crore at present. Under the new management, developing markets have become a priority, with the company adding dealers in China, Russia and West Asia.
Click to expand...
Article: carazoo.com

Cause for more heartburn!!

Wow great that more and more manufacturers are targeting India now. Seems like India is on a rise after the recession. But Aston martin needs to work hard to reach the levels of BMW'S and Merc's! But am sure they will achieve it soon!!

This is good news & many petrolheads will be happy now!

With proton making its way, I think whole automotive world is keen on Indian Market.

Kudos to Aston & would love to see DB9 as their initial model in India.

Aston Martin, the car that James Bond made famous through many Ian Fleming flicks, will set the roads of India afire by the end of this year, albeit at a hefty price tag of up to Rs 3 crore. 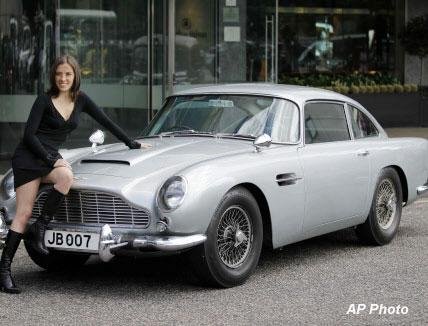 The UK-based carmaker is understood to be gearing up to launch its vehicles in India, and has tied up with Infinity Cars to open its first showroom in Mumbai.

Aston Martin to officially launch in India on 15th April

Gaydon based British exotic car maker Aston Martin, the maker of some of the most achingly beautiful and sensationally swift cars in the world will officially be launching its cars in India on April 15. The company will bring its cars to India in association with Mumbai based Infinity Group. The company also has BMWs dealership in Mumbai and Indore, and is into everything high-end that you could possibly imagine – from yachts to ultra expensive cars. The launch will happen at the Trident hotel in Mumbai.
The details about the models to be launched and the price have obviously not been divulged, but expect the prices of the car to range from Rs 1.2 to 3.5 crore rupees in the Indian market.
Click to expand...
Source: Motoroids

re: Aston(ishing) Cars Might Debut in India; Official launch on 15th April

Rs 2.8 crore for the DBS makes no sense. After all, it has nothing much in it to justify the 80 lakhs premium Aston is asking us to pay over the DB9 (if the prices specified by Economic times are to be believed). As expected, the V8 vantage will be the hot seller.

Id rather take the Maserati Grancabrio or the Granturismo instead
T

I bet aston is making atleast a 12 crore profit on each.

BTW, 1 good reason to buy this over a veyron.
A

Aston has launched the entire range EXCEPT the cygnet.

Punjab has always been a fertile ground for the luxury car makers. Most of the luxury car makers who have entered the market in India definitely have a presence in Punjab owing to the sheeer demand for these luxury toys. Now it has been reported in Business Standard that the British luxury car maker Aston Martin buoyed by the response from the Indian market is now targeting Chandigarh and Punjab.
According to the report, the company has showcased its latest luxury sports car ‘Vanquish’ in Chandigarh, the third city to be selected for the purpose. The first deliveries of the new sports car are expected to begin in early 2013 and with the company looking at Chandigarh and Punjab as potential markets. Priced at Rs 3.85 crore, the Vanquish is powered by a 6.0 litre, V12 naturally aspirated petrol engine that produces a peak power of 565bhp at 6,750 rpm and generates a peak torque of 620 Nm at 5,500 rpm. Further, the car touches 0-100 in just 4.1 seconds with a top speed of 295 Kmph.

Sanjeev Hazari , director, Aston Martin, New Delhi was quoted as saying “I am delighted to be unveiling Aston Martin’s newest and most technically advanced car yet – the new Vanquish in Chandigarh. The new Vanquish mixes beautiful design with impressive technology such as the superb new infotainment system. This is the latest incarnation of everything Aston Martin knows, informed and developed from One-77. The first deliveries of the new sports car are expected to begin in the early 2013 and we see Chandigarh and Punjab as potential markets for the buyers of this luxury car.”

The report stated that Punjab is one of the biggest market for luxury cars like BMW, Audi, Mercedes, Volvo among others. Further, in order to tap high net worth individuals, earlier, another world-famous British car maker Rolls-Royce Motor appointed its dealer in Chandigarh.

Aston Martin sets its eyes on Punjab in India | WheelsUnplugged
You must log in or register to reply here.