Your Thoughts on Apple iPhone 5?

will rule the market

Guys anyone who is interested in getting the Iphone 5 here is a good news for you. Iphone 5 is available for pre-order in India now and Apple will start shipping the phones in November.

Apple iPhone 5 is now available for pre-orders in India and will start shipping in the first week of November. Online retailer Infibeam has listed the 16GB version of the latest iPhone on its website and is taking pre-orders for advance booking amount of Rs 5,000.

Though Infibeam has not mentioned the price of the device, its iPhone 5 web page states that the remaining amount will be collected from buyers at the time of launch of the device. Buyers will have the option to pay the remaining amount via cash on delivery (CoD), debit card and credit card. According to a company executive, the booking amount will be refunded for those who are unable to pay the full amount at the time of launch.

iPhone 5 is widely expected to be roll out in India in the next few days, although Apple has consistently declined to announce a launch date in the country. According to sources, the company may price the device between Rs 46,000 and Rs 61,000, depending on the variant.

Over the past month, Apple has twice cut the pricing of the iPhone 4 and iPhone 4S - the two older iPhones, marking a new first with the company. It also discontinued the three-year-old iPhone 3GS, in line with its worldwide practice.

Apple iPhone 5, unveiled on September 12 this year, is the world's fastest selling smartphone and clocked sales of 5 million units over the first weekend. It features a 4-inch touchscreen with Retina Display technology and runs on A6 processor. The phone has Siri digital voice assistant, iOS 6, 8-pin Lightning dock, 8MP iSight rear camera with LED flash and 4G LTE compatibility.
Click to expand...
Source: http://www.theautomotiveindia.com/forums/gadgets-more/9277-your-thoughts-apple-iphone-5-a-6.html
Last edited by a moderator: Oct 26, 2012

It is said to be released in India on Nov 2nd. 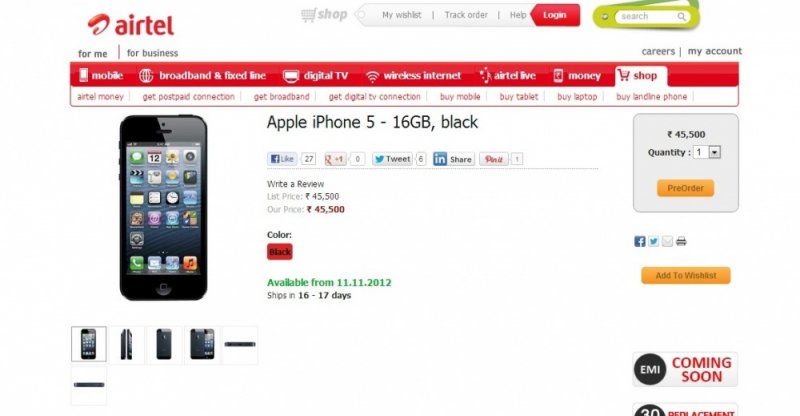 UK people are a big fan of Apple products. Maybe that is the reason the iPhone released here long back.

Being totally honest, if you are not an Apple fan, DONT BUY the iPhone 5. Except the brand value of Apple, there is nothing much special in that phone. The Note2 and even my much cheaper Xperia beats it in pretty much all departments.

Most Apple owners like to talk about how fluid and fast the iPhone's UI is. On a side by side comparison, there is no difference noticed in the Android and the iOS. If anything, the Android Jellybean in Note2 is even better than the iOS.

The iPhone5 here competes with the Samsung Galaxy Note2 and Sony Xperia Z, its in the same price range. I will close my eyes and pick the Xperia Z. Its the most beautiful phone I have seen in a long time. I personally feel it looks much more classier than the iPhone and the UI is simply much better. Speed tests also reveal that the Z is a much better performer than the Note2 and the iPhone. You get a bigger screen, more power and better camera, so I dont think iPhone stands a chance... except if you are a fan of Apple.

Ha ha raj I am reading this post on iPhone 5 my bro brought a new black iPhone 5;-)

Purple haze issue will post the pic I clicked today morning.
There is no issue at all.
You must log in or register to reply here.