Your Car’s Accidents or Break-Down Experiences

Everyone who owns a car or bike in India gets a scratch or a dent sometime or the other,but some stories on how it happened can be so odd & ridiculous it can make an interesting topic or read & am sure many of you have such incidents which you can share!

First up is an incident where my moms car(a Hyundai Santro Xing ) was parked at her friends drive way,when she returned she noticed a small crack on the windshield & after it grew & we had to replace the windshield,when my mom told her friend about it she explained how our windshield cracked,turns out a family upstairs was having an argument & in a fit of rage one of them threw a watch out of the window which landed on our car windshield,what are the odds of that ,after my mom had left they had confessed to my moms friend,thats how she learnt of it.

Another incident with moms car(santro Xing)was when I noticed the left door would with some noise,thats when I noticed the running board had some damage,it looked like the car had gone over a rock,later I learnt my cousin bro who was a Learner had taken my moms car to park while at his place & he fumbled & drove the car up his house steps!!!


An incident when my car(swift 1.3 petrol) was brand new,I had parked it at my friends place as I was out of town for a few weeks,when I returned the car had alot of dust on it & noticed some bird droppings on the front bumper,later I realized that it was not bird droppings but the bumper was exposed after the paint was chipped off,turns out my friends Saint Bernard(a huge 80kg dog) had taken a liking to my cars front bumper & was chewing on it from every angle,especially the front numb plate,I wonder if anyone has every had that one before???

Once when I was leaving a marriage in my Swift & there seemed to be some brawl near the parking lot as I drove past the crowd refused to move standing in front of the car & looking at the brawl,one slum girl(there was a slum near by) stood in front with no care to my honking,that when I hear a huge thump on my left & the car shook,the watch man tells me to go ahead but I get out & see a fellow on the floor next to my car,3 people had slammed him against my car so hard that there was a dent on it & this guy could barely move,I got angry & ask the watch man to show who are those people that damaged my car,whole crowd scatters including the fellow who got it(he crawled away actually).

ROFL the last one is Hilarious Prads, Few months ago some idiot hit my bike which was parked in front of my Grandma's home, he ran off, we didn't hear it happening & the only person that heard it happening was my grandmom there was lot of commotion in the house when this happened, luckily not much damage just few minor scratches.

Another time I was at a signal & a car idiot (think it was Zen) was in front of me who wasn't moving, I crossed him & was just moving ahead looking at him, just then an idiot on a motorcycle came from left going towards right, he was in my path & bam! we got tangled, I lost my balance as my foot peg went under his bike (now don't ask me how it happened) I fell & well my handle got bent & my right indicator got damged grrrrrr
T

just ROFL at above experiences. but got some of my own.

Another time was when we, kids, were playing tag. One guy was chasing me. I was so inclined on building a gap on him that i didnt notice where i was running. I ended up head first in to a Ford Ranger. THe ranger got a dent. I fell unconcious. but my friends carried me away before the owner actually came out. :P

When I was a school boy,myself & my friend travelled in my ranger cycle to reach home. adjasent to my street one new Amby were parked. I was riding the cycle & he was sitting at rear. I asked him to touch the car if he can & I ride the cycle few meters away from the car.

He bend to touch the car from cycle. I lost my balance & my Ranger cycle handle bar made a long line from rear door to front of AMby. after hearing the screach sound the owner of the car came out from home. But myself & my friend started to ran by pulling my cycle. after reached home i parked my cycle in back side of my home & avoided that route for next one month from that day.

Thank god,Nothing happend to my cycle

Two kids on a kinetic honda did that to my Santro leaving a long line on the side of the car,but dint bother cos the car a literally scratches everywhere thanks to my over excited pets

Hello Petrol heads, I have started this thread so that we all can share our car breakdown experiences in detail such as- what went wrong, difficulties you faced, how you came out with it etc.
So please go ahead and share you experiences.
Thanks in advance.

I am lucky here.Till today I have driven various cars but not even a single breakdown faced except some tyre punctures.

. so far no major break downs.

expect my cars headlight bulb fused on the trip to nathdwara.
Had spares so replaced immediately

Prads said:
Everyone who owns a car or bike in India gets a scratch or a dent sometime or the other,but some stories on how it happened can be so odd & ridiculous it can make an interesting topic or read & am sure many of you have such incidents which you can share!
Click to expand...
Hilarious experiences. It reminds me of a program that used to air on Discovery Channel featuring some funny videos (Unable to recall name at the moment).

ParC said:
I am lucky here.Till today I have driven various cars but not even a single breakdown faced except some tyre punctures.
Click to expand...
Same here. My car has never left me stranded (Touchwood). Yes, except for a few punctures but it was never in middle of the road. Although car is a machine but acts much like humans. Give her some time and care (Read regular maintenance) and she would return it back in form of a joyful ownership experience forever.

AppU said:
When I was a school boy,myself & my friend travelled in my ranger cycle to reach home. adjasent to my street one new Amby were parked. I was riding the cycle & he was sitting at rear. I asked him to touch the car if he can & I ride the cycle few meters away from the car.
Click to expand...
nice incident, last week my cousin made the same in a indica
the owner found our house and enquired but at that time my grandma said that its not done by our children

ParC said:
I am lucky here.Till today I have driven various cars but not even a single breakdown faced except some tyre punctures.
Click to expand...


Same here, Till today None of my Vehicles haulted in road.

AppU said:
Same here, Till today None of my Vehicles haulted in road.


I can say one thing, "If you take care of your vehicles, It will take care of you at any kind of situations".
Click to expand...
its real fact
that everyone has to remember

Re: Weird Damages or Accidents to your Car/Bike !!!( bird strikes car)

Few days ago as i was driving back to my place! I was frustrated over something & decided to floor the car,it was an empty stretch which i usually cruise at 80 but this time i was around 120 & a few birds scattered off the road in front of me,seeing its clear i went through at speed just when out of the bush flew another bird & a small sound & the road behind me sadly was covered with feathers

, i noticed it brushed my A Pillar,so was confused why did it appear that the bird had a heavy impact,i checked & there were no marks on the front pillar or windshield.On parking at my place i informed my mother on what had happened & after a while i was pointed to my shattered headlight(i20 has unique muscle or squid shaped headlights which can make it weak i assume). 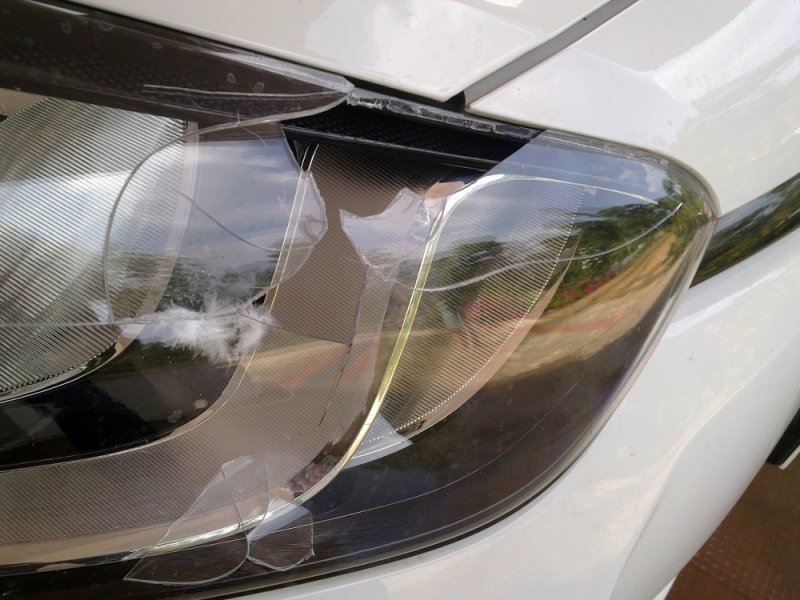 Turns out the poor bird never knew what was coming (neither did I) & bounced off my aerodynamic headlight & on to the A Pillar,this incident reminded of why glasses on aircraft's are bullet proof cos of bird strikes.
You must log in or register to reply here.