Where To Get Integrated Turn Indicator on ORVM For Corolla?

Okay guys this happened yesterday night at about 8 pm(its time not that 8 pm thing): 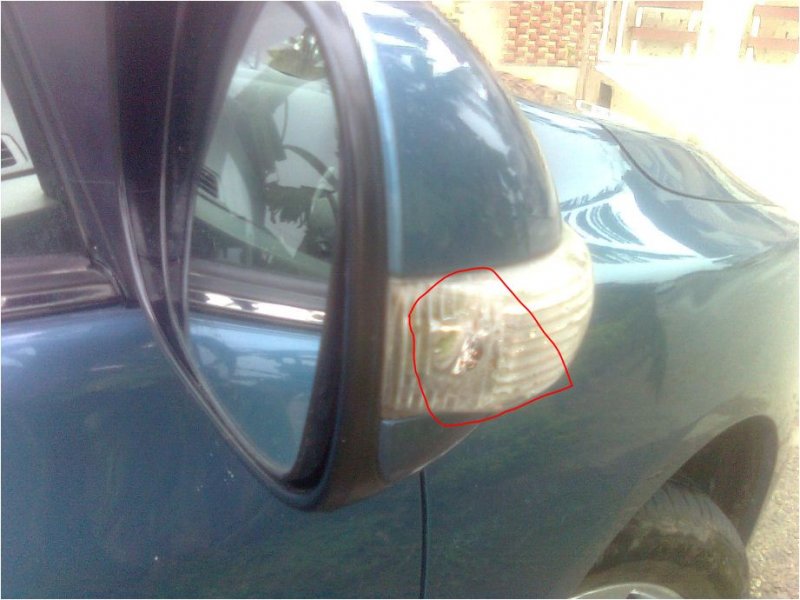 I was standing on a red light with a gap of about 2 feet between my car and divider and then I noticed that a Pulsarmaniac with a sweet girl on pillion was trying his best to squeeze his bike in that gap,but more disturbing was that the guy was more interested in laughing and talking to the girl than controlling the bike.
I dropped my window and asked him to stop-ignored.
I quickly pressed the ORVM folding button and shouted at the guy to stop the bike at the place-stopped.
As soon as the signal turned green,the guy accelerated in that narrow gap and his handle struck my folded ORVM(those metal weights on Pulsar's handles) and the guy accelerated ahead in no time.I touched the ORVM and felt that its broken,it has one hole in which my little finger can go.
accelerated the car like mads,caught the guy within a kilometer and after some argument the gay said "Sorry bhaiya" and I was like "Leave".
In the morning I saw it thoroughly,and found that this indicator is broken.So now my question is:-
Is it possible to replace the indicator only or the whole mirror will be replaced?Because if the whole mirror will be replaced then it will cost me around 16-17k(as per Toyota guys),but if indicator alone can be replaced than it can be far cheaper to replace.

i hope the outer cover or the indicator lens must be available separately.

Sorry to say, you wont get the indicator alone. If you wish, try some local spare shops, but I dont think its of any use. Toyota parts are not available freely and that too, such small parts.

Best option would be replacement. But considering cost and size of hole, you can go for a jugaad. Looking at the picture, I feel I have a solution. I would have sealed the hole using white mseal or araldite. Then I would have finished the surface to match with the body. But the scar would be visible. So i would have fixed a piece of retro reflective tape or any other tape to hide the scar. And similar tape can be fixed to other side rear view mirror as well. Even better would be to replace the broken glass only. But as raj said, its not possible.
Whats your opinion Vipul?

I have called the Toyota SA and he was like

when he heard that again my car can return to him.The guy gave me a very smart reply:-
Sir,no problem.Your insurance is zero dep and its still one month(16 August) left so just bring the car,you have got left RVM changed and right will also be changed.If its not completely broken then also we will manage to show considerable damage and change it under insurance.

on hearing this and decided to research further.
My second question is:

@Ilango:I am also now searching for the casing,maybe you can search it before me,so kindly try it out and tell me how to get it.

@Raj:Maybe its painful,but thanks for a direct and honest opinion.It never hurts instead builds up our confidence on the person.

@Nozzle:It rained in the night and some water droplets are inside,once they are evaporated then I may go on for some good quality reflective tape installed on both RVMs,your idea was really worth thinking,in fact worth going for.
M

agree with raj, try in local market first, i dont know from where you belong vipul but in delhi there is a market in kashmiri gate where you can find these kind of things.

Ideally, it is not wise to claim insurance on such a small damage. As it is, like you said, you have taken a considerable hit with the insurance claims, so your next year's premium will be quite high...

But from a difference perspective, even though the damage is small, the bill is quite high. Since you have already taken a hit worth 2 Lacs, how much will an additional 17k matter on the premium? Peanuts. So you can claim insurance.

Premium will be high!!How high it can be?
Will ask the friends to search in the Kashmiri gate market too as mentioned by Mohit(I am from Meerut),else will try to use the tape technique.If it also doesn't work then get it replaced on 17th August after paying the premium.Because this year(till August 2013) the car my be completing about 1 lac kms and then it will be sold off.

Not sure how high the premium can be???? How about changing the insurance company itself? In that case would the premium shoot up?

Hey Buddy why don't you try the car market often called "Chor Bazar" area in Merrut. I think you might get something there. Just give it a try, maybe you can get lucky. It's better than getting it done through Toyota or on your insurance.

Okay guys,so after a lot of thinking and all,yesterday evening I again handed over my car to Toyota A.S.S. guys.Now awaiting it..

As usual,the A.S.S. again didn't had the mirror so it will take one day to come and about 4-5 hours for installation.


And yes,guys if I change the insurance company,than also I'd have to pay a higher premium?

Buddy try E-BAY, I am sure you would be able to find just the indicator if you can source that component any local mechanic can fix it in no time, all the best

Buddy,now I have sent the car,now let the Toyota guys replace the WHOLE mirror with casing.
They said "Sir write in the claim document that mirror got broken after a truck driver reversed his truck in the traffic jam and the truck's back end just broke the mirror".

Maybe till now they may have broken the mirror completely!!

Hey Vipul, Sad to hear about the OVRM. Even i faced a similar situation when the cover of my car's RHS OVRM got stolen and have started a new thread "How To Source Spare Parts Which Are Not Officially Available?"

I feel normal mirrors are ok cheap and best . In India u cant survive without getting mirror smashed for long
You must log in or register to reply here.