The ranks of Android phones and vendors keep growing, and now they’re even mutating into different variants. HTC offers one version of the One smartphone while Google offers another version of the same phone with different software. Samsung offers so many different variations of the Galaxy S4 it’s difficult to keep them all straight. Google even offers its own in-house Android phones under the Nexus and Motorola brand names. And the arrival of the next iPhone in a month or two could blow this entire list out of the water. We’ve picked out the top five Android phones on the market for fall 2013, along with the major pros and cons of each.

HTC One and HTC One Google Play Edition. The HTC One is hands down the most impressive piece of Android phone hardware we’ve gotten our hands on. The only question here is whether you’re better off buying the HTC version, which includes its own in-house apps, or the Google Play version which is lacking those apps but is more forward compatible with future Android software updates. The catch: HTC is in a full scale meltdown financially, and no one is sure how much longer it’ll be in the game. And uncertainty about Android 4.x software update forward-compatibility on the HTC standard version is a concern.

Moto X Phone: It’s not quite the stuff of magic that the rumors had long touted, but it’s an above average piece of Android phone hardware with some cool unique features. And though most of the industry doesn’t know it, color choices to matter to consumers.

Nexus 4. It was king of the Android hill when it first launched, but at this point it’s too far over the hill to remain at the top of the list. When the Nexus 5 finally arrives, it may jump right back to number one. The catch: in light of the upcoming Moto X phone, what will the Nexus 5 do to differentiate itself?

Samsung Galaxy S4 Active. The flagship Galaxy S4 is made of cheap plastic and a fragile screen which performs poorly in drop tests. But the Galaxy S4 Active is a different beast, ruggedized to protect against not only drops but also against dust. The catch: it comes with the same quad core processor found in the U.S. version of the Galaxy S4 instead of the faster eight core processor found in the international version. And that whole waterproof claim? Not so much.

Battle of the flagships: Samsung Galaxy S IV vs. LG Optimus G Pro vs. HTC One vs. Sony Xperia Z 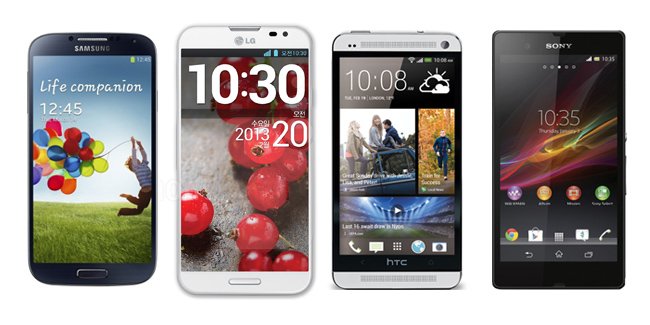 ​
As it turns out, each and every manufacturer has made sure that their device can compete head to head with the competitors. By packing the phones with top of the line hardware and making as many software tweaks, the OEMs have given us four solid products. Each handset has got its own unique advantages that makes it different from others. Which one you choose ultimately depends on your personal preference and needs, but we’ll be happy to own just any of these Android behemoths.

Battle of the flagships: Samsung Galaxy S IV vs. LG Optimus G Pro vs. HTC One vs. Sony Xperia Z

Next launches from Sony after Honami AKA i1

Xperia i1 mini (not official name)

As per a new rumor emerged today, HTC is working on a Windows Phone variant of its flagship device HTC One. HTC was the first OEM to announce a Windows Phone 8 device. Even though both their WP8 devices 8X and 8S are decent units, they didn’t sell well because of poor marketing and Nokia’s dominance in Windows Phone market. The rumored device will have the following specs,

4.7 inch 1080p Super LCD 3 screen
Beats audio
2GB of RAM
32GB of memory (unlike the 16GB used for the 8X)
Recently, HTC dismissed Digitimes’s report that HTC is leaving the Windows Phone market and said they are absolutely dedicated to their Windows Phone lineup.

Oppo confirms the N1 cameraphone with teaser images, will unveil it in September

South Korean consumer electronics giant Samsung Electronics has emerged as the No. 1 mobile handset company in India with a 31.5 per cent marketshare in terms of value in the year ended March 31, 2013, dethroning its Finnish rival Nokia (27.2 per cent).

This was revealed by the 18th annual survey of Voice & Data (V&D) on Tuesday. The study covered more than 30 mobile handset companies operating in India across categories such as feature phones, multimedia phones, enterprise phones and smartphones.

The V&D study also said home-grown Micromax has secured the No. 3 slot with a 8.72 per cent marketshare (value terms) in FY13, up from 6.3 per cent during the previous year.

The total revenue of the Indian mobile handset market stood at Rs 35,946 crore in 2012-13, compared with Rs 31,330 crore the year before, an increase of 14.7 per cent. “This was mainly due to the increasing uptake in smartphones by the Indian consumers,” V&D said.

Samsung’s rise in the Indian market is attributed to its rich product portfolio that was able to cater to customers of all budget categories, noted the report. During 2012-13, Samsung’s revenue from mobile handset business stood at Rs 11,328 crore, up 43.2 per cent compared with Rs 7,891 crore in the previous year. In a statement, Nokia said: “Nokia does not comment on country-specific market share data. That said, we are in a transition and are executing our strategy with urgency and at a new clock speed, even while operating in a fierce and fast-moving industry. We are happy with the progress we are making. In less than two years. We are competing at every price point with better mobile experiences and continue to see positive momentum in the market.” A Samsung spokesperson did not want to comment on this.

Nokia’s drop in market share started when the company failed to sense the need of a dual-SIM phone for the Indian consumer, and the same was tapped by the Indian players ahead of global players like Nokia, according to the survey.

Though Nokia’s Lumia series phones witnessed huge growth globally in the initial phases, the Indian performance has been somewhat lukewarm, it added.

“The rise of smaller local players like Micromax, Karbon, Lava, and Zen is a clear indication that consumers want cheaper feature rich phones. The next phase of mobile penetration in the bottom of the pyramid India will be driven by these companies”, Ibrahim Ahmad, group editor of V&D said.

Interestingly, Apple has witnessed 417.2 per cent growth in value in India with revenue going up to Rs 1,293 crore in FY13 from just Rs 250 crore in the previous year.

“In the last fiscal, the company made some disruptive changes in its sales strategy which paid off. Appointing Ingram Micro and Redington as the national distributors for their entire sales, and offering EMI schemes to the consumers to buy the most coveted Apple product changed the game for them. The company now enjoys 3.6 per cent market share in India with the smallest number of handset models in its portfolio,” noted the study 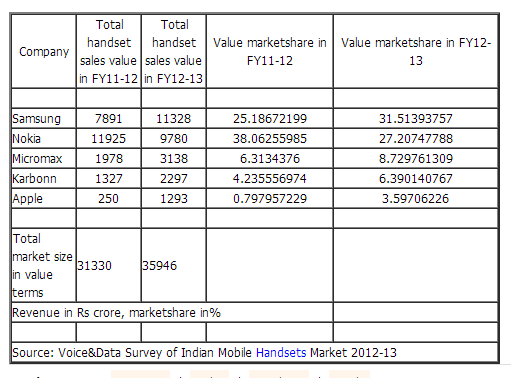 saw the super beast sony xperia ultra and my god it is huge device , insanely thin and amazingly beautiful .

Sony proves again how a high end device should be made . the attention to detail , the finishing the look the quality is just amazing .

its a perfect blend of art and tech .

got the HTC one dual sim this afternoon.

oh man, what a device :)
flipkarts delivery is awesome. paid on 19 and its in my hands on 21st.

nitin_k said:
got the HTC one dual sim this afternoon.

oh man, what a device :)
flipkarts delivery is awesome. paid on 19 and its in my hands on 21st.
Click to expand...
Congrats and pics pls.

the most beautiful phone you bought .
T

nitin_k said:
got the HTC one dual sim this afternoon.

oh man, what a device :)
flipkarts delivery is awesome. paid on 19 and its in my hands on 21st.
Click to expand...
now that i am in noida. party toh banti hai...

but on a serious note, i would like to check it out.

spoke to RK also, he is after me to get it to the meet today

you guys can feel it in your hands today and post the review :p:

build quality is excellent, no gaps , nothing that makes me say this phone is not WOW :) had issues in closing the back cover but HTC India has posted a tutorial about it.

2 slots for sim and one for sd card is all you get when you open the back cover. Sound quality is excellent and i read people saying the head phones along with it do not sound great. I felt they gave excellent output. Got to get used to putting the earplugs inside the ears thou.

pics at low light come damn clear. on the contrary they come better than my droid razr.

i changed the default pic saving to my 32gb class 4 sd card and the gay zoe kept asking me to use a better high quality card :laugh:

i will change the sd card from my XTZ which is class 10 to my HTC one :p:

India has become the "least favourable market", and it now makes business sense to exit and export from China, Finnish major Nokia has told the government. In a letter written this June, Nokia cautioned that the "political risk" of operating in India may impact future investment decisions.

Nokia urged the government to "act quickly to correct the wrong perception of India as a place for business". 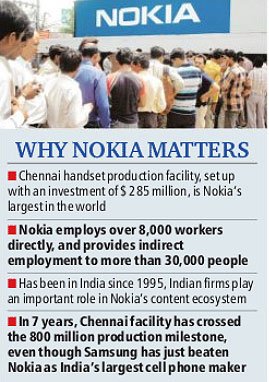 The telecom multinational's caveat came in the wake of fresh income tax disputes and delay in the refund of VAT. It is ominous in the current economic scenario in which foreign direct investment has become a trickle, institutional investors have been pulling out, and several investors have refused to take the plunge after wetting their toes.

In a 'non-paper' dated June 19, 2013, Nokia sent a harsh, terse message to the Ministry of Commerce & Industry: "India has suddenly become the least favourable market."

Technically, a non-paper is an unofficial document. It was received by the finance ministry last month.

It said that the non-refund of value-added tax by the Tamil Nadu government made it "more cost efficient for Nokia to have transferred the manufacture of mobile phones to China and to import them to Indian market rather than manufacture them in Chennai".

Under an MoU signed with Tamil Nadu, the state was to refund the four per cent VAT Nokia pays on phones sold in the domestic market from its plant in the SEZ. The issue reached a flashpoint after currency fluctuations and China-Vietnam competition started eroding thin margins, especially in the low-end models.

congrats nitin, finally you got hold on your handset, how much did you paid for it.
Share some images of your htc.

Oppo N1 pictures leaked, Update specs: 20.0 megapixel camera, Snapdragon 600 processor
key features: rear touch panel
Looking forward to seeing what they make, the Find 5 was a beautiful phone. The Oppo N1 features include a backside touch. This seems like a great idea for reading/web browsing. Not having to put your hand in the way of the screen to scroll or flip a page would be great. I’m surprised no other manufacturers thought of this. The Oppo N1 will be launch in September. Oppo makes so many great products. Very stylish and specs are always on par.