What is Your Internet Provider and Plan?

Currently I have the Excitel 50 Mbps unlimited plan for Rs.845 per month and it gives me a good performance.
Here's the Ookla speed test result:

Excitel is the best paying around Rs800 and it is unlimited 20mbps upload and download.

BSNL has increased speed of all its plans to minimum 10mbps. Any BSNL users here?

revvhard said:
Excitel is the best paying around Rs800 and it is unlimited 20mbps upload and download.
Click to expand...
It's trueee! Tried and tested so many internet providers around Delhi - it's either a veeery slow connection or FUP limits... aghh .. and the prices of Excitel are quite legit ;) => http://www.excitel.com/plans/

Since Jio started their Services, I have been using:

BooYaaKaa said:
BSNL has increased speed of all its plans to minimum 10mbps. Any BSNL users here?
Click to expand...
Not 10 mbps it is 4 mbps only 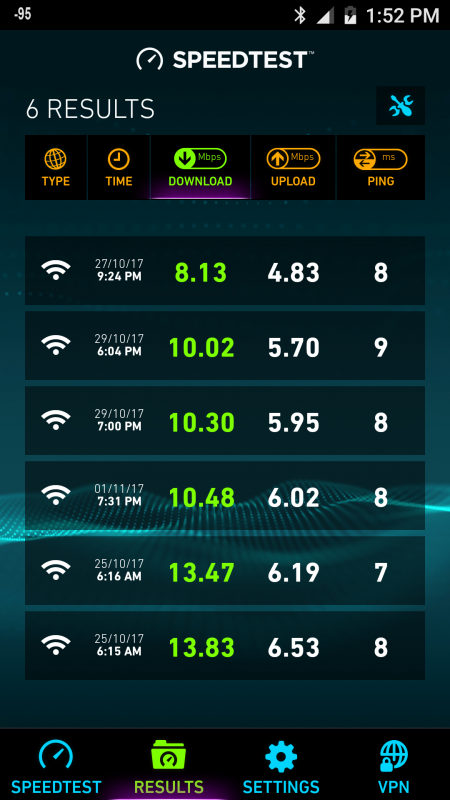 I expected around 20 Mbps speeds but got less than 40% of the 40 Mbps. 3 of the above 6 measurements were done before 6:30 AM. Perhaps, Airtel expects me to do the test at midnight 2 O’clock.

Two initial irritations:
(1) They have shortened my name on their own and have not corrected it yet. If they do not change it (as per my Aadhaar Card), they will have to locate "the guy with THAT name" and collect money from him.
(2) Initially, I was NOT able to call even Airtel Call Center number (080-4444 4121). Calls to BSNL land-line numbers (local / STD) were also NOT going. Airtel's Solution: From last Saturday, I have to dial "double zero with STD code" before dialing ANY land-line number. Now, from my home Airtel number, it is 0-080 for Bangalore, 0-011 for Delhi, 0-0120 for Ghaziabad, 0-044 for Chennai, etc. How would I call an international number now ?? Three zeros ??? Highly Idiotic...

BooYaaKaa said:
BSNL has increased speed of all its plans to minimum 10mbps. Any BSNL users here?
Click to expand...
I was ; had BSNL's "BBG Combo ULD 1199 Plan (2 Mbps / unlimited Data / unlimited Calls)", till 31-Oct-2017. Though Ookla confirmed around 2 Mbps speeds at BSNL server,the "REAL-TIME SPEED" at my Mobile Phone was normally around 500+ kbps (using Android App 'Internet speed'). I went to the exchange to complain and speed increased to 700+ to 800+ kbps; It took about 2 to 3 minutes to download a 10 MB mp3 song. Rarely I had seen 1.2 or 1.4 Mbps. The bill amount was around Rs 1,300/- and calls had the typical "BSNL's Ghrkkh ... Ghrkkh ... Ghrkkh sounds. Considering BSNL's "Low Speed and Poor Call quality", I shifted to Airtel.

I was a BSNL land-line customer from 1999 to till now (except for 1.5 years, due to call quality issues). Lot many people are employed with BSNL, and I was clinging onto BSNL, because my Salary is coming from Govt of India. Hummmmmmmmm. OK, the three SIMs at home are from BSNL. This is the best I can do to BSNL employees.

PS: Using the same Android App 'Internet speed', Airtel's REAL-TIME Speed at my Mobile end is almost equal to what Ookla says.
You must log in or register to reply here.