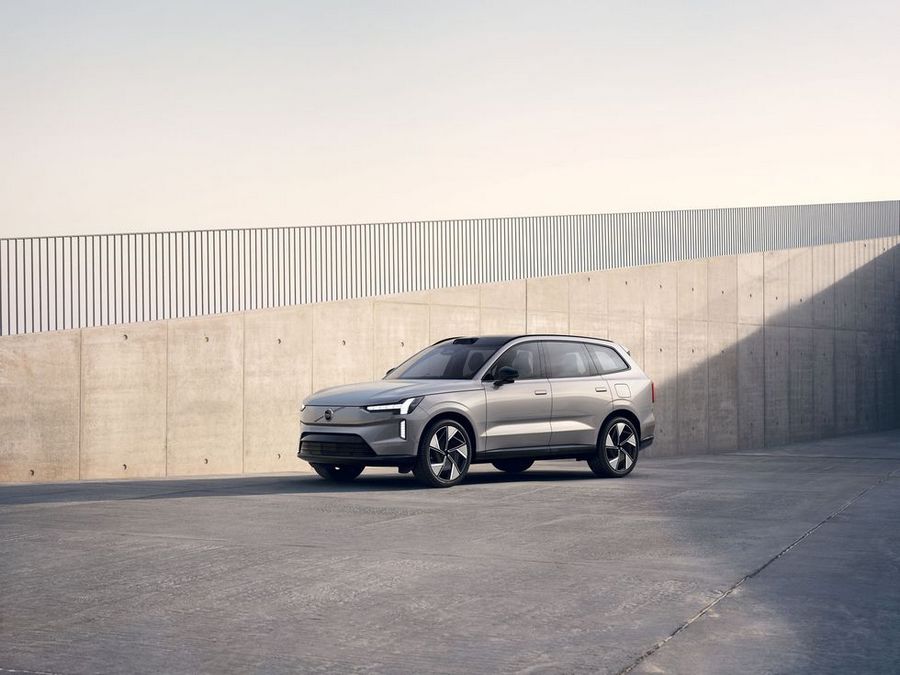 The car will launch with a dual-motor powertrain driving all four wheels. The two permanent-magnet motors produce a combined 402 horsepower and 568 pound-feet of torque in the standard version. The Twin Motor Performance model will have 496 horsepower and 671 pound-feet. Volvo estimates that the standard twin-motor EX90 will accelerate to 60 mph in 5.7 seconds, with the Performance version knocking a second off that time. The chassis features air springs, and the brakes measure 15.7/15.4 inches front/rear. The turning circle, at 38.7 feet, is about a foot tighter than that of today's XC90. 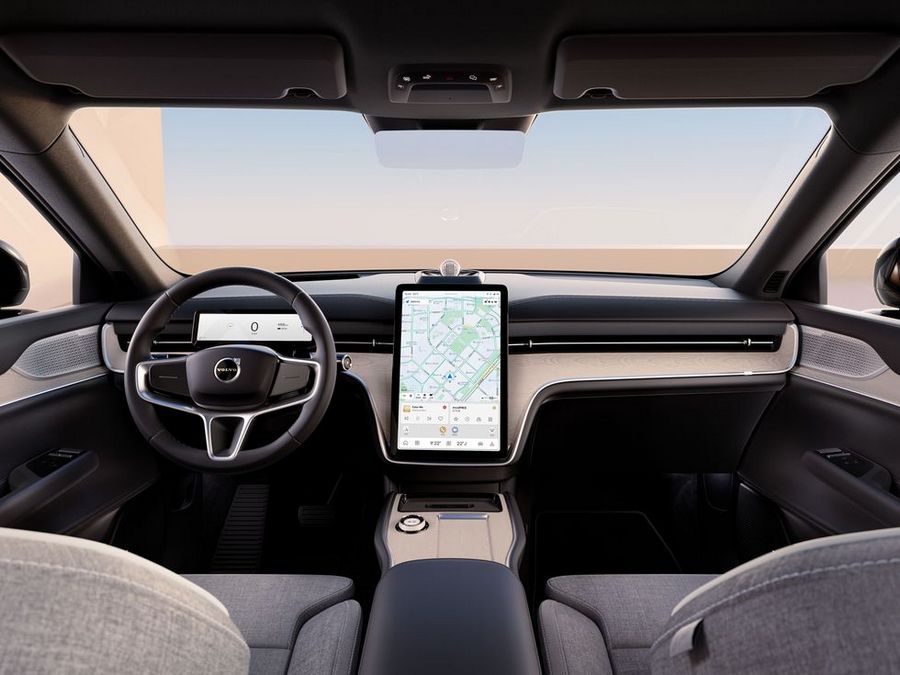 The EX90 uses a 400-volt architecture, and the battery will have a usable capacity of 107.0 kWh, with a targeted range of up to 300 miles. Using a 250.0-kWh connection, the EX90 will be able to charge from 10 to 80 percent in approximately 30 minutes. The car will also come with Plug and Charge for automated payment at charging stations. 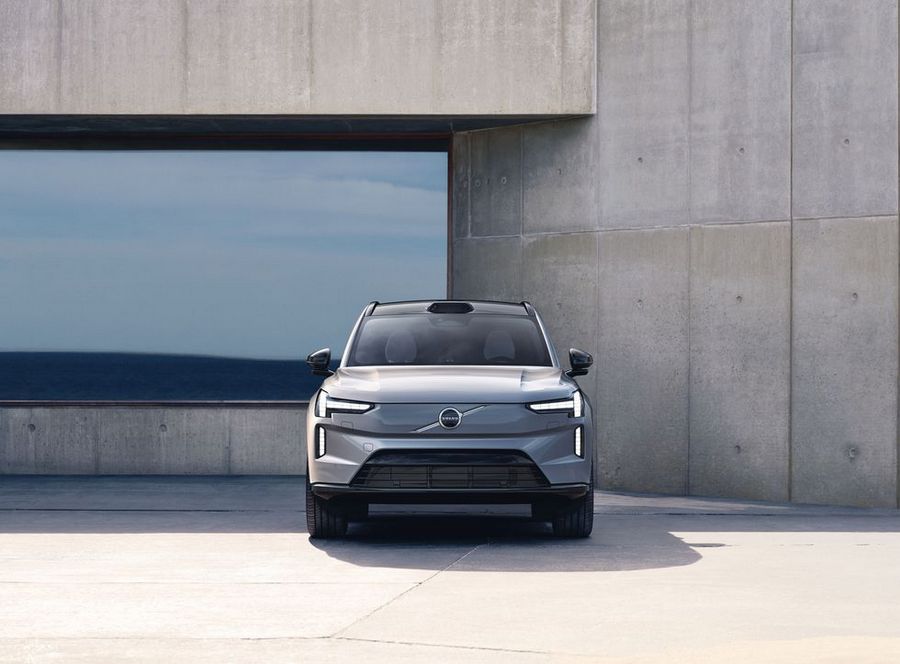 The EX90's EV architecture will allow for bi-directional charging capability, meaning that the car's battery could charge your house, either during a power outage or, possibly, even to sell battery-stored energy back to the grid during peak hours. Volvo will sell the necessary home hookup and energy management software, although which markets we see this capability in remains to be seen. When away from home, the EX90's battery can power accessories or lend some juice to another Volvo EV. 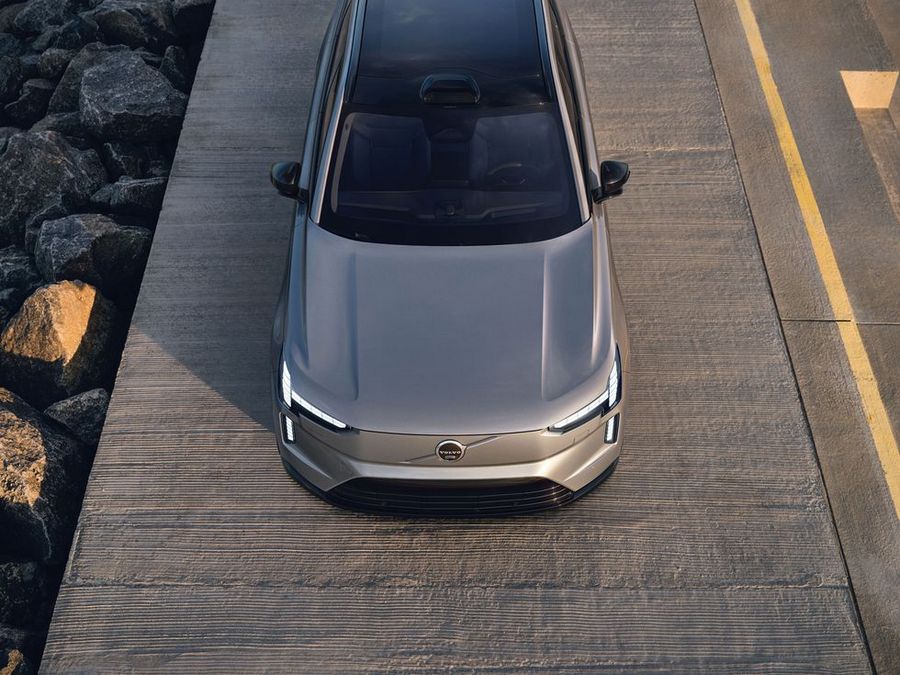 The EX90 also promises to be "safer than any Volvo car to come before it." That safety push takes several forms. Two cameras trained on the driver plus a steering-wheel sensor combine to determine the pilot's level of alertness. If the driver has become incapacitated, the system can stop the car at the roadside and turn on the hazard lights. 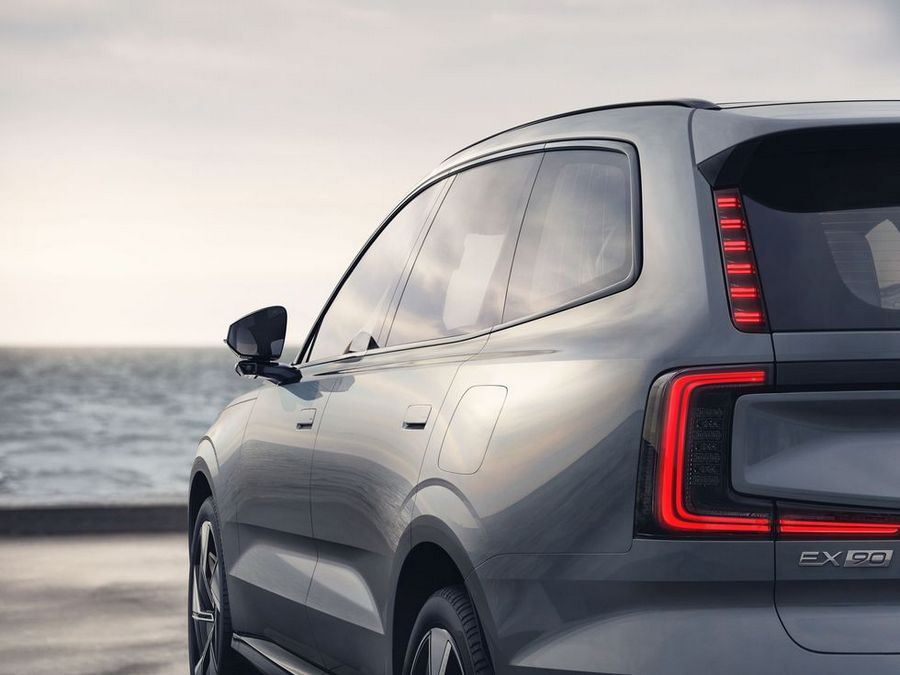 In-car radar is designed to detect a child or pet left in the vehicle. If the system detects a child or pet, it can display a reminder, prevent you from locking the doors, and run the climate control system to maintain a comfortable temperature. The car launches with Volvo's Pilot Assist system, which adds lane-change functionality to its current lane-centering capability. The EX90 also will come with the hardware for eventual "unsupervised driving." 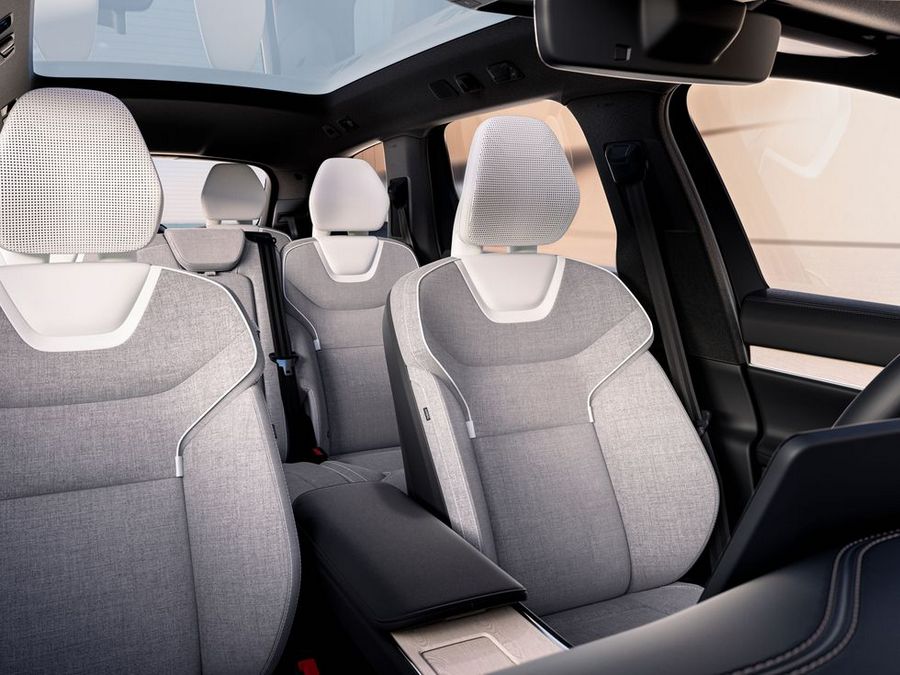 The EX90's exterior dimensions are close to those of the existing XC90. The wheelbase is the same at 117.5 inches, while the overall length grows by just over three inches, to 198.3. The EX90 is about an inch and a half wider at 77.3 inches, and about an inch lower at 68.8 inches. 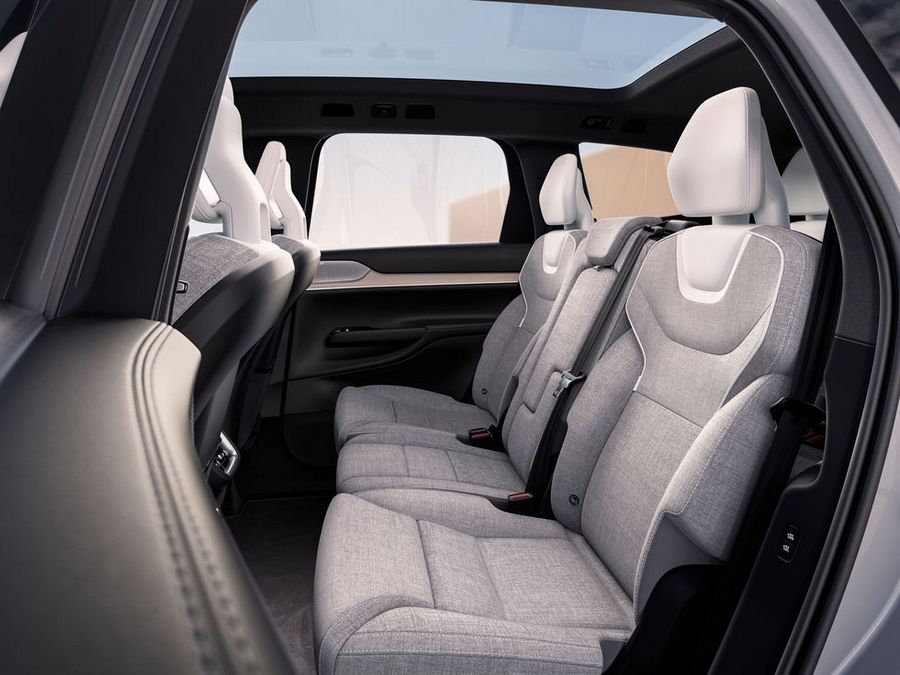 The EX90 debuts a new interior design for Volvo and is largely shared with the Polestar 3. The spare, minimalist dashboard has a large, vertically oriented center touchscreen for most functions. A smaller screen in front of the driver functions as a digital instrument cluster, displaying speed and range as well as a graphic of the car and surrounding traffic. 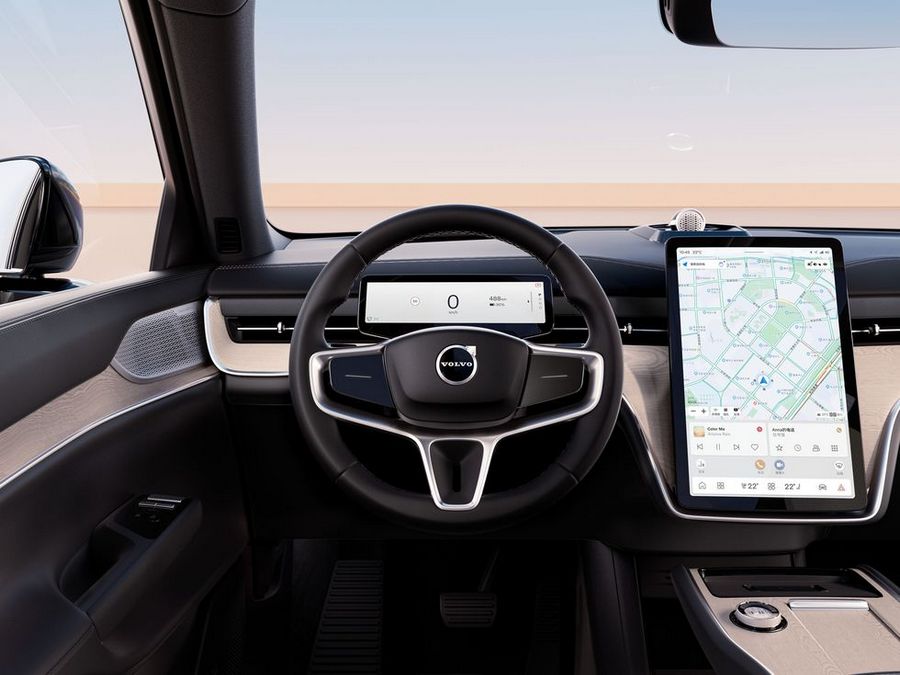 Knobs and nearly all physical buttons are banished. The exception is a large volume knob on the center console; gear selection is via a column stalk. Volvo attempts to make navigating the large, 14.5-inch central touchscreen easier by surfacing different functions on the home screen when the car is parked or driving, or whether there's an ongoing phone call or audio playing. A few basic climate controls are at the bottom of the screen, much like current Volvos; even the glovebox door opens via an on-screen button. As in today's Volvos, the infotainment system is Google based but also supports Apple CarPlay and Android Auto with a wireless connection. 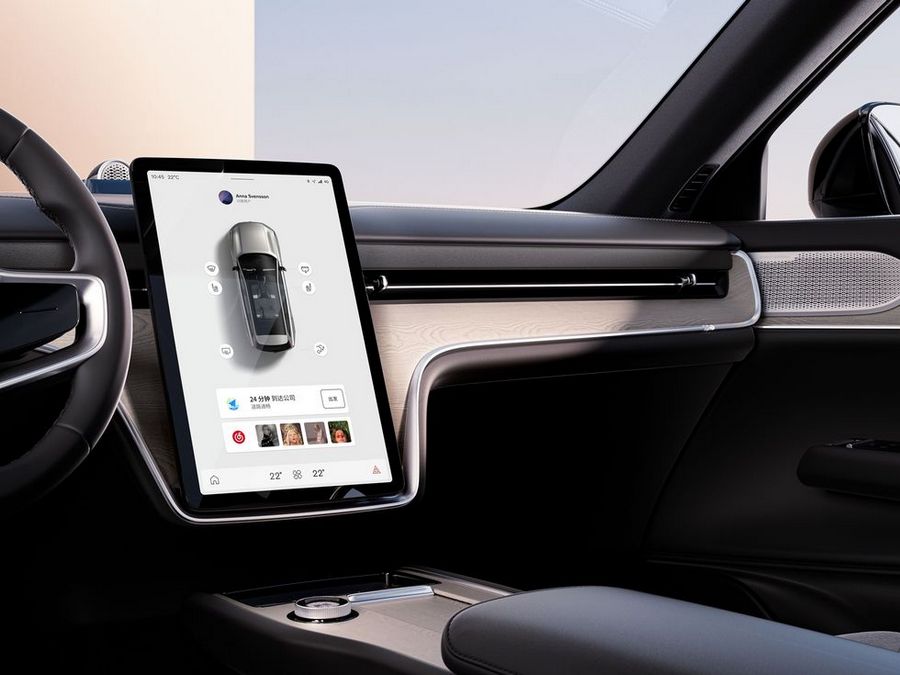 Like many EVs, the EX90 includes a panoramic glass roof—which may be swell in the gloom of a Scandinavian winter but will place an additional burden on the air conditioning in a Florida or Arizona summer.

The EX90 will come standard with smartphone-as-key functionality. The top audio system, by Bowers & Wilkins, will feature Dolby Atmos and blast music through 25 speakers, including in the headrests.

The EX90 will be built in Ridgeville, South Carolina, for the U.S. market—alongside the Polestar 3—and is expected to reach dealerships in early 2024.