German carmaker Volkswagen India is actively considering a compact sedan in India to avail the lower tax rate on sub-4 metre cars and emulate the success of the new Maruti Suzuki Swift Dzire.

Europe's largest carmaker plans to develop a sub-4 metre notchback or sedan on the 'Up!' platform and a 1.5 litre diesel engine codenamed 'EA 189', which is a derivative of the existing 1.6 litre engine, to benefit from the small cars excise duty of 12%, at least three people familiar with Volkswagen India's plans told ET.

Cars with length of four metres or more, or engine capacity of more than 1,500 cc attract 24% excise. Normal sedans do not qualify for this. But trimming it to size can be a great benefit in a highly price-competitive market like India as recently proved by the runaway success of the new Swift Dzire.

Other players such as Mahindra & Mahindra and Honda too reportedly plan to enter sub-4 meter notchback segment with compact Verito and Brio sedan, respectively. During April-August the super compact sedan segment grew by over 30% to 88,342 units, while the overall car market grew just 7.2%.


John Chacko, Volkswagen Group's chief representative for India, refused to give specific information but confirmed that the firm is actively considering compact sedan sub-4 meters. "After being in India for three years, we have to adapt to a certain extent as far as the regulations (read excise duty) are concerned.... Definitely we will have to work on engines, right up to the length of the car," he said.

Chacko said the 'Up' platform is still under study and it will take two to three years for the product to hit the market.

The sources quoted earlier said the group is developing a 1.5 litre diesel engine to be used across various models of Volkswagen and Skoda including Polo, Fabia, Vento and Rapid, instead using multiple 1.2 and 1.6 litre engines.

VW India, which is present in only one-third of the overall car market in the country, is currently developing a product portfolio strategy for future.

Chacko said it will enter segments such as small cars (hatchbacks and notchbacks), SUVs and MPVs in the long run. "As a group we are covering 30-35% of the overall market, but there is still 65% of the market, we have to capture. We have to think long term, say by 2018-2020, where do we want to be?There is no reason why we can't have a same position in India as we have in some of the bigger markets in the world," he said.

Hahahaha it looks like everybody is trying to follow Indigo CS !! but ending up with a hatch with small tail

To me only Indigo CS looks like a compact sedan !!

Gurrala74 said:
Hahahaha it looks like everybody is trying to follow Indigo CS !! but ending up with a hatch with small tail

To me only Indigo CS looks like a compact sedan !!
Click to expand...
And also it looks better than others. At least it does not looks similar to doberman dog.

They will have polo with tiny boot....it will be called 'Booto'.

For India there is a big one. Apart from the compact SUV's VW India will be bringing a very India specific product - a sub-4 metre Polo. Clearly the success of this niche segment which has been drawing a lot of attention was too much of temptation for Volkswagen.

No compromise on Quality, but localiztion is being focussed. VW already has all the right engines, so expect the 1.2-litre TSI and 1.5-litre TDI to make their way under the hood of this car.

Dr. Heinz-Jakob Neusser, Member of the Board of Management, VW Brand, says

The sub-4 metre car will be based on the Polo and according to him, it is quite good looking. So, we can safely say that VW India is ready with the product. However, he went on to say that increasing localisation content in the car will be the kkey to its sucess, as it will keep the price and the quality of the product in check, thus as we can speculate, making it affordable.
Click to expand...
Volkswagen India to Bring Polo-based Sub-4 Metre Car to India - News
V

It is official now, the under 4 m sedan from VW will debut in 2015, a India specific model. VW has already finalised the design and the car is in the final stages of testing.

The development of the new car, says Volkswagen, took just half the time usually spent on developing an all-new product. What’s more, this sedan, for now, will be sold exclusively in India. It will also use the newly developed 1.5l diesel motor featured in the new Polo and Vento
Click to expand...
Volkswagen’s New Compact Sedan To Debut In India Next Year - Overdrive
V

Volkswagen starts testing its compact sedan in India. The vehicle will be displayed at the Auto Expo 2016 and launched in Mid 2016.

Based on the Polo platform expect a seamless interaction of the boot than those normally seen in this segment. 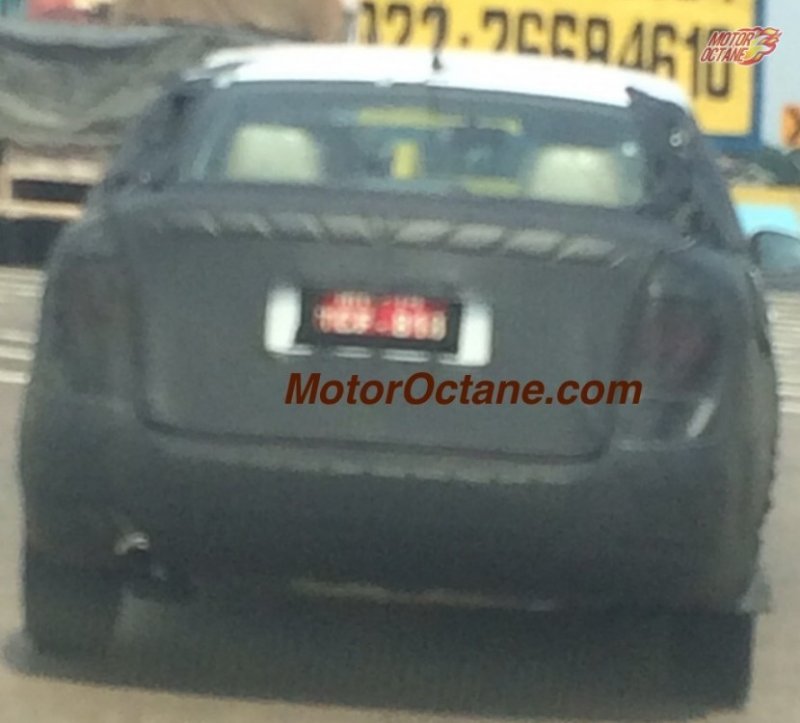 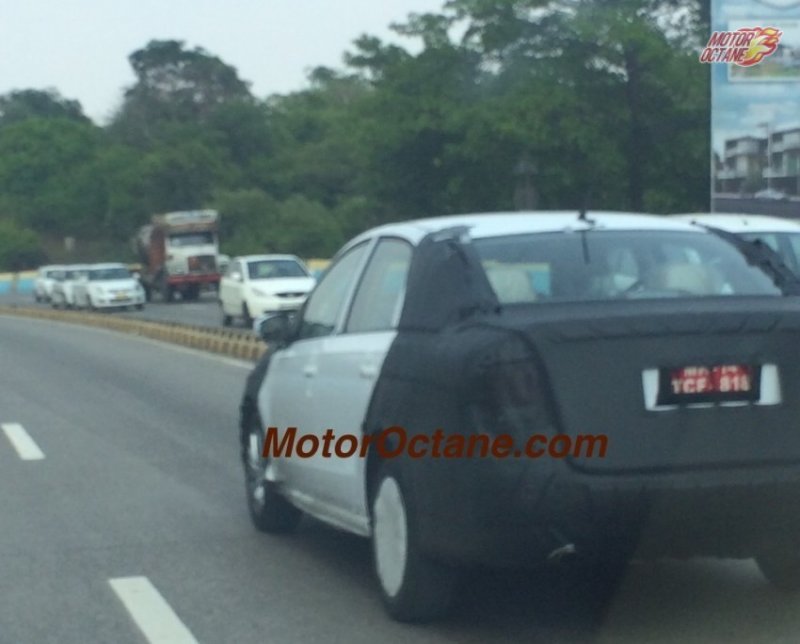 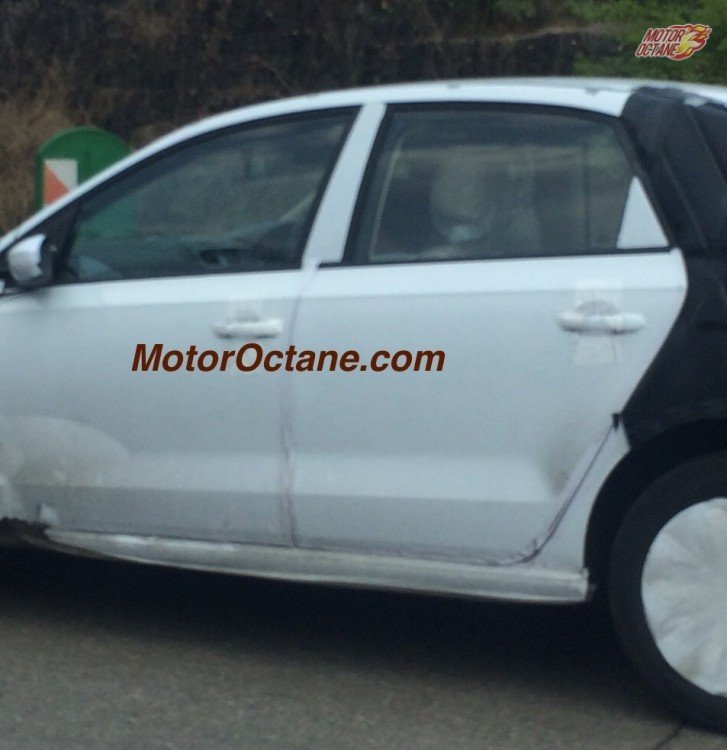 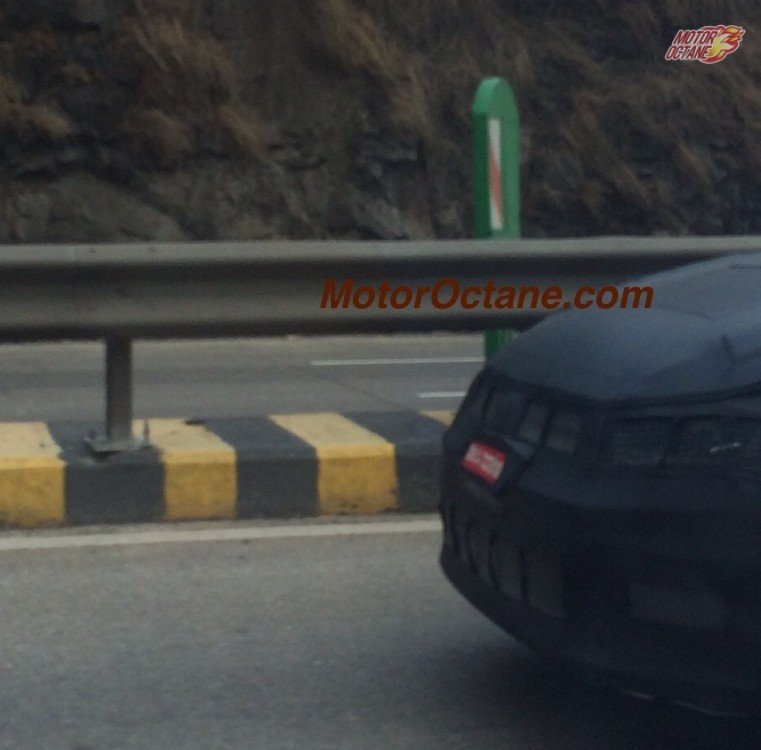 From the above pic, it seems the car has been damaged?
Or has vigorously been tested off the road!
Or has there been any compromise on the quality?? Especially cost cutting factor!
V

Sticking to the trend, VW is considering names of winds for the new sedan.

While the car is internally known as the ICS or Indian Compact Sedan, VW already has what it says is a provision name for the car — Bora. The advantage with this name is that, like the Vento it is a name that has been used internationally before. The other is that, like many VW cars, it is named after a wind. So Bora, a high speed wind that blows near the Aegean Sea can fit in well with Polo inspired by the Polar wind; Vento meaning wind in Italian; Jetta named after the jetstream; Golf after gulfstream, and finally Passat, a German trade wind
Click to expand...
Volkswagen compact sedan could be called Bora | Car News | Entry level saloons | Autocar India
V

Volkswagen will unveil its Indian Specific Compact Sedan at the Auto Expo 2016.

Welcome news indeed for prospective car buyers in India. But i firmly believe that the CS segment is saturated. Is there a space for a 6th CS? Except Dezire and Amaze to an extent all other brands are fighting hard for staying relevant and this new kid will face a tough road ahead. IMHO, they should try to bring a product to the SUV segment at the earliest to take on the likes of Ecosport, Duster, Creta.
I

The running board and front fender of the test mule looks damaged. Does it hint towards another low GC car from VW?

Any way, nice to see something more contemporary in the CS category. It does look like a Polo with a boot (which it is) or a smaller sized Vento, but I seriously wanted if VW could come with some different design. I mean, come on VW, Polo, Vento and Jetta look almost the same to me (50%) and now this Bora (what a name!

) also looks typical VW. We need variety and difference in designs of cars - see what Maruti has done. And as Godfather said, the competition is quite stern in CS category and Dzire and Amaze already rule the market. Plus Dzire now comes with optional safety features, making the V Option variant a complete kit for 80% of the buyers. So I doubt it would attract much needed eyeballs or not.

An MPV in the 15 Lac category (with all modern creature comforts, decent road behaviour, flexible seating) would have been an awesome rival to the Innova. Or am I asking too much?

The new Volkswagen compact sedan carries over the interiors from the Polo while the design remains the same but gets subtle revisions up front to differentiate the model from its siblings.

Volkswagen is readying up its new compact sedan likely to be called the ‘Ameo’ and the latest spy shots emerged on the interweb shed some new light on the car that will be making its debut at the 2016 Auto Expo. Providing a detailed glimpse of the model, it is no secret that the German auto giant used the outgoing Polo’s platform to underpin its all-new car while the overall design language has been carried over as well.

The front fascia carries the same features including the wide grille that could get revised chrome bars but retain the double barrel headlamps. The front bumper though is said to get a variety of changes to help distinguish the compact sedan better over its siblings. The rear door comes from the Polo but the C-pillar is distinctively revised and gets a new angle different from the hatchback and sedan. The test mule was spotted with multi-spoke alloy wheels introduced on the new Vento facelift from earlier this year.

Move to the rear and you will find a bulk of changes including the new chopped off boot and a flattened bumper to restrict the Volkswagen Ameo’s length to 4-metres. Previous spy shots have revealed that the tail lights will be coming from the Polo while the boot capacity will be marginally better than the hatchback. As expected, the interiors stay within the Polo family with most parts being carried over and the cabin gets finished in a dual-tone beige and black colour scheme.

In terms of powertrain, the Volkswagen compact sedan will use the 1.2-litre petrol and 1.5-litre diesel engine options under the hood, paired to a 5-speed manual and possibly the 7-speed DSG transmission as well. All said, more details on the model will only be revealed closer to the official launch slated at the expo while pricing will reportedly be very competitive on the Ameo. We will have to wait though for the biennial show to begin for the auto giant to spill the complete details. 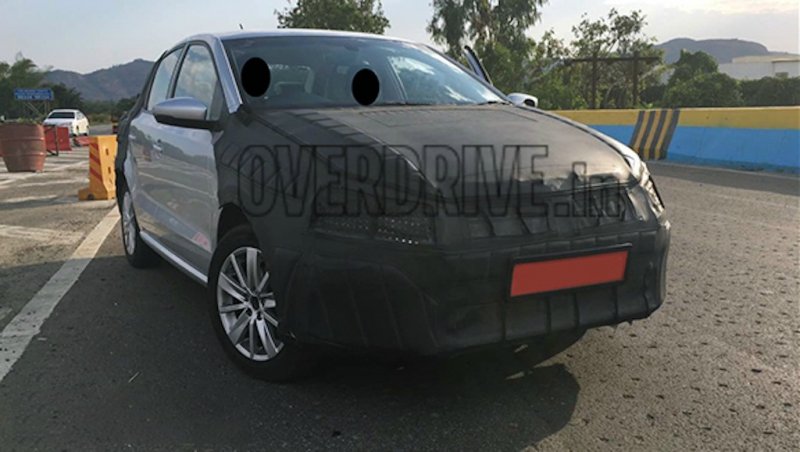 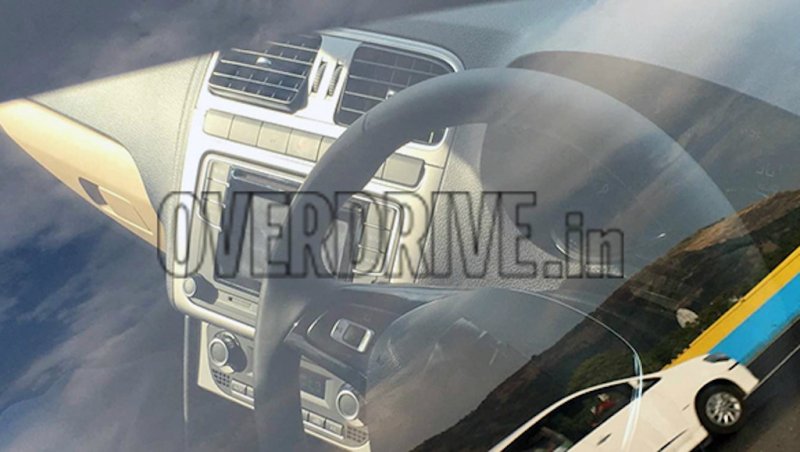 The interiors are carried over from the Polo on the compact sedan. 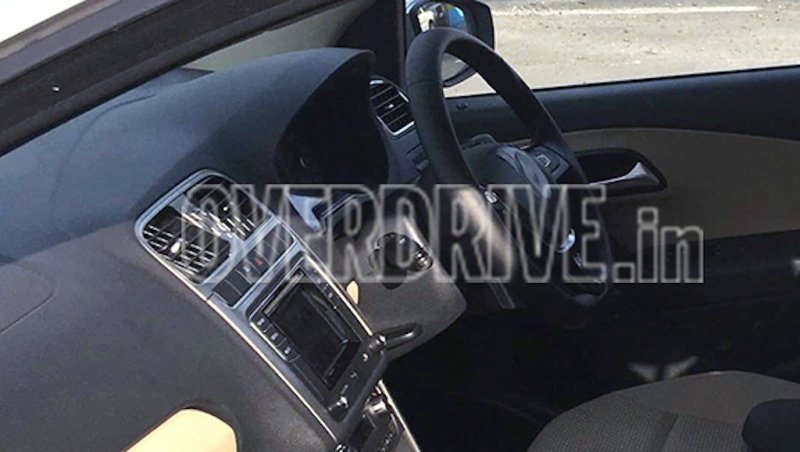 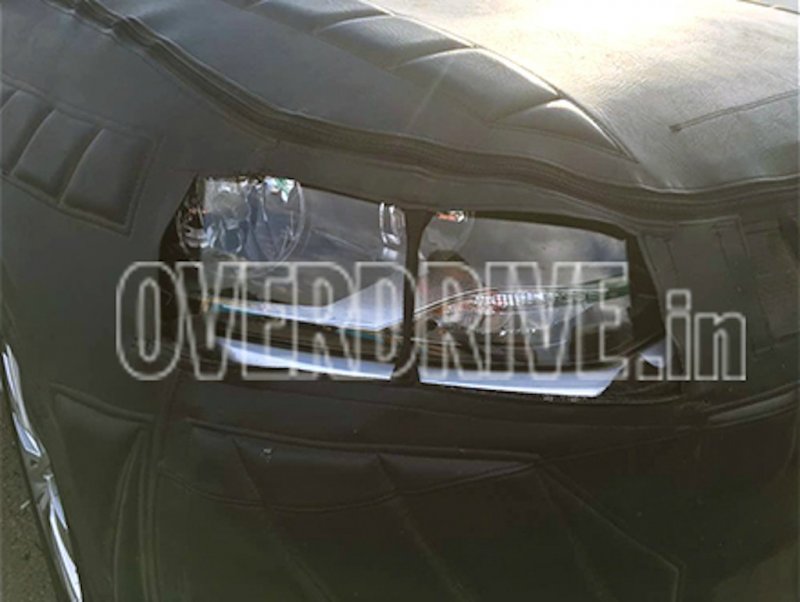 Double barrel headlamps make an appearance on the Ameo. 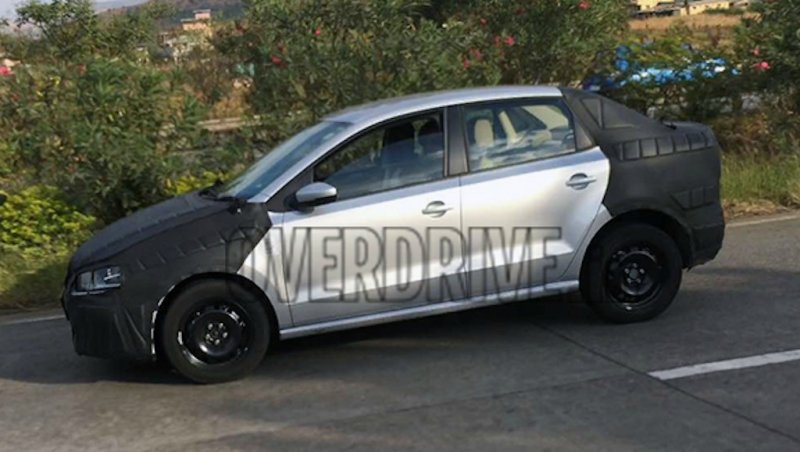 The compact sedan changes shape only after the C-pillar. 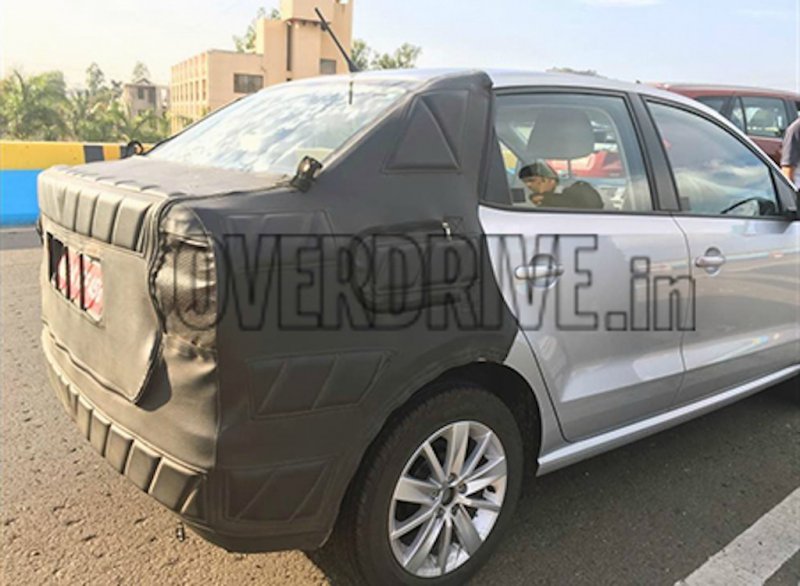 The alloy wheels come from the Vento facelift from earlier this year.

The car looks nice in the pictures. Yes the boot has been chopped off very badly (almost a straight line). VW should have made the bumper a bit more longer (i.e. sticking out) as I think bumpers and spare wherls are not taken into account while calculating the body length.

Pricing will decide everything. If it is priced right, Honda (Amaze) and Hyundai (Xcent) will be taking the biggest hit.
V

VW to release the name of its Compact Sedan Today.