Umang said:
hey buddy how do you know elantra will come?? where will they place it?
Click to expand...
Related link: http://www.theautomotiveindia.com/f...i-elantra-avante-slated-india.html#post113177

THE XOVER said:
Highly doubtful since tata haven't even started to test it outside their factory (since no test mules have been spotted by anyone yet),what may happen though that they may showcase the concept and launch manza cs around diwali next year.
Click to expand...
S Class said:
And Manza CS ? Some say, possibly but Tatas are not for it for now.
We can see Dzire CS for sure, which will have 100L more boot over new swift.
Click to expand...
Related Link: http://www.theautomotiveindia.com/f.../2733-tata-indigo-manza-compact-sedan-cs.html

Wish to see Audi Q3 in the above list...

TyreBurner said:
Wish to see Audi Q3 in the above list...

Click to expand...
Welcome to The Automotive India, TyreBurner. Yes, New Audi Q3 is expected for sure: http://www.theautomotiveindia.com/forums/indian-auto-news/4375-audi-about-launch-q3-2012-a-2.html

TyreBurner said:
Wish to see Audi Q3 in the above list...

Click to expand...
Welcome aboard TyreBurner. I would request to spend some time and introduce yourself in the Introductions thread. People would be keen to know more about you.

Have a pleasant stay at TAI and be in touch with us for any support.

Any info about Tata Dolphin anyone 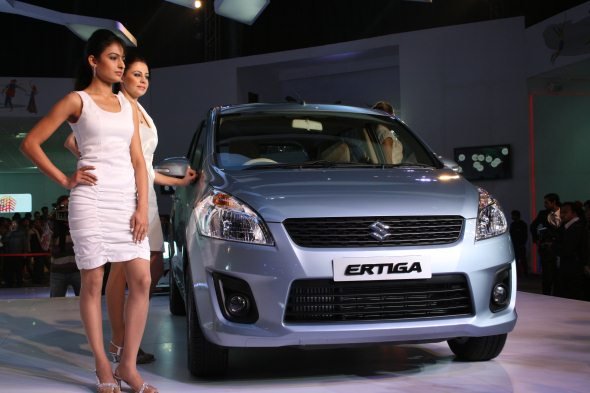 The Ertiga is expected to be launched on April 12th, 2012. The Ertiga is a 7-seater multi-purpose vehicle, which is quite car-like in styling. The front of the Maruti Suzuki MPV will have a striking resemblance to its smaller sibling the Ritz small car and a bland rear with wide rear windscreen. The interiors of the Ertiga resemble that of the new Swift. However, unlike the Swift which has black/grey interiors, the Ertiga gets beige interior including the dashboard and steering wheel

Mileage: The Ertiga has a claimed mileage of 16.02 kmpl for petrol version and 20.77 kmpl for diesel version. 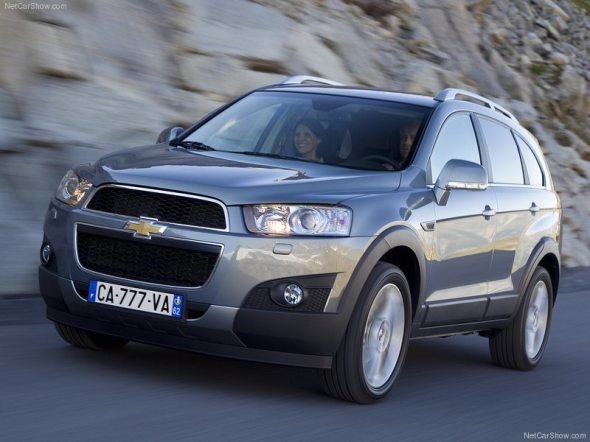 Looks: Chevrolet unveiled the 2012 Captiva at the Delhi Auto Expo. The Captiva has the bowtie signature grille. The overall design gives more aggressive stance to the new Captiva. The new Captiva has a dual cockpit and its design is similar to what was featured in the Beat and Cruze.

Performance: With regard to engine options, there are chances that the 2012 Chevrolet Captiva will get a spruced up, better performing 2.2 litre CRDI diesel motor that produces 184 bhp of maximum power which is up from the 2.0-litre 148 bhp motor that powers the current model. The performance of the 2012 Captiva will be significantly better than the outgoing model.

Mileage: Expect the 2012 Captiva to have a fuel economy of around 13 kmpl.

Variants and prices: The 2012 Captiva will likely be priced roughly Rs. 1 lakh above the present model which has a price range of 17.9 – 19.7 lakh. 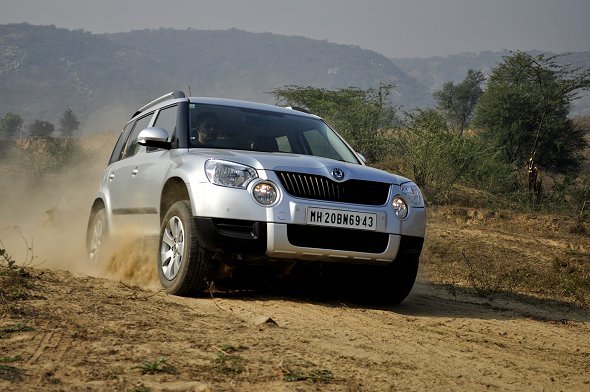 Looks: The upcoming Yeti petrol will likely have no external changes and will be identical to the present Yeti diesel.

Performance: Skoda Yeti petrol will likely be powered by 1.2 TSI petrol motor producing 104 bhp of power that can accelerate the SUV from 0 to 100 kmph in 11.8 seconds and can reach a top speed of 175 kmph. The engine will be mated to a 5-speed transmission.

Mileage: The mileage of the Yeti petrol is not yet known but is expected to be around 15 kmpl. 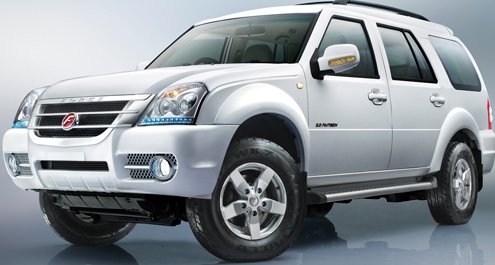 Looks: The Force One 4×4 will likely have 4×4 badges at the rear while the rest of the exteriors will be same as the regular model. The Force One looks large and imposing, although the design is a little dated.

Performance: The Force One 4×4 can be expected to offer better acceleration and performance than the 4×2 version. The Force One 4×4 will be powered by the same by 2.2 litre common rail diesel engine that puts out 139 bhp of power and 321 Nm of torque. The engine is mated to 5-speed manual transmission.

Mileage: The ARAI certified mileage for the Force One 4×4 could be 11 kmpl. The mileage is assumed to be slightly less than the 4×2 version (12 kmpl).

Safety features: The Force One 4×4 will have ABS along with other safety features such as remote key entry, driver Seatbelt warning, door open warning and display, rear windscreen wiper with washer, front demister, central locking and over speed warning.

Variants and prices: The Force One 4×4 will be offered in only one variant and is expected to be priced at Rs. 12.5 lakh.

Looks: Premier unveiled a face-lifted version of its compact SUV Rio at the Auto Expo 2012. The upgraded Rio gets an integrated grille and somewhat curvy headlamp on the front while the rear gets a spoiler—all combine to give the Rio, a sporty feel. On the inside, the Rio gets beige upholstery that makes the cabin look spacious.

Performance: The Rio will get a new Fiat Multijet diesel engine that powers Maruti Suzuki Swift and Fiat Punto. The new 1.3 liter engine makes about 74 bhp and 190 Nm of torque. The engine, which is BS-IV compliant, will help Rio target bigger metro markets. Expect the car to return a mileage of 14-15 kmpl.

Mileage: The fuel economy of the Rio diesel powered by Multijet engine is expected to be in the range of 14 – 16 kmpl.

Variants and prices: The Rio multijet diesel will likely be offered in two trim levels as the Rio petrol and could be priced at around Rs. 6 lakh.

Looks: The new Cruze will have a redesigned grille and refreshed fog lamps. The headlamps of the outgoing model make the Cruze looks aggressive and hence, the designers have not altered the overall shape of the headlamp on the facelift version. New alloy wheel pattern can also be seen in the upcoming Cruze facelift. Interiors-wise, expect improved headroom for rear passengers.

Performance: The upcoming Cruze will be powered by GM’s Z series, 2.0 litre, DOHC, common-rail diesel motor that produces 163 bhp (presently it is 148 bhp) of power. The new Cruze will have an edge of a wholesome 23 bhp over the Jetta that belts out 140 bhp of power and is one of its key competitors.

Mileage: The new Cruze may have a slightly lower mileage than the present model which has an ARAI-certified mileage of 17.30 kmpl for the manual variant and 14.39 kmpl for the automatic variant.

Looks: Toyota unveiled the new Camry at the Delhi Auto Expo in January 2012. The facelift Toyota Camry has design cues of the Toyota’s premium brand, the Lexus. The front grille has six horizontal chrome slats giving the car a bolder road presence. The sharp angles and sporty rear profile give the new Camry, a youthful appeal.

Performance: The new Camry is expected to be powered by a new 2.5-litre petrol (replacing the 2.4-litre petrol) engine. This motor will put out 167 bhp of power and will perform slightly better than its predecessor.

Mileage: Expect the upcoming Camry to have a mileage in the range of 8 – 13 kmpl.

Variants and prices: There are expectations that Toyota may assemble the car locally via CKD (Completely knocked down) route. Hence, the price of the Camry could go down by a couple of lakhs and may start at as low as Rs. 20 lakh. 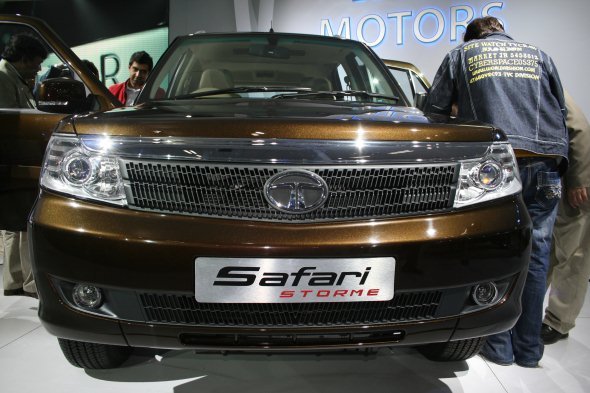 Looks: Tata unveiled the new Safari Storme at the Auto Expo 2012. The Storme is a restyled Safari but while the looks haven’t changed radically, the underpinnings borrowed from Aria are completely different. The exterior changes include redesigned front grille, Range Rover-inspired tailgate while the interior changes include improved quality of plastic, faux wood inserts and overall good fit and finish.

Performance: The Safari Storme will be powered by 2.2-litre Dicor diesel motor that puts out 140 bhp of power. This engine has dual mass flywheel as in the Aria. The Storme will have optional 4×4 all-wheel-drive and retains the present Borg-Warner part-time system as well.

Mileage: Expect the new Safari to have fuel economy slightly higher than that of the present Safari which has an ARAI-certified mileage of 13.93 kmpl.

Variants and price details: Expect the Safari Storme to be offered in five trim levels similar to the present model. The top-end VX variant will likely come loaded with all bells and whistles besides the 4×4 system for off road adventure. The Safari Storme could be priced slightly higher than the current model with a price range of Rs. 9.33 lakh to 14.51 lakh (on-road, Delhi).


Launch of "Most Awaited-Renault Duster" Skips from June 2012 to "Aug-Sep 2012" right now, But surely launch before "Diwali".

Thanks for this sankalp.
Now can you confirm that Storme is launching in June ? If yes, then the chap who gave me info about may mid-end booking is right.
And the pic of cruze is that of station wagon version. Here is the one which will be launched in India -

^^ When will the Chevrolet Sail be out? Should be sometime soon right amidst all the road testing that is being done.
You must log in or register to reply here.