Riding high on the runaway success of the Toyota Fortuner, Toyota Kirloskar Motors(TKM) wants to bask in the glory of its success by introducing the diesel variant of Prado by mid next year. This step of Toyota’s might be to keep the luxury SUV segment all for itself by strengthening its position in the category. Being greedy Eh?

The upgraded version of Prado diesel will be launched in Japan by this December and might make inroads to the Indian market six months later. TKM desperately wants this SUV to be marketed in India sensing a steady growth of popularity for SUVs in India and is on the verge of wooing the parent company to bring the vehicle here to India. Looks like India has truly arrived in the scene if being a SUV country.

And since Indians still have a soft corner towards diesel versions of any cars, Toyota surely will bank upon this sentiment and bring the diesel version of the Prado to India so that they can sell more units of the same, contrary to the petrol version which sells about 50-60 cars a year.

Prado diesel will certainly be dearer and will cost higher than the petrol variant which is available at Rs 45 lakh. But we assume that Toyota is sane enough to price the SUV right so that the sheen of the vehicle is not lost owing to the price tag that it would carry.

Toyota Fortuner, which in a month's span received 7,000 bookings, and sold over 1,000 cars in less than two months, has the ball rolling for TKM. Lets all hope the same happens with the launch of Toyota Prado diesel in India.

A welcome move. In fact, Toyota should launch diesel version of all its cars. A good diesel engine manufacturer should make use of their talent in a diesel crazy country.

Launching Prado is just a great move from Toyota!

Will surely beat the records of all the high end SUVs!

Prado is a pretty good off-roads.Launching a diesel one will attract more buyers.

According to sources, New Prado is launching tomorrow.

Toyota will launch the refreshed Land Cruiser Prado tomorrow in India. While we can’t confirm if Toyota will include the 3.0-liter D-4D diesel engine to the Prado, we certainly can’t rule out the possibility since the company has spoken about it before. The engine will be listed, but will it happen tomorrow?

We’re heading to the launch to find this out. We’ll also ask Toyota about their small car and plans they have for the Auto Expo. So come back tomorrow to learn about it.

The new Toyota Land Cruiser Prado was unveiled at Frankfurt in the second half of 2009.

A ground breaking feature on the Prado is the Multi-terrain Select, which automatically controls power and braking according to the off-road surface, while providing you live video feeds through the four cameras placed around the car.

The Prado is expected to be priced around 40-50 lakh rupees.
Click to expand...
Credits:Indianautosblog.com

But the price should be revisited, as the competetion is getting heated up.

Why are all these SUV'S coming with only A/T now! Any particular reason?

Unveiling the new Prado here, Hiroshi Nagakawa, Managing Director TKM told reporters that Prado has sold over 1.56 million units in over 170 countries so far and that customer response in India since its launch in 2004 has exceeded expectations. "We are looking at 10 per cent market share in SUV segment with the launch of the new diesel version".


"We looking at all major metro cities like Mumbai,Bangalore and Kochi and states of Karnataka, Punjab, and Andhra Pradesh for our sales", Singh said. "Bangalore is a big market for us and we are looking at a sale of 10-15 vehicles per annum."

Great!!
Finally, Prado is here and that too with a 3 Liter Diesel.
But pricing could have been competitive, Atleast near to the Monster Montero. Is there any more information available? Let me try to dig out some..

Even the Fortuner is 3litre with 160BHP power, right???
So why same engine in both, and this is just the refreshed version with new diesel engine but still Toyota nowhere commands a respect as of VW, BMW, Audi, LR or a Merc, so this in anyway not gonna help. Toureg or Freelander 2 or Q5 or X3 are anyday better options.

Prado is looking mighty muscular now especially towards the rear.
Obviously it will face a tough competition from Q7 and Q5 which are leading the segments(max sales in month of Nov).

current model was much better. and sky touching price will keep buyers away, infact more people will go for branded LandRovers etc as bluesapphire said.

One more picture of Prado - 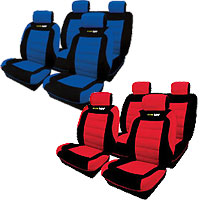 monstrous looks but ugly as i said. didn't earlier looked better and fresh?