what did that cabbie mean actually?

Marun said:
I heard some joke related to CWG some time back.

A 100m race was about to happen. There was a board placed aside of the track holding a message ' RUN SLOW, MEN AT WORK'.

Click to expand...
Nice one. I’ve seen a cartoon in some newspaper exactly based upon the same.

sriharsha said:
what did that cabbie mean actually?
Click to expand...
He said "Gadina Allayis Beda" (DOn't make the car dance about) The way he spoke in singular infuriated me. He wasn't wearing his seatbelt either, so I knew such a person can't judge a spirited and safe driver. These cabbies are responsible for traffic jams, and this is what he tries to do. Just today morining, a call centre Sumo hit a bus sideways and the road was blocked. Both the vehicles were in a position to be moved away.

@ Gears Ha ha nice one , an SMS joke though!


@ Marun Good one , am hearing this for first time!

350Z said:
Nice one. I’ve seen a cartoon in some newspaper exactly based upon the same.

Drive Safe,
350Z
Click to expand...
Here’s one which I was talking about, and another one too! 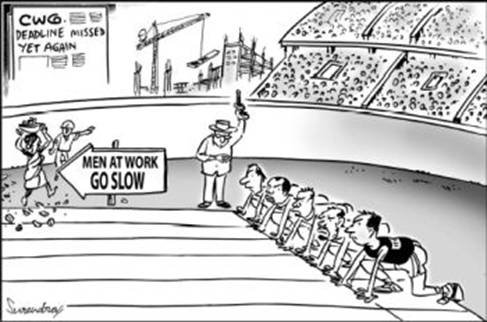 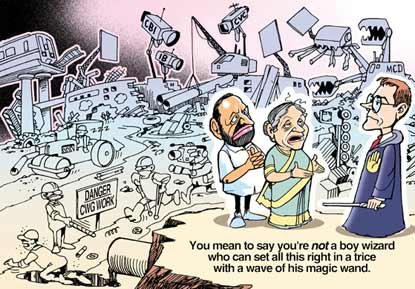 hahahahahaha there A LOT of CWG jokes running around. here are which i recieved in email:


'A collapse a day keeps the athletes away,' a parody of an old saying finds its way on the social networking website Facebook. The message was posted earlier this week after a foot overbridge outside the maverick Jawaharlal Nehru stadium went down with the last hopes of the diehard optimists.

'Ba ba Kalmadi, have you any shame. No sir, No sir, we are having a Common Loot Game. Crores for my partner, crores for the dame, crores for me too, for spoiling India's name!'

'Suresh Kalmadi must be the first choice if ISRO goes for trial and error experiments for manned space mission,'

'Suresh Kalmadi walked into a bar. The bartender was still spraying pesticides over the barley plants. It was the best bar ever,' went a subtle one.

'Compromise proposal for Ayodhya: Let the Hindus construct a temple, but the project must be led by Kalmadi.'

'Bhagwan Ram patched up with Allah so that the focus remains on KALMADI,' went another clever one after the verdict was deferred.

'Rain rain go away, Kalmadi wants to come out and play. Lyrics by M.S. Gill, Sung by Mani Shankar Aiyar, Music by A.R. Rahman!' goes an SMS doing the rounds.

'AMAZING BUT TRUE: If you re-arrange the letters 'Sir U made lakhs' you get 'SURESH KALMADI'!!!

But Kalmadi is not the only one dominating the cyberspace. He has CWG Organising Committee Secretary General Lalit Bhanot as competition. Thanks to his 'They (foreigners) have different standards of hygiene from us (Indian)' comment, the tweeting population is gloriously doubting his hygiene standards.
'Dude, looking at Lalit Bhanot I really wonder when was the last time he had a bath,' posts a Facebook user.

'Sarah Palin knows more about world politics than Lalit Bhanot about hygiene,' goes another one.

Even Sports Minister M.S. Gill is not spared. 'Gill calling himself a sports lover is like Shiney Ahuja declaring himself to be a feminist,'
Last edited: Oct 21, 2010
G

Click to expand...
Hehe. Good one. I recieved the same joke as SMS today morning.

Can somebody translate it? I am not very good at Hindi!

cooldhaya said:
Can somebody translate it? I am not very good at Hindi!

If you have heard the song you will get the humour in the joke.
T

cooldhaya said:
Can somebody translate it? I am not very good at Hindi!

From now on, I will make sure to post them in common language ENGLISH!
Sorry Dhaya!

No problem Gears i din mean any offence. I can understand Hindi a bit but this was way above my capability!

And moreover as Akash mentioned i couldn understand the joke because i don know the song also!

The picture says it all !

Hope the first one is not offensive, If it is Mods please feel free to delete it and sorry. And check out the helmets.