Win Win yet another Win in TATAs Bin

Tata Motors will virtually unveil the Punch on the 04th of October 2021.


If you ssssmmmmmmeeeeeelllllllllllllll...what the Reporter Saab is cookin! 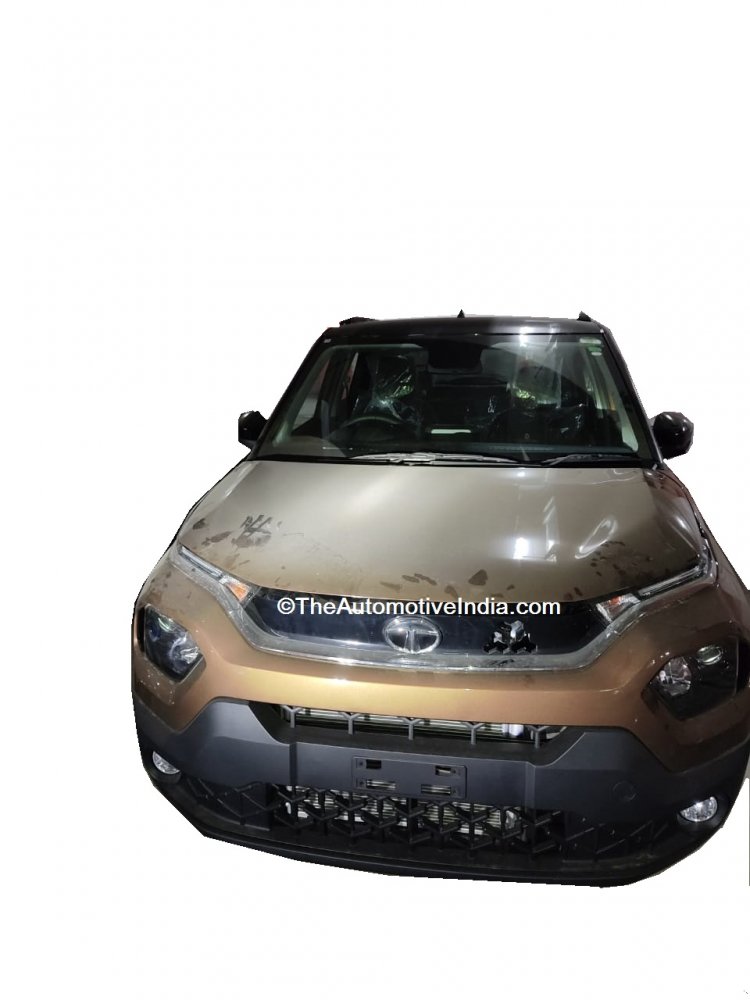 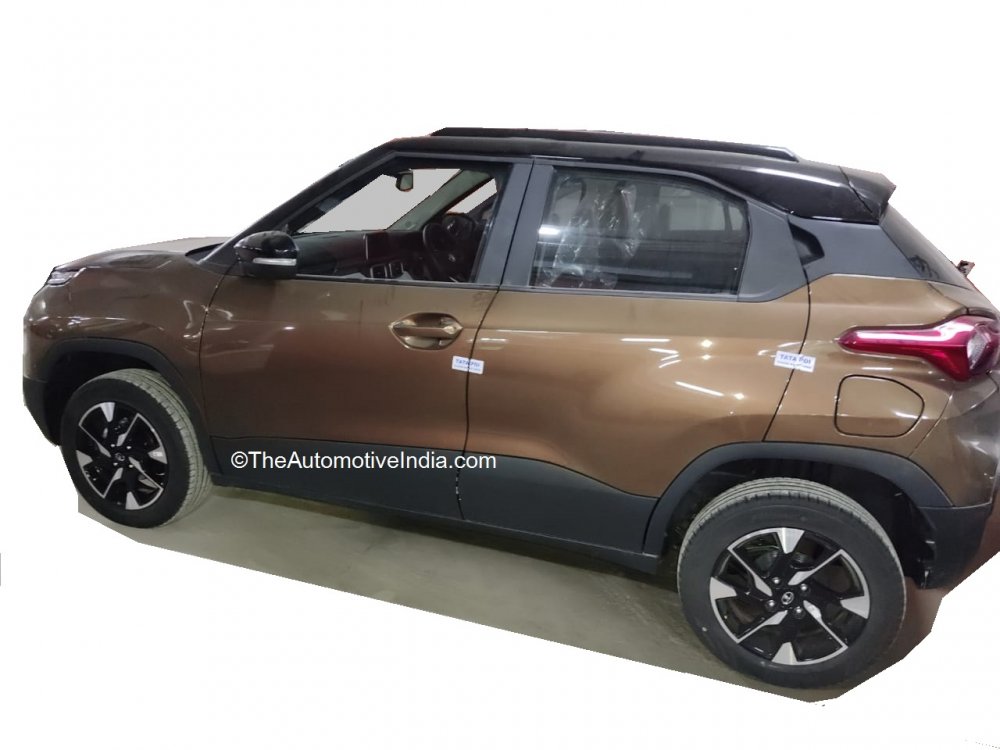 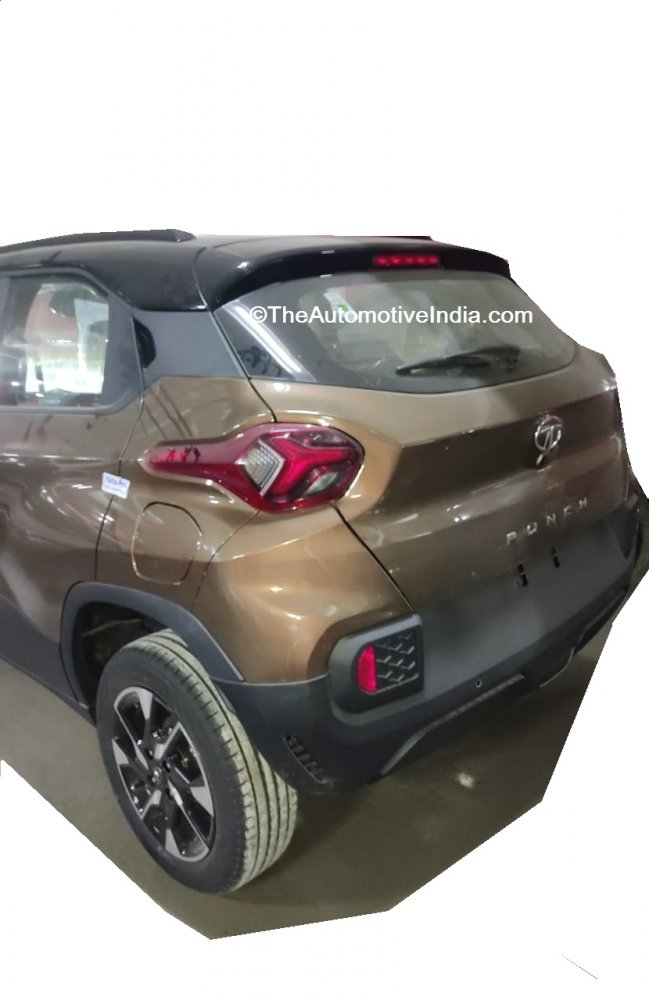 Awaiting more details, this looks to be great!
Does anyone have a good dealer n Delhi for offline pre-booking (may be bank transfer or something), avoiding to visit stores still on my end.

Akash1886 said:
If you ssssmmmmmmeeeeeelllllllllllllll...what the Reporter Saab is cookin!
Click to expand...
Thanks, Akash, for sharing the close-up shots. It looks far better and more proportionate than Mahindra KUV100. The name did sound awkward at first though. But then if “Kicks” can work, why not Punch.

The Tata Punch is one of the highly anticipated launches for 2021, and it be will be unveiled on October 4, 2021. Ahead of its launch, select Tata Motors dealers across Mumbai, Delhi and Chennai have already started accepting unofficial pre-bookings for the upcoming micro SUV, for a token ranging between ₹ 5,000 to ₹ 11,000. Some of the dealers we spoke to have also told us the mini SUV will go on sale in the coming weeks, and pricing would start somewhere around ₹ 5.5 lakh (ex-showroom). 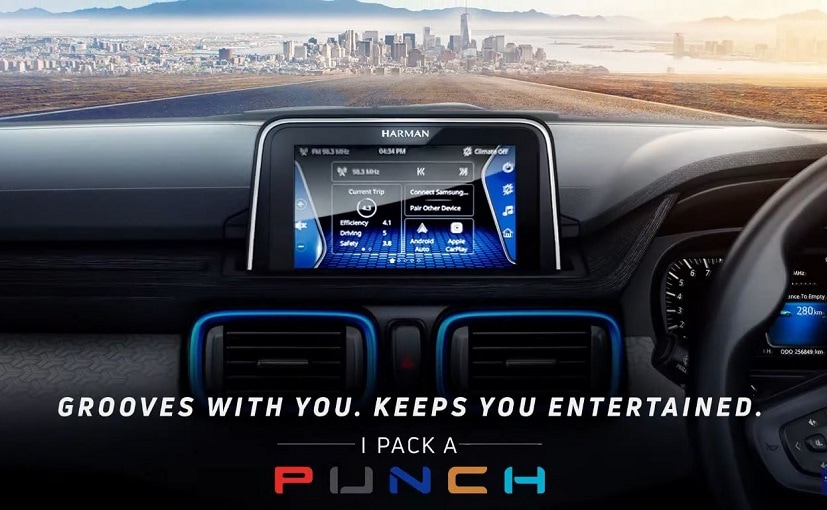 The new Tata Punch mini-SUV is all set to make its debut on October 4, 2021. While Tata Motors is yet to commence bookings for the micro SUV, select dealers across Mumbai, Chennai, and Delhi are accepting pre-orders for a token of up to ₹ 11,000. The home-grown automaker has been teasing the mini-SUV on its social media for quite some time now. The company has dropped a new teaser showcasing the Harman touchscreen infotainment unit on the soon-to-be-launched car.

it its based on alpha arc as altroz, then the cars will have similar charachteristics. like 90 deg door openening and safety as well. So highlyexpect the car to be crash tests for 5 star safety rating. What i would be more interested is in
1. what transmission is provided
2. what power it has and peppy drive
3. what is the pricing.
4. Driving manners

From the initial look of it it seem to be nexon killer but will also impact the swift, i20, May even go behind the Brezzas, Venues and Sonnets of the worlds, and will punch its way up.

vikyjoshi said:
From the initial look of it it seem to be nexon killer but will also impact the swift, i20, May even go behind the Brezzas, Venues and Sonnets of the worlds, and will punch its way up.
Click to expand...
I would tiago/tigor and altroz too to that list. Too many segments it is taking on :)
T

vikyjoshi said:
From the initial look of it it seem to be nexon killer but will also impact the swift, i20, May even go behind the Brezzas, Venues and Sonnets of the worlds, and will punch its way up.
Click to expand...
It in anyway cannot target the Nexon. Coz Nexon has more features that the PUNCH. What NEXON has that lack in the PUNCH are
Turbo Petrol Engine (Even if Punch gets, it will be 108 BHP)
Diesel engine
Rear AC vents
Cooled Glove box
3 drive modes
High ground clearance
Sunroof
Smaller details like Shark Fin antenna, RFID lock, Front and Rear skid plates, bigger boot, etc.

It may have some bigger features like wider rear seat, 90 degrees wide opening doors, 5.5' TFT driver display over the Nexon but they will be to improve the desirability quotient.

As Pratap Bose once said, Punch is the smallest SUV we can build meeting all safety regulations. Meaning, this is as micro as a micro SUV can get. Now this, is already as big as Nexon. Its not as long and wheelbase may be less, but its wider by atleast 10mm.

Also worth noting is that Nexon despite its 5 star rating and all, is nearing its end of life. Also remember its the X1 platform which debuted on Indica Vista. The next gen Nexon is almost upon us, in automotive time scale. And that will grow in size, making it sufficiently bigger than the Punch. And will go head on into Creta territory. The top end diesel Nexon sells for about 16 lakhs in karnataka. Yet, it sells about 10000 units per month. And the more expensive and bigger Creta, 12000. And we know now, as per rumors, Casper is not coming to India. Is the Creta next, after the I20?

Punch can easily do 6000-10000 per month. Irrespective of price, name and the engines. It will draw more people to the showrooms, selling more TATAs.

BTW, these are all my speculations. BUT the next Gen Nexon will be interesting to watch. That will be a clean sheet work for the new design chief. Meaning it could be more European. I hope though, the project be called Phoenix. From where they were , TATA, a few years back, this is truly a phoenix.

Tata Punch unveil is scheduled for 4th October at 11:00 AM. Sharing the link to live webcast. 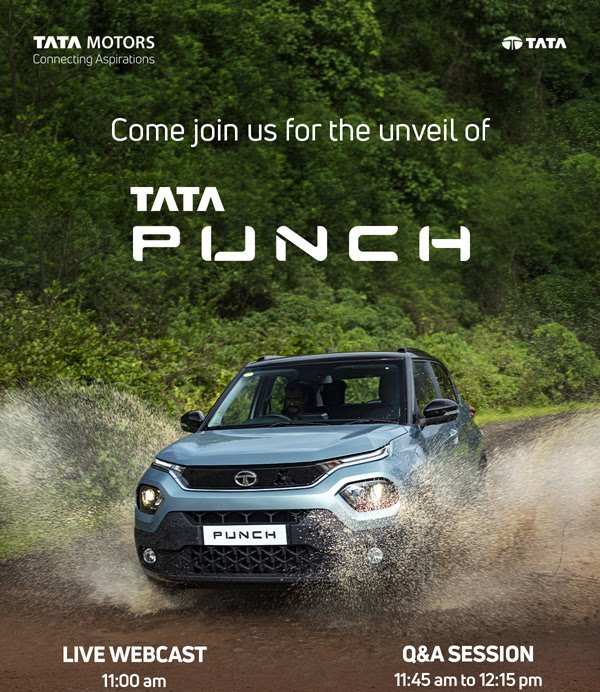 
Tata today finally fully revealed the Punch micro-SUV in India. The carmaker has also opened bookings for the Punch starting today, while the price announcement is expected by October 9. Deliveries for the Tata Punch will commence sometime around mid-October.


Tata Punch: engine and gearbox details
The Tata Punch is powered by a 1.2-litre, three-cylinder naturally aspirated petrol engine that produces 86hp and 113Nm of torque. It will come mated to either a 5-speed manual or an AMT automatic gearbox.

While this engine already does duty on the Tiago, Tigor and Altroz, in the Punch, it additionally features automatic engine start/stop functionality to aid fuel efficiency. The AMT gearbox on the Punch also features traction models like some bigger Tata SUVs. Tata motors says the Punch will do 0-60kph in 6.5 and 0-100kph in 16.5 seconds.

Tata Punch: how big is it?
Dimensionally, the Punch measures 3,840mm in length, 1,800mm in width, 1,635mm in height, and has a wheelbase of 2,450mm. It has a ground clearance of 187mm and a boot capacity of 366 litres. The Punch rides on a stylish set of 16-inch dual-tone alloy wheels. The Punch is based on the ALFA architecture, same as the Altroz, and gets 90-degree opening doors and a flat floor on the inside.

Compared to its rivals Maruti Suzuki Ignis and Mahindra KUV100 – the Punch is the longest and widest and also has the longest wheelbase and highest ground clearance. Given its tall nose, upright stance and heavy body cladding all around, the Punch also looks the most SUV-ish among its rivals.

The Punch also has class-leading break over, approach and departure angles and water wading capability.

Tata Punch: expected price and rivals
While the price for the Punch is expected to be announced by October 9, we can expect it to range between Rs 5.50 lakh and Rs 8 lakh.

The Punch will be a new entry point to Tata’s SUV range. Apart from rivalling high-riding hatchbacks like the Ignis and KUV100, the Punch will also rival the Nissan Magnite and Renault Kiger compact SUVs due to its extremely competitive price positioning.
You must log in or register to reply here.