wot!!! badges being struck @ dealerships??? i have seen anything of that sort. as per my knowledge they are struck in the factory.

Well while taking delivery of my Aria i saw many Aria's without badges standing at the stockyard!
A

Indian Autos Blog suggests Aria 4X2 Pleasure could be launched this weekend or the next week.

any details of pricing from tata, how much reduction is expected and on road price, what would it be, guessing nearby innova V top end.
A

cooldhaya said:
This may also be the regular 4X4 model too because the badges get stuck in Aria only by the dealers before delivery atleast that was the case for me!
Click to expand...
That sounds strange. As a general norm, all the badges are pasted in the plant itself.

Hi, Aria 4x2 launch is not far. It has reached some dealers.

Other specification will be same as current ARIA Pleasure variant.

I'm upset because it 4x2 only come in base model. [thinking]

Tata Motors today added another feather to the current line with the addition of Tata Aria 4x2 which company prefers to call a luxurious creation with the finesse of a sedan and the muscle of an SUV all combined in one car with 4x2 option.

Tata Motors today launched the Tata Aria 4x2, a luxurious creation with the finesse of a sedan and the muscle of an SUV all combined in one car with 4x2 option.

Launching the Tata Aria 4x2, Mr. P M Telang, Managing Director - India Operations, Tata Motors said, "As the first Indian 4x4 crossover, the Tata Aria has broken a new path for Tata Motors. With the introduction of the Aria 4x2, we make the range comprehensive. The pleasure of the Aria, combining the finesse of a sedan with the muscle of an SUV, can now be availed by a larger customer segment."

Under the hood, the Aria 4X2 comes with 2.2 litre Direct Injection Common Rail (DICOR) engine, with variable turbine technology and 32-bit ECU delivers 140 PS power and 320 Nm torque.
It is equipped with disc brakes on all four wheels resulting in superior braking effectiveness and better control. The Tata Aria 4x2 is being launched in three trim levels - the Aria Prestige at the top end, the Aria Pleasure and the Aria Pure.

The Prices of respective variants have been mentioned below: (Ex. Showroom New Delhi) 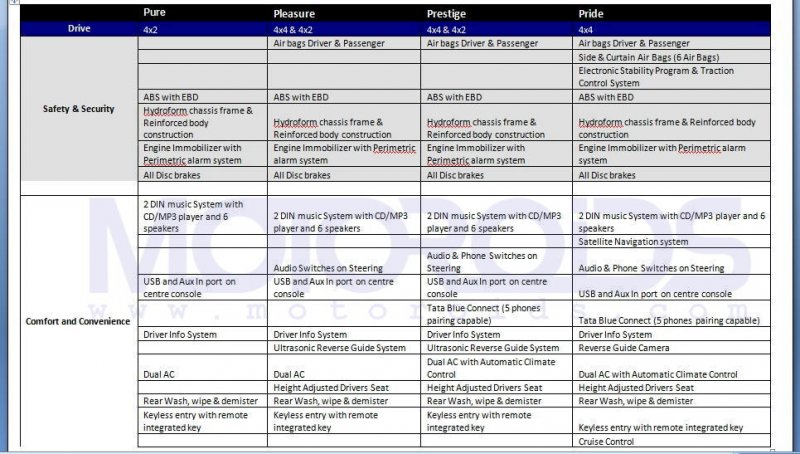 Image Source: Motoroids
Last edited by a moderator: Aug 2, 2011
You must log in or register to reply here.