As usual, new car is one step ahead, so natural candidate was Toyota Fortuner, & masculine view (Don't mess with me type) was far more pleasing. But at 25+ lacs, interior same as Innova, bare minimum features, non availability of TD made TF unacceptable after one visit to Toyota dealer. So real hunt began.

My profile:
1) Two major & several minor accidents had made me chauffer driven person
2) Highway tour to nearby city within state once in 1-2 months, total km per year ~15K.
3) <1% is off roading, that is 0.5km patch to my farmhouse becomes so muddy in monsoon that either need to go by longer route + some walking to reach farmhouse
4) fond of electronic gizmo, so always like things with more features.
5) No AT vehicles, as my i10 is giving only 10kmpl, as opposed to 18kmpl by i10 MT.

1) Mitsubishi Pajero Anniversary edition - I never understand how come TF rules the 25L spectrum when such a beautiful mighty car with unparalled legacy & much better features exists. But I found dealers from major cities in Gujarat had been cancelled & only one dealer newly appointed in Surat, some ~350kms away. The dealer was kind enough to send new vehicle for TD, & during TD, sales executive insisted for off roading & I took him to hilly area, where PS proved itself "Baap of SUV". I liked the vehicle very much, but as ASS was too far & whether will remain for next 8-10 years, with deep sense of regret, had to part with it.

2) Mahindra XUV500 - This will remain in my heart, as I (+ my son) liked it very much due to never ending list of features which make even costlier SUVs feel shame, but long list of niggles & my absolute ignorance about car technicalities took it out of the list. Also new XUV500 sportz edition was ready available but was FWD only, but I was thinking in terms of AWD, as it might be safer to use on road in rainy season & may be useful to reach my farmhouse in monsoon, but non availability of AWD TD vehicle (dealer had not sold single AWD XUV500 in 2 years) & online reviews mention it as soft roader, & wife not happy with overdone front appearance, so had to part with it. I told my wife RX6 would be my wife but XUV500 will remain girlfriend. Great kudos to Mahindra for innovating such a SUV.

3) Mahindra SsangYong Rexton RX6 - Didn't think about it till we had reached Mahindra showroom for XUV. I visited Mahindra dealer 2-3 times for XUV & every time RX6 was eye catcher. My wife & daughter were pleased with sober appearance.
I too found some features more than PS & during long TD, RX6 was able to go every place in hilly terrain where PS had gone. So ultimately more features + sober appearance + 4L capability made RX6 the winner after 3-4 weeks of sleepless nights & countless reviews.

So here comes the T-Rex, name given by my daughter.


Side view at home 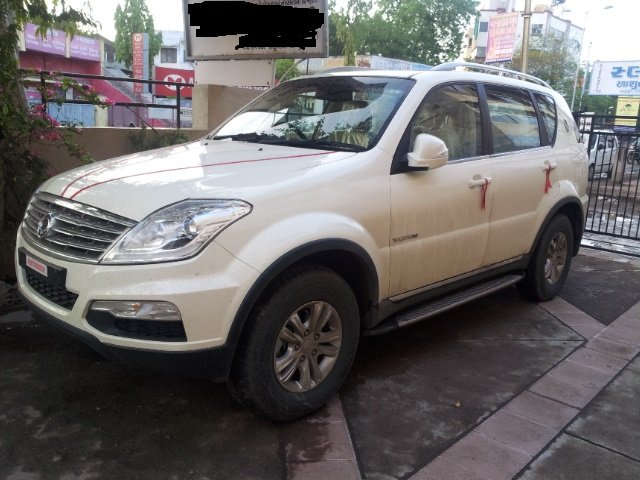 T-Rex came with ODO reading 282 km, but as was readily available, I accepted it. 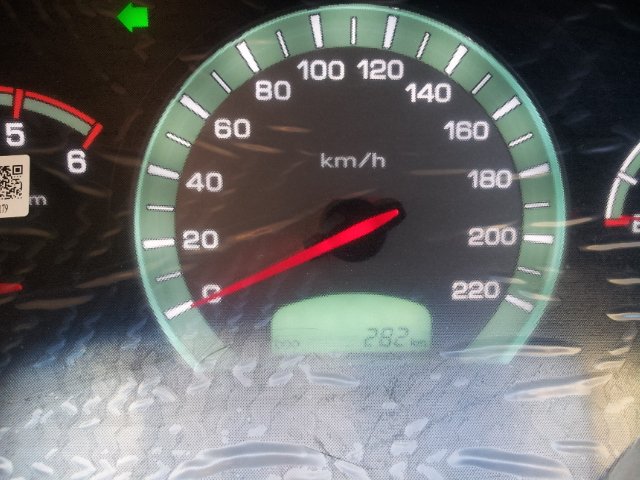 Low range transfer switch, just between steering & driver side door - I wish it would be somewhat at little difficult to reach place (central console lower part). My driver thought it might be some light switch & found engine revving, so soon I ask to clutch & default to 4H position. 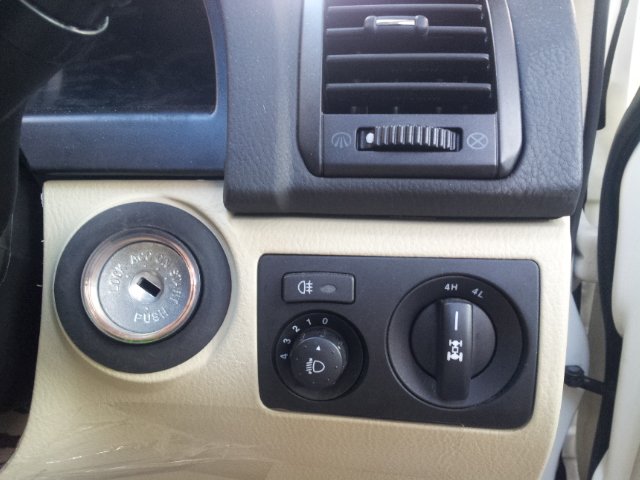 IRVM view is messy, so Reverse camera is a must (as such it is optional, though all wiring is in place). 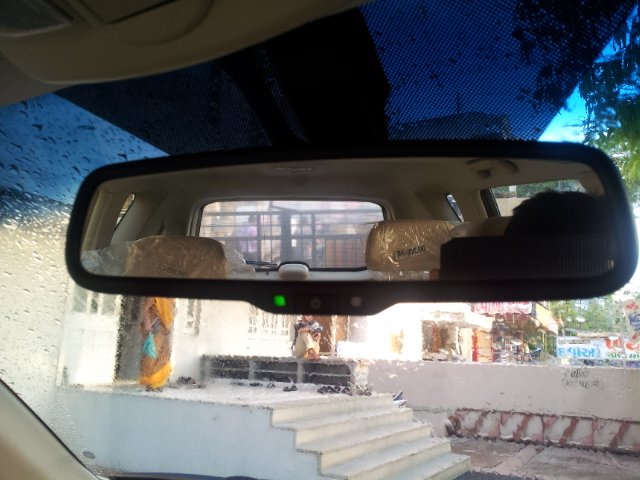 Kenwood unit in Central console - Navigation (Map My India), DVD/USB/Aux player, Bluetooth mobile + audio ( steering had audio buttons but no dedicated buttons for mobile call receive or terminate, however this buttons are programmable) 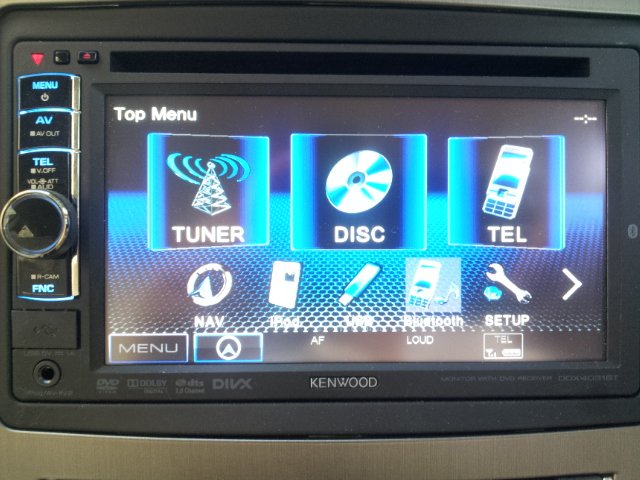 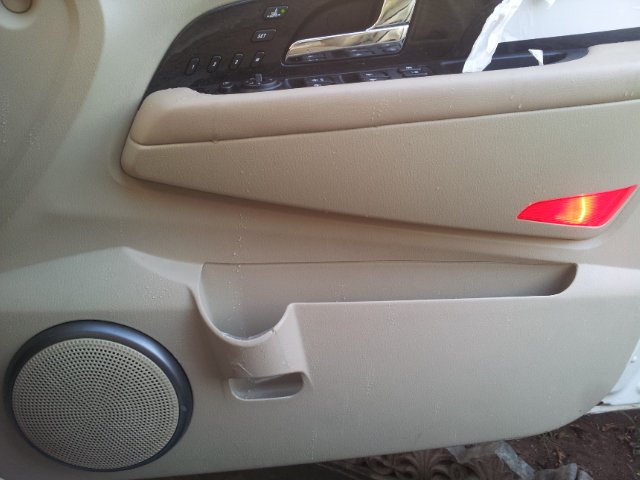 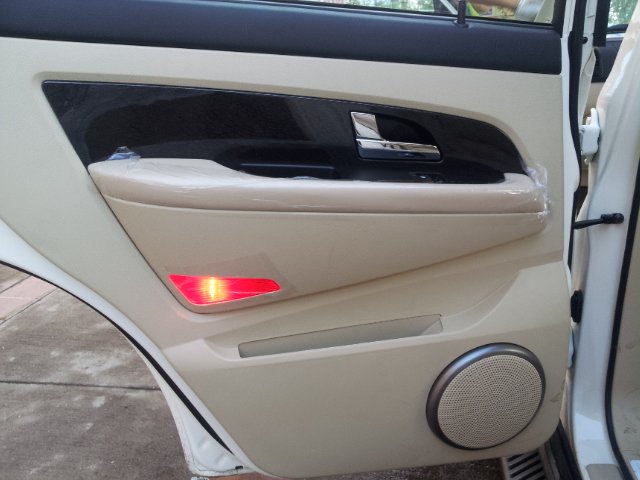 Parking brake handle is towards passenger side rather than driver side 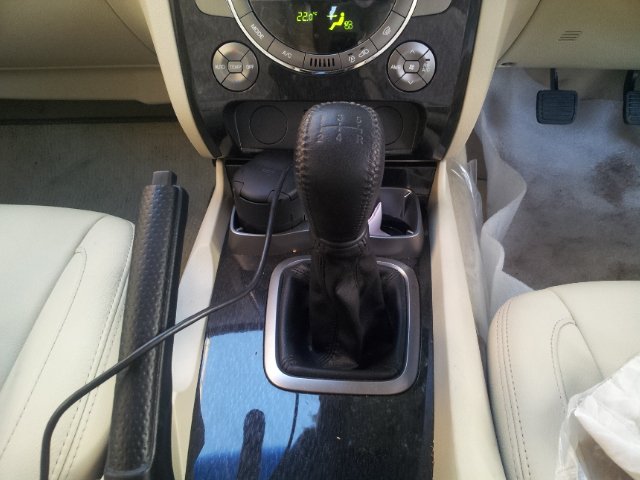 Rear side view with emblems 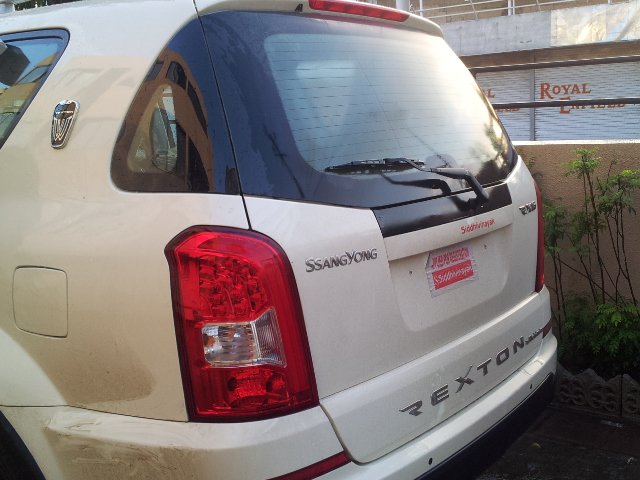 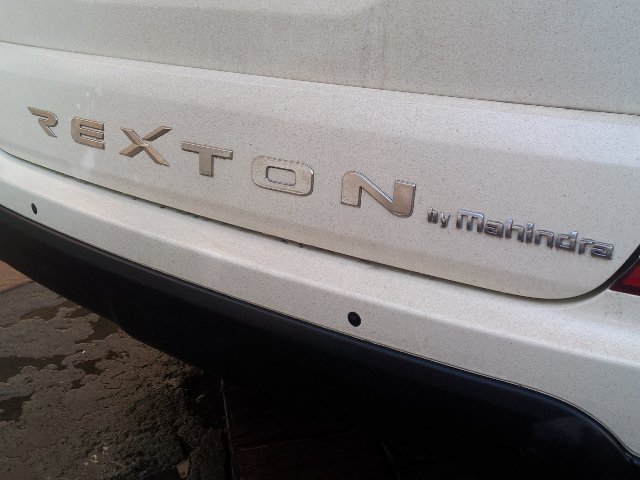 Steering mounted controls - 2 are blank, could have made to be used as mobile call receive & terminate - Mahindra, are you listening!!! All 6 buttons are re-programmable. 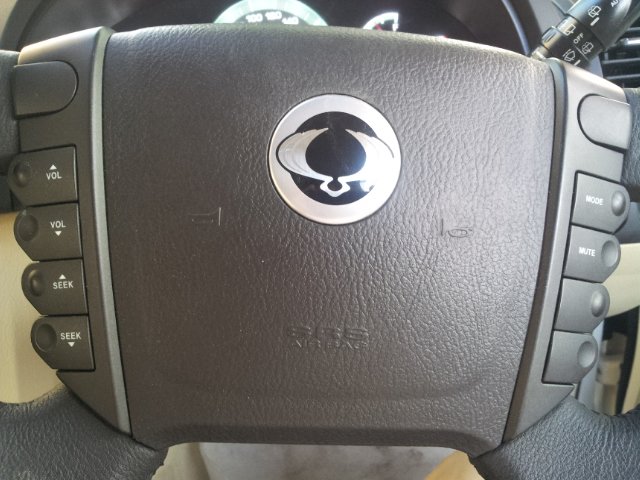 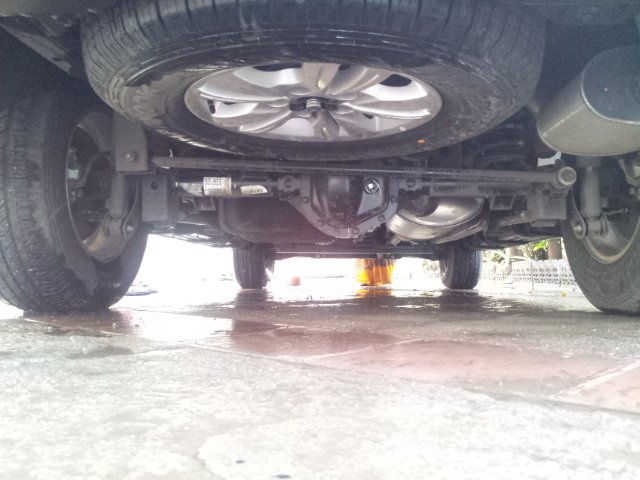 when 3rd row is folded, much bigger boot space. I had preserved woofer & amplifier from Innova, will take tomorrow to ASS to fit them. 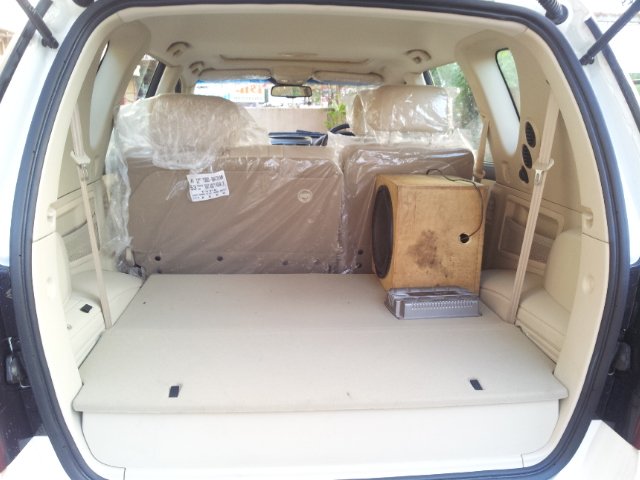 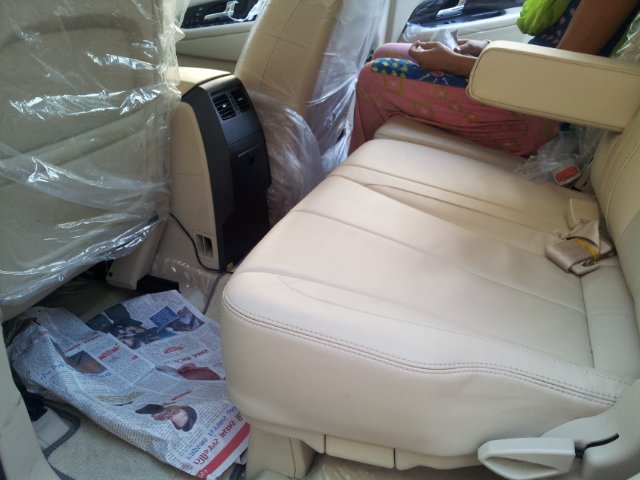 Headlight on at night 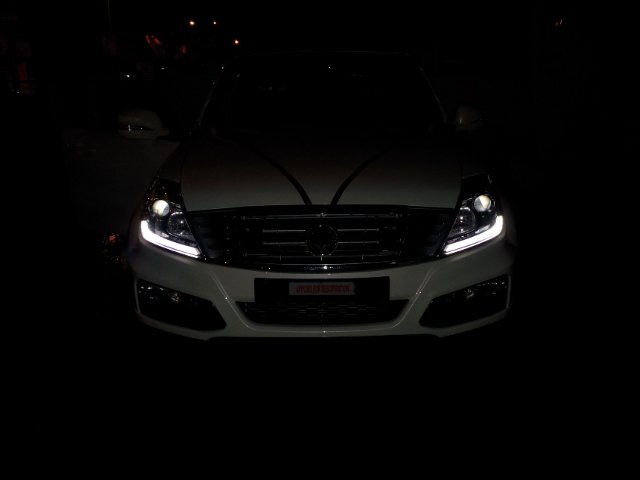 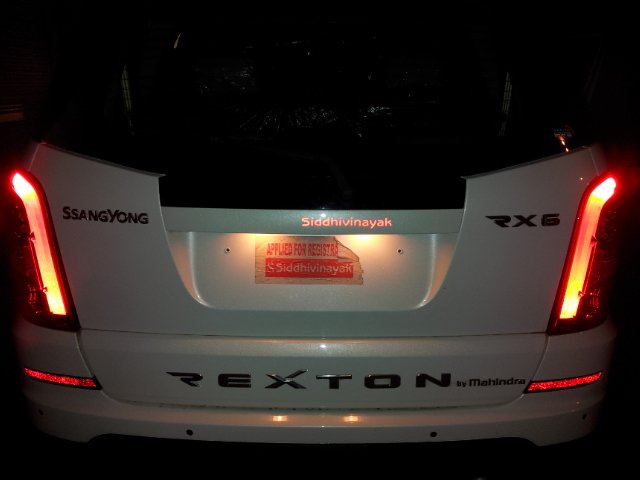 Salient points of my short experience of 500KM highway trip to Rajkot.

Ride quality: Much better as compared to XUV500, at par with Innova & PS. Can easily glide on rough road, small bumps & potholes, but thud on large bumps or potholes with speed. NVH is most appropriate, hardly any rattle/crackle audible.

Handling: Since using Innova since long, I never felt roll over, & so in RX6, never felt perceptible roll over in routine driving. Don't know about sharp turn at high speed because never doing it.

Driver Seat: Driver seat is 8-way electronically adjustable, & keeps 3 position in memory along with ORVM position. The better part is once you stop the car & remove key, driver seat automatically recede down & back, so very easy egress & ingress. Sometime it doesn't recede ( I may not be doing perfect required sequence - will see from manual if any), then egress / ingress is difficult ( I use high position).

2nd row: Plenty legroom & headroom in 2nd row seat, even when front seat are pushed maximum back. However this advantage cannot be passed to 3rd row, as 2nd row seats can't be slide forward. (like XUV 500). 2nd row is foldable 60:40 & recline also. 2nd row can be folded on either side, but 60% is on RHS. So if somebody wants to go to 3rd row from LHS rear door (as usual practice in India due to traffic), 2 passengers from 2nd seat has to come down, & if from RHS side, only one passenger from 2nd seat has to come down.

3rd row seats basically for in-laws & kids, as had no headrests, can't recline back & essentially flush on floor, so knee points up, so useless for long journeys. Also 3rd row is sofa, so one can't fold 50% as in other SUV to accommodate 6th passenger & extra luggage.

Speed: Driver was easily revving upto 100-120KM, but I ask him not to speed >100km, as I read somewhere that in initial 2000kms, better to drive less than 100kmph, at different speed. But it appear it can easily take any speed abuse thrown at it. I am eager to complete 2000KM limit before September as I am going to use expressway while going to Baroda & will try maximum speed.

Brake: It is there when required. No issue. Linear feeling throughout push on brake pedal.

Steering: is very light, never appear it is steering of SUV. Those who like feedback from steering will be disappointed. Whether take sharp turn or rough road, it is always very light. It is said steering is speed sensitive, but I find same from 0-100 kmph.

Steering controls: Light & Wipers controls are European style, i.e. so Indians find little difficult to get adjust to it.

Central console: Kenwood unit is impeccable, sound quality is better than average. Extreme bass lover like me still need additional amplifier + woofer. Going tomorrow to ASS for fitting of amplifier (below front passenger seat) & woofer in boot space. Will write more about that when it is done.

Bluetooth connectivity: from mobile phones to kenwood unit is seamless, for calls & audio. Only grievance is that no dedicated buttons on steering for mobile call receive or terminate, or no voice call dial support (unless it is supported by phone) like Ford Ecosport.

Air Condition: It is automatic climate control with blower function for 2nd row, & 3rd has dedicated a/c and blower. It is not as chiller as XUV500 but definitely enjoyable with 5-10min. BY default it is fresh air intake, & you need to press one switch to use "recirculate air in cabin".

12V outlet: 3 such sockets in dashboard & 1 in luggage compartment in boot space, so no dedicated socket for 2nd & 3rd row like XUV 500.
M

keep the thread alive with periodic updates and further details

Congrats on the new car. Have a lot of fun and enjoyment with it. Could you please provide the OTR price and breakup?

Congrats on your T-rex

That is one huge piece of engineering . Do update on the vehicles performance

Congrats on your Rexton. Wich you many happy miles ahead.

nikhn said:
Congrats on the new car. Have a lot of fun and enjoyment with it. Could you please provide the OTR price and breakup?
Click to expand...
2021551 Ex-showroom price + 4000 handling & Processing + 108792 RTO + 26388 Corporation tax = 2160911 OTR (Discount is Insurance 60,000 Tata AIG Pearl plus + reverse camera, yet to be installed). No accessories installed, almost everything is there. Planning for installing amplifier + Woofer which already had from last car. May be front & rear bull bars in future, if motorcyclists keep abusing my car

Wow congrats for your Rexton. Is it the first Rexton in our board. happy miles

Congratulations for driving in the first rexton on the forum, wish you many many safe miles!

congrats on your new arrival

. do keep updating. i too was impressed & fell in love with rexton when i went to mahindra ass to service my bolero. but since its beyond my capacity to buy one now, will get satisfaction by reading about your vehicle.

congratulations on your latest possession.

Awesome review. Your attention to detail is really good.

Even I think going for Fortuner is waste of money. If I would have that much cash, I would prefer to buy a XUV500 & a Mahindra Reva

Hi,
Congratulations of your new Rextron RX6. Wishes to clock many more miles.

Congratulations dhoom9 for your T-Rex, wishing you millions of happy, safe and trouble free ride with it

Many Congratulations on your new T-Rex. Keep updating the thread with your experiences. Also post some full dashboard pictures.
You must log in or register to reply here.