Someone Scratched My Car with Keys. Need Advice.

@ chayan, it is good to know that JAZZ is back, 15 days is too much AFA HoASS is concerned.I can imagine the inconvenience faced by you. Medium work quantity was not expected from them.
Please discuss about cost incurred.

chayan said:
. Noticed that Jazz has a fibre petrol tank.
.
Click to expand...
We must congratulate HONDA engineers as they are trying to adopt EURO 4 (? BS4)technology.

Euro 4 fuels are low sulfer fuels. While removing the sulfer from EURO 3(? BS3) fuel so as to convert it in to EURO 4 fuel, aromatic substances in it are also removed. Euro 4 fuel thus derived can lead to corrosion of ' metal' fuel tank reducing its life span.

So fibre tank is good move from Hondas.The countries and automakers who have not made fibre fuel tank compulsory claim that ' benefit of reduced pollution ' due to EURO 4 fuel outweighs the losses incurred due to corrosion.
Last edited: Nov 12, 2012
M

I might be late in responding but for such scratches the best you can do is ignore them. I know its tough but... Indian laws are not that rigid that would trial someone for damaging ones property.
If you don't have personal parking at your home then I suspect the incident could have happened there itself.
Point to note, repainting for such a small thing will decrease the resale value as its next to impossible to match the colour tones considering the time factor as well of the new colour vis a vis the old one. I don't think insurance companies will even budge for such an issue.
Wait it out: what might the same area of scratch gets some more beating so that it could get covered under insurance or sell your car after sometime.

In a nutshell, don't go for a paint job for such a minor issue and don't frown. There are people who still dream of owning a car, you my friend already have one.

Just chill, thats the best we could.
R

My new car which is 6 days old was scratched in the mall parking. Noticed it after coming back from dinner.
Have no clue how it happened.

Disappointed yes but was expecting it happen one or the other day.

Attaching snaps of the same.

Please suggest what should be done for this and some measures like paint sealant, 3m scratch guard etc to reduce things like this.

Can this be fixed by me or it needs pro job?

I am novice on all these things.

i also had a similar damage in my verna 5 years back. i got a paint touch up at my first service and the rust didn't spread to any other part. i won't spend 7k for the damage you reported. ask your advisor to touch up the area using leftover paint at your next service, 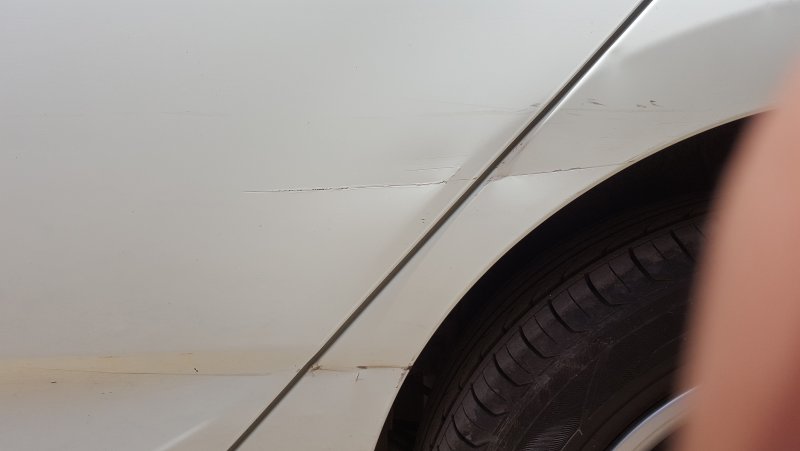