Sahara's joint partnership with the Force India F1 Team will provide an opportunity for the team to further invest in cutting edge technology to improve performance and achieve new heights. On this occasion ‘Saharasri’ Subrata Roy Sahara, Managing Worker and Chairman, Sahara India Pariwar said, “India is reaching new heights in all spheres, including sports. Formula One car racing has always remained a bastion of the western world. The advent of India in this exciting sport has remained a matter of pride for all our countrymen. I feel doubly proud that Sahara is the co-owner of India’s only F1 team and I am sure that through the Sahara Force India F1 Team, we will together bring pride and laurels to our beloved nation.”

The investment could not have come at a more opportune time as India looks forward to hosting the inaugural Indian Grand Prix at the Buddh International Circuit, Greater Noida and as millions of fans gear up to witness their Formula One dreams come alive in India. Shri Subrata Roy conveys his high appreciation and heartfelt thanks to Dr. Mallya for including India in the prestigious Formula One circuit and for guiding Force India to its current position of sixth in the Formula One world championship. Speaking about the partnership with the Sahara Group, Dr. Vijay Mallya, Team Principal and Managing Director of the Force India Formula One Team said, “I am delighted to welcome Saharasri Subrata Roy Sahara as Chairman of Sahara Force India. It has indeed been a matter of pride for me to put India on the F1 map with Force India and raise the performance of the team to its current levels. The Sahara Group has played a very important role in the development of sport in the country and is an ideal partner to take the Force India F1 Team to greater success in the Formula One World Championship". 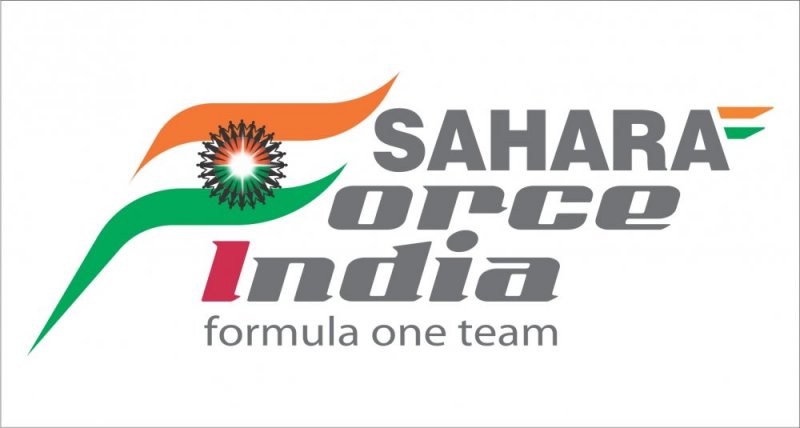 Thats a good news, just saw the interviews of Subrato Roy and Vijay Mallya on Times Now.
But I always wonder, from where Sahara gets so much of money to invest in sports, as they are not doing any good in their business.
They bought IPL Pune team for 1700 crs, They paid 217 crs for Pune's Cricket Stadium, for more than last 6-7 years they are sponsoring Indian Cricket Team, and Indian Hockey team too, and now they have Invested 100 mn dollars.
Though it feels good that they are promoting sports in India.

But I always wonder, from where Sahara gets so much of money to invest in sports, as they are not doing any good in their business.
Click to expand...
Even I wonder the same [thinking]

Sahara has a RNBC license with which they are picking daily, monthly collection from the general public with a promise to return at a good return. I guess this money is being routed here to increase visibility of its brand to increase the cash inflow.

A helping hand from one powerful lobby to another powerful man in distress. This is a great news anyway, as the stakes remain in India. There were rumours earlier that Dr. Mallya might sell off the company to an outsider, but he came back and refuted these claims squarely.

With some more money pumped in, I just wish that some part of it flows back to India for development of infra and planning. We need drivers and crew coming up from our own backyard. Even for our debut F1, we are getting marshals flown from Dubai.

Chandranath said:
Sahara has a RNBC license with which they are picking daily, monthly collection from the general public with a promise to return at a good return. I guess this money is being routed here to increase visibility of its brand to increase the cash inflow.

But good for sports and good that they have recognised F1 other than cricket
Click to expand...
I know this OT but What is RNBC? but dont they have RBI/ SEBI regulations for Public Money?

Here is official image of the ceremony. 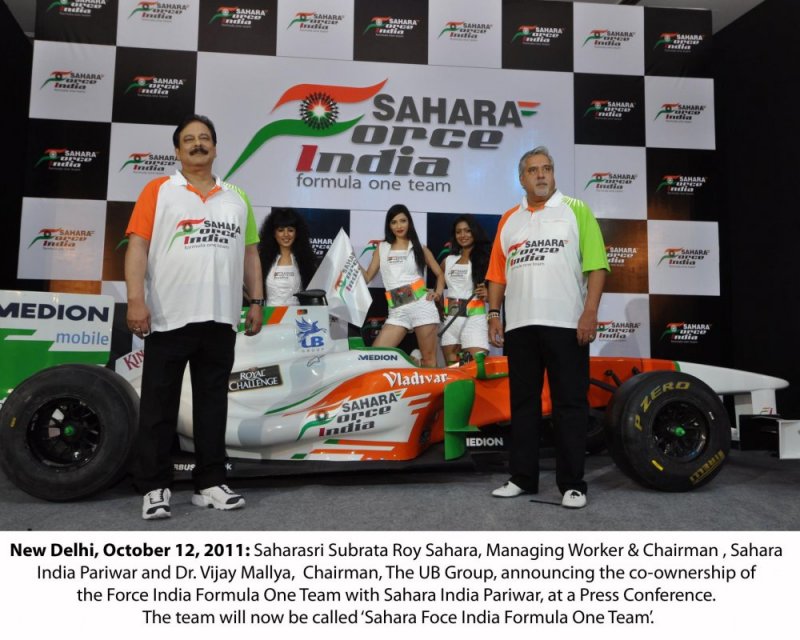 I always had a suspicion that Mallya was willing to get rid of his business.

I think Mallya is a good businessman showcasing his efficiency of his skills of business, like he did with the dying kingfisher during his takeover.. but also since he too being a racer once upon a time, he has some soft-corner towards motorsports!
M

Atleast all this 'black' money(allegedly, ofcourse

) is being channeled into something exciting and constructive so i'm not going to sweat over this deal. A little conspicous consumption is good for the economy , actually.

Its not really black money. Its clean money collected from public through brokers at a high cost with a promise to pay back after say 10 years at a rate of interest which is significantly higher than the bank rates. Question is whether F1 will give back that rate of interest to Sahara. Hope so.

drivetech4 said:
I know this OT but What is RNBC? but dont they have RBI/ SEBI regulations for Public Money?
Click to expand...
RNBC is a residuary Non Banking Company who acts as a pseudo bank. But they are under strict RBI regulations like investing around 90% (I might be wrong with the percent but near about) of money collected from public in approved Govt securities.

Chandranath said:
But they are under strict RBI regulations like investing around 90% (I might be wrong with the percent but near about) of money collected from public in approved Govt securities.
Click to expand...
You are not wrong, its correct, but does that 10% contribute to so much of money? Its the business of converting black money into white, through Sahara!

Force India has been given a boost ahead of the 2013 season with the news of the approval of a £50 million investment programme.

Team boss Vijay Mallya said the squad's board met in India after the Abu Dhabi Grand Prix and approved the programme, which will mean Force India will invest heavily in new technology to boost the design team for the coming seasons.

Force India looks set to finish the 2012 season in seventh position in the constructors' championship, having scored 99 points ahead of the final race in Brazil.

Mallya believes his team has a lot of reasons to be proud about its achievements this year, especially considering some of the equipment it is using to design its car is from the era when the outfit was known as Jordan.

"Looking back at the season so far, we have every reason to feel proud," he said.

"We've scored more points than in any previous season and every year we've demonstrated that we've gone up the ladder.

"And we've taken fairly significant steps, not just baby steps. Given the tools that we have, which are mostly of the Jordan era, we have done exceptionally well."

Force India “is in crisis” and it is possible the Silverstone based team “could collapse”.
That is the claim of the Italiaracing magazine, who correctly reported some years ago that Pirelli would become the sport’s new tyre supplier.

Now, the Italian publication is reporting from sources that Vijay Mallya – Force India’s embattled owner who has lost his billionaire status – is experiencing “severe economic difficulties with his companies”.

Italiaracing claims that, in recent days, F1 chief executive Bernie Ecclestone has “activated a plan to save the (Force India) team.”

The sources mentioned the possibility of a return to F1 for Colin Kolles, the team boss who in the wake of the Silverstone based team Jordan’s demise some years ago led the subsequent incarnations Spyker and Midland, and finally Force India.

As head of HRT, Kolles left F1 at the end of 2011, a year before the Spanish team’s collapse under new management.

Italiaracing also mentioned the former Renault chief and well-known Ecclestone ally Flavio Briatore, who has been out of F1 since the ‘crashgate’ scandal.

I wonder the authenticity on this piece of news. so take it with a pinch of salt

This week, it emerged that lenders to Mallya’s failing airline Kingfisher are set to sell the billionaire’s collateral assets as they recall the loans.

And the very latest reports are that Force India’s title sponsor Subrata Roy, of the Indian giant Sahara, has had 100 of his and the conglomerate’s bank accounts frozen by the Securities and Exchange Board of India over failing to repay investors.

Referring on Thursday to team supremo Mallya’s troubles, Force India’s Bob Fernley said: “There is a disconnect between what happens in Vijay’s business and what Vijay is doing on the F1 team.

“Whether Kingfisher or United Spirits is doing well or not doesn’t affect the team, and it’s very difficult for us to get that message across, although we have been trying for several years,” he is quoted by the Guardian newspaper.

Mallya’s troubles don’t affect Force India – Fernley
You must log in or register to reply here.