This one is especially for our Royal Enfield Enthusiasts, though a no good news since its not available in India, anyways...

---------
Royal Enfield lovers in US can be considered far more luckier than the Indian counterparts as now they can buy the olive green Royal Enfield Classic 500 Military from their nearest RE dealer at a cost starting from $6395. If you are thinking that why you cannot buy an olive green RE in India then the answer is as simple as the Indian laws does not permit this olive green color to be used on civilian vehicles.

Apart from this attractive olive green color the American Royal Enfield C5 Military comes up with much improved tyres along with an oxygen sensor in the ECU. These features are not present in our Indian Classic 500UCE. On the other note, we hope to see theat the company increases its production capacity in India soon so that at least we can have the existing models delivered with less waiting period in the country. Olive green is still far away for us.
--------- 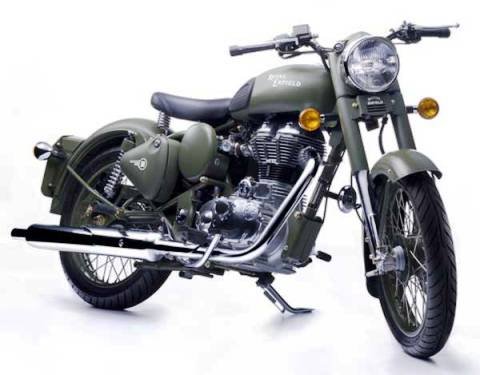 If the other countries allow Olive green then why not India??

Atleast RE can include the new features in the existing Bullet!

the other feature is oxygen sensor but it cant be done without thoching ECU and remap and that also isn't allowed in India!
A

hey man cops are not so much sleeping now! they can even identify names of cars and green bullet is used by army guys so surely they wont allow any civilian to use it.
A

@ umang
That is only IF they know that green bikes are not allowed to civilians.
and i expect them to NOT know such details.

I think most of the cops are aware of it. I am very happy for RE, and bullet

It's called Battle Green as per the website. For India they have launched the same bike in Khaki and it's called, Desert Storm.
S

The colour cannot be sold in India, thanks to our Motor Vehicles Act. The C500 sold in India did not have the Lambda (as present in the US C500) sensor for reasons of cost.
P

Sam Dinkar said:
The colour cannot be sold in India, thanks to our Motor Vehicles Act. The C500 sold in India did not have the Lambda (as present in the US C500) sensor for reasons of cost.
Click to expand...
What about Khaki, White, Blue? These are also used by the armed forces.
S

P3T3R said:
What about Khaki, White, Blue? These are also used by the armed forces.
Click to expand...
As per Rule 121 of the Central Motor Vehicle Rules: No motor vehicle including agricultural tractor and construction equipment vehicle shall be painted in olive green colour except those belonging to the Defence department.

Sam sir, even though CMVR says that, there are a sizeable number of vehicles in India non-defence which have this color & as far as I know they are not objected to. I believe RE would have checked all the legal angles & checked with the Police department before launching the motorcycle in this color otherwise they would have never advertised it on their Indian website
S

That's the catch. The website also says that this model is not available in India. So, no sweat ! The ban is on olive green colour and not on colours that resemble it.

the guys @ RE are plain lazy & bit racists... its not abt the cost that they aren't launching those export models in India.

vipin7864 said:
the guys @ RE are plain lazy & bit racists... its not abt the cost that they aren't launching those export models in India.

Click to expand...
Export models are not very different from the once sold in India...infact if you get a chance to visit the RE factory in Chennai you will find that both Indian & export models are on the same production belt using the same components...
You must log in or register to reply here.