A shrine dedicated to the Motorcycle Devta, also called Bullet Baba. The god is a motorcycle and such is faith that hundreds of devotees turn up every day to pray for a safe journey. The shrine is near Chotila village, around 20 km away from Pali en route to Jodhpur on the highway, has a Royal Enfield 350 cc motorbike as its deity.

The temple beside the Enfield motorbike has a big picture of Om Singh,fondly known as Om Banna.

The story goes that back in 1991, on a fateful summer night, Om Bana was returning from Pali to his native Chotila on his Bullet 350 when it skidded and hit a tree, killing him on the spot. The tree stands over the battered vehicle till date. Villagers say after Om Bana’s death, the motorbike was taken to a local police station. But next day morning, it was found at the accident spot.Police initially thought it was a prank and after emptying the fuel tank they brought the bike back to the station. However, the motorcycle was again at the accident spot the next day.Villagers here believe Bana’s spirit still hovers around the place and they can hear the Royal Enfield rev up at night.After tales of Om Bana riding his motorcycle on this road began to spread, his followers increased in number.” One recounts the story of one of drivers whose vehicle skidded and fell into a ditch not far from the spot of Bana’s accident. “The driver was injured and bleeding in the vehicle when he swore that Om Bana came to him and helped him out. Such stories only increased this temple’s reputation

As a result of this unknown mystery people started flocking to this place and
built a temple.The temple has its own priest, Poonam Giri, who has been incharge of the upkeep of the shrine for two decades.Devotees also apply the ’tilak’ mark and tie a red thread on the motorbike.

Travellers, especially drivers of vehicles that pass by, offer prayers at the site, which is almost in the middle of the road. Some drivers also offer a small bottle of country liquor at the site, praying for a safe journey.The busy Pali-Jodhpur highway ensures a constant flow of pilgrims, who are easy enough to spot, with their bottles of liquor.

Hard to believe this? Our country is too strange. We have even temples for actress in south India!

droy said:
Villagers here believe Bana’s spirit still hovers around the place and they can hear the Royal Enfield rev up at night.
Click to expand...
Who says the thump of the 350cc CI engine died with the UCE

Temple for Bullet in INDIA

Guys I found this story is quite interesting and thought of sharing here.

In India a village has built a temple for Motor Bike and people are worshiping the deity. 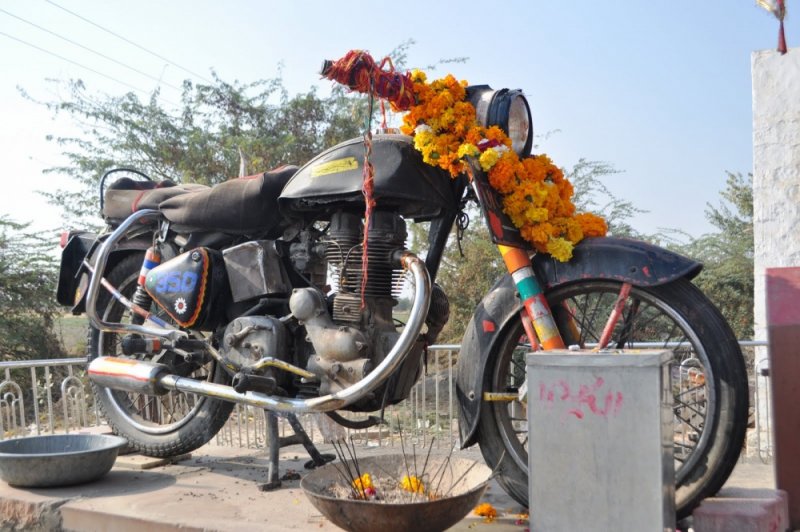 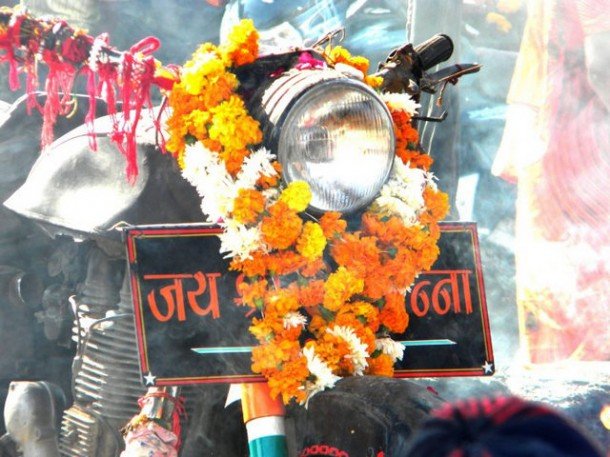 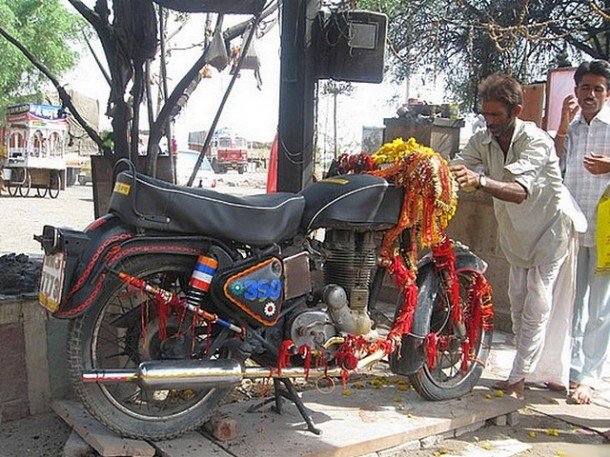 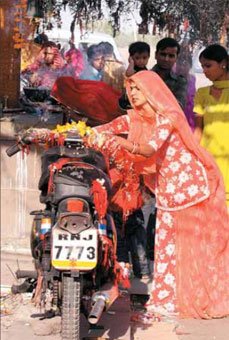 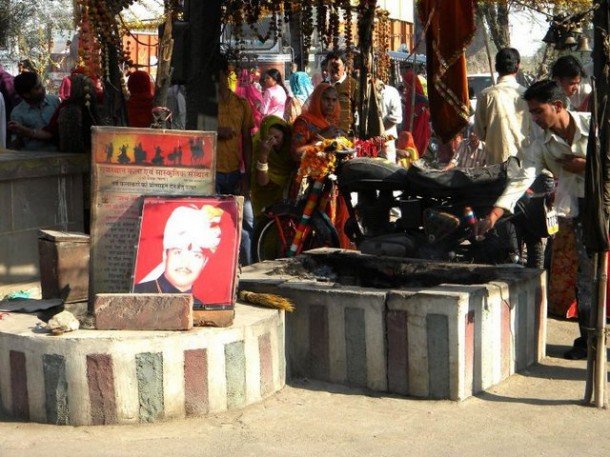 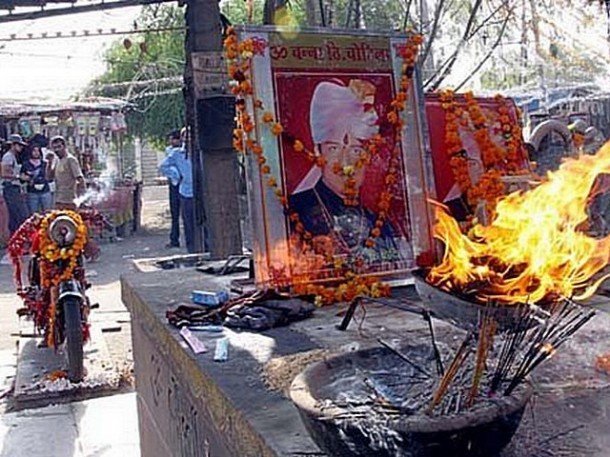 There is a village – Chottila – on the National Highway No.65 – between Jothpur and Bali in Rajasthan, India. It is here the “Bullet Baba Temple” is established. Some 20 years back, one Ombana alias Om Singh Rathore, the son of the village leader, was travelling in his Royal Enfield Bullet bike on this highway.

Just where the temple is situated now, there was a big pit and a tree and Om Singh died in a road accident – crashing on the tree and falling into that pit. It was just another bad accident for the people of that village, but what were happening after that made them froze in terror.
Police visited the accident spot, enquired about it and took the bike to the Police Station. A police constable in that station says “the bike which was seized and put inside the station-compound was missing the next day and was found at the accident spot. We thought somebody is playing a mischief and took back the bike to the station.

We emptied the petrol tank and bound the bike with iron-chains, but again the bike was found missing and when searched, it was standing at the accident spot. That’s all .. all of us were frightened like anything”
These events were enough for the villagers to go crazy with fear. They built a temple at the accident spot, put the bike there and started garlanding it to do poojas. Drivers passing that spot have become devotees. One of the drivers met with accident in the same spot and said the “dead” Rathore came and helped him to get up and rescued him.
This news spread like wild fire and from then on “Bullet Baba” has become a popular deity in the area with Poojas, Bhajans and worships by every one.

Nice find Appu, it really is a very interesting story any more info on this temple?

Even I too surprised after reading the Heading. But, once I go through the story I felt something strange & very interesting.

I think this link will give more info:

Sounds like a scooby doo episode. "The ghost of captain still rules this ship" lol.
I hope that doesn't hurt any feelings.
You must log in or register to reply here.