Ride To Nanded and Lonar

The ride to Lonar which most of the bullet clubs in South like from Mumbai, Pune, Nagpur, Hyderabad & some other places. 1 week before the ride my girl had her head light casing changed due to the difficulty I was facing with the handle which seemed cross because of not the handle being bent but the problem was with the casing itself. After the change there was little difference but on the highway it was different as I took her for a spin the weekend before the ride

I got up by about 5 & barely slept for 5hrs after the last minute packing & checking things the previous night. Got call from my fellow rider & we decided to meet up at a designated spot & then go to the meeting point at Runway 9 on the Medchal Highway. We started slowly & then picked up speed but I was unable to put speed & if I crossed 65 I got these big jerks & felt like something was holding my bike back. I was not sure & somehow felt maybe petrol mixture problem or probably the issue with tappets since they were a bit loose courtesy my mech.

Rest of the guys came to the meeting point, after having tea we waited a bit & then started for the ride. I again tried to pick up speed but again the same issue, so I was stuck at riding at 60 along with the tailing guy. I kept a steady pace & kept riding, most of the guy went ahead but slowed down seeing that my bike was not keeping up. They all stopped after sometime on the road side but I kept riding since I wanted to make a stop over at Dichpalli. By the time I reached Dichpalli it was around 10 AM. I called up the guys to see where they were, they said they stopped for breakfast & I better have mine at Dichaplli & be ready to depart. The road from Kamareddy to Dichpalli was still under construction & so had to be careful as only one side of the 4 lane highway was open.

I had my breakfast & after tried to checked around to see what the problem was, called my mech he assured me tappets wont be an issue & it might be something else, the bike was not staying idle, so I hang up & changed spark plug, then after a bit the bike seemed ok, however I did not look at a crucial piece which was the main culprit for all the fuss Shirley has created! The rest of the gang joined me & we finally set off towards Nizamabad & then to Nanded. This time my bike started racing & she was easily able to cross 90 which is my ideal speed & wouldn't go beyond. We crossed Nizamabad around 1 PM & had a stop at a road side dhaba about 40KM from Nanded. Had a sumptuous meal & we were there at the dhaba for a good 2 hrs. We started of & reached nanded at around 4:30 or 5 PM

Once we got the room & freshened up, we went to see Hola Moholla which happens there every year & Sikhs from all over the country converge there for Holi. The streets get filled with gulal powder around the Gurudwaras. I along with another camera friend & 2 of my gang members set of the see the action & try to capture the action as well. Gulal was flying all over the place & I was worried about the DSLR getting spoilt but I somehow kept it protected & took some pics as well. The final action ended with everyone running towards a lane with all their swords held in their hands. Thus ended the spectacle which I never saw in my life till now.

We roamed around the place on foot & had darshan & prasad from the guru there. Later on we went to laser show in an open garden auditorium. It was a one hour show, once done the whole gang went to have dinner at Panchali Restaurant. Food was alright but not too spicy either. Bill was just about 300+ or 400+ for 7 guys lol that cheap. One of my biker friend's shoe tore off like some acid was pour on it, he didn't use them much however the shoe happened to be of low quality. Me & him went in search of a shoe shop, we came out with shoe worth of 800 bucks! not so cheap here eh! but the need of the hour was like that.

We all mostly woke up around 9 or 10, then got showered leisurely & finally around 11 we had breakfast of Aloo & Gobi paratha with curd! yum food & that really made us sleepy. But we had to go.... went to mechanic nearby to get our darlings fixed since everyone had some small niggles with their darlings. Time was around 1 PM when we filled up our girl's bellies & started off towards Lonar. Since I knew the road a bit, initially I was to take lead but somehow the guys started ripping & I had to stay put as back bencher. However they missed the turn we had to take & I had to race ahead to stop them & turn back.

Had a small 2 minute break for Electral water refreshment & then we set off. The road till about Hingoli was good & after that it was just pathetic, the road was very narrow where only a single bus can fit comfortably on the road. The bumpy ride was taking toll on the guys, however we kept taking breaks & kept riding. At around 4 we entered a little bigger town about 40KM from Lonar, few of us guys had chaat there & sugarcane juice. Once our bellies were satisfied of their fill we got back but not before I stuck 2 band-aids on my fingers since they were bleeding a bit due to skin dryness. The rest of the road to Lonar was awesome & we guys started ripping so as to cover lost time & reach the crater in time before sun set.

We finally reached the spot & clicked some pics & did some masti & then went to the dorm to drop our luggage & get freshened up for the party. A bood 200+ bikers were present & the familiar ones greeted each other, booze was flowing freely & since I was tired had dinner but not before a bit of a fight over the preparation of food & the quality of it which was costing 200 bucks. I ate what I could & got back to the dorm along with others, then went out on my bike for a small stroll near by. We decided to sleep in late again & by the time we closed our eyes it was 2 AM already.

I woke up to the sound of the bikes starting & roaring in the morning around 7:30, got out for a bit & then took out my camera for some pics. Then dozed off again till about 9:15 AM. In the meanwhile 3 guys from our gang decided they want to leave in a hurry which they did. Me & the other 2 guys finally showered with not so good bathroom & an open window from where chilly air was blowing making my body have goosebumps.

We had breakfast of Poha & bread omelette. Once the bellies were satisfied, we kicked our girls to life & took a different route suggested by many that it is good. The was going to Manta onto the Nanded - Aurangabad highway. We rode at good speed but cautiously as the road was bumpy making every part in the body to shake. The 45KM of hell ended with us hitting the highway to Nanded. We started ripping & a little later took 5 mins break & then again it was open throttle for us & continuous ride as we wanted to reach Nanded asap & catch up with the rest of the gang alas that was not to be & my girl gave a burp saying she is getting empty (went to reserve) I slowed down & bit to 60 to save fuel but then on nudge from my fellow rider, I started ripping again throwing caution to winds. Luck was on my side & so found an Indian oil bunk. The Price of the petrol was a tad cheaper there it was 69.53!! compared to 73.05 in Hyderabad grrrrrrrrrrrrr!

Filled up my girl's tummy to the brim & poured 2T oil 100 ML into her belly so as she wouldn't give a big burp & burn a hole in the piston! We started ripping again & finally reached Nanded around 3:15. We did the 180+ KM stretch in just 3 hrs. From there we got lost a bit but after getting directions from the locals we hit the Hyderabad highway. We were in search of a good dhaba for food & to lie down a bit. Found one empty with cots in it, we made way to it, had a sumptuous meal & then dozed off for 1hr there without realizing the time. It was almost sun down by the time we woke up around 6, got freshened up & kicked the girls again into life & finally set off towards Hyderabad. We reached Nizamabad at around 7:15 & cause of my stupidity got lost again, yet again the locals came to our rescue.

A little earlier we got a call that one of the riders chain sprocket was gone & it wont go anywhere. We told them to stay put as we were going to reach the place soon. The night driving was a bit tiresome, as I can't see properly with blazing lights which are eye blinders however managed to reach the dhaba near Kamareddy without a scratch. We stopped there for half an hour & then set off with some other fellow riders of our club. Since the highway was four lane everyone was doing 90-100-110 on that road. We rode continuously for quite sometime. Then just about 40KM from Hyderabad we all stopped at a dhaba & had our dinner, by that time I was restless & sleepy. We bid adieu to other guys & started off. I dropped off my pillion rider at Paradise & then I left for my home. By the time I reached home it was 1:45 AM. Got my stuff into my room, took off my riding stuff & finally hit the sack. Thus ended my trip to Lonar in the hot summer

The one thing that kept me alive & kicking on the highway the electral mixed in water. I kept sipping it, even though my lips too harsh beating due to the hot air & they went literally dry. Having a moisturizer will be beneficial even if anyone is going in the car as well.

Thanks for reading such a long one. Hope you guys enjoy it as much as I did riding with my girl

Great travelogue but this thread feels incomplete without photographs. Please upload them soon to complement the write up.

A few photos of the ride, sorry took some time to post them was kind of busy 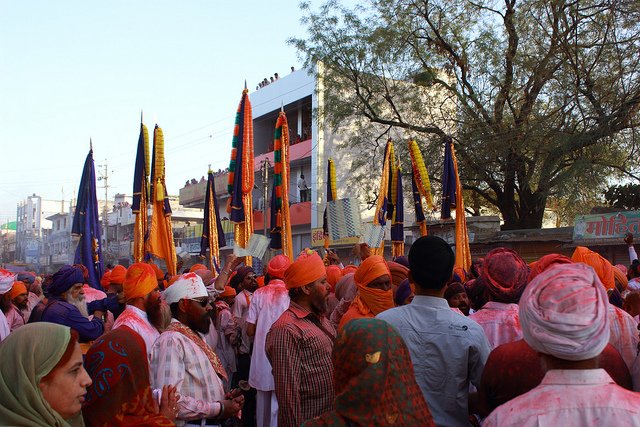 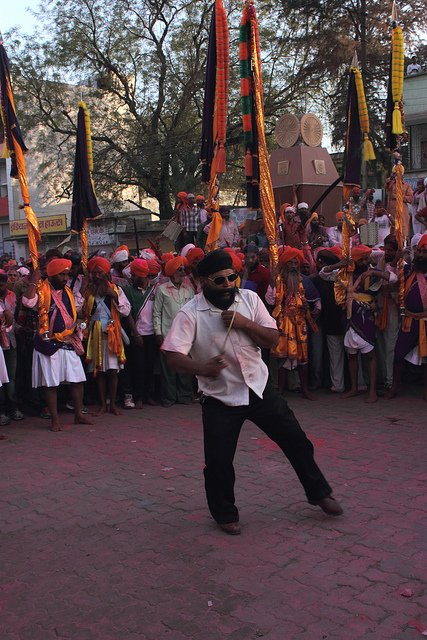 On a Walk to 2nd Gurudwara 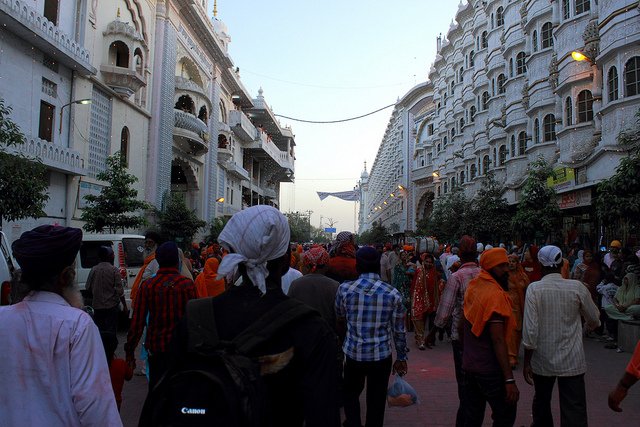 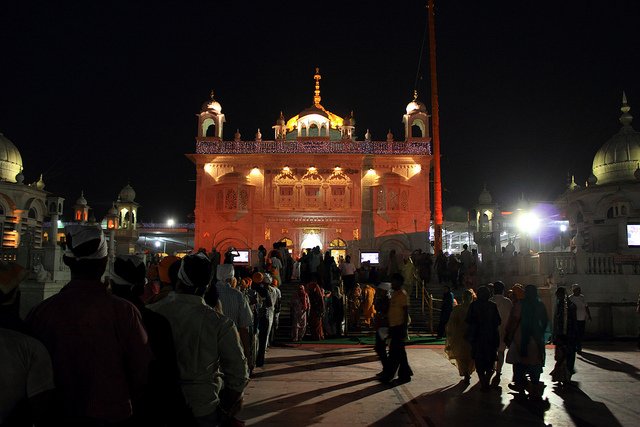 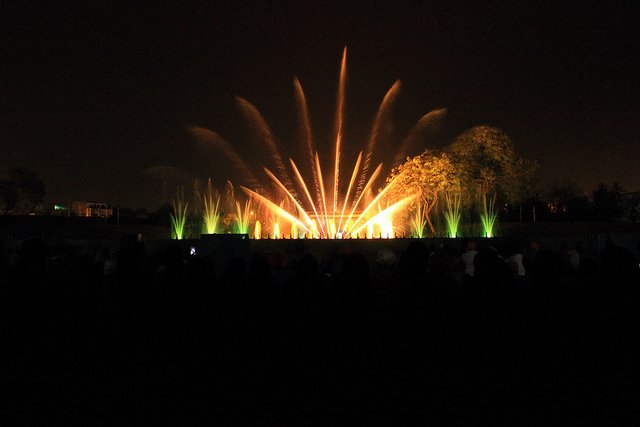 On Way to Lonar 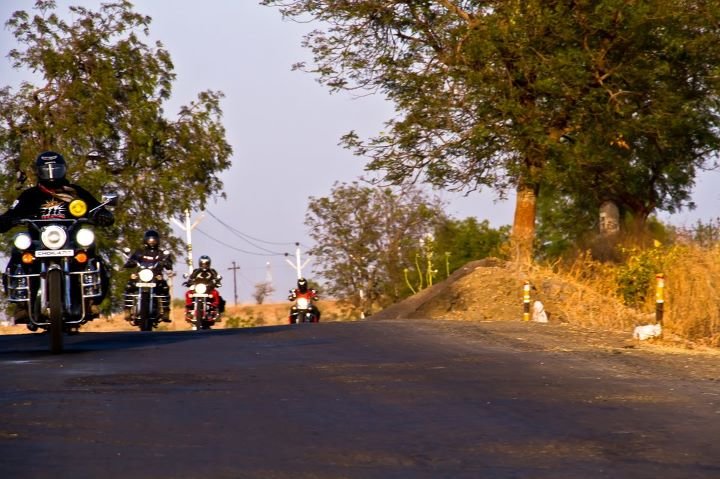 My girl Shirley at Lonar 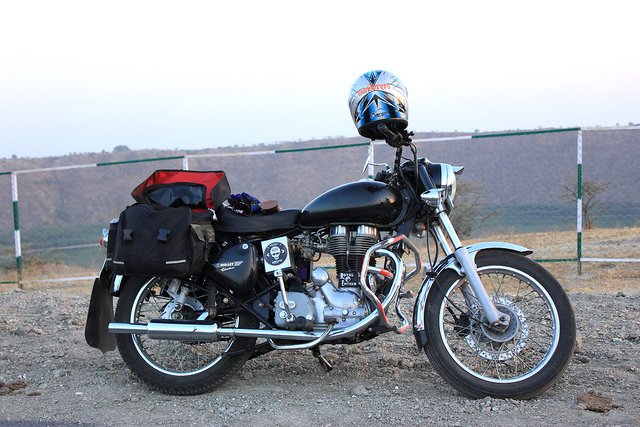 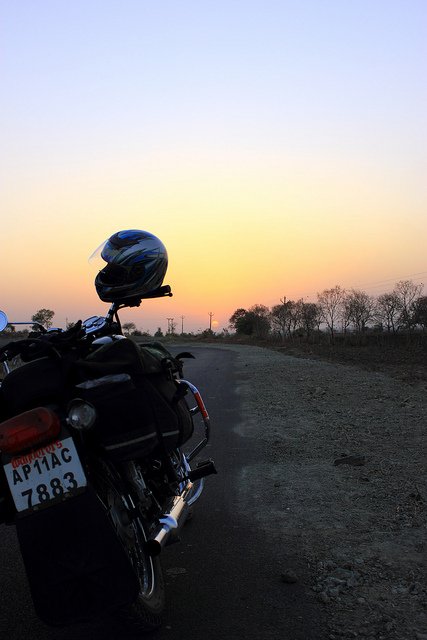 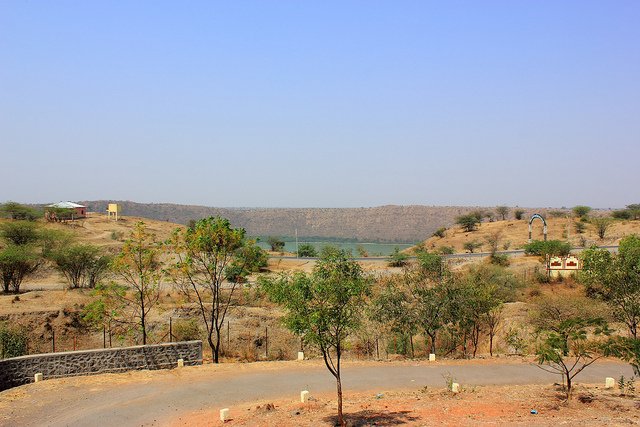 I like all pics, especially your lady in sunset..

Do add some more :)
You must log in or register to reply here.