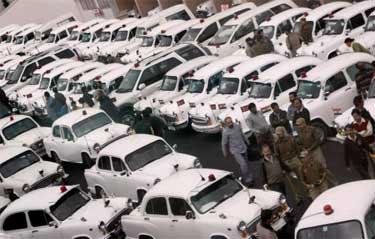 Economictimes
Hindustan Motors, the CK Birla group-owned maker of the Ambassador, said on Tuesday that the company will appoint a new CEO to oversee the operations of the company

Moloy Choudhary, Executive VP of Hindustan Motors said, "The company will not require any money from the Board for Industrial and Financial Reconstruction and can sustain cash operations." On Monday the company said it will report to BIFR as its net worth has eroded by 50% from the peak in the preceding four years.

Hindustan Motors chairman CK Birla told ET that the financial performance of the company will not affect the production of the Ambassador.

“Our net worth has been eroded by 50% and we now have to report to BIFR. There is a significant difference between this and becoming a BIFR case,” Birla said. “We have no plans of phasing out the Ambassador . In fact, demand has been good and we have lined up a lot of plans for the company ,” he added. BIFR is a government agency that helps to expedite either the revival or the closure of sick industrial companies.

Accumulated losses at the end of 31 March 2010 has resulted in an erosion of more than 50% of the company’s net worth from the peak during the preceding four years, the company said in a communication to the National Stock Exchange. This makes it mandatory for the company to report to BIFR as such cases are considered to be “potentially sick” under the norms. The board has also accepted the resignation of managing director Ravi Santhanam .

Hindustan Motors has been losing marketshare in the last two decades, first to state-owned Maruti and then to a slew of foreign manufacturers that brought unprecedented diversity, choice and affordability to car owners following the economic reforms of the early 1990s.
Click to expand...

Well but still don think they can shine again!! The good old days of Amby's are over!
You must log in or register to reply here.