Again, sorry if there are any grammatical, spelling or any other mistake is in this review.

​
Tt eSports, a company or "division" of well-known company Thermal Take makes gaming products for PC. The gaming mouse, headsets, keyboard and anything else that the company makes is not directly available in India, and only place where I was able to find its products was FlipKart. The website said it will take 20 days to deliver, but it was delivered in just 4 days! This keyboard has changable keys, 256 color RGB backlit and a removable braided USB cable. There are also 2 USB ports, a mic & headphone port and a removable fan, which are very interesting too!

​
My budget was 4k, which I stretched by .5k to get this keyboard. I was really confused while purchasing this keyboard, and here are the keyboard which were also in my sight:
Logitech G15: 4100/- This is a really good keyboard, but I dont like its design, and think that LCD is completely useless. In addition to this, the size of keyboard was more than that of my table, so this got out of list.
Razer Lycosa: 3700/- Really great design but no changable backlit and lack of other features like macro keys got this also out of my list.
Logitech G110: 3575/- This keyboard is closest competitor with Tt eSports Challenger Ultimate according to me. Nice design, size was less than that of my table too! Also had Red-Blue backlit and macro keys so it was really difficult to take the decision, but I chose Challenger Ultimate over this because it has full RGB backlit with great design! :P

​
This keyboard was packed in a very nice way, with everything like cable or fan in a proper "pocket" of box. 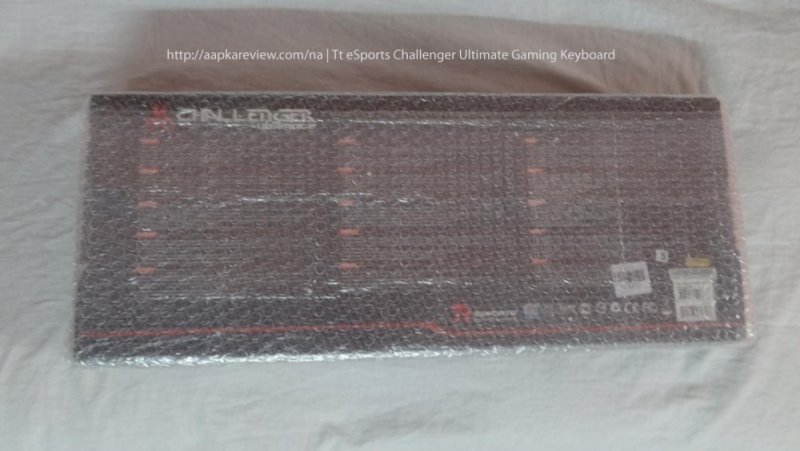 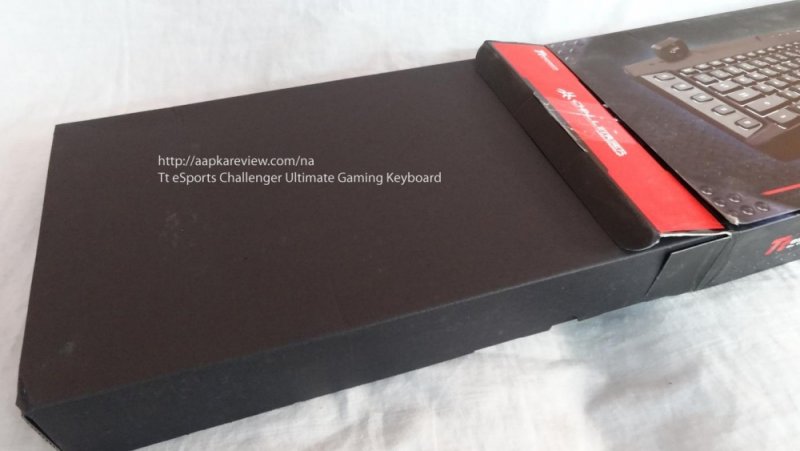 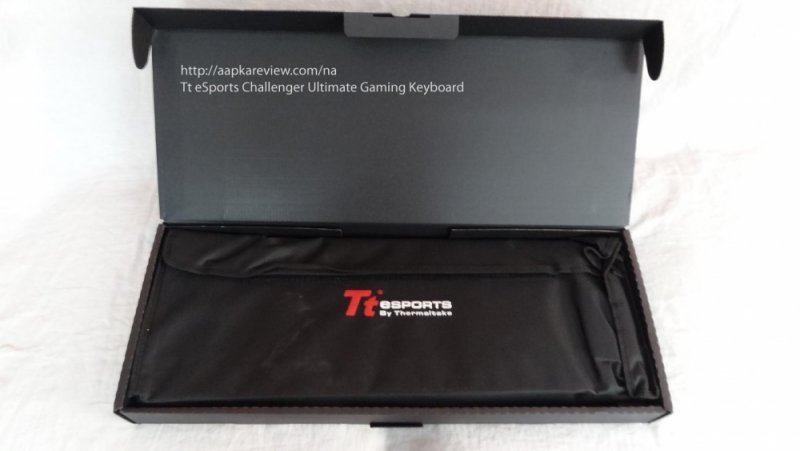 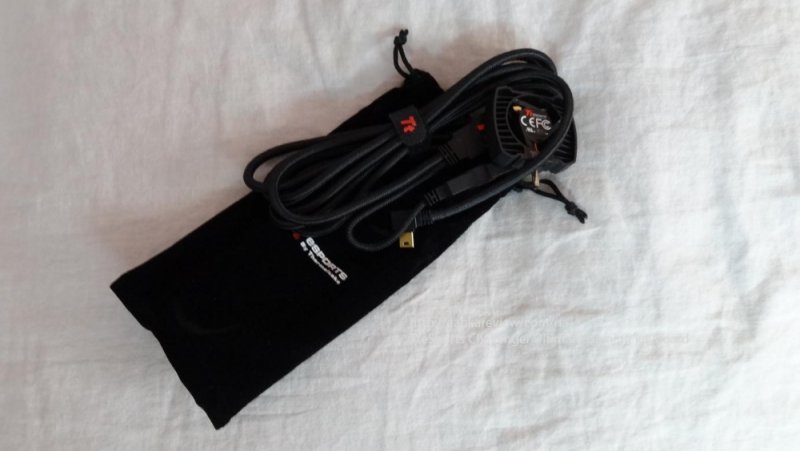 The keyboard was packed in a bag and this can be used if you need to take the keyboard to your friends house. This bag is really nice and has velcro on its top to keep it closed.

​
On taking the keyboard out of the box, it looked like a piece of art! I decided to wait no longer and plug it in to check how it performs on my PC. I turned my PC on, inserted the first USB cable but nothing happened until second was inserted too. Everything was going nice and typing from this keyboard was also better than my previous MK200. After about 10 minutes, suddenly the back-light went off and no key press was detected! About 15 seconds later it looked like windows redetected it and it started to work fine. After another 2 minutes the same happened and I was really afraid that I got a defected keyboard. I decided to restart my PC to check if something changes but that didn't help too. After this happened 2-3 times more, I thought that maybe its because I have not installed the drivers. But even after installing drivers from disk nothing changed. I was really disappointed by this and asked for a replacement from flipkart. Flipkart said that they require about 48 hours to check if they can get a replacement or not. I turned the PC off and forgot about it because of studies. After about a week on a Saturday I decided to check one more time and after turning my PC on, the backlight remained there for first 15 minutes. After this, I decided to leave PC idle to check if the problem is going to return. Even after observing it for an hour, the backlight didn't went off and I was really happy that it started to work.
The problem was solved then, and even after about 2-3 weeks I have not seen that problem again!

​
Ok, the keyboard started to work fine, typing and gaming using this was a pleasure too but after gaming for a few hours I decided to change the backlit. I started the driver software and it looked like it will take forever to start! This actually happens everytime you start the software as it reads data from keyboard's internal memory. 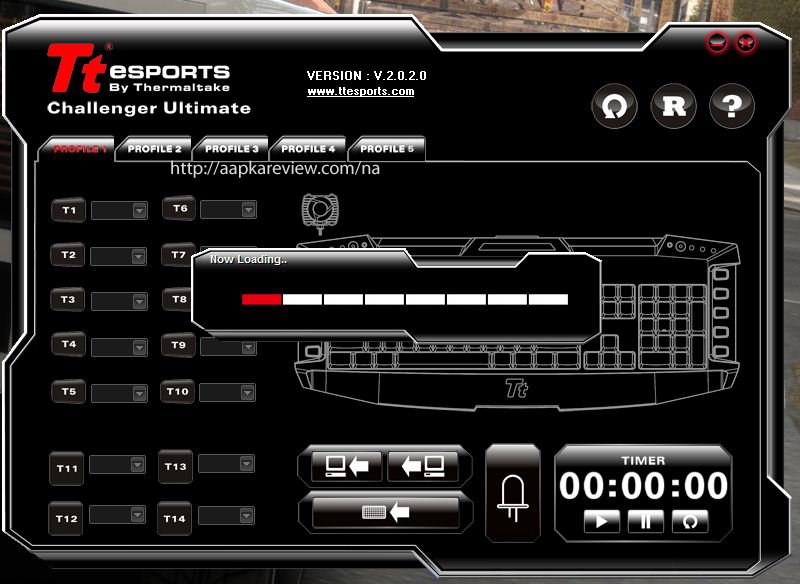 After about 5 minutes of waiting, the driver started and there was a button which looked like an LED. I clicked on it and I was right- it changed the backlit. Changing the backlit was easy but as soon as I closed the LED window, the backlit changed back to red. This was very weird, so I decided to look on net if newer version of driver was available. But no, I was having the latest version of the driver software. I was also unable to find the help for this, even internet didn't help :s. After some random clicks, profile changes etc I figured out that I need to save it to profile after closing the LED window. This was very confusing as as soon as you close the LED window, the backlit changes to red, which made me think that it will save red to profile, but I was wrong. It saved the one which was selected on LED window. Another problem solved, but I didn't like how I was unable to get any help with it!
Another thing which I hate about the driver is that if software is running, you cannot switch profile or change backlit level using buttons on keyboard. :(

​
The USB ports function as they are supposed to do. They can support any device which will use less than 100ma from the USB ports, so I guess HDD cannot be connected to them, but I have not checked.
The onboard headphone jack confuses the windows many times, and its very difficult to tell windows that it needs to use headphones on keyboard, not the speakers on mobo. I am unable to find a way to tell windows to use the headphone jack on keyboard and not on mobo, windows automatically selects which one to use according to its own wish :s

​
The keys of this keyboard are very smooth and this makes typing easy. But, if you start to type a little faster, then the noise coming from keys(especially spacebar) increases, which isn't a disturbance actually but gets irritating many times.. Programming keys is easier than changing the backlit. The programmed keys work fine too. 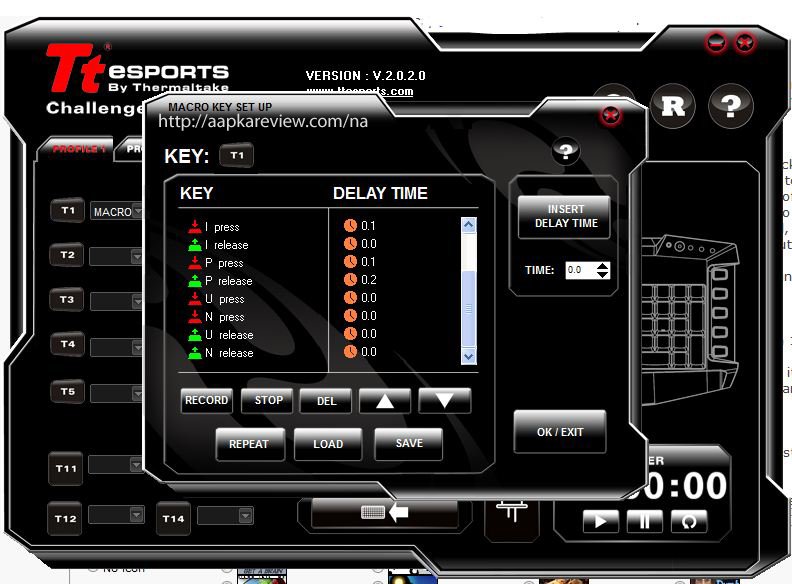 The multimedia keys like NEXT, PREVIOUS, PLAY/PAUSE & STOP work perfectly. The onboard profile switch is also nice And you can change backlit intensity from another button which also works fine. BUT, the two keys-volume up & down- work only with the headphone connected on the keyboard, not with windows directly. So, you cannot use this button to reduce sounds coming from speaker attached to motherboard..:( 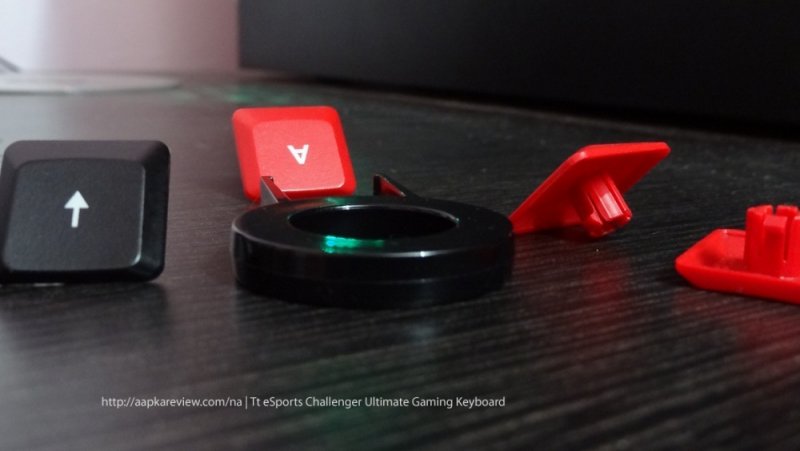 The so called hand cooling fan doesn't cool the hand very effectively. You get some cool air when you place your hand on F1, F2 & F3 though! The fan is removable too and there is a "cap" to cover the fan port & protect it from dust. There is a small slot in keyboard in which you can keep the fan if its not being used.. Other lights indicating Num Lock, Caps Lock etc are on top of the keyboard, and there is also a light which indicates which profile is selected with 5 colors: RED, GREEN, BLUE, PINK & YELLOW. These colors change when you switch the profile using the profile switch button on keyboard.The backlit on the "Tt" logo can not be changed, but it can be turned off.

Another thing that I dont like about the keyboard is its size. Many reviews said that table might collide with fan, but thats not the case with me, the width of "place for keyboard" is a cm smaller than this keyboard, and its makes very diffcult to fit the keyboard in. But luckily I can remove the cable and reconnect it whenever I want to use it... :p

Now I don't think I have missed anything about the keyboard in this review, and if I did, please let me know so that I can edit it.

CONS
-Horrible driver!(but if someone needs help with this he can PM me.)
-Fan is very much useless!
-Headphone port/onboard audio confuses windows..
-The volume control/music control keys work only for headphones connected to keyboard.

Conclusion: The keyboard has really nice looks, great features but confusion created by sound card to windows is really disappointing. If volume keys are useless for you and if you are ready to mess with control panel to enable headphones on keyboard then this keyboard is great for you; otherwise G110 is also great, has working soundboard which doesn't confuse windows but lacks RGB backlit. :D 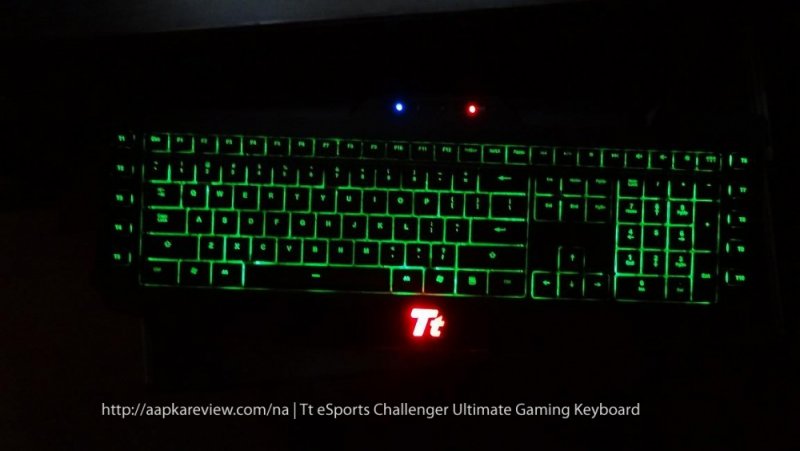 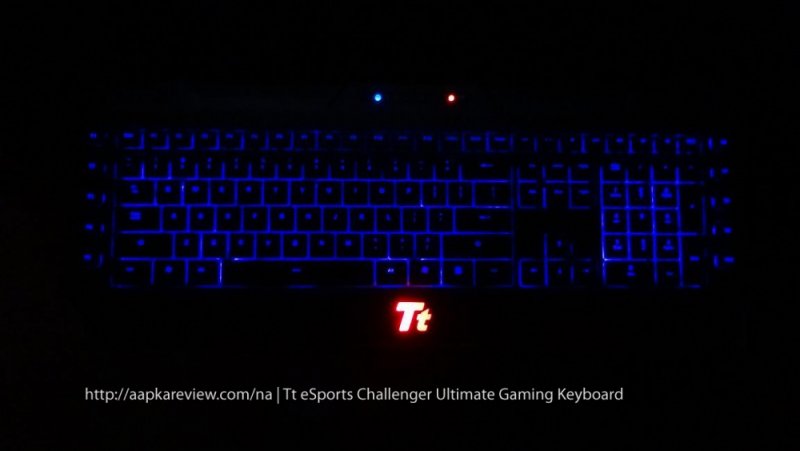 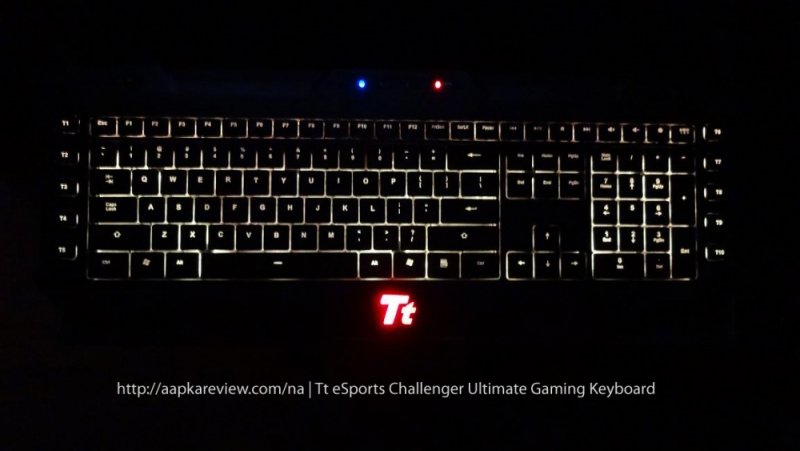 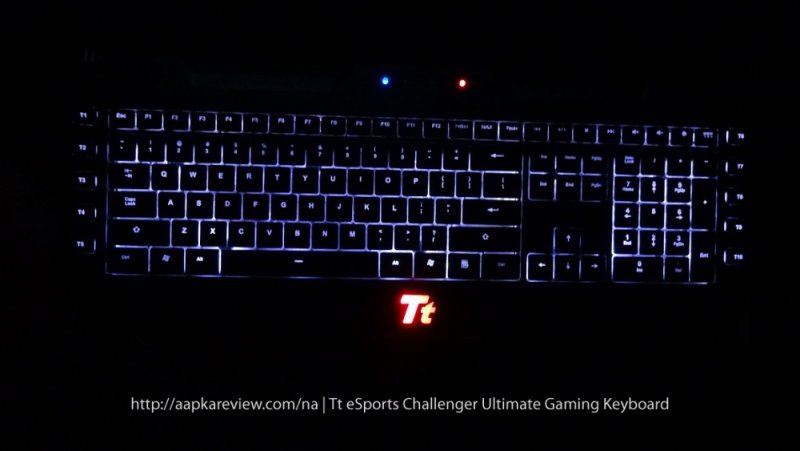 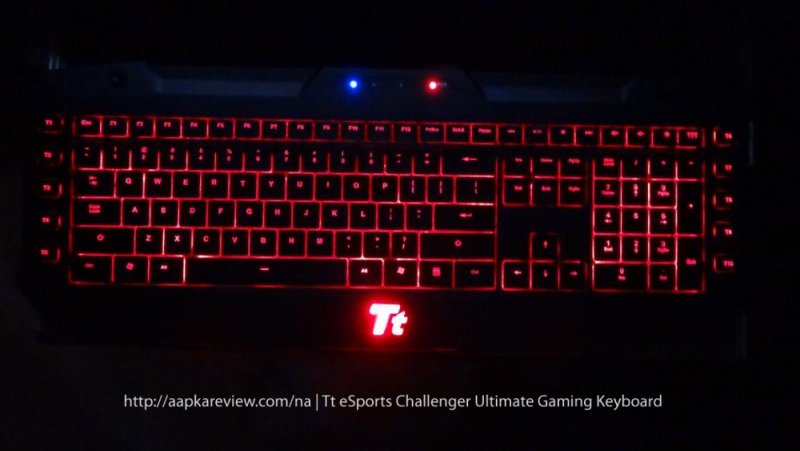 Never heard of this, on the outside this looks more or less like a normal keyboard

What exactly is a soundboard in a keyboard?

how this keyboard is useful?

sethumurugan said:
how this keyboard is useful?
Click to expand...
Everything in original thread may seem stupid, but its just like BMW vs Swift. Both have air-conditioner, both can take you from A to B, both have music player, so how is a BMW more useful?

Back-light, macro-keys etc are just like bells & whistles in such a car. :P