French car maker Renault today said it is developing a car which will be designed to meet the requirements of the Indian market and is expected to be introduced after 2013. "At present, we are at the conceptualisation stage for a car which would meet the requirements of the Indian market," Renault India Chief Executive Officer Sudhir Rao told PTI on the sidelines of the Society of Indian Automobile Manufacturers (SIAM) summit here.

He, however, declined to give details on the segment the car will fit in saying, "It is too premature to say anything right now, but we are are very flexible on that." The car is being developed with an intention to be exported to other markets like India. "We have a global approach. While the conceptualisation and development will be done in India, we and the car will also be be exported to markets similar to India," Rao said. He said the car is over and above the five models the company had announced to launch by 2013. Renault plans to introduce five cars in the country between 2011-2013, including a small car. The company might share the platform of its partner Nissan to launch the small car in 2012.

"We have decided to introduce five cars in the two-year period between mid 2011 to mid 2013. It will start with our sedan--Fluence, by next year," Renault India Country General Manager Marc Nassif told reporters at the After the Fluence the company will introduce its SUV Koleos in the same year. When asked about its proposed small car, he said, "We will introduce the hatchback in the most competitive B segment and it will be rolled out in 2012...We may share a Nissan platform for launching the small car." The company is investing Rs 4,500 crore with its partner Nissan to set up a plant in Chennai having a capacity of up to 4 lakh units per annum. Renault had introduced its sedan Logan in joint venture with Mahindra & Mahindra, but the JV was snapped the in April this year. The French carmaker, however, allowed M&M to continue producing and selling Logan under a contract manufacturing agreement. Source: Economic Times

Another prospect in Chennai!

BTW am having high expectations on Fluence.

I heard that Renault will be launching a small car first. By small car i mean a hatch(A2 segment).
A

A2 segment will be the Clio, isnt it?
A

Modus could be Renault's new small car for India

the word out is that renault's new small car for india could be the new modus, set to be launched at the frankfurt motor show later this year.

Re: Renault to launch India specific car in 2013

Yesterday Renault unveiled about their plans of releasing a smaller Sub-Rs.4 Lakh Hatchback in India as part of their global strategy. What it could be? Any Guesses? (http://www.theautomotiveindia.com/f...atchback-renault-india.html?highlight=renault)

Re: Renault To Launch Sub-4 Lakh India Specific Car in 2013

French carmaker Renault is constructing a small car from ground up to take on the likes of Maruti Suzuki's Alto, Hyundai India's Eon and Chevrolet's Spark, in the segment that makes up for about 40-45% of India's car market.

Work has begun on the car codenamed "A Entry" under the leadership of Gerard Detourbet, Renault's low-cost car specialist. The car will be powered by an 800cc engine.

ET learns that Renault has started working on the smallest engine yet in its global portfolio codenamed B4A, which is likely to deliver a mileage of over 20 km a litre. The entry-level car segment in India ranges in the price bracket of Rs 1.5 lakh to Rs 4 lakh.

Three persons close to the development told ET that the small car is likely to be rolled out from the Renault Nissan Alliance plant in Chennai. The new car may hit the market in 2014-15.

The 'A Entry' car is a global product and is being developed keeping emerging markets in mind, a source said.

"The internal target is to get the ARAI rating of 24-26 km per litre, with the car delivering at least 20 km per litre in city driving conditions," said one of the persons who confirmed the development.
DETOURBET TO SPEARHEAD PROJECT

Renault India spokesperson Rajiv Mitra told ET: "We might look at a car below the Pulse in future."

About specific queries on the timeframe, engine specs, these are all speculations at this point of time. As a company policy we don't comment on speculation by the media."

Renault had appointed Detourbet, who had in the past delivered on cost, quality and reliability with the Logan, to spearhead this project in November last year. After a series of studies, the French carmaker has decided to begin work. The key development is currently underway at the Renault Nissan Technology & Business Centre India in Chennai.

A person close to the development said the thought process of developing a small car for India began way back in 2006, when Renault got the first taste of the Indian market with the Logan. It realised that to make it big in the Indian market, the small car platform was absolutely critical.

"The European small car, Clio, would have been very expensive; so Renault knew the company will have to develop an entry-level car platform for the emerging markets led from India," the person said.

At the height of the economic meltdown in 2008, when projects and investments were put on hold, the two key projects that continued were the 'A Entry' and Electric Car platform.

For about a year or so, Renault relied on Bajaj for an entry-level car, but soon realised the need to develop an entry-level platform on its own for the emerging markets, irrespective of the development of the ultra low-cost car at Bajaj.

Renault constructing 800cc small car to take on Maruti, Hyundai and others - The Economic Times
T

Can anyone throw some information on Renault's new car to be launched in India by 2015 or so? The project, as I understand, is X2
V

Reanualt's entry level car begins testing in India. The A-Entry will be the least priced Renault car in India, and will sit below the Pulse hatchback in terms of positioning. 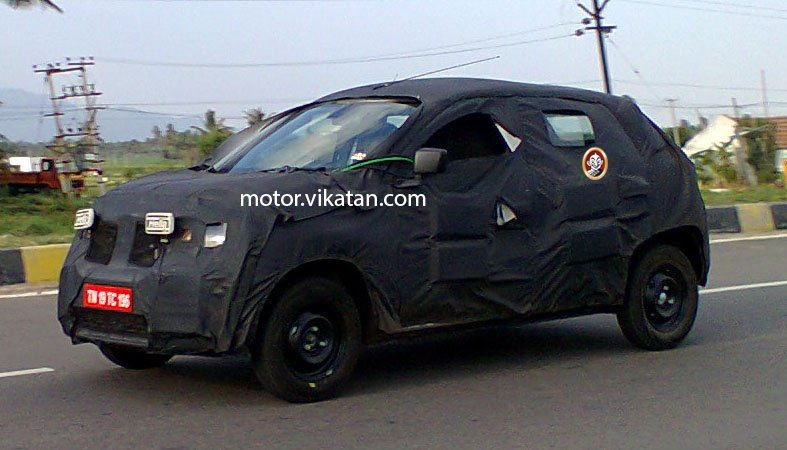 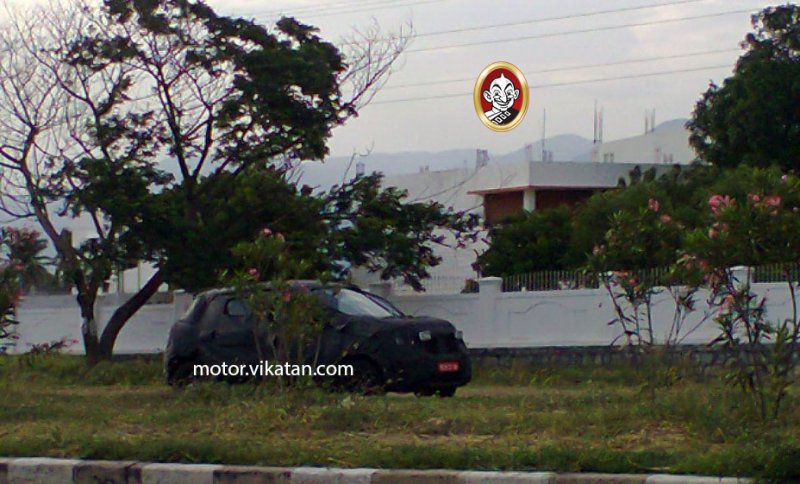 Renault India’s first product on the Common Module Family (CMF) architecture will be the A-Entry/XBA entry-level budget hatchback. Underpinned on the CMF-A (meant for budget hatchbacks) architecture, the Renault A-Entry/XBA will feature an 800 cc, triple cylinder petrol engine developed by Renault-Nissan technical center at Chennai. A diesel engine isn’t on the scheme of things as the segment that the A-Entry will operate in, is petrol-only territory.

At a sub-4 lakh rupee price tag, the A-Entry could well turn out to be the next big blockbuster for the French automaker’s Indian operation.Renault India has developed the A-Entry/XBA as a global car.
Large scale exports of the A-Entry are a distinct possibility. Emerging markets around the world are likely to be the targeted markets for the new, budget hatchback from Renault.

With the shots given here the car looks pretty big to compete with alto and nano from renault.
P

Renault.. Rejuvenate Logan please. That was a run away success.

I guess its not a re-engineered version of Go.
R

I was also thinking its similar to datsun go
V


All-new twin-cam 800cc engine will be seen first in the upcoming Renault XBA hatch; will come with AMT gearbox as well.

Renault will clearly be watching the customer’s response to the K10 AMT over the coming months. Additionally, future engine options could include a more powerful 1.0-litre petrol motor (codename: BR10).

The option of a diesel engine has been ruled out for two reasons. Firstly, the engine bay is designed to accommodate just the BR series of small motors. And secondly, while a three-cylinder diesel motor was in the pipeline, Renault has shelved the plans as future regulations could lead to diesel losing its cost advantage.

The low-cost XBA hatchback is expected to be priced at around Rs 3 lakh, and should be in showrooms by mid-2015.
Click to expand...
Source:ACI
You must log in or register to reply here.