I just thought that many people have not seen what Rallying was like back in the days, when it was all brawn and skills. There were no high tech stuff like Electronics, Fuel injection,Traction control, Paddle shift and even AWD. I will post the link of some videos for you all to see and share the experience.
Last edited: Oct 21, 2010

This is the RAC Rally 1977, which was held in Britain.

Car no. 7 in the video is a Lancia Stratos and though it looks like a spaceship even now, it had no High Tech equipment.

These are the specs of the Stratos:-

This is another video of the Rally Sanremo 1981 WRC
http://www.youtube.com/watch?v=HgaXIkOnlVQ&feature=related
Last edited: Oct 21, 2010

Excellent thread Jalex. Rallying in those days must have been difficult and much more exciting as compared to todays when the cars have got so much of electronics under the hood for various controls.
Why not share some pics of your rally events. You have been in motorsports i believe,

Akash said:
Excellent thread Jalex. Rallying in those days must have been difficult and much more exciting as compared to todays when the cars have got so much of electronics under the hood for various controls.
Why not share some pics of your rally events. You have been in motorsports i believe,
Click to expand...
Unfortunately I dont have any of them other than the damaged ones I've posted here: http://www.theautomotiveindia.com/f...eriences-amateur-motorsports-2.html#post40474
We did not have digital photography as well back then. All the pics I had were photos and negatives and they all have gone bust with the weather.

Oh. Thats sad. BTW i have already gone through that thread. Needless to say it was a joyful experience.

Akash said:
Oh. Thats sad. BTW i have already gone through that thread. Needless to say it was a joyful experience.
Click to expand...
I still haven't finished it yet though.

And here is a video of the 1985 Kenyan Safari Rally and the cars you see are GROUP B Monsters,much more powerful then today's WRC cars. Sadly they were banned after some serious accidents and were considered too powerful to be used at all.
An interesting note is that the Nissan you see between 3.03 and 3.10 is none other then the famous Kenyan Indian Shekhar Mehta.

You can learn more about him here: http://en.wikipedia.org/wiki/Shekhar_Mehta

Excellent thread Jalex , voted 5 stars! Videos are great though still i have not seen all of them.


Yeah i agree rallying would have been so much tougher those days without Traction control , ESP , ABS and so much other stuffs.

Awesome.
Great to see somebody with a keen interest in rallying. everybody nowadays shifts to F1. Rallying is the sport which requires Balls.
Stratos. Legendary.
To put more of it in Perpective.
The lancia Delta.
Toyota Celica GT4.
Toyota Corolla.
Ford Escort RS.
Last edited: Oct 21, 2010

Thats the Lancia Delta and the Toyota Celica GT4.

Heres some info about the group b rally cars. 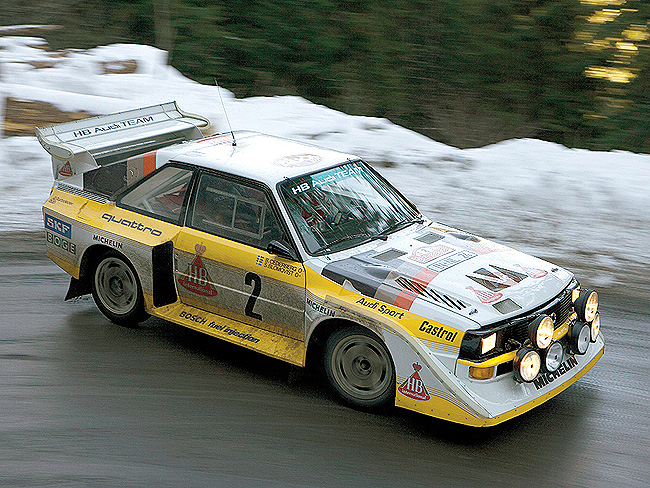 Came in as the first AWD rally car and took the world by storm. nobody could match its pace. An equally wild engine.
The 2133 c.c. all-alloy 5-cylinder unit had 4-valve head plus a big turbocharger. Maximum power in race car reached 500 bhp, while the road car still managed to put out 300 bhp. 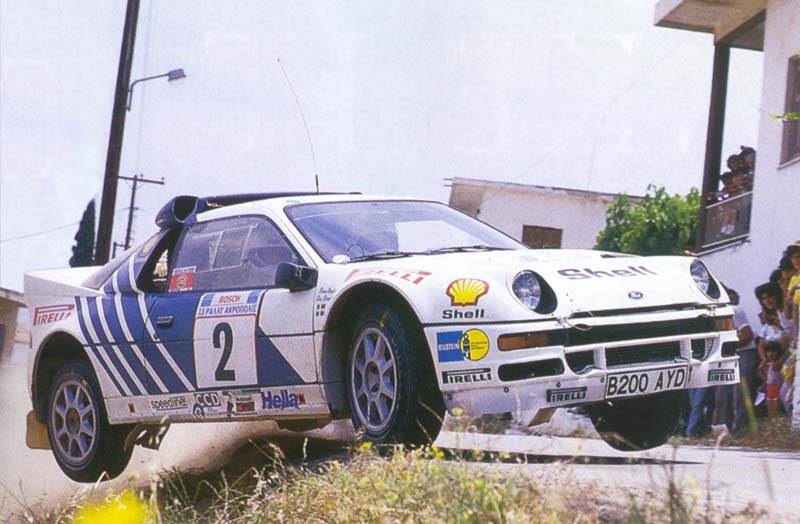 In terms of technology involved, it was quite advanced - spaceframe chassis, mid-mounted engine, Kelvar body for race car or honeycomb-structured glass-fibre body panels for the road car, 4-wheel drive, twin absorbers in each corner.
The engine was a 1.8-litre 16V turbocharged four-cylinder, made 250 bhp in road trim, but suffered a huge turbo lag due to the high inertia turbo attached for more power. Not very successful. 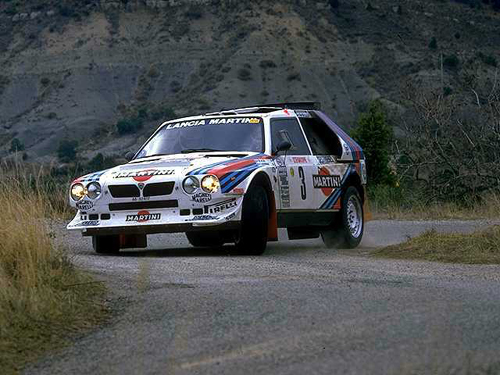 the Delta was built for only one and one purpose only. Beating the Audi and peugeot. And it would have done it if it wasn't for fate.
Mid-engined layout.The engine was longitudinally mounted behind the front seats, directly driving the viscous-coupling LSD which transfered 30% torque to front wheels and 70% to the rear. Space frame chassis.
Engine was another Marvel. 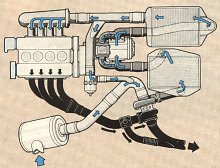 It used a Turbocharger and a Supercharger simultaneously!!
Turbocharger is generally regarded as the most efficient means of forced induction, but it requires higher revs (hence a lot of exhaust gas) to operate. The result is poor low-speed power and the presense of turbo lag. On the contrary, supercharger performs strongly and instantly right from idle, but it is rahter inefficient in high rpm. For a rally car, a flat torque curve over a wide range of rpm is always very crucial, since rally car has to brake to very slow in tight corners and then accelerate to near top speed in 10 seconds. Therefore Lancia spent a lot money with Abarth to develop a system combining both turbocharger and supercharger to get a perfect output. It employed twin intercoolers, one for the turbo and one for the supercharger. The supercharger worked at low speed. Once the turbo cut in, a bypass valve relieved the pressure from the supercharger so that energy efficiency was be lifted.
This system was not only complex, but also faced great difficulties during development. The biggest problem was the transition between supercharging and turbocharging, since a short zero-boost period existed. However, after further developement, this problem was eventually solved.
As a result, the 1.8-litre engine of the rally car had at least 470 bhp on tap. 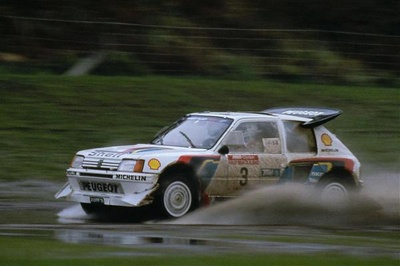 Peugeot 205 T16 represented a new generation of Group B cars which could eat the old generation (headed by Audi Quattro Sport) for breakfast. While Quattro Sport was still front-engined, with a heavy monocoque chassis, Peugeot redefined the rules as mid-engined with a space frame chassis.
The 1.8-litre 16 valves turbocharged four generated up to 440 hp in race form, and had a unique center differential which enable on-board selection of different torque slit ratio between front and rear axle.

The Quattro was one of my favorites, The AWD really kicked other WRC cars where it hurt most. And a French driver Michèle Mouton started to appear on the podium with the Quattro. She proved that WRC is not just a man's sport. That's Michèle Mouton in an Audi Quattro S1 in 2007. I'm not sure whether that was in Germany or is from the 2006 Goodwood Festival of Speed.

The first picture is from the Goodwood festival of speed 2006 held in the grounds of Goodwood House, West Sussex, United Kingdom and the second and third are from the 2007 Rallye Deutschland in Germany.

racerdabba said:
Awesome.
Great to see somebody with a keen interest in rallying. everybody nowadays shifts to F1. Rallying is the sport which requires Balls.
.
Click to expand...
I stopped watching F 1 after they brought in the stupid regulations and Michael Schumacher started becoming the sure shot winner at every race. Where's the fun when you already know who is going to win? F 1 is way too boring for me. And very nice to see someone else who is a Rally fan.

Great to know that you are an rally enthusiast Jalex!

I thought many people forgot WRC and shifted to F1, Thanks atleast few still remember.

But when you get a chance, check out todays F1 race, its not the same way it used to be when Schumi was there. Its totally different this season & you will be enthralled :)

Debayan thanks for that information on the Delta!