Puma M26 is a Mine and Blast Protected Vehicle

Had the opportunity to have a little TD of the Puma M26 couple of days back.

Based on a Tata 407 4X4 chassis, the end result is nothing like i've seen before.
The only tell tale signs are the tata dashboard/steering wheel/seats/pedals & gear levers

First off from the outside the puma looks every bit of a menacing ugly beast with angular lines & monstrous proportions. From no angle would you call this looking good but then its built for a purpose & hopefully it does that well (no chance of proving itself though, thankfully)

The tyres were truck sized Michelins, having atleast a foot clearance from the fenders, with the doors located atleast 6 feet off the ground & one requiring to perform some acrobatics to open the door handles & then getting oneself inside the vehicle by means of 2 piddly foot rests placed oddly & some grab bars. Since the doors are so heavy they are attached to pneumatic struts to swing them open but one needs all his/her strength to then manage to close the doors. The door sills are like a meter high & yet again one has to like 'jump through hoops' to go over them & land inside the vehicle without banging your head on the roof

Tall people will have a nightmare! Luckily the foot wells are deeply recessed, otherwise it would a catastrophy to sit normally inside this vehicle! Seats are plain average bucket seats, mildly changed from the original tata ones provided. The Steering wheel is angled oddly with one having to hold like almost horizontally, it sure felt weird
Front Windshield is Compartmentalised into 2 pieces one for driver & the other for co-driver & are really small, with one barely getting a view out of them to see where one is going & no idea of what is below or next to this vehicle. Starting the vehicle was typical tata fare, nothing interesting. Luckily the vehicle had airconditioning with cool air blowing out of 2 huge boxes having vents on top of them, placed behind the driver & co-driver's seats, else one can get baked alive in this vehicle! The rear portion of the vehicle had some seats & tons of equipment all spread around in sealed plastic bags. The Roof top in the centre had a circular duct opening presumably for a gunner to do his job with bracketing in place outside for attaching the big gun

The Gear box was really hard to operate, especially slotting into gear & its difficult to concentrate keeping an eye on the shift on one hand & try to get some judgement from the poor view afforded from the tiny windscreen, wonder how the driver would be able to do so in a war like situation Adding to this confusion, reversing this vehicle with absolutely no view is a massive undertaking in itself. The wing mirrors provided are too small for the job at hand

At the end of it, as long as its good for the intended purpose, everything else is secondary!

Will put up some pics shortly!

Mine & Blast protected vehicle, how did you get chance to see it?

As usual, Denom is back with another test drive review of a not-so-ordinary ride. I think I know the secret.

Now, don’t make us wait too long for the pictures of this monster. And yes, It indeed looks boxy and somewhat hideous. 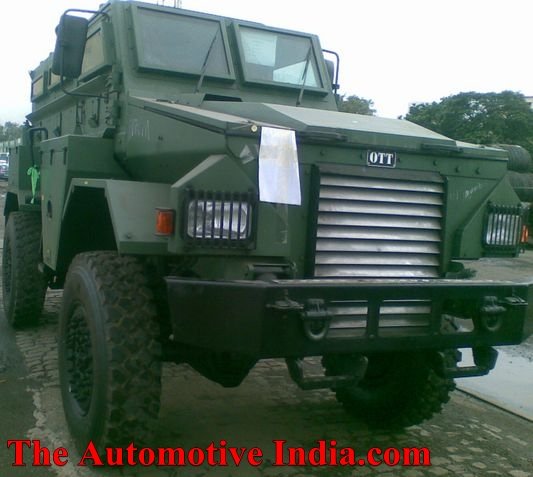 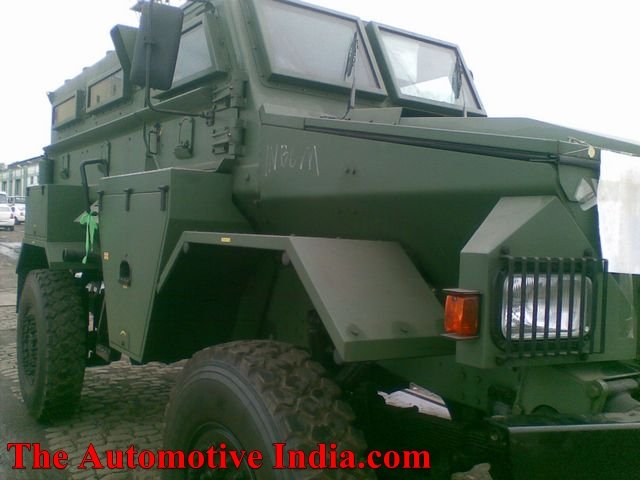 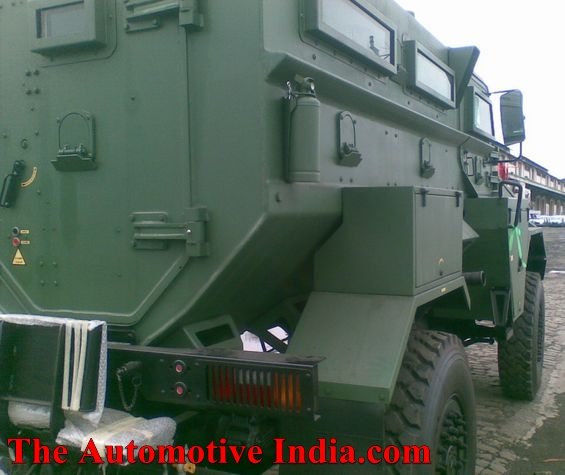 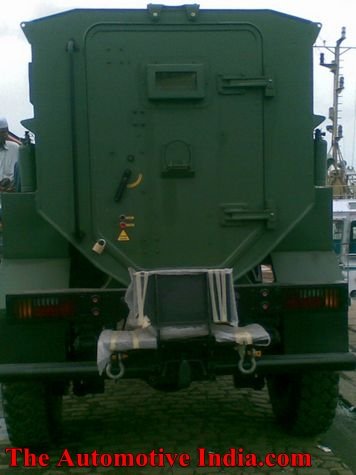 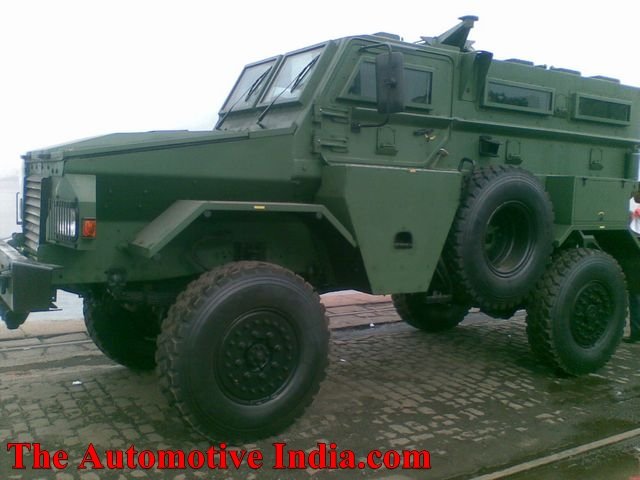 6000cc turbo diesel, 145 hp @2500rpm, 6 speed, 500 nm torque @ 1500rpm, can seat 11 and a weight of 7 tonnes. I guess it is much bigger than M&M Axe. And most probably it'd be for pure off-road use, or use during violence or emergency and of-course strictly by Indian Army.
But why it is sold in South Africa and no badge of Tata or even no mention of this beast in India?

Crazy cat said:
But why it is sold in South Africa and no badge of Tata or even no mention of this beast in India?
Click to expand...
CC,

Would you like it to be sold through normal dealerships through out india???

Its manufactured by a company called OTT in South Africa, Tata chassis sent there & returned back in this fashion BTW, It will be on display in delhi during INDESEC, New Delhi, India from 6 – 8 September.
Our Delhi mates can check it out there

nice pic,
i cant imagine how you climb up?

Denom said:
At the end of it, as long as its good for the intended purpose, everything else is secondary!

Click to expand...
But, what is the intended purpose this vehicle

i wonder why the doors were designed like this...

are you sure this is based on a tata chassis? the website says this is built by a south african company.
Last edited: Aug 27, 2010

raj_5004 said:
i wonder why the doors were designed like this...

are you sure this is based on a tata chassis? the website says this is built by a south african company.
Click to expand...
Yup, Tata 407 4X4 Chassis. OTT is the name of the company manufacturing these vehicles in south africa. Don't forget the purpose of the vehicle, specially designed for armed forces. Doors, et all must be designed with specific purpose/requirement.
-----------Next Post-----------

Shynish M said:
But, what is the intended purpose this vehicle

Check it here Puma
Click to expand...
LOL, purpose of the vehicle is in the TITLE of the thread itself!!!

wanted to put up the link myself but somehow it did not appear. Thanks for doing the needful.
Last edited: Aug 28, 2010

Wow i wonder how you got a chance to TD such vehicles!


I cant even imagine a tall guy like me entering inside!