Since I never had much experience of driving cars(except driving a OMNI which we had previously) I had a very clear idea that I am going to buy a cheap car with low maintenance and easy service availability which would cost efficient yet trustworthy. No doubt, Maruti Suzuki Cars was the choice that clicked me. I had heard of Tata Cars, but many confirmed me that second hand Tata cars had some issues with the engine especially the diesel ones.
So simple as it may sounds never ever go for a high end car if you are very novice to cars and are buying the car to just to learn it. Stick with your requirement once you finalize it, whatever offers you may get later.
Once I had finalized it I started my search on the internet as well as on the maruti service centers around Navi Mumbai.

I would like to make a special mention of carnation, because in their showroom they showed me some really nice cars with their check process before delivering the car. Also they have a 1 year warranty for the cars sold.

Pre-Owned Cars is a gamble majority of the times. But with our foresight I think we can filter out the wrong cars.To help with this I had already befriended a mechanic from Maruti Service Center. He helped me with his 3rd person neutral views on any of the cars that I showed him.I had shortlisted 5 cars which this person visited personally and conducted a thorough testing based on his experience of 17 years with Cars and specially Maruti Cars.

But I decided to buy it for some simple reasons :
1. The preexisting issues with the car were trivial.
2. It had a branded LPG kit fitted with green taxes paid.
3. It belonged to my friend's brother who vouched for the car.
4. The engine was declared as "pass" by my mechanic friend Ratan.
5. I just loved the car and the cost was nice (65K all inclusive)!! ;)

This link would help you with commonplace experience while buying a car :

You guys can check my article written on another website for buying bikes :

Here are my 2 cents on buying 2nd hand cars :

1. Always have the car reviewed by a mechanic. It helps with a neutral perspective.

In case of LPG/CNG
3. With CNG/LPG on and AC On/OFF
3. Check the AC if it works in all the modes, the heater works and also the defroster.

I have a low screeching sound with AC on which suggest I need to do some work on the AC. You guys can avoid it.

4. The tyres threading. Many a times the tyres are fabricated using a polish and razor blades for extra design which makes us fall for it.

5. If the engine oil is nicely tuned in.You can easily make out a "dirty" engine oil by having it inspected.

6. Make sure the user has used coolant for the car,it water is used, chances are it may have entered the engine previously which results in engine to die out or performance degradation.

7. If the LPG kit is RTO approved,is branded and has the green taxes paid.

8. The user has all the papers in place,(cliche but really important).You may like to check :
1. The original car papers are in place.
2. The insurance papers, self and 3rd party are in place.
3. Any debts on the car are cleared.
4. Any RTO fines/blacklisting if any imposed which is often written on RC in our side.


9. The internal wiring is sound and all the lights including the parking, breaking lights work.

11. You may like to visit the service center where the car was serviced previously so that the history of the car is known and may be you service the car there itself.

12. The stepney tyre is in good condition.Else you have to buy a extra tyre.

4. Review of Car Brought in House

Today while writing this post after 2 months of analyzing the vehicle the following are as follows :

1.There were scratches to the sides which is understandable.

Currently since they are too light,haven't bothered them.

2. The stepney tyre was in much bad shape. I had tough time when I put it on once my tyre punctured. Kindly check this first before buying any second hand car.

I threw away the wornout tyre and replaced it with 2nd hand tyres. I brought 2 second-hand tyres from a local tyre shop for 1600 Rs a pair. Later my puncture guy told me that they had been fabricated by using a razor blade for the extra design. Kindly involve a experienced tyre guy while buying second hand or even new tyres.

3. The brake lights were not working, a absolute must.

I had it fitted from service center. Cost 150 rs including the wiring. I also fitted a strip of LEDs to the top of rear windshield which glows when the brake is pressed. Cost is 150 Rs.


4. There was little water condensation in the headlamps.
Did nothing in it.Planning to clean it or change it.


5. The wipers were arguing a bit while doing their job.


Bend them at a angle after observing the angles at which other wipers are present for other cars.Whoa !! It worked. I always make sure the windshield is lubricated enough with water before using wipers. A newspaper is a nice addon before using wipers. Also have added a small amount of windshield solution available for Maruti Cars 16rs for a sachet in it. Quantity 1:4.

6. The keys were actually worn out by constant use.

Since the rear trunk door required really turning the key hard,the keys were in bad shape.Had duplicate keys done.I use seperate keys for opening the dickey door which requires extra pressure.One of my friends had a hole in his pant when he had to replace the starter kit when the keys refused to fit the starter of the car.

Had it worked upon at Service center.Cost 200 rs [thinking]


8. There was this low murmur and a beating sound when AC was put on.

Tightened the AC belt.Problem not gone but reduced.Cleaned the Air Filter,Gas and also vents.I don't put on AC when I start the Car.I drive it for a kilometer or two with decent speed with all windows down, removes stale, hot Air and maintains a steady fresh air intake. Put blower on mode 2 and then put the AC on after closing all the windows.

9. There was carbon on spark plugs.


The mechanic advised me to burn them in petrol and scratch them with sandpaper. Did that our friend,Varun however advised that I could have replaced those.60 Rs. per piece.I would recommend it to all guys.


10. No coolant present,plain water was filled.

Replaced the water with coolant.HP coolant available at HP petrol pumps for Rs. 150.

12. The hosepipe connected to radiator had small cracks.

Replaced the radiator hose pipe.90rs for a non-genuine piece.

13. The blower holes for Windshield cleaner were clogged a bit due to dust.

Cleaned them safety pins.Now the flow is even and forceful.

14. Doors were not that greased well.

15. There were no car rubber caps on the flooring which allowed water to enter in the car from below.

Still have to replace them.Will do that once rains are over.Current seat covers are OK.

Will be posting the photos of the car,the additions/modifications periodically.

Welcome to TAI buddy and congrat's on your 800, good to have a decade old 800 ownership report please keep updating this thread i am eagerly looking forward for the pictures

Waiting for the pic's of your car..

Please find the first photo of the baby after it was brought home after some repairs.It is very dirty but I am proud of her. 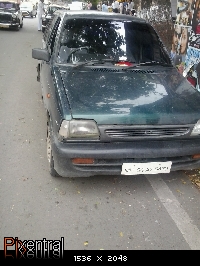 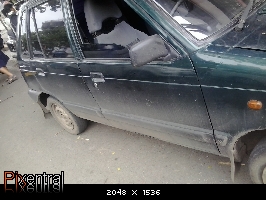 I am unable to find the photo.

Here is a complete guide how to upload photos.
http://www.theautomotiveindia.com/forums/announcements/18-how-add-pictures-videos-posts.html

Unfortunately the page is not opening up in our LAN due to some network issues.Can a gist of the process be copy-pasted here for quick reference ?

My baby when she was brought home.It was all dirty and roughed up on the streets.

The lord in my Car :

Nice to see a 5Speed 800 on the street. i had a 2001 model. had to exchange it because of lack of space in garage.
the model is very good. This has booster assisted brakes and all.
my car returned good FE 28KMPL with AC highways and 22-23 city. after i changed the AC gas to non-cfc, pickup also increased after that
K

whats the FE you get for LPG?
You must log in or register to reply here.