NOTE: Follow this link for The Automotive India's Comprehensive Review of Micra: http://www.theautomotiveindia.com/forums/test-drive-reports/2067-nissan-micra-road-test-review.html 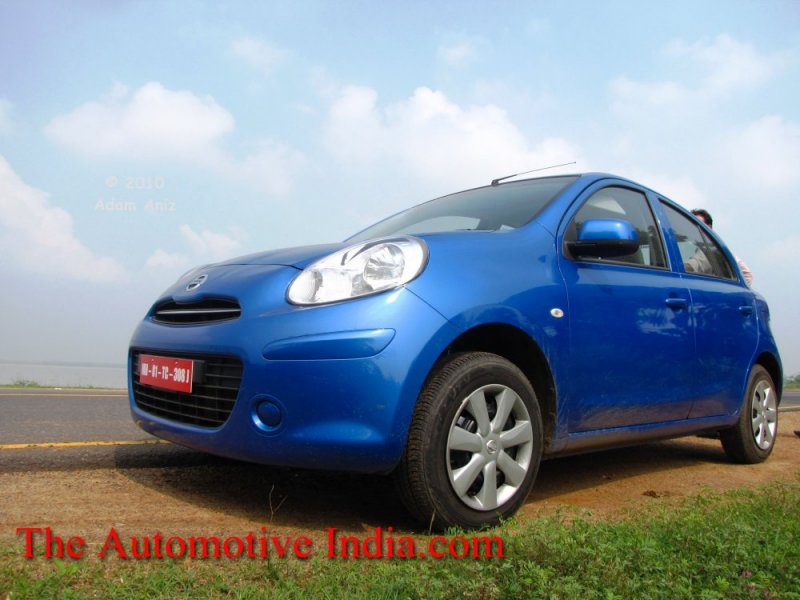 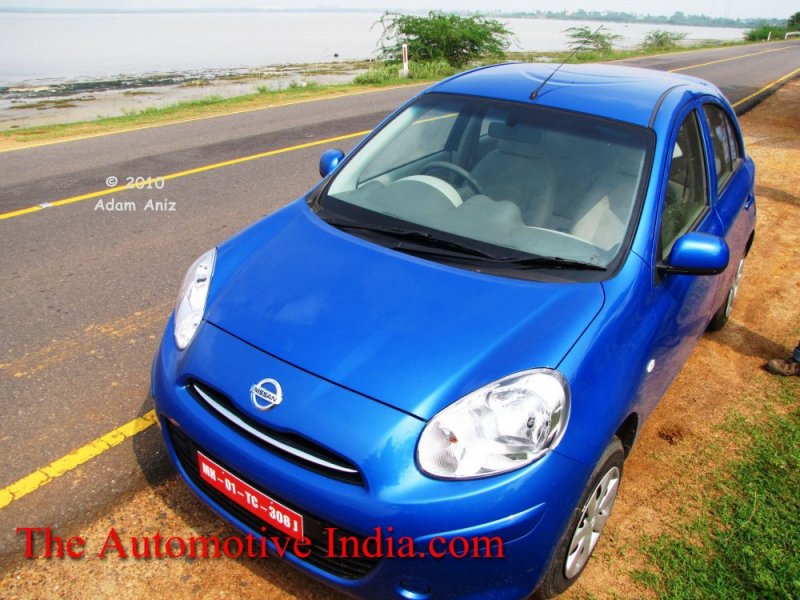 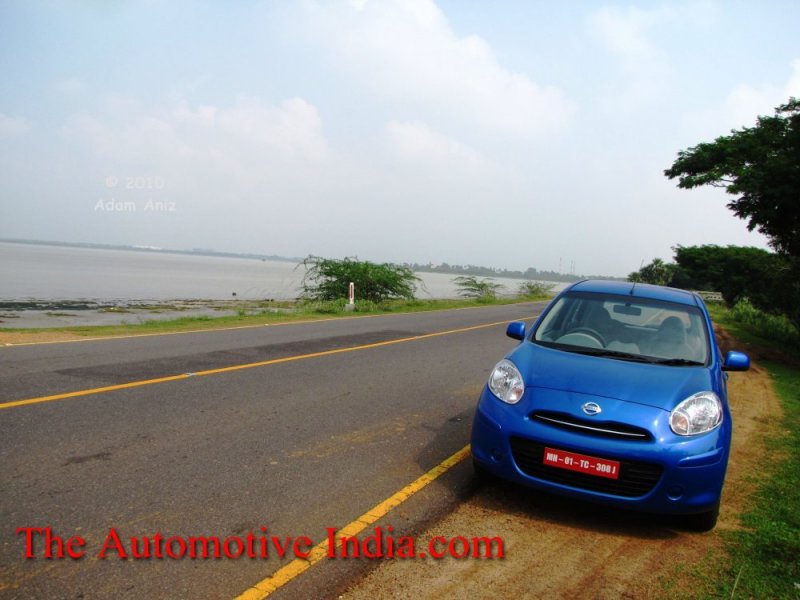 Nissan introduced the Micra hatchback in India earlier this year in August 2010. Although, the car offered most of the significant features at a fairly well price tag, which a typical buyer of this segment would consider, however, what it missed was the availability of a torquey Diesel engine. Now lately, keeping in mind the high customer-demand for a Diesel variant, Nissan has fulfilled that requirement too, which aids to make the Micra one of the comprehensive packages altogether. The Automotive India recently pushed this small hatchback off to its limits to find out whether it really makes worth that excitement or not.

Apparently, there is not much difference to distinguish the Nissan Micra Diesel from its Petrol counterpart, except for a DCi badge on rear, but Micra remains to look as cute as ever with that Micky Mouse like appearance and chic lines of design. Once you turn on the ignition, suddenly the 1.5-Liter Diesel motor strikes in to make you realize of the Wolf under Sheep’s clothing. The Micra's K9K Engine boasts 1461cc and churns out 64BHP of Power @ 4000 RPM, along with 160NM of Torque @ 2000 RPM. Now, gone are those days of inserting the key, and twisting it to crank the engine - Just put your transponder system inside this car, Press the clutch and tap the start button, with a slight jerk, the Micra begins to move forward. Once the engine turns on, chances are that you will be left into a surprise because the car is quiet when idle. In addition, the Gearing ratios are better than many other hatchbacks, resulting that you need not to downshift frequently.

Shifting on to first gear lets you reach top speed of 43 kmph and the 2nd gear pulls out 77kmph, whereas 107 kmph in 3rd and 140 kmph in 4th gear respectively. Nissan claims the top speed of 158 kmph in 5th gear. Though, Micra's Gearbox is all set for the best ratios, you may feel a bit under powered in 1st gear, but 2nd and 3rd gear would bring back the lost smile of your face. The Torque figures are lowest of the segment & only could be compared to Figo, when speaking about the Diesel, there should be obviously a lag. However, astonishingly, it is close to zero in the Micra. Blazing through dead traffic gets a little easier because Micra floats smooth with second gear @ 10kmph, third @ 20kmph, fourth @ 35kmph & fifth @ 45kmph, pushing the gas pedals makes a heavy engine roar. Splurging from NIL to 100 may not be that impressive as segment leaders, still the Micra does a decent job in 15+ seconds, same as its petrol sibling. Braking is not that impressive in wet due to lack of ABS, but it does a commendable job in dry areas with the Disc and drum combined.

Safety, which redefined with the Micra petrol, is into surprise now with the launch of Diesel. The same manufacturer that offered EBS, ABD & BA has cut down everything for the sake of competitive pricing. At least an option of all these could have been given for potential buyers. Now, what you get is a single driver airbag, but no airbag for co-driver’s seat, even on top-end variant. Thanks to an Ultra-light K9K diesel engine, Micra gives 15 kmpl easily in city drives and 22+ kmpl on Highway drives. In our journey of over 400 kilometers, the car managed to return an average of 19.2kmpl, whereas the worst figures received was 12.1 only. 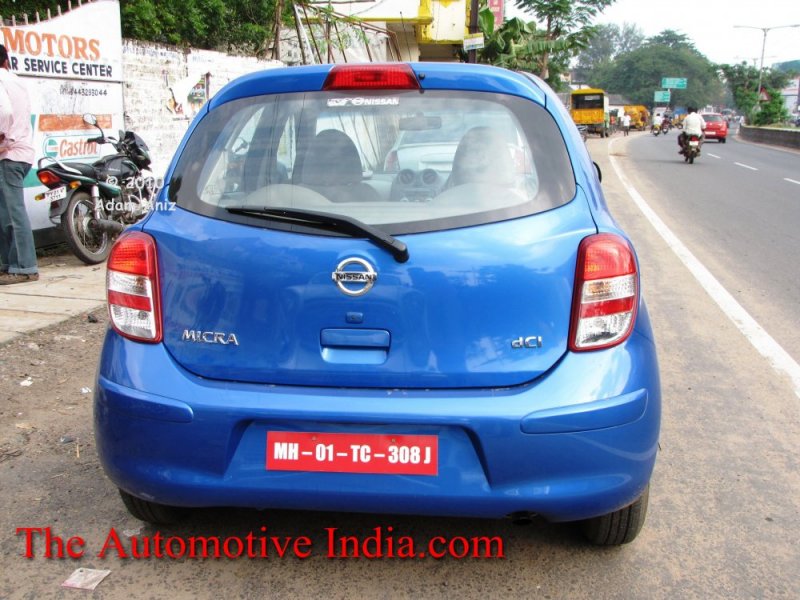 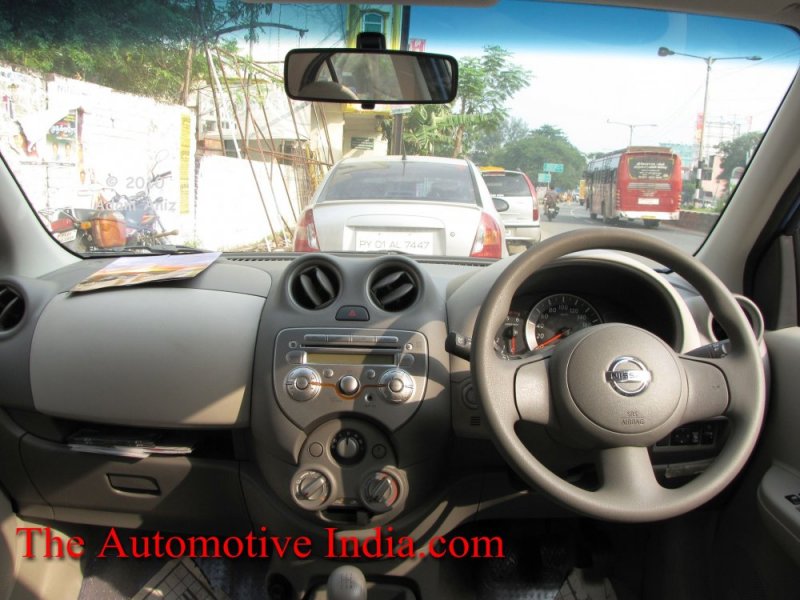 We thought of giving direct inputs to the manufacturers, so here we go with our wish list for Nissan India which could help making the Micra an even better hatchback.

What we Dis-Like in Nissan Micra Diesel? 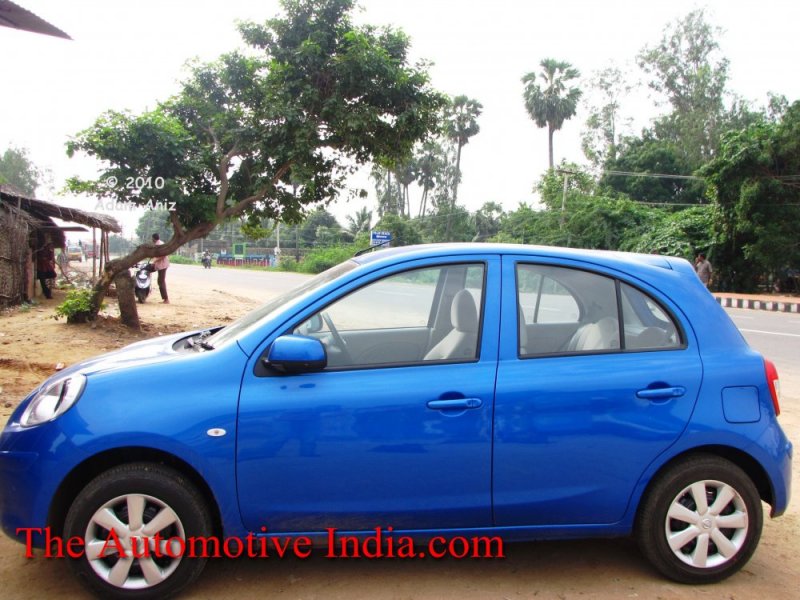 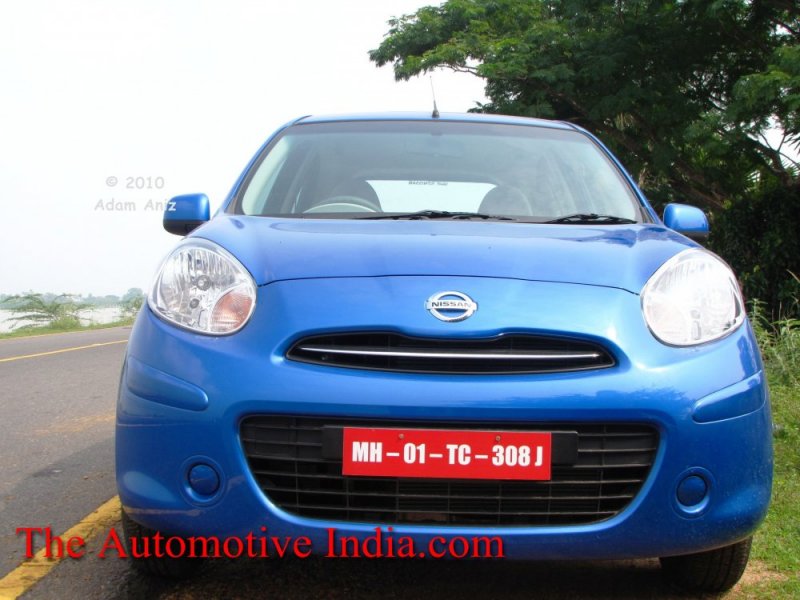 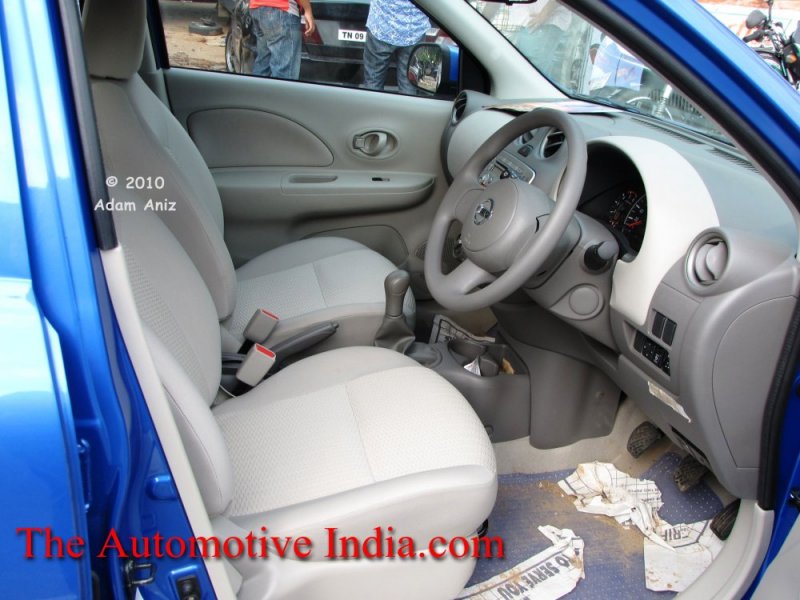 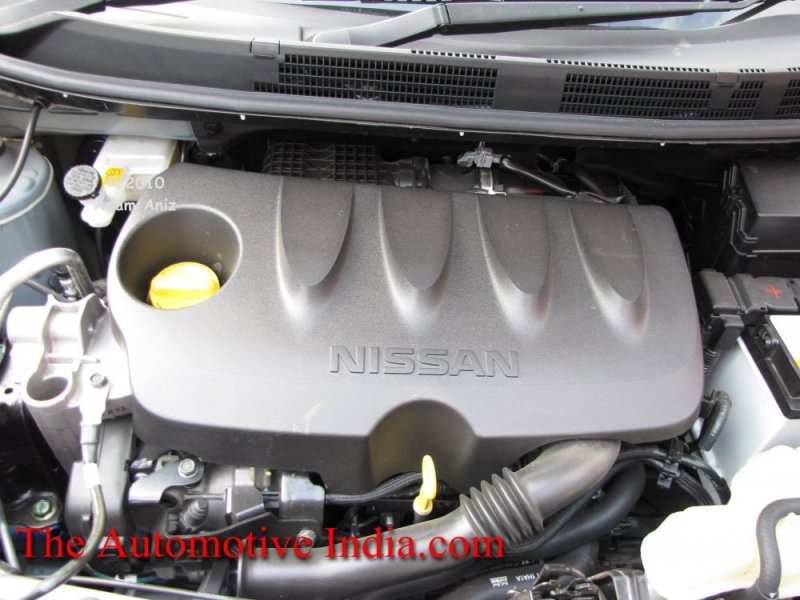 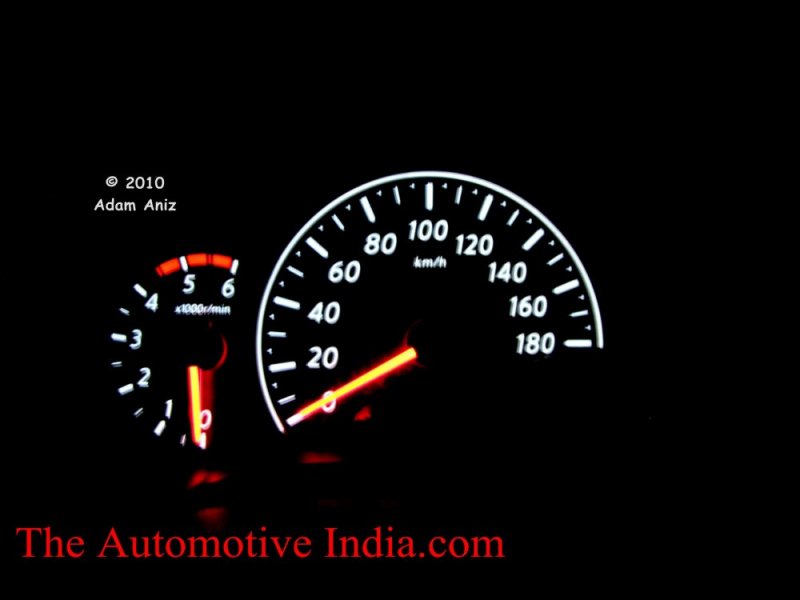 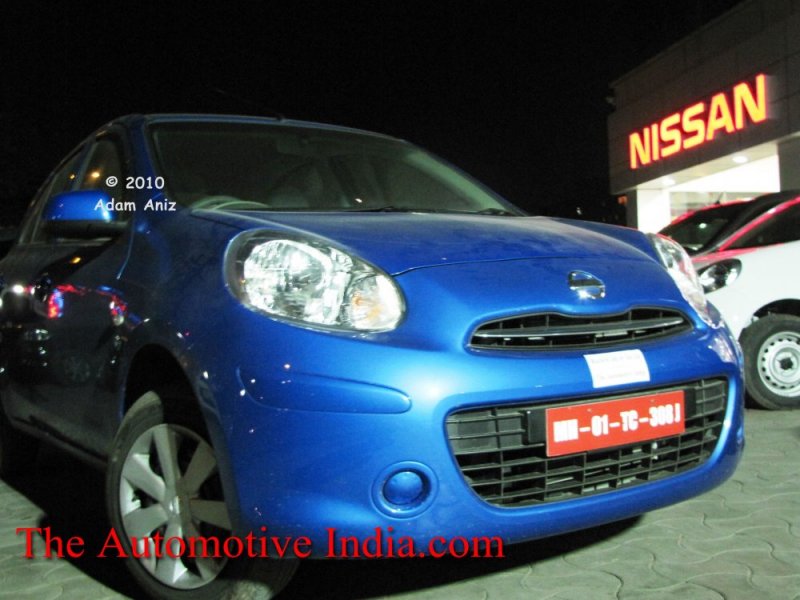 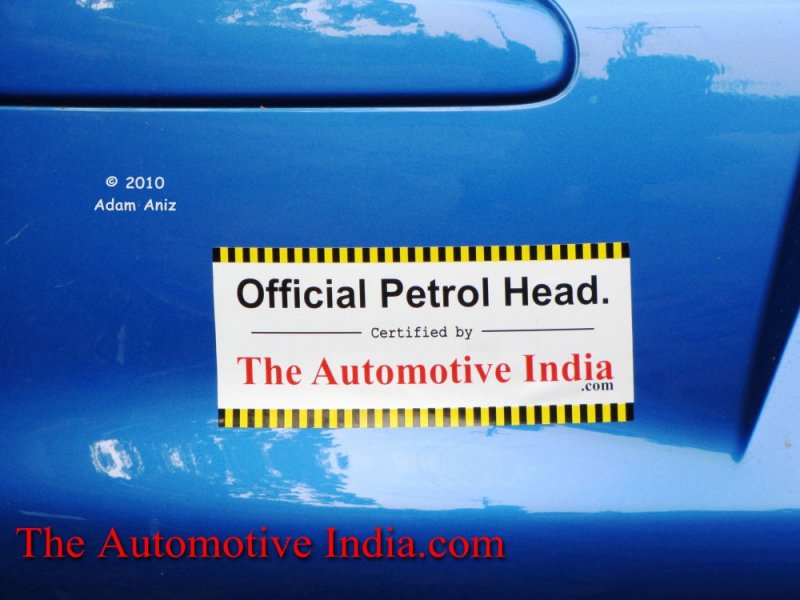 Had not zinam , mention about the diesel heart , i would have taken time to realize its a diesel one.

Thanks for the ride man.
My first ever ride in a car - pre release.!!!

About rear seat , hope it was mentioned in petrol version test drive , its comfortable only for 2 , or is that i am used only for the driver seat?.

Zinam , showed its abs braking efficiency , i used to go with my mechanic for trial runs in car , he used to apply hard braking and tyre screech for micro seconds !- missed the sweet tone here.

What surprised me is the boomerang design roof for aero dynamics! Noted this in this micra - though one petrol version have come for a break down , i didnt notice that.


Bubbly looks , how many of you like them , am confused!!

As usual cool pictures , and happy that i can find my car in the pictures too , hmm surendar's car too could be found in one of the picture.
T

good review Zinam!! this car looks good. i heard this diesel has alloys also. anyone seen the alloy design?

Yes, we have Alloys on Premium model. Its looks the same as petrol version.

Excellent report Zinam. Micra looks pretty in this color. I dont like the exteriors of this car, but the interiors look damn cute. I am still waiting to td Micra as soon as the Nissan dealership gets operational in Nagpur.

Good review Zinam! I missed a chance to get a feel of this car!

No Probs guys! This is one exceptional diesel car which everyone should drive.

It is really an understated car, until you drive it.
A

Any further updates on this??
How is the car overall ? I heard that Nissan Micra diesel is the most fuel efficient car currently in market ? People are getting 24+ in City driving conditions and 27-28 on highway..
Also, maintaince charges are also reseonable..

In city 24 O_O unless there is no traffic there is no way at least in delhi
You must log in or register to reply here.