Whatever the rumors are, but if it is launched by nissan then its definitely gonna shake the market, due to its better looks and may be prices as well.

Some update on Nissan Duster AKA 'Terrano'

If you think Renault Duster is overpriced(Yes I strongly think so) then read this from latest developments ...

New updates in Nissan Duster by end of this year.

To be unveiled later this year Nissan is allegedly reviving the Terrano moniker with its own version of the Dacia/Renault Duster. Nissan's variant is expected to cost more than the other two as part of an agreement within the Renault-Nissan alliance which states a Nissan-badged Renault has to be more expensive than the donor car. The same rule applies for a Renault-badged Nissan which will cost more than the original Nissan model.  It is believed the Nissan Duster/Terrano will adopt several exterior modifications to make it look more like Nissan's SUVs. The same report indicates the interior cabin will remain virtually the same, except of course for the company logo. Nissan's own Duster is rumored to arrive later this year. Chances are Renault/Dacia are planning to unveil a facelifted Duster in September at the Frankfurt Motor Show.


It’s official. Nissan’s upcoming SUV is labeled as Terrano. The launch is scheduled within FY 2013 and will be manufactured at Nissan’s Oragadam plant.

First ever official sketch reveals that it’s more or less a modernized version of Duster. It has a huge potential if priced right. 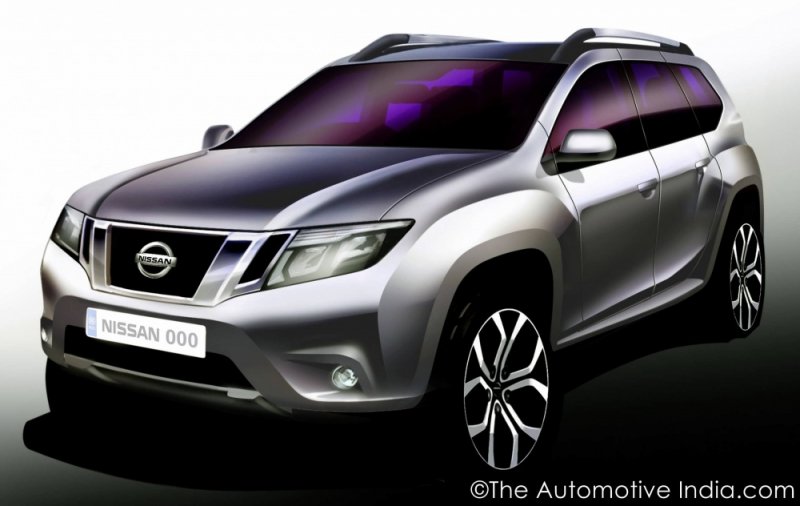 Wow this does look quite modern in sketch at least as compared to the old school looks of the Renault. Will have to wait and see how the production version ends up to be. If its even 80% of what this sketch looks like, I am sure a price premium of 75k over the Duster will hold good. Else the Renault has already established itself quite nicely in the Indian market and it will be a little difficult to overthrow it with a similar product and higher pricing.

A rendering of the possible production version of the Terrano from the Indianautosblog.com If the production version looks anything like this, I don't see a point paying 50-75k for just a set of new grill and bumper along with blackened B and C pillars. Unless there are noticeable changes inside with better features and improved plastics, there won't be many takers for this over the Renault. 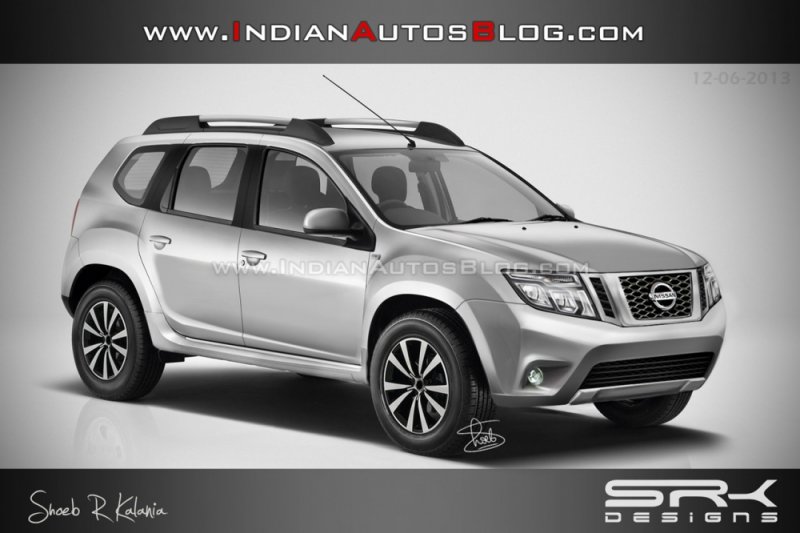 Terrano looks terrific in looks. i feel it will look better than Duster ( no offence to Duster owner). Looks like another forum that will go crazy till this is launched. Ecosport - Here comes a competitor for you!!!

It cannot compete with Ecosport as the ES falls under 4M hence will carry a price advantage and moreover Ford's sales network and the brand recognition is much bigger than Nissan.
N

Terrano is quite a looker for sure, it is still speculation but if this one is priced higher than Duster than Terrano will be in XUV territory and I think here Nissan will not find many takers for Terrano.
IMHO Renault should introduce price correction in the Duster (I am sure many will agree that Duster is overpriced by at least 100k) . Nissan should launch Terrano with better interiors and (wishlist) 4x4 and the price should be similar to current price range of Duster to make it overnight success.

MotorBeam Exclusive. Nissan will launch the Terrano SUV in October and we have got the price for you. The Japanese automaker will price the Nissan Terrano starting at Rs. 8.90 lakhs (ex-showroom, Delhi). The Terrano will be offered with a 1.5-litre diesel engine only and no petrol powered Terrano will be launched. Nissan has seen the poor demand for the petrol Duster and has decided not to bring a petrol powered Terrano. The picture you see above is the official studio shot of the Nissan Terrano, yes it doesn’t resemble the sketch which Nissan released recently.
Nissan will use the tagline “As solid as you” for the Terrano. The company will offer all variants of the Terrano with driver side airbag as standard, something which it does on its other cars as well. The Nissan Terrano will be offered in four variants which are XL, XL (O), XV and XV premium. The 1.5-litre diesel engine produces 85 PS of power and 200 Nm of torque, mated to a 5-speed manual gearbox. This engine gives the Terrano an ARAI mileage of 20.5 km/l.
The difference between the Nissan Terrano and Renault Duster will be purely cosmetic. The changes include smoked headlights, new front grille, new bumper, new alloy wheels and new tail lights. On the inside, Nissan will give the Terrano minor changes which will be limited to the seat fabric. The base variant of the diesel Duster (RxE) is priced at Rs. 8.73 lakhs (ex-showroom, Delhi) and thus the premium which Nissan is charging is Rs. 17,000/- on the base trim. However the premium will vary depending on the variants and one can expect it to increase on higher variants.
Stay tuned to MotorBeam as we dig in to get more information on the Nissan Terrano.
Copying of information in this post and using the above picture is prohibited. If you want to use it, please give a link back to MotorBeam.com.

The Yokohama-based company has also lined up the all-new compact SUV 'Terrano', based on the hugely successful Renault's Duster SUV, which will be one of the big launches here in July.

Source: Nissan to roll out Datsun, will revamp whole range of vehicles in India - The Economic Times

The rear sketch of the Terrano has been under unveiling through twitter updates from Nissan India. From what I can make out till now, the rear looks surely more up-market than the Renault Duster. Its now the pricing which will be the key for its success because Duster itself is an over-priced product and Terrano is going to be positioned further up. Heavy price correction is required from Renault-Nissan so as to make these car selling in decent numbers in the future.

Nissan Terrano has been caught testing

The Terrano was spotted on the NH45 which connects Chennai city to the Renault Nissan factory.

Nissan has on test at least two Terranos as the number plates on this prototype is different from the one earlier spied. And even though Nissan India has released the design sketch showing the rear of the Terrano since, the prototypes continue to be camouflaged.

At the front, the Terrano looks nothing like the Duster (on which it is based on). The general comments from our readers seem to be pretty positive as to the looks of the Terrano.

At the rear, the Terrano sports a split taillight design which certainly looks better than the Duster. While the design sketches did not sport a wiper, rest assured it will be available on the top end models, as seen on this prototype.

The instrument cluster outline on the Terrano is also different. Where the Duster has a ‘wedge’ portion in between, the Terrano has no such thing. It resembles the Nissan Sunny/Micra again.

The Terrano is likely to be launched by the festive season commanding a premium price of about INR 40,000-50,000 more than the Duster.