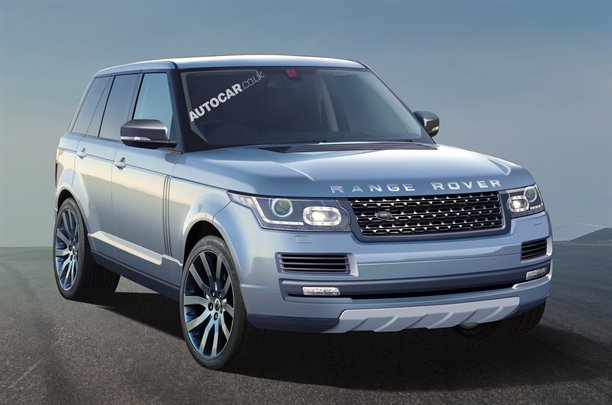 This is inspired from the existing Evoque. Even though it’s looking more stylish but has lost the characteristics of a typical Land Rover which I feel shouldn’t happen.

350Z said:
This is inspired from the existing Evoque. Even though it’s looking more stylish but has lost the characteristics of a typical Land Rover which I feel shouldn’t happen.

Drive safe,
350Z
Click to expand...
ya side ways but evoque is too small , looks good but really not much ideal 4wd

The all-new, fourth-generation Range Rover is shedding more of its camouflage, giving the clearest indication yet of its styling before its launch later this year.

The latest prototype, scooped testing yesterday in the Midlands, reveals the evolutionary looks of the new car. Land Rover has opted against a significant styling overhaul of its most luxurious model, given the longevity and popularity of the current design.

The front-end styling has been modernised and softened slightly from before; the biggest change is to the front headlights, which wrap around slightly into the sides of the car.

The boxy profile of the third-generation Range Rover has been softened slightly for the new car, although Land Rover has decided against giving the new model a more Evoque-style sloping roofline that earlier prototypes featured. One big change is rear cabin access; the rear doorlines are raked further backwards to create a wider opening.

The changes have also been kept to a minimum at the rear, the biggest news being slimmed down light clusters.

The real changes to the new car will be under the skin and in the cabin. The new Range Rover will be first Jaguar Land Rover model to adopt the all-new modular aluminium monocoque platform that will be used beneath the firm’s next generation of mid-full size cars.

The new architecture should result in a significant weight saving – as much as 400kg – over today’s heavyweight Range Rover. The new platform is also said to offer a significant increase in rear legroom, one of the chief criticisms of today’s car.

Inside, a greater emphasis than ever will be placed on luxury as Land Rover looks to beat the likes of Bentley, Maserati and Aston Martin to the super-luxury SUV market. Expect features from last year’s £125,000 Autobiography Ultimate Edition – such as individual rear seats and a bespoke rear centre console milled from a single piece of aluminium – to carry over into top-end £120,000 versions of the new car.

The entry-level model is expected to cost from around £65,000, and is likely to be revealed at the Paris motor show in September before going on sale early next year.

nah, I am not liking it. The RANGE ROVER HERITAGE IS GONE WITH THIS CAR.

Another set's of photo's

I think its the Range Rover Sports. According, to the head lamps it seems like the SPORTS variant of Range Rover.

YashD said:
I think its the Range Rover Sports. According, to the head lamps it seems like the SPORTS variant of Range Rover.
Click to expand...
I guess you are right, it could be RR sport

Another set of pic's, this time the test mules were caught in China.

Italian Publication Quattroruote has rendered the 2013 Range Rover in their latest edition. The new Range Rover will be unveiled at the Paris Auto Show in September

First spy shots of the dashboard of the new Range Rover , waiting for the end of 2012. The general outline of the passenger compartment remained substantially the same as the current model although there is a greater attention to ergonomics and a more modern and functional design of the dashboard, clearly inspired Evoque . Since it was taken the position of the large infotainment screen placed immediately below the air vents square, and the climate controls. The center tunnel is finished in wood houses the joystick on-board computer controls the automatic transmission, four wheel drive run by their differentials. The SUV English born on a new aluminum platform which will enable it to be lighter than 400 kg. The new Range Rover Classic will be offered with engines petrol and diesel V6 and V8 engines, more efficient than the current, all combined with a traction system full.

A single picture of the 2013 Range Rover SUV caught without any camouflage other than a light protective white skin on its clamshell bonnet made its way online today, courtesy of MotorAuthority.

The image along with the article, however, was pulled down from the site without any explanation, but not before it made a world tour around the internet.I found this on this dutch website.

Bentley is making an SUV with lots of room in the back. Lamborghini, meanwhile, is also making an SUV that’s supposed to be light thanks to a lot of carbon fiber. All those engineers are probably looking at the Range Rover sport and the Porsche Cayenne for inspiration, searching for ways to convince Arabs that they have something different.

But Land Rover is one step ahead of them, as the new Range Rover SUV is about to be revealed, and should be lighter and bigger inside. And if the normal version isn’t enough, you will definitely be able to stretch your legs in the back of the extended wheelbase version. This is the very first time that the extra inches have been spotted, and we have to say it’s pretty royal-looking. All the crown princes will want one of these.

The engine range should include the new 3.0-liter supercharged V6 that replaces the normally aspirated V8, as well as the full-bore supercharged 5.0-liter.

Read more: 2013 Range Rover leaks on to the web