Next Gen. Polo Already in the Making?

German automaker, Volkswagen is already working on the next generation Polo. However, no special information has emerged except for this sketch. 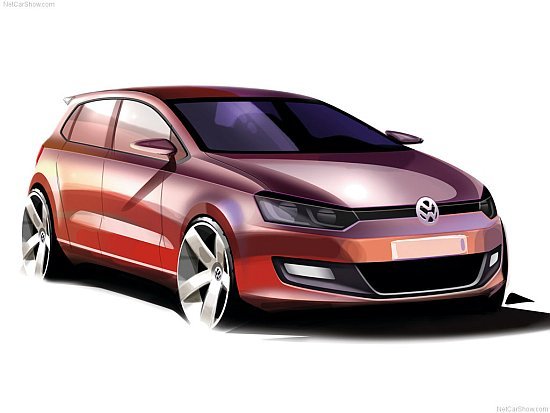 Look at its Alloy. Its really huge.

Styling cues look very similar to the present Polo's, and in fact looks like an inflated polo.

Yeah exactly and thats mainly because of those huge alloys!

This sketch is has close resemblence with the current Polo.

This looks more like a VW Scirocco sketch combined with the rear styling of VW Golf GTI!

i doubt the production car will look as good as this one.
A

Havent we all seen stunning looking sketches only to be disappointed by the final product.

Its polo SUV which will competive with renault duster

A.D.S.Mann said:
Its polo SUV which will competive with renault duster
Click to expand...
Mind sharing the source of the information buddy!! If it's true it would be nice to see such a product from VW.

There has been a Crosspolo but its nothing more than a jacked up hatch. Google it.

I am pretty sure that this model would be based on the all new MQB platform,design changes look's evolutionary than revolutionary.

Rendering – VW Polo facelift to get the 1.0-liter 3 cylinder engine from Up!

The VW Polo is due for a replacement and we should be seeing the next generation model hit the stores sometime in 2015. Before that, VW will introduce an updated model year variant for the Polo which will include certain features such as daytime running lights and a differently designed bumper and so on.

Apart from these exterior differences, the updated Polo would also feature an additional engine option. This would form the new base variant for the Polo and the engine is likely to be carried over from the VW Up!

The same engine has also been tuned to produce 75PS of power while churning the same amount of torque. 0-100km/h takes only 13.2 seconds in this spec while the top-speed is an Autobahn friendly 171km/h. It averages 4.0L/100km (25km/l) while producing 108g of CO2 per km.

VW may want to introduce this engine in the Polo so as to offer a variant with lower CO2 emissions and a better fuel economy than the existing lineup. The Up! with the 1.0-liter engine has an efficiency class rating of C while the base Polo has a D rating. As a result, the taxes would be reduced in a 1.0-liter Polo, not to mention the cost to make it.

VW Polo facelift to get 1.0-liter 3 cylinder engine from Up!

The new facelifted Polo scheduled to be launched in India in May 2014 will come with the new 1.5TDI engine in two states of tune. The 1.5 TDI engine will come with two power outputs – 89bhp and 104bhp – and these will replace the 1.2-litre TDI and the 1.6-litre TDI, respectively, making the Polo much more attractive. The standard Polo will get the 89bhp engine, whilst the more powerful 104bhp variant, expected with a variable-geometry-turbo (VGT), will power the Vento saloon and the 2014 Polo GT TDI.

draneeshpm said:
The Jetta has a beautiful blue shade,why don't they offer the same here?No Polo facelift also?They are supposed to bring the Facelift this May.Weird strategies.
Click to expand...
VW will launch Polo facelift in Geneva Motor Show in March
You must log in or register to reply here.