And finally back from another memorable trip to Tadoba in ever-reliable Tata Safari. It was a 1655.3 km journey with an mileage of 12 km/l with AC all the time!

The AC turned out to be just good enough for temperatures crossing 45+C, no trouble whatsoever. The engine temperature also never crossed half-mark, guess new engine oil and coolant did make a difference. The cruising speed varied from 50 to 100 km/h depending on road conditions.

Return journey ..
- started from Tadoba at 3.30pm on 19th and reached Pune at around 8.30am next day (20th)
- this time we did take a lot more breaks and it took 17 hours for 800km.
- tried to take a different route via Yavatmal but reverted back and just came via Wardha; in the process lost a couple of hours and covered extra km.
- the return journey route remained almost the same

Overall, it was an enjoyable and comfortable ride in Safari with no untoward incident, fortunately.

BTW, we did see a lots of animals and birds during 5 jungle safaris that we undertook and were lucky to get TIGER sighting 3 times :)

Lovely journey.
We did tadoba in 2015 but did'nt spot any tigers.
H

Hi Sir, Thank you for such well documented ownership review. I just purchased a 2005 3.0 beast myself and really found this forum helpful. It has done 1,23,000 km and recently had a new clutch fitted in. I have some problem in my left rear suspension ie it sits lower than other . I think this is why the car pulls slightly to the left . Anyways was wondering if changing that would be advisable
H

I found a new problem today. My A/C was not cooling at all , so I had it checked . Turns out my compresssor was worn out so needed a new one . Got a second hand one from kurla for ₹5500 and replaced it. But now the pickup of the car is 30% of what it was and it smokes like crazy . Even in traffic speed (@1100-1500 rpm) . The second gear has no life in it. Any suggestions what should i do. Also recommended a good mechanic around Thane area . I live in Mulund

is the second hand compressor jammed or belt/ pullies too tight?
H

Thanks for the reply.
The problem was solved the vaccum lines were not connected properly to EGR which kept it open all the time

You are driving a safari 3.0 in 2017. which many people call as an Outdated an truck engine. But it used to be one of my fav engines. Hows the overall safari experience in 2017>?
H

Well , I have an new Honda City and let me tell you this, thank all the noise insulation that we have today. . To be honest, it doesn’t feel that much dated . There is usual wear and tear but its OK. The rattle is the biggest issue i think, atleast in city (I live in Mumbai) . But once on Highway , with some music , you wont be able to tell its an 12 year old Tata Safari . The driving feeling matches nothing. Trust me Innovas and other so called Big cars (except The new fortuner and endeavor) dont even come close to what driving sensation the safari , even better than the Storme if i am being brutally honest. I have had troubles with AC and some electricals , But mechanically the car is very solid (thanks for the truck underlayings) . I will try to upload few images and I think I need your help

1. I don’t know the colour of my Safari nor have i even seen photos of other Safari with this color. The one on RC book just says Green.

2.The paint still looks like it left factory 2 years ago instead of 12 . 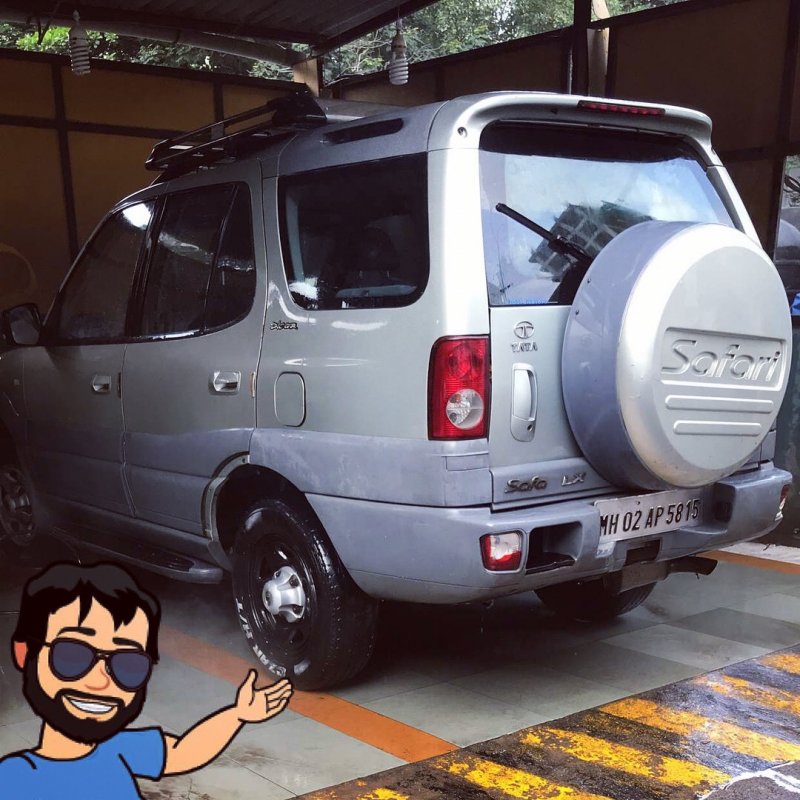 I think it was called champagne green.

In photos It looks like a white car. Also the Grey plastics have faded due to sun.
A quick wrap job could do wonders here.
H

Yeah ... I plan to repaint him.. Remember Tata Safari Tuff? The one which Tata showed in expo.. Plan to do something like that.. Grey/Black.
Right now my AC fuse has melted the plastic near the fuse box. I would like to reroute the wires but need user manual. Can i find that anywhere?

Himanshu Satav said:
Yeah ... I plan to repaint him.. Remember Tata Safari Tuff? The one which Tata showed in expo.. Plan to do something like that.. Grey/Black.
Right now my AC fuse has melted the plastic near the fuse box. I would like to reroute the wires but need user manual. Can i find that anywhere?
Click to expand...
I guess I got the manual, let me check if it a has wiring diagram. If it has, will scan and upload it here.
H

Himanshu Satav said:
Thanks... Can you mail them to me at csheen164@gmail.com...
Click to expand...
Sorry man, could not find the diagram there.

Just an update .. getting ready for another long trip to Gujarat with my family in the last week of this month. Going to Gir National Park which is around 1000 km. (one way) from my place (Pune.) May visit Somnath and also Sabarmati Ashram on the way back, if possible.

Most probably, would be starting in the night of 23rd (Saturday) and intend to return by 30th morning. My Safari is in garage right now, getting suspensions and related parts replaced.

Just looking forward to another memorable trip in my Safari.
K

Guys I could not resist myself from getting into this thread. After reading whole thread and going through many discussions about tata safari, I have finally found my safari. I have got a nice condition safari dicor 2.2 ex ! I have finalized the deal today and getting my beast shortly. Will post a detailed info on that shortly. Keep watching.
You must log in or register to reply here.