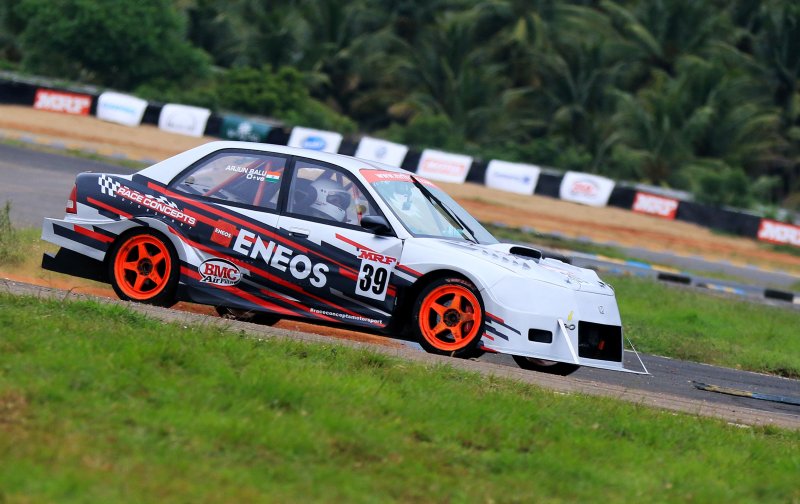 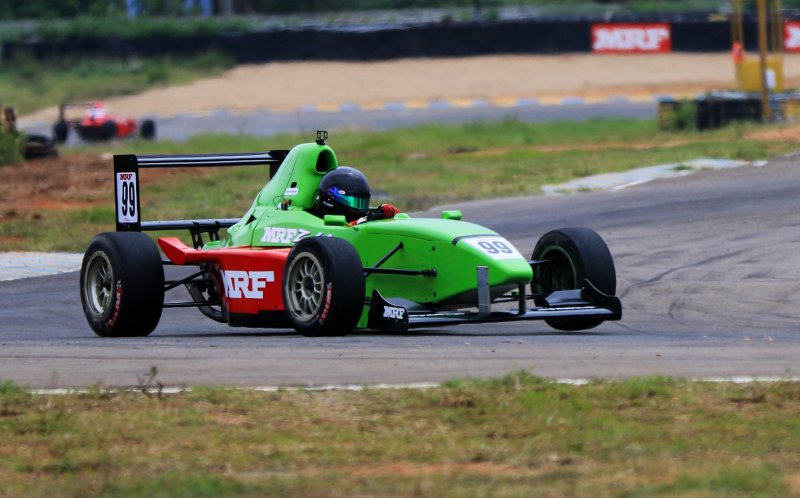 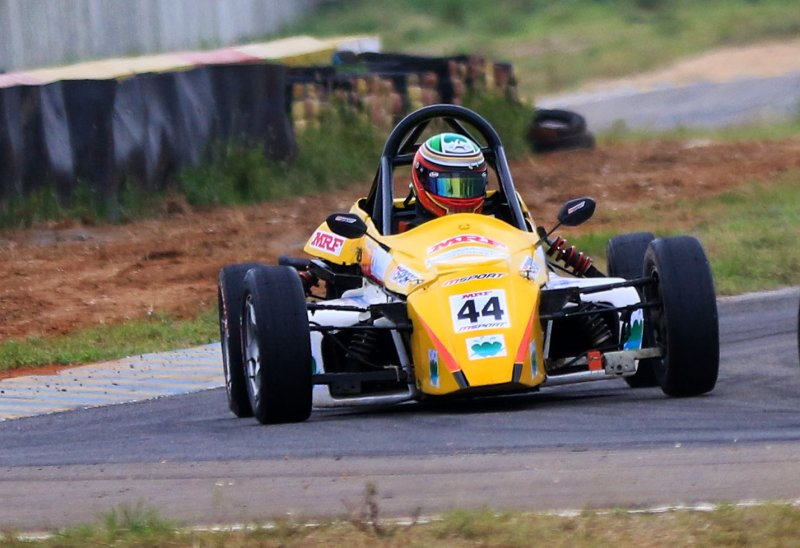 ​
Coimbatore, June 22: Local ace and former champion Arjun Balu, driving a Race Concepts-prepared Honda City, marked his return to racing after a five-year gap by topping both the free practice sessions in the premier Indian Touring Cars class as the second round of the MRF MMSC fmsci Indian National Racing Championship got underway at the Kari Motor Speedway here on Friday.

Balu, 43, put in consistent laps in both the sessions at the 2.1 Kms long circuit, clocking a best of 01minute, 09.004 seconds in the first outing and improving it to 01:08.766 in the next. Behind him in the time sheets were Arka Motorsports team-mates Ashish Ramaswamy from Bengaluru and veteran Narayanaswamy Leelakrishnan (Coimbatore). The three drivers looked in a league of their own to set up a close qualifying session on Saturday morning.

Meanwhile, Raghul Rangaswamy from Kancheepuram was the fastest in the MRF F1600 free practice sessions with a best of 01:02.672 in FP1 and though his second session was restricted to just two laps to preserve his tyres, no other driver went quicker.

Sandeep Kumar (Chennai) topped the second practice session while Kolkata’s Arya Singh, the 2017 Formula LGB 1300 champion, Chennai’s Ashwin Datta and Nirmal Umashanker, both from Chennai, filled the top four spots in this session, and all separated by less than a second.

Bengaluru’s Varun Anekar (Race Concepts) dominated the two combined practice sessions for Super Stock, Indian Junior Touring Cars and Esteem Cup cars by topping the time sheets as did Chennai driver, Nabil Hussain (MSport) who was the fastest in the Formula LGB 1300 class that has a 19-car grid, clocking a best of 01:08.432 in the first of the two outings.

The Madras Motor Sports Club has been the pioneer in developing and promoting motorsport in India since 1953, and we look to further improve in the years to come. It is the club’s endeavor to provide more opportunities for competitors and to this end, it has chalked out a progressive program for 2018. From the days of Sholavaram , MMSC built its own racetrack which was inaugurated in 1979 and secured its FIA Grade-2 international certification in 2015, making it the only club which owns such a facility. The club has organised the Porsche Super Cup, Formula Campos, Formula Asia, Asian touring car championships, Formula 3, Tata Prima Truck racing championship, the Asian 2-wheeler racing championships besides a host of other motorsport events over the years. The club also has active participation for its events from vehicle manufacturers who also use the Madras Motor Race Track (MMRT) extensively for testing their products.
Click to expand...
Regards 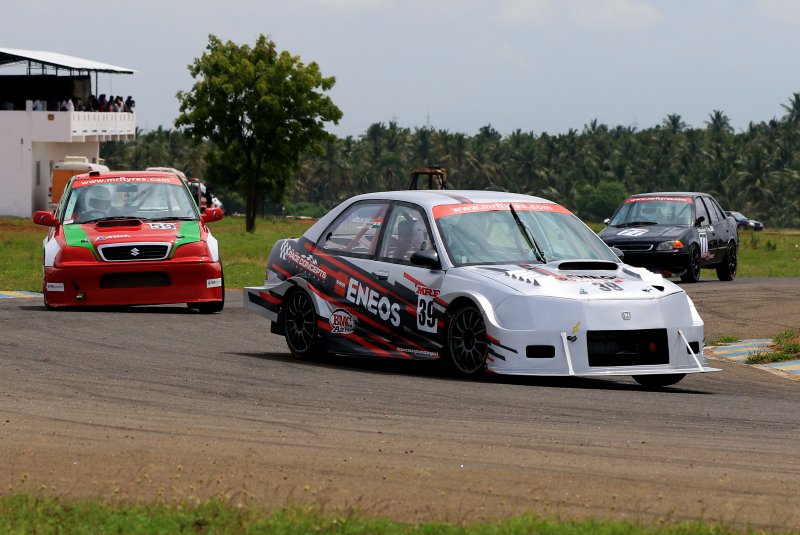 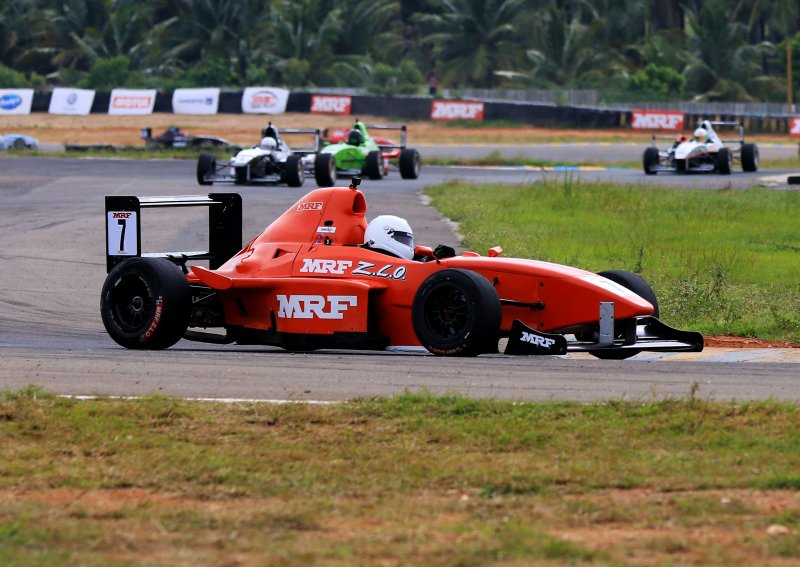 The two Formula LGB 1300 races witnessed close competition with Sohil Shah (MSport) from Bengaluru winning the first outing after a hectic scrap with team-mate Nabil Hussain from Chennai while Ashwin Datta took the second race that witnessed a couple of crashes, but drivers escaping unhurt. Datta, only 19, drove brilliantly after dropping from second to fourth and overtook three cars to jump to the front and eventually win the race.

In sharp contrast, Ashwin Datta earlier enjoyed an untroubled ride to victory in the first of the three MRF F1600 races scheduled for the weekend. Having started from pole position, Datta drove a near-flawless race to win by the proverbial country mile. Behind him, Raghul Rangasamy, hailing from the temple town of Mamallapuram, fought his way to second spot ahead of Chennai’s Nirmal Umashanker. The remaining two races will be run on Sunday.

For 43-year old Balu from Coimbatore, it was a comfortable lights-to-flag victory. Starting from pole position, he gradually built up a sizeable lead with Ashish Ramaswamy (ARKA Motorsports) and veteran Vidyaprakash (Prime Racing) in tow. However, Ashish, winner of two races in the first round in February, retired after his engine expired and it allowed Vidyaprakash and team-mate B Vijayakumar, also from Coimbatore, to second and third positions which they maintained till the finish.

“Everything went well in the race and my focus was to put in consistent laps without sacrificing my pace. I could see that after three laps, I had pulled a decent gap. More importantly, this victory is dedicated to my team Race Concepts who worked so hard in the past few days to prepare the car. We were a bit nervous after the last minute changes to the car to comply with the regulations. I always respected my competitors and so did not take anything for granted despite qualifying on pole position,” said Balu who began his motorsport career in 1992 as a racer before getting into rallying in 1995, followed by an odd appearance in racing competition.

The results (Provisional, all 15 laps unless mentioned): 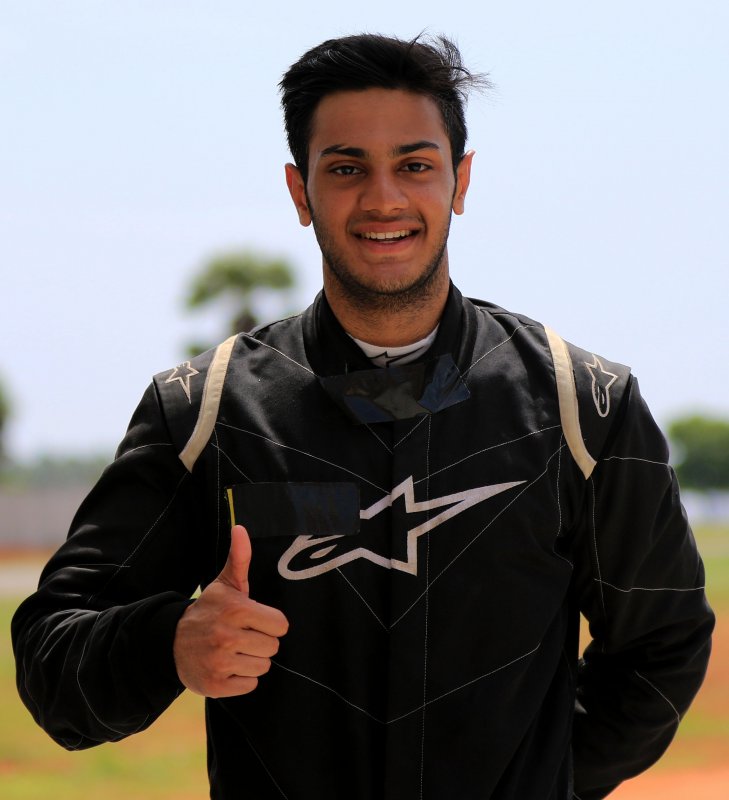 ​
Coimbatore, June 24: For the second day running, young Ashwin Datta (MRF F1600) and veteran Arjun Balu (Indian Touring Cars) hogged the limelight with a triple and a double, respectively, as the second round of the MRF MMSC fmsci Indian National Racing Championship concluded at the Kari Motor Speedway, here on Sunday.

Datta, a 19-year old from Chennai and making his debut in the MRF F1600 class, finished the weekend by winning all the three races while Balu, 43, marked his return to racing after a five-year break by dominating the premier Indian Touring Cars class where he won both the races in imperious style.

In the morning, Datta, who had won the first race of the triple-header on Saturday, was off to a great start as he made three places in the very first lap before an incident brought out the Safety Car. On re-start, Datta wasted little time to ease past the front-runners and gradually opened up a commanding lead to emerge a creditable winner with Bengaluru teenager Yash Aradhya and Chennai’s Nabil Hussain following him over the finish line.

Datta, in just his third full season of racing, having graduated from junior Formula competitions, sustained the momentum by winning the third MRF F1600 race in the afternoon, this time, from flag to lights despite two Safety Car interruptions.

“The wins are unbelievable. I had good pace through the weekend. My progression in the past couple of seasons has been mainly due to my initial training at Meco Motorsports and later at Momentum Motorsports who nurtured me. Frankly, my target for the weekend was to finish in the top five, but am happy that everything came together,” said the 6ft, 2in tall Ashwin who dropped his weight from 94 Kgs to 72 Kgs in two months to get fit for the races.

For Balu (Race Concepts), it was a memorable comeback this weekend. Watched by his family, he started the race from fourth on the reverse grid, but quickly moved to second as the pack braked into Turn-1. By the second lap, Balu had taken the lead when an incident brought the Safety Car out. On re-start, the former champion stepped up the pace, unaware of the hectic battle raging behind him. Ashish Ramaswamy (ARKA Motorsports), winner of two races in the first round in February but a non-finisher in yesterday’s first race, moved up from 11th to finish second ahead of veteran B Vijayakumar (Prime Racing).

Later, Veeresh Prasad (Race Concepts) from Bengaluru came up with a brilliant performance while winning the Super Stock race after starting from 13th on the grid. He cut through the field with ease and then, after chasing front-runner Deepak Ravikumar (Infinite Piston) for a few laps, made his move to hit the front. Thereafter, it was a virtual one-horse race as Veeresh Prasad ran out winner by a fair distance ahead of Ravikumar and K Srinivas Teja (Performance Racing).

Mikhail Merchant (Team Game Over) from Mumbai and Mamallapuram’s Raghul Rangasamy (Performance Racing) took the honours in the Indian Junior Touring Cars and Esteem Cup categories, respectively, that were run concurrently with the Super Stock cars.

Kolhapur’s Dhruv Mohite dominated the Volkswagen Ameo Cup double-header by achieving a double. Starting eighth on the reverse grid, he showed impressive pace in winning today’s second race from Affan Sadat Safwan Islam (Bangladesh) and Saurav Bandyopadhyay from Thane. The race was reduced from the scheduled 15 to 12 laps following incidents that led to a red flag after five laps and a Safety Car period on re-start.

The results (Provisional, all 15 laps unless mentioned):