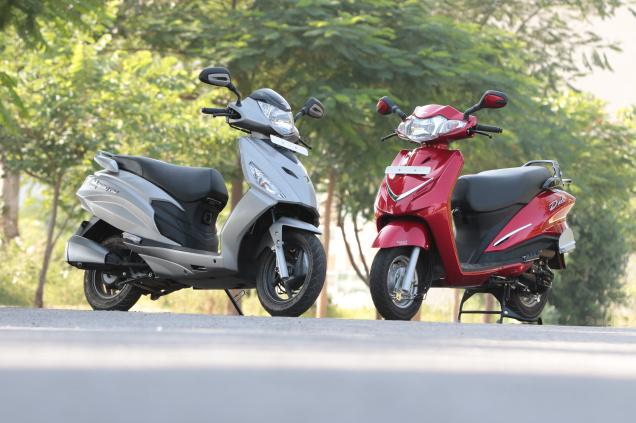 ​
Hero MotoCorp Ltd, the country’s top two-wheeler maker by volume, has regained the Number Two slot that it lost to TVS Motor Company in the scooter segment during the first quarter of this fiscal. Its comeback was aided by the higher sales that it achieved in the past three months on the back of new scooter introductions.

With this growth, Hero has become the Number 2 scooter maker after Honda, which sold 2,544,872 units during the said period.

While Honda remains a strong Number One player in the scooter market, the battle for the Number Two position has been fierce.

It managed to pip TVS as the second largest scooter-maker a few years ago.

But, TVS attempted a strong come back with new scooter introductions last year and displaced Hero from the second position during the first quarter of this fiscal.

Both the new scooters, developed in-house, helped the company increase its sales and market share. “Built on a completely new engine and chassis platform, the two new products demonstrate the passion for technology and innovation at Hero.

“These new products are a testimony to our ongoing efforts to create a world class R&D eco-system,” a company spokesperson told The Hindu.

Also, Hero’s strong reach and network of 6000-plus outlets across the country provide an edge in its bid to quickly ramp up sales.

Hero expects its two new models to be a dominant part of its scooter business during the next fiscal. The company’s scooter production capacity is about one lakh units a month.

However, it is working on increasing capacity at its new plant in Gujarat to support the additional growth that is expected through new scooters.

Scooter sales are expected to see growth rates in the low double-digits due to improving rural and semi-urban infrastructure, rising proportion of women in the workforce and increasing mileage that new products offer. 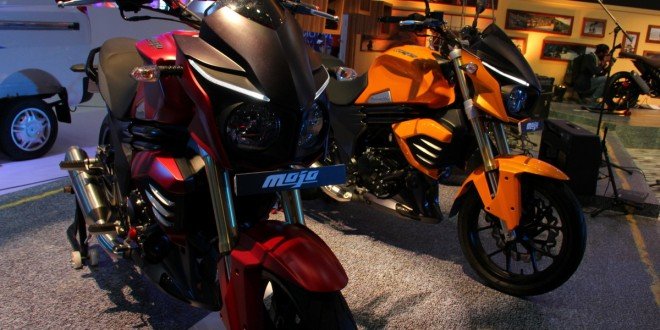 Mahindra’s Mojo has outsold the Honda CBR250R in the month of February 2016.
The Mahindra Mojo is being retailed only in 4 cities – Mumbai, Pune, Bangalore and Delhi, while Honda CBR250R is being sold all over the country. This is quite an achievement for the desi 300cc tourer.

Now, Mahindra has launched the Mojo in 15 more cities and will definitely hamper the sales of the Honda CBR250R. The Honda CBR250R sales declined from 212 units to 83 units. In February, Mahindra Mojo sold 93 units, while the Honda CBR250R sold 83 units. Mahindra is strategically planning its expansion all over the country, while Honda doesn’t seem to be making any effort to stay up in this segment.

Mahindra uses Pirelli tyres and Paioli suspension which gives it an edge over the Honda. Both the bikes are targeting the touring enthusiasts, who are looking for a reasonably priced mile muncher.

But for how long and how many will opt for the Mahindra Mojo over the Japanese reliability? 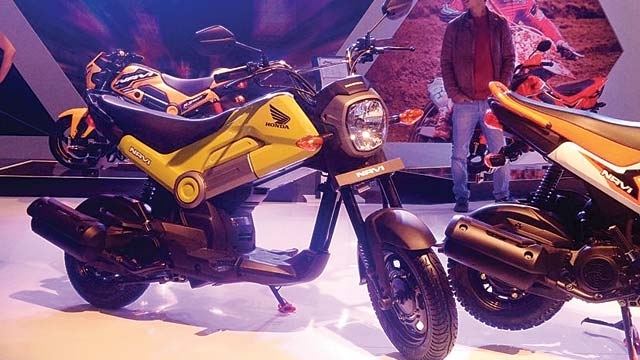 The company had sold 3,99,173 units in the corresponding month last year.

Commenting on the performance, HMSI Senior Vice President Sales & Marketing Yadvinder Singh Guleria said: "From a strategic perspective, 2015-16 was like a base camp for Honda and now we are fully armed for the steep climb in 2016-17." On the outlook, HMSI President & CEO Keita Muramatsu said: "2016-17 is going to be Honda's most definitive year in India...Our priorities will be strengthening the fun connect of Wing mark with

Indian youth, make all our models BS-IV compliant at the earliest for added customer convenience while continue to aggressively make inroads into rural India."

Hero MotoCorp sales up 14% in March

Hero MotoCorp Ltd (HMCL), the world’s largest two-wheeler manufacturer, capped-off yet another year as the dominant market leader in the country with a sturdy sales performance.

Sustaining its strong sales performance over the past two quarters, HMCL sold 606,542 units in the month of March, registering a growth of 14% over the corresponding month last year when the company had sold 531,750 units.

In addition to the continued success of its popular brands, the Splendor, Passion and HF Deluxe, Hero MotoCorp also gained significant traction in the 125cc segment with its Super Splendor and Glamour brands and maintained its leadership in this segment as well.

In the scooter segment as well, the company has been consistently clocking impressive numbers month on month, thanks to the immense popularity of Maestro Edge and Duet. Both these scooters are now available in all markets across the country. 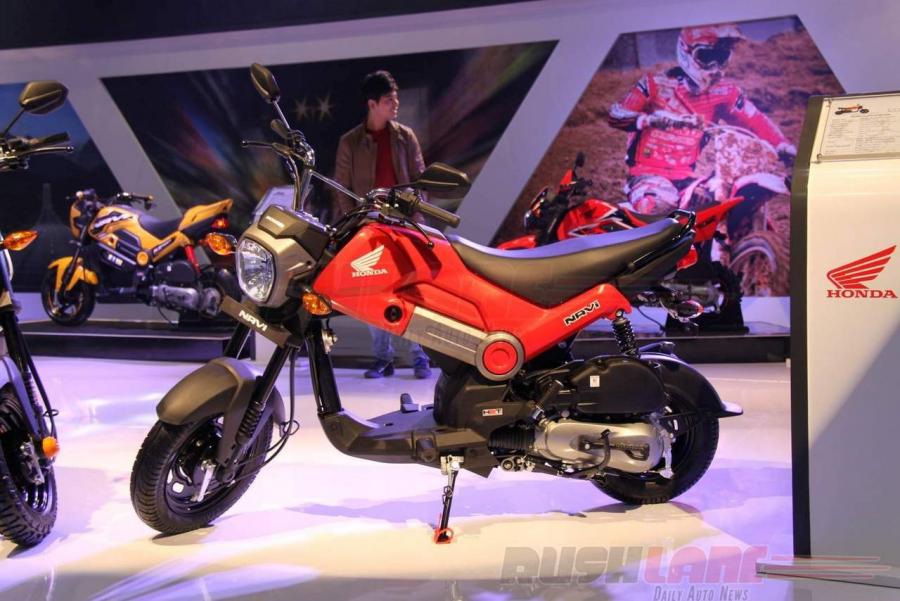 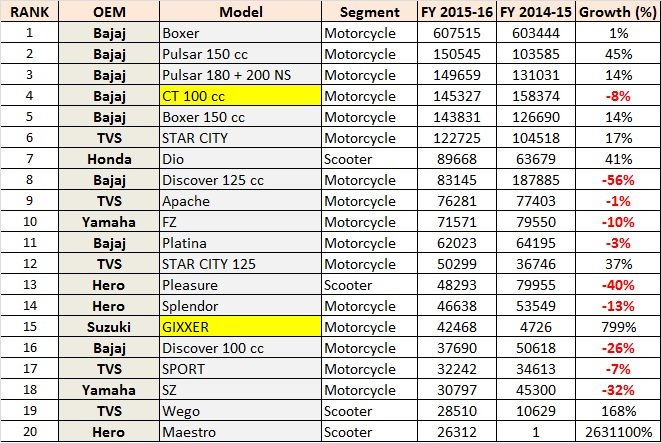 NEW DELHI: Two-wheeler industry which has been facing rough weather due to poor rural demand, showed good growth in the month of May. Most two wheelers registered a double-digit growth with sales as compared to May 2015.

The net addition in sales is still happening mostly in urban India as compared to rural India. While there is buying in rural market, experts say that sales is still replacement demand and also due to some pent-up demand. "Urban market will drive the demand in the coming quarters as the per-capita disposable income is going up as the average salary increase in about 10 percent in urban areas and the inflation has been about 5 percent," said Kumar Kandaswami, senior director at Deloitte. Clearly, the affordability for buyers is going up.

The fastest growing two-wheeler brand was the Eicher Motor-owned Royal Enfield with sales growth of 37% in May 2016. The company, which in February launched entered the adventure tourer segment with Himalayan, sold a total of 48,604 motorcycles in domestic market as compared to 35,354 units in the same month last year.

Even Yamaha India, saw a good growth in sales of almost similar 36 percent last month. Yamaha Motor reported a domestic sales to 62,748 units in May which is higher than 46,084 units sold in May last year.

Yamaha said that its increasing focus on expanding in tier II and III cities, thus reaching out to larger groups of target population, has been instrumental in boosting sales. The company added that the recently launched commuter bike Saluto RX and scooter Cygnus Ray-ZR have performed well in the month of May.

This is the second consecutive month of good growth for the industry in this financial year.

The top two motorcycle manufacturers in India, Hero MotoCorp and Bajaj, although showed growth, but it was in single digits as against double-digits for their counterparts.

The company said that market demand was expectedly subdued in May, due to the heavy retail offtake that happened in April on account of the marriage season and regional festivals in different parts of the country during that month.

However, the company expects the sales to grow in the coming months as a good monsoon, which has been forecast by Indian Meteorological Department, could lead to a change in sentiments in the rural markets and improve sales in second half of the year.

Bajaj Auto, India's second largest motorcycle manufacturer, showed a growth of 9 percent in its domestic sales. The company's total domestic sales stood at 2,04,234 units as against 1,86,614 units during May 2015.

"Going forward, we should see growth in most segments of two wheelers where some sections will do far better. Scooters and top-end of motorcycles are expected to do really well. As far as lower end of the motorcycles is concerned, if forecast around monsoon comes true then, even that segment will see growth," explained

​
June 2016 proved to be a good month for all the major two wheeler makers in India. Almost all of them registered a healthy YoY growth.

Hero Motocorp’s sales were nearly flat in June 2016 with the company registering a meagre Year-On-Year growth of 1.3% at 5,49,533 units as against 5,42,362 units in last June. The company still leads the market by a huge margin and is expecting to have a strong show during the festive season.

It was yet another month of strong growth rate for the Japanese automaker which has cemented its second position in India long back and is now in the consolidation phase. Honda clocked 4,27,384 units last month compared to 3,48,808 units in June 2015, a growth of 22.52%.

It was an excellent month for Yamaha in India as it posted a growth of 31% in domestic sales (including Nepal). The company sold 67,203 units last month as against 51,432 units in previous June.

New scooter variants and increased focus on Tier-II and Tier-II regions have been proving to be very useful for the brand.

Royal Enfield has been the fastest growing two wheeler brand in India and it kept up its momentum in June as well. The retro classic motorcycle maker registered an impressive growth of 34% in domestic sales with 49,060 units as against June 2015’s 36,597 units.

PS – Mahindra, Suzuki and Bajaj are yet to reveal sales figures for the month. Once they reveal, the post will be updated. 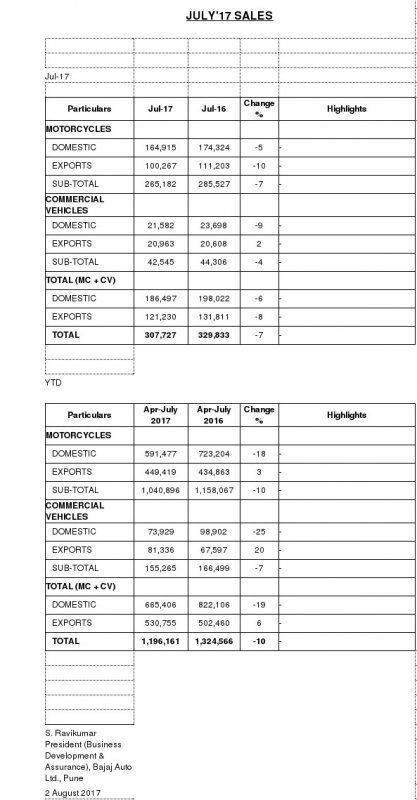 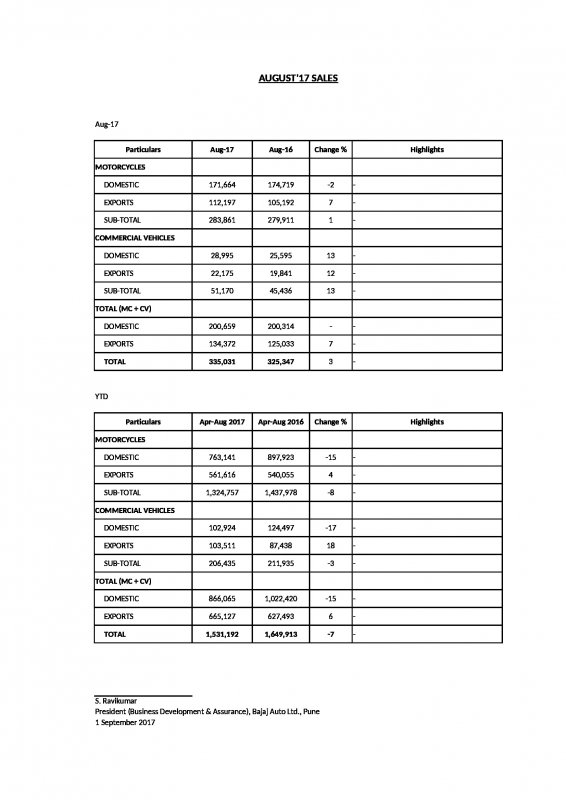 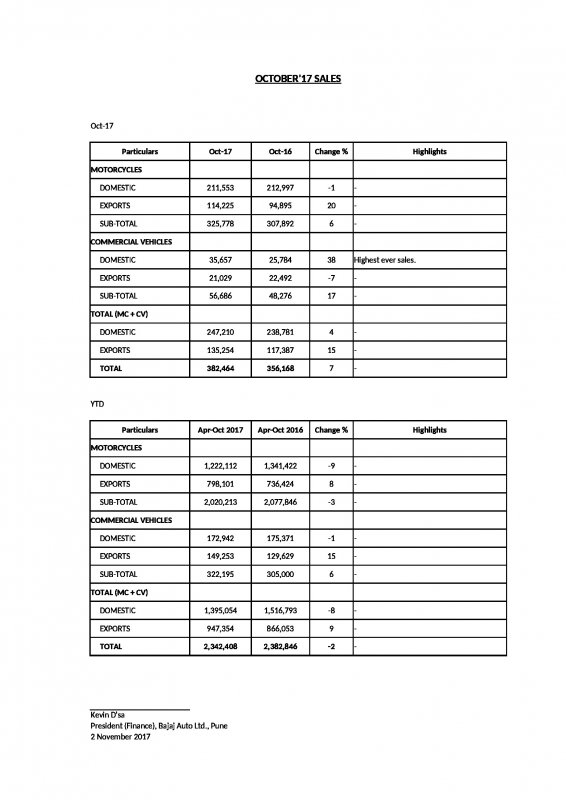 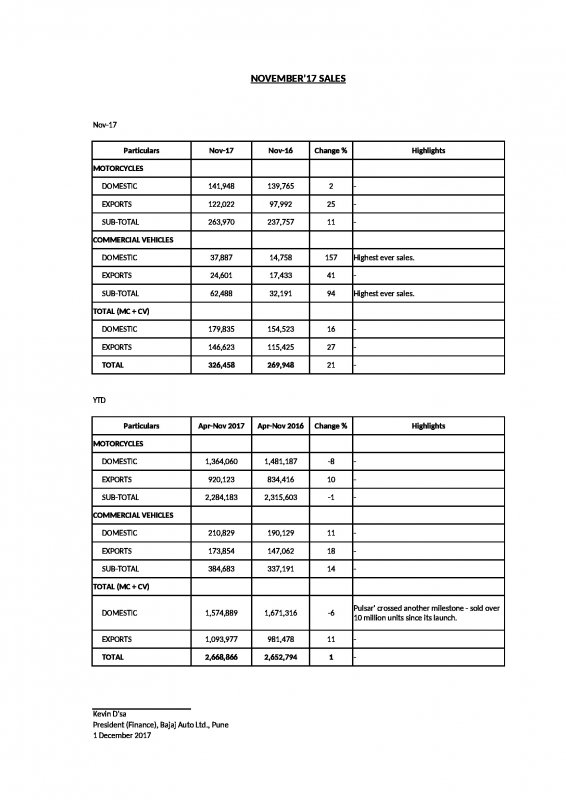 TVS Motor Company is a leading two and three-wheeler manufacturer, and is the flagship company of the USD 7 billion TVS Group. We believe in Championing Progress through Mobility. Rooted in our 100-year legacy of Trust, Value, Passion for Customers and Exactness, we take pride in making internationally aspirational products of the highest quality through innovative and sustainable processes. We endeavor to deliver the most superior customer experience at all our touch points across 60 countries. We are the only two-wheeler company to have received the prestigious Deming Prize. Our products lead in their respective categories in the JD Power IQS and APEAL surveys for the past three years. We have been ranked No. 1 Company in the JD Power Customer Service Satisfaction Survey for consecutive two years. For more information, please visit www.tvsmotor.com.
Click to expand...
Regards