BTW, Thanks for sharing this.

Can you help me with some figures?
I am lloking for production and sales figures from the time these models were introduced in India:

I know it's too much to ask for in my first post, but would really appreciate any help.

AV8TOR said:
Hi, Can you help me with some figures?
I am lloking for production and sales figures from the time these models were introduced in India:
Click to expand...
You're welcome to The Automotive India. I'll check if we could arrange some of the numbers. Meanwhile, sharing cumulative figures of last month from bike makers:

Triumph sold over 1,300 motorcycles in its first year of sales in India.

Chennai-based Royal Enfield (RE), originally a British marque from Redditch, sold a shade over 3 lakh bikes in 2014, overtaking Harley's global sales of 2.67 lakh units. Although HD motorcycles sell at a huge premium over their RE kin (HD's most affordable model in India sells for around Rs 5 lakh while RE's most expensive model comes for Rs 2 lakh), what's remarkable is the stunning turnaround by one of the world's oldest motorcycle brands. 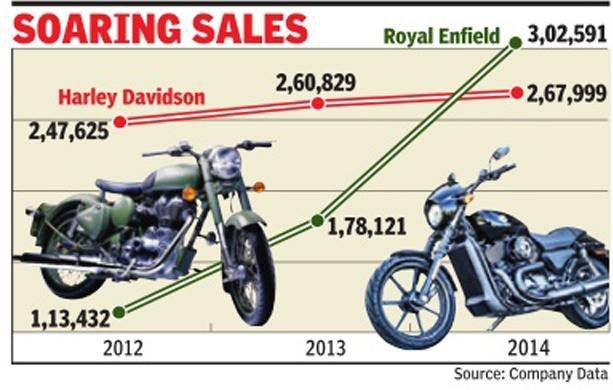 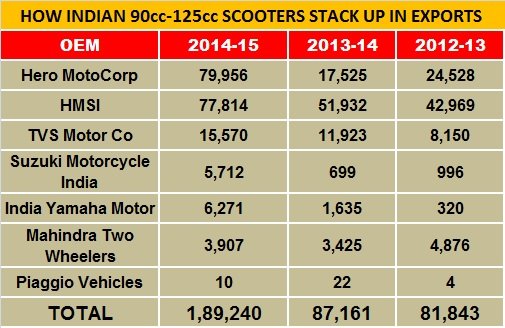 SELLS 606,744 UNITS OF TWO-WHEELERS IN SEPTEMBER

In an affirmation of the popular preference for its range of products even in a sluggish market, the company sold 606,744 two-wheelers in September 2015.

Hero MotoCorp has consolidated its share in the domestic motorcycle market to 52% and in the 125cc segment to close to 50%.

It has been an action-packed month of September for Hero. The first global manufacturing facility of Hero MotoCorp, at Villa Rica in Colombia, went on stream in early September.

This scooter made its global debut recently in Colombia (named Dash for that market), during the inauguration of Hero’s first overseas manufacturing facility.

comes with a metal body, making it sturdy and durable. Designed for a wide spectrum of customers, its array of features, such as, Under-Seat Mobile Charging Port, Remote Seat Opening, Remote Fuel-lid Opening, Pass Switch etc, provides the rider with convenience like never before for a great riding experience.

The only moped in the list, TVS XL Super, reported 6 percent de-growth in its sales. It moved one spot up this time, when compared with December 2014.

The two wheeler with maximum decline in sales is recorded by New Delhi headquartered Hero MotoCorp's 100cc motorcycle Passion. It dropped one position down to fifth spot and witnessed de-growth of 34 percent. In December 2014, it sold 84,753 units. 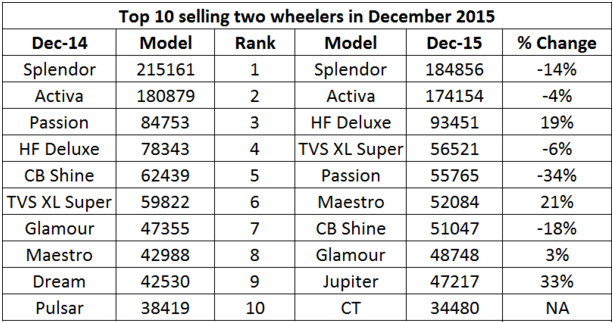 ​
Hero MotoCorp dominates with five of its models featuring in the top 10 selling two wheelers list for the month of December 2015. The sixth position in the list has been acquired by Hero Maestro. It sold 52,084 units last month, as against 42,988 units for December 2014.

The 125cc Honda CB Shine is in seventh spot after recording de-growth of 18 percent in its sales. Hero Glamour sold 1,393 units more last month when compared with corresponding month in 2014.

Apart from the moped, TVS' second two wheeler to feature in the list talked about is Jupiter, which witnessed a sales jump of 33 percent in December 2015. Bajaj CT is in the last spot after selling 34,480 units in December 2015.

Having Activa 3g, I say that the quality has came down from the older activa. The older activa used to be good. And the service here in Chennai is very bad. Not even a single complaint is rectified in the free service. Each time I say the complaint to the service advisor. He notes down the complaints. But the vehicle will come in the same state as given. And if we give poor rating during the customer satisfaction call too, nothing happens. The only thing they say is bring it sir, we will rectify it. But when we take it again, they say it is nothing and in next service they will clear it. Now fed up and started to give it to my trusted mechanic and missed the 2 free services. So there is no wonder in the sales falling down..

Hi,
Bought a Activa 3G in September and I must say the quality is very bad as compared to the previous versions. Saying this from experience. Time to look at other options in the market.

Hero MotoCorp, which saw another month of over 550,000 unit sales, is among those feeling the pressure of slowing commuter bike sales. The country’s largest two-wheeler manufacturer sold 563,348 units in January 2016 to register flat growth of 0.78 percent YoY (January 2015: 558,982). The company sales its scooter range, led by the new Maestro Edge and Duet, has helped it expand its market share.

Continuing to grow rapidly in terms of month-on-month sales, Royal Enfield registered its highest-ever monthly sales in January 2016. The Chennai-based motorcycle manufacturer recorded total domestic sales of 47,140 units in January 2016, marking a substantial jump of 67.42 percent on the 28,157 units sold in January 2015. The company had registered its previous best in October 2015, a festive month last year, when it had sold 44,138 units in the domestic territories.

A closer look at Royal Enfield’s calendar year 2015 sales highlights that it breached the 40,000 unit sales mark for the first time in August 2015, and since then it has continued to score over the 40k mark every subsequent month.

January 2016 marks the sixth month in a row that Royal Enfield has notched sales of more than 40,000 units per month. Collating all monthly sales data as reported by the company for the ongoing financial year, we glean that it has averaged monthly sales of 40,116 units during April 2015-January 2016.

According to Royal Enfield, it exported a total of 570 motorcycles in January 2016 as against 770 units exported in January 2015. The month saw a decline in exports by 26 percent YoY. However, on the cumulative front, the company registered total exports of 8,855 units during January 2015-January 2016, thereby marking a growth of 27 percent YoY.

Hero MotoCorp, India’s largest two-wheeler manufacturer, has reported sales of 550,992 units in February, marking a healthy growth of 13.66 percent (February 2015: 484,769). The company says it managed the production of as many units at its Gurgaon, Dharuhera (Haryana) and Neemrana (Rajasthan) plants despite the recent local agitation which disrupted life in the region.

“The company made up for the lost days when despatches from these plants were affected due to the blockade of the national highways and other roads,” mentions the company release.

Launching its new family scooter model under phases, Hero MotoCorp rolled out the Duet in eastern India, which helped it record increased sales of this model last month. The company says the Duet, along with the Maestro Edge, has received a positive response in many local markets, helping consolidate its position in the local scooter market.

According to industry statistics, Hero MotoCorp sold 48,002 units and 24,239 units of the Maestro and Duet models respectively in January 2016 as both these models featured in the top four bestselling scooters for the month across domestic markets.

Hero’s third scooter model, the Pleasure, which is targeted at young female riders, registered sales of 14,408 units in January.

The company plans to launch its first in-house developed motorcycle – the Splendor iSmart 110 – which was displayed at the 2016 Auto Expo along with the Xtreme 200S, Duet electric scooter concept and a street-naked motorcycle concept, XF3R.

The all-new Xtreme 200S, which will be powered by an in-house developed single-cylinder, 200cc engine, is expected to come in 2017.

On the cumulative front, the company has recorded total sales of 41,01,932 units between April 2015-February 2016, which marks an overall YoY growth of 1 percent inching closer to the 4.5 million unit sales mark for the ongoing fiscal.

Of this number, total scooter sales for the 11-month period in the ongoing fiscal stood at 25,44,757 units, which, the company says, has registered 12 percent YoY growth. According to HMSI, it has maintained its domestic market share of 26 percent consistently through the 11-month period.

The company has also received close to 900 bookings of its recently launched NAVI model(s). The deliveries for this crossover, which is manufactured at the Tapukara, Rajasthan plant, will begin in April 2016. Meanwhile, HMSI has started operations at its fourth plant in India, in Gujarat. A company release mentions that operations at the scooter-only plant are being ramped up on a daily basis. HMSI is yet to announce an official timeline for the start of local assembly operations of its globally popular twin-cylinder, 998cc adventure-touring motorcycle, Africa Twin.

The latest addition in the Apache series, the oil-cooled, single-cylinder, 198cc Apache RTR 200 4V, is said to have been receiving a positive response from customers. The Apache series (now with four variants – RTR 200 4V, RTR 180 ABS, RTR 180 and RTR 160 – on offer), which sold a total of 20,858 units in January 2016, accounts for close to 25 percent of overall motorcycle sales for the company.

According to Roy Kurian, vice-president – sales & marketing, Yamaha Motor India Sales, “This consecutive growth of 50 percent in February too, is a result of Yamaha’s innovative customer contact programs and increasing reach. At Auto Expo 2016, there was a massive customer response to the new Ray Z-R scooter and MT-09 superbike."

Talking to Autocar Professional, Kurian had mentioned that the company expects the Ray ZR to fetch sales of close to 10,000 units per month. While this will push scooter sales on one hand, the company is looking at expanding its dealership network to 650-700 by end-2016 from 500 in 2015.

Meanwhile, Yamaha is learnt to have discontinued its motorcycles in the 100cc-110cc category, and the base variants of its FZ and Fazer models. 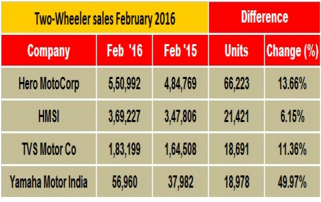 Source: INDIA SALES ANALYSIS: FEBRUARY 2016
You must log in or register to reply here.